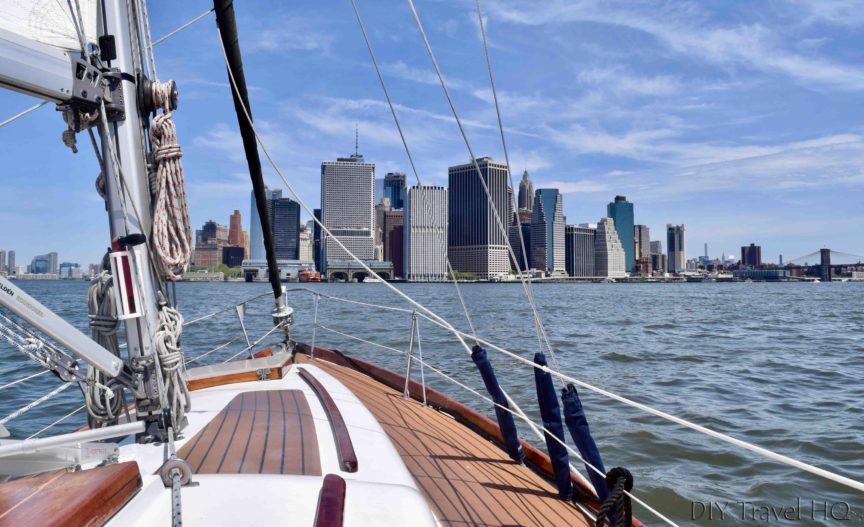 Sit back, relax & enjoy the views of the greatest skyline in the world onboard Tribeca Sailing – find out the stories & sights behind the best sailing tour in New York City.

With the wind in your hair, sailing has got to be the best way to take in the greatest skyline in the world.

We here at DIY Travel HQ like to experience the best of the best, often turning to Tripadvisor for suggestions. Tribeca Sailing is ranked as the #3 boat tour & the best sailing tour in New York City – just ask one of their recent guests, Canadian PM Justin Trudeau! 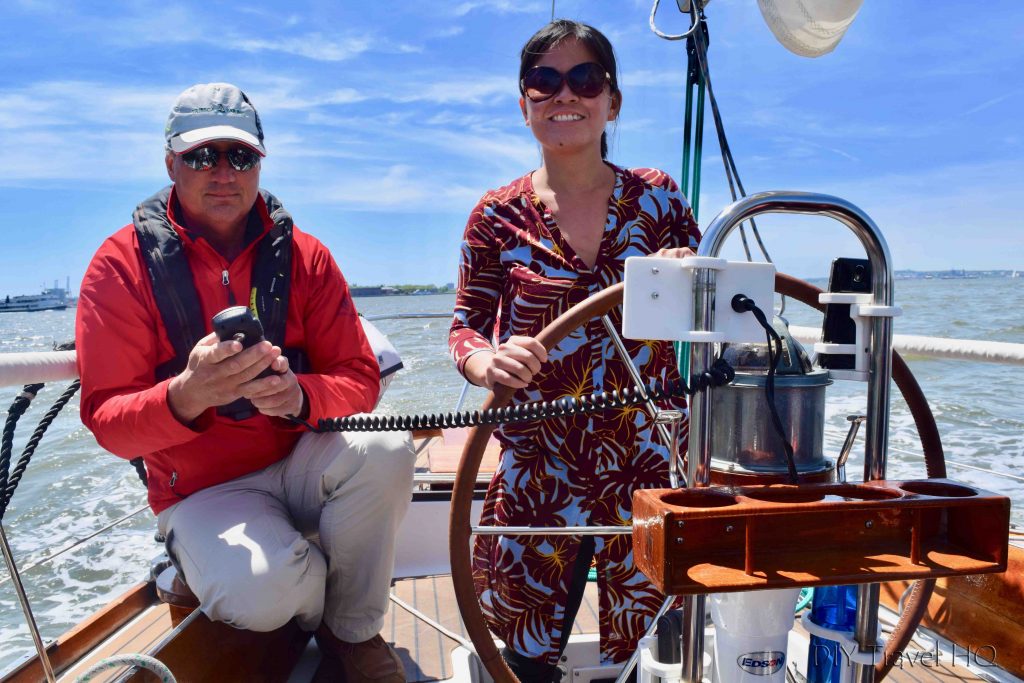 Captain David taking important calls while I take over on the wheel!

What sets Tribeca Sailing apart from the crowd is the fact that they only offer intimate sails with 6 berths max. You won’t be packed in like sardines on a large cruise or jostling for views & photos.

S/V TARA is just the right size. You can join in the conversation with Captain David at the wheel or venture onto the bow for more privacy.

Be warned though: if your partner leads you to there by the hand, he could also be going down on one knee! The front deck is a popular & lucky engagement spot, with 89 happy proposals on board so far!

With the backdrop of Manhattan & the wind in your hair, it’s definitely easy to get caught up in the romance.

Tribeca Sailing also welcomes you to bring your own snacks & drinks onboard, and nothing sets the scene like a bottle of wine & a cheese platter! 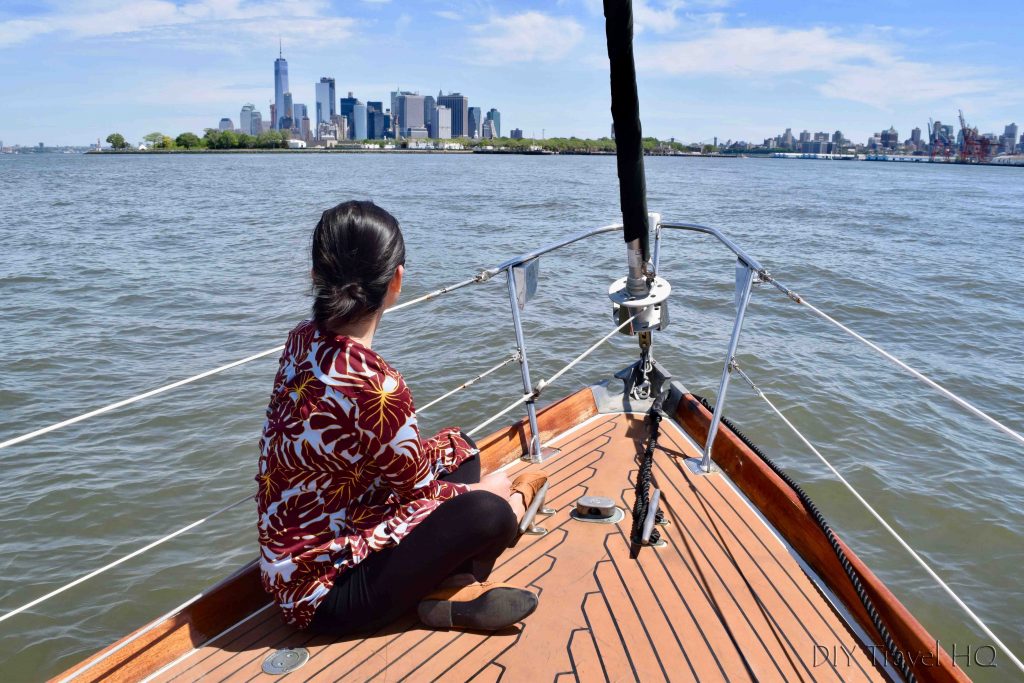 The front bow is the perfect spot for a BYO picnic onboard Tribeca Sailing!

Our sail was at 10:00am in the morning – it was nothing against drinking before noon but a lack of planning that saw us sailing empty handed. We really regretted it, so be sure to pack a picnic and make the most of your day out with Tribeca Sailing.

Tribeca Sailings departs from North Cove Marina in Battery Park City, where you will be met by Captain David.

We were joined on our sail by a mother & daughter team from Washington DC & Kansas City, celebrating Mum’s bday on a weekend in New York City. That’ll be one to remember!

As soon as we set sail, Captain David gave us a safety briefing. It was also reassuring to hear that he’s never had anybody go overboard in his 5 years sailing on S/V Tara.

Captain David is a gentleman of the seas. He made us feel completely at ease on the water & in his company. As a native New Yorker, he knows the lay of the land like the back of his hand. Captain David is full of insight – he loves sharing the history of the Big Apple as well as personal experiences.

Our wonderful time with Tribeca Sailing was as much about seeing the sights of New York City as it was hearing the stories of Captain David. 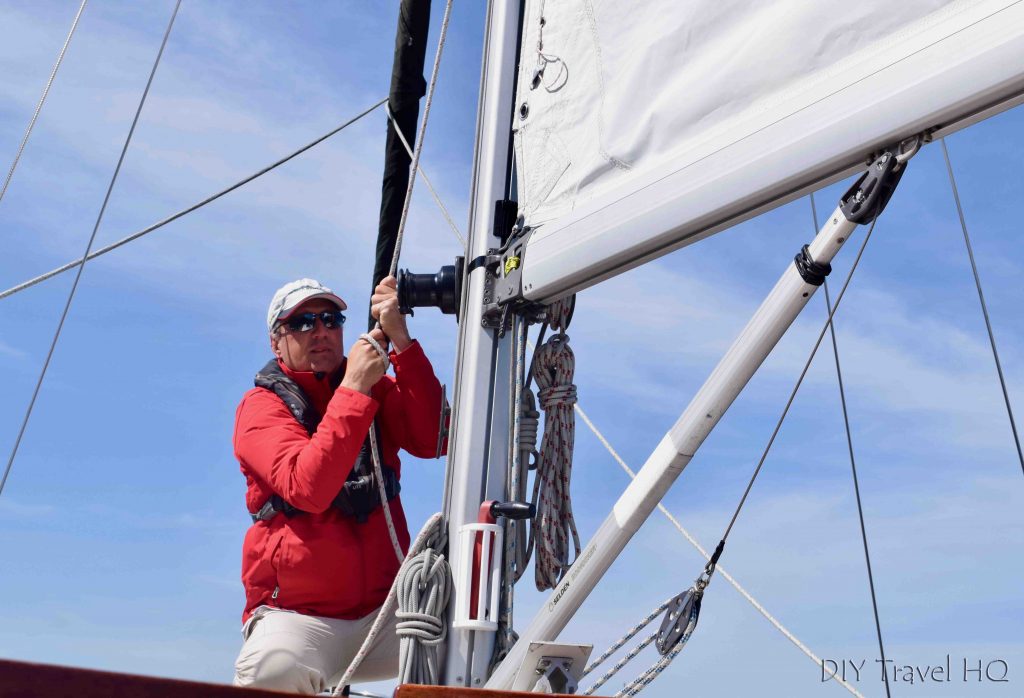 S/V TARA is a beautiful vessel – Captain David calls her the prettiest girl in New York Harbor & that is hard to argue with. She is only used for Tribeca Sailing tours.

TARA is a 1964 Hinkley Custom Pilot 35 sailboat, one of only 117 ever built. She is in fine condition & has clearly been cared for with love. 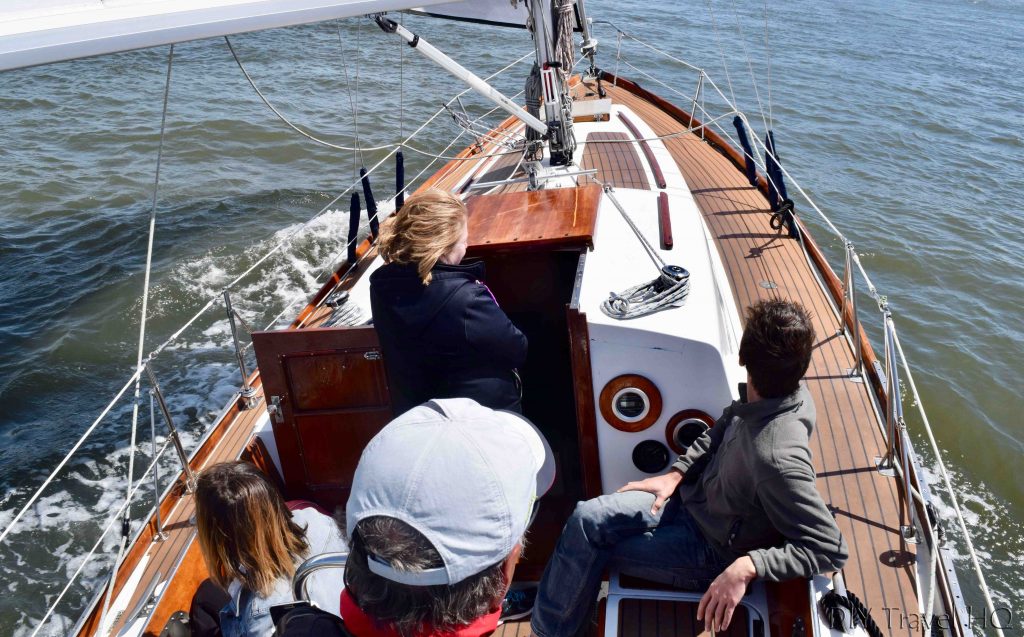 One of the first spots Captain David pointed out was where Captain Sully landed US Airways Flight 1549 in the Hudson River.

We wouldn’t be sailing in that direction but just being on the water gave us a sense of what that might have been like. 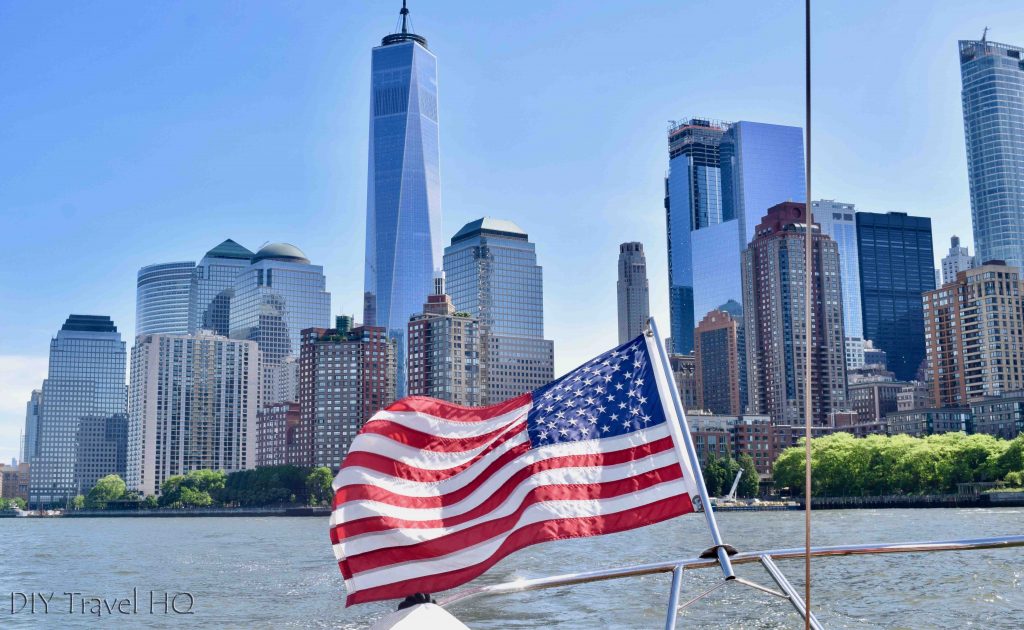 Remembering Sully as we set sail from New York Harbor

Directly across the Hudson River from North Cove Harbor is the impressive skyline of Jersey City, that could soon rival Manhattan. It’s an important financial hub that’s developed into one of the largest CBD’s in the US today.

From the boat, you’ll be able to see the famous Colgate Clock – it’s widely-known as the world’s largest clock but we did a little research & it’s now dropped down to the #4 spot!

The impressive skyline of Jersey City

Next up is Ellis Island, the gateway to the US for over 12 million immigrants from 1892-1954. Almost half of the US population today descends from these immigrants.

You can visit Ellis Island, which is best combined on a day trip with the nearby Statue of Liberty.

Ellis Island in the distance

Lady Liberty is one of the highlights of the tour with Tribeca Sailing. We got to see her from so many different angles, unobstructed – this is a moment when you’ll feel really glad you’re not on one of those massive ferries!

It was amazing to get up-close & personal to this icon of freedom, but our favourite view was its side profile, from a distance, with Manhattan in the background. 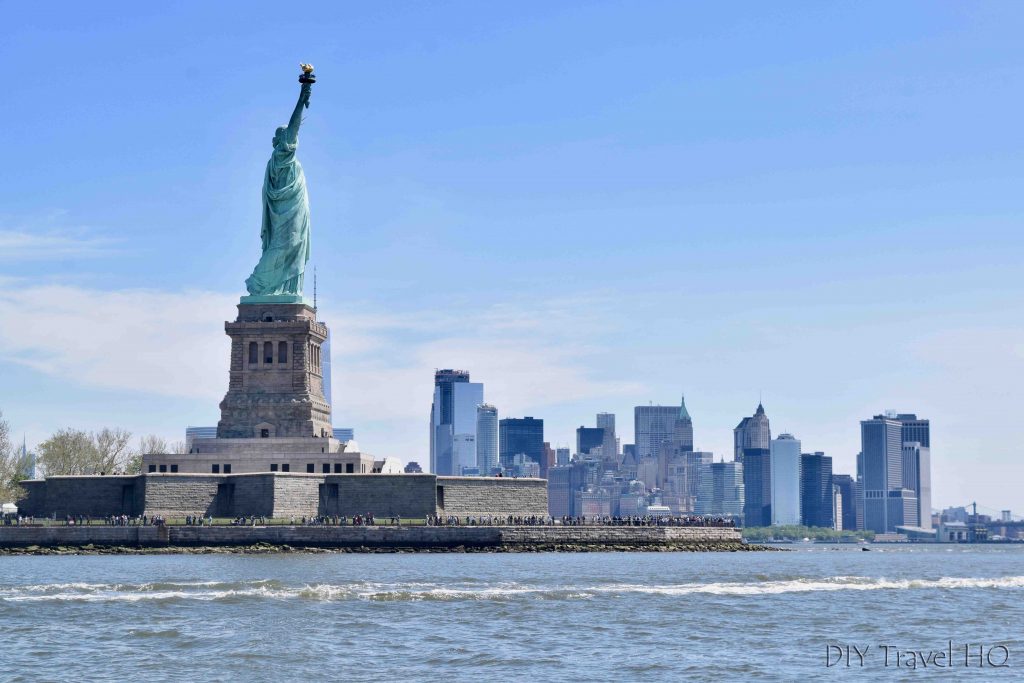 The Statue of Liberty watches over Manhattan

The Statue of Liberty was a gift from France in 1886, commemorating its alliance with the US during the American Revolution.

Did you know that it was made from copper? Or that its face is more than 8 feet tall? Captain David knows so much about the history & artistry behind Lady Liberty, it’s fascinating to learn about it while you’re looking at her at the same time. 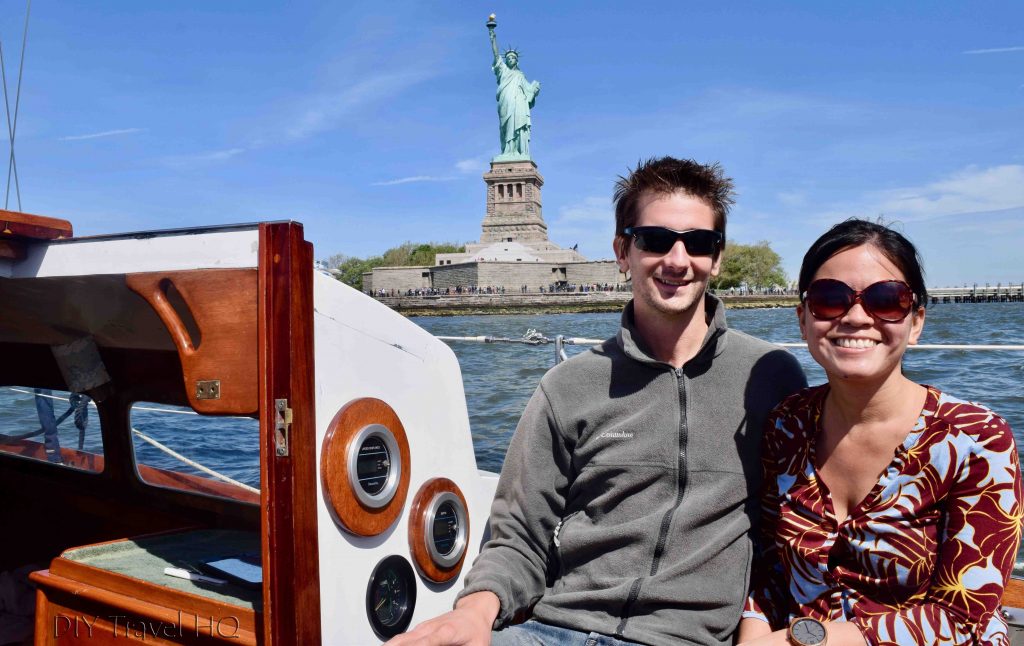 We then set sail towards Governors Island, a 172-acre green oasis in the heart of New York Harbor. Its name comes from the British colonial era when the island was reserved exclusively for New York’s royal governors.

It was used by the army over the years & on the Tribeca Sailing tour, we were able to see some of the old barracks up close.

Today, Governors Island is open to the public on weekends during the summer. It hosts festivals & concerts, and it also looks like a beautiful place to go bike-riding or have a picnic.

As S/V TARA winds her way back to the North Cove Marina, we are treated to some truly spectacular views of the New York City skyline.

From the glass reflections of the Freedom Tower (aka One World Trade Centre) to the neo-Gothic style of the Woolworth Building, up ahead are some of the tallest skyscrapers in the world.

You can even sneak a peek at the Chrysler Building & Empire State Building in the distance.

A don’t forget to check out Brooklyn Bridge & Manhattan Bridge to your right! 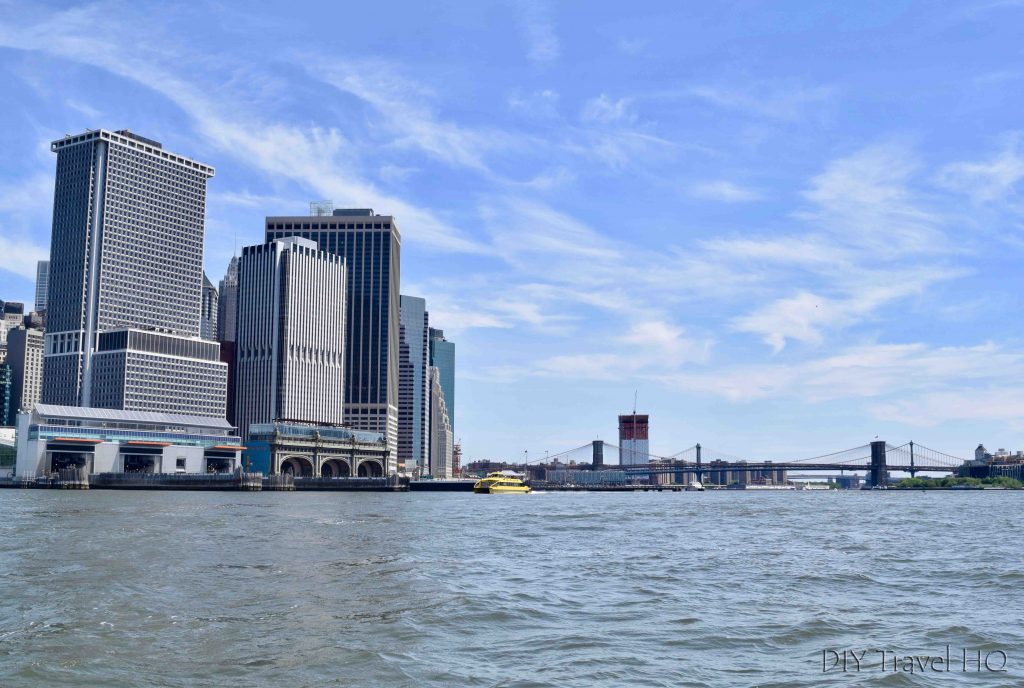 Brooklyn & Manhattan bridges in the distance

Docking back at North Cove Marina, we said our goodbyes to S/V TARA & Captain David with big smiles & happy hearts.

Whether you’re a local or traveler, a tour with Tribeca Sailing offers a new perspective of the Big Apple – it will make you fall in love with New York City all over again! 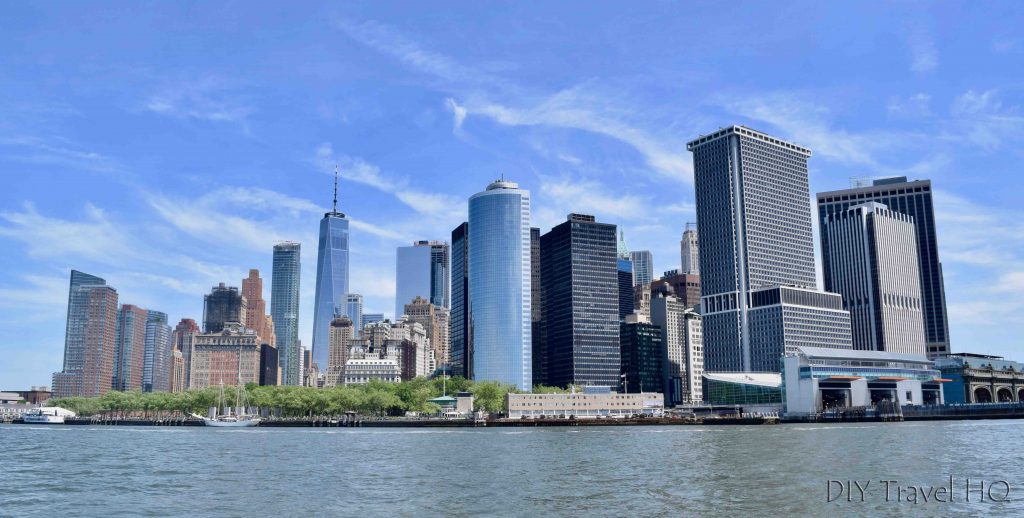 Manhattan truly is the greatest skyline in the world

Things to do in Lower Manhattan

A tour with Tribeca Sailing can easily be combined with visiting some of the best attractions in Lower Manhattan:

If you are visiting for an extended time, check out our guide to 7 Days in New York City to help you plan your trip. 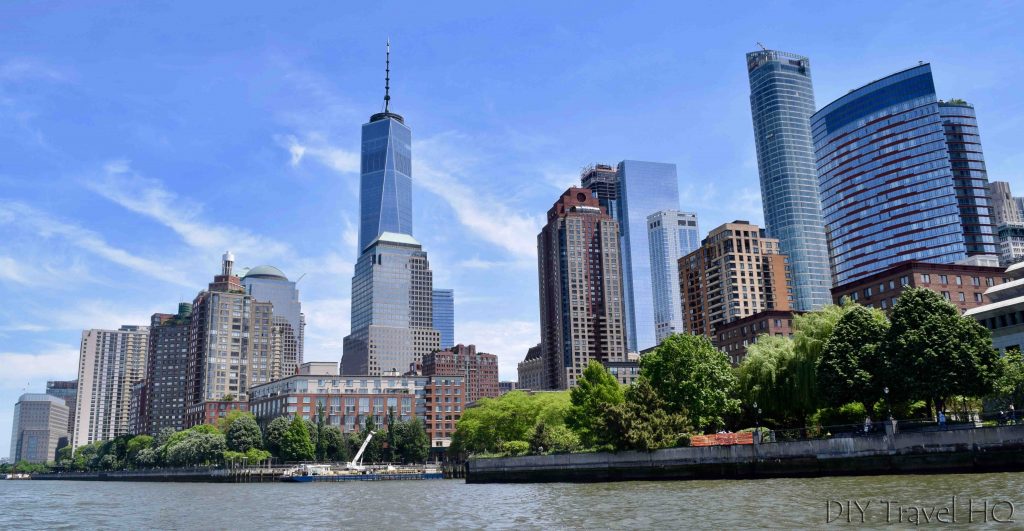 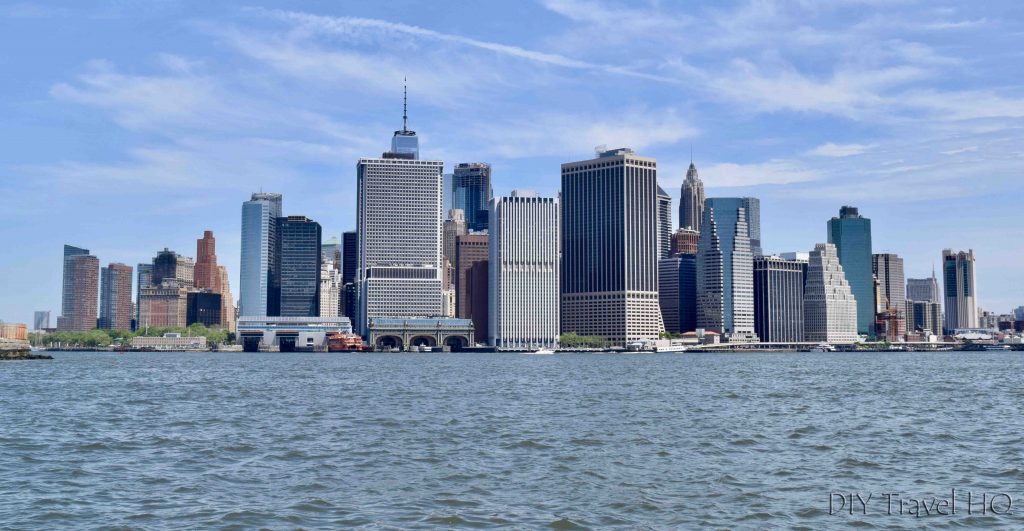 Concrete jungle where dreams are made of… when are you visiting NYC?!

*** The Final Word: Take a tour with Tribeca Sailing to see the best views of New York City! ***

Where in the world have you been sailing?

* We received a complimentary tour with Tribeca Sailing, thank you to Captain David for hosting us. We only recommend fun, value for money activities & experiences that we believe our readers would enjoy. As always, all opinions & photographs are our own.