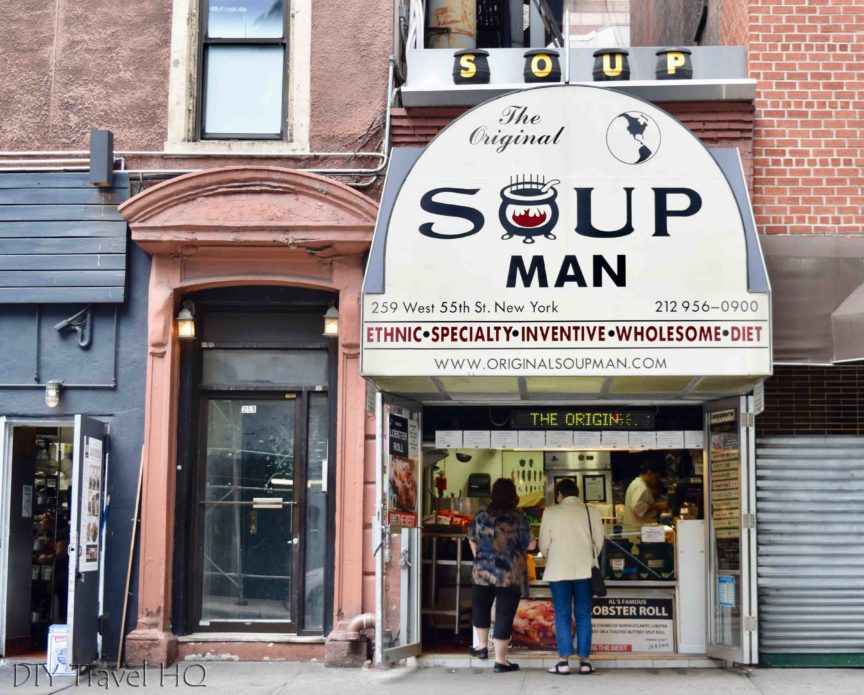 Jump onboard the NYC TV & Movie Tour for a front row seat to the best filming locations in the Big Apple – find out what to expect with On Location Tours!

On Set in NYC

Forget Los Angeles, London or Paris – New York City is undoubtedly the most filmed city in the world. From Times Square to Wall Street, we here at DIY Travel HQ have seen NYC so many times on tv & film that we could recognize it anywhere – wouldn’t you agree?

And once you set foot in Manhattan, it really feel like being on a real-life movie set.

Everything may be new but it looks familiar at the same time – that’s because every corner of NYC has probably been on the big or small screen. You just might not be able to put your finger on it… 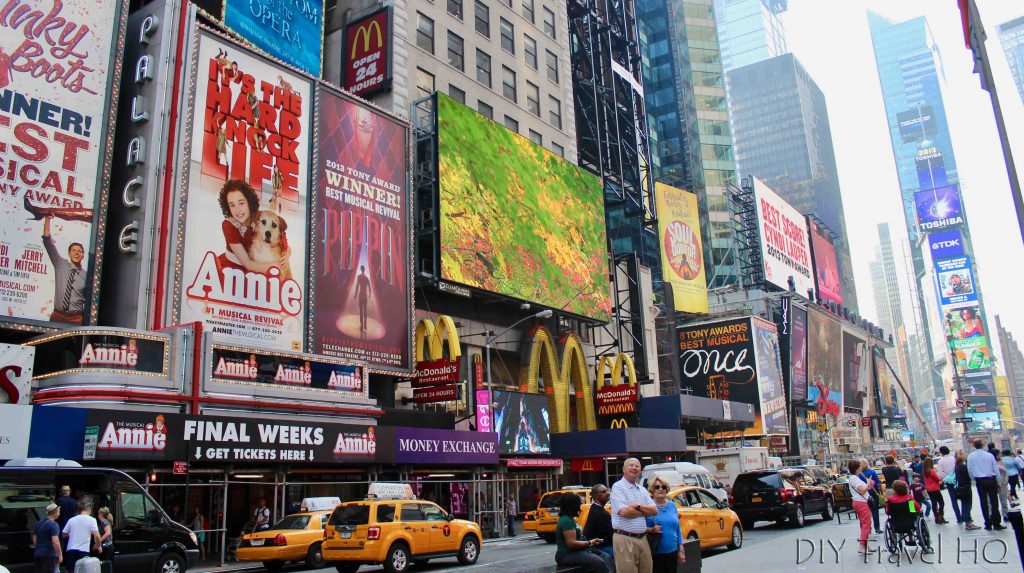 How many times have you seen Times Square in the movies or tv?!

On Location Tours: How It Works

That’s where On Location Tours steps in, one of the biggest & best TV & movie tour companies in the world. They operate a bunch of tours in NYC (& Boston), including the popular NYC TV & Movie Tour.

Onboard a luxury coach bus, guests ride around the streets of New York City, while a licensed guide points out sites of interests & what has been filmed there along the way. All the while screens on the bus play video clips of what you’re looking at…

So you can see Central Park on film while you’re driving pass it at exactly the same time! It’s very cool 🙂

On Location Tours also run TV & Movie tours in Boston. While you are in Beantown, why not stay awhile & check out these 5 amazing day trips from Boston!

After the NYC TV & Movie Tour, why not head back to Central Park?!

The licensed tour guides that work for On Location Tours are all local actors & actresses, who love to share their passion & insights.

Our guide Scott was Chuck Bass’ hands in Gossip Girl & he also doubled as Spiderman for photo shoots – along with speaking roles of course! Studios save big money by not having to pay lead actors & actresses for scenes that don’t involve their face… how devious, but clever!

Scott shared a lot of behind-the-scenes secrets like this that made the tour really enjoyable & interesting. We’re definitely going to look at tv shows & movies in a different light! 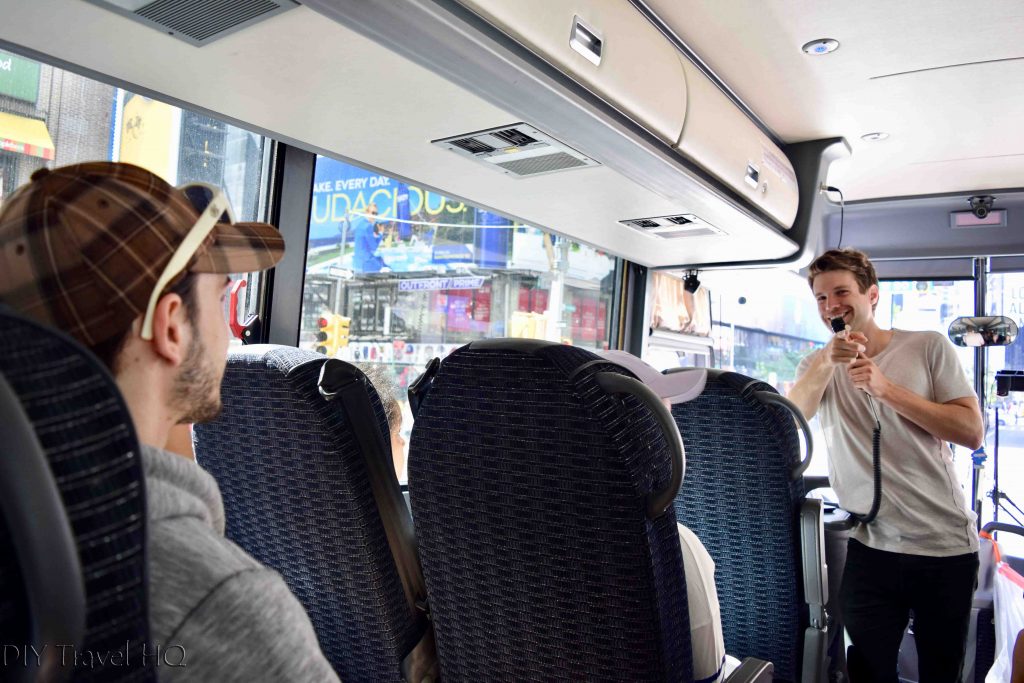 On Location Tours: On & Off the Bus

While most of the time is spent on the bus, there are 3-4 stops where you get the chance to hop off for fresh air & photos.

Left, right & centre, there’s a tv or film site in every direction you look in NYC… here’s a selection of some of our favourites! 🙂 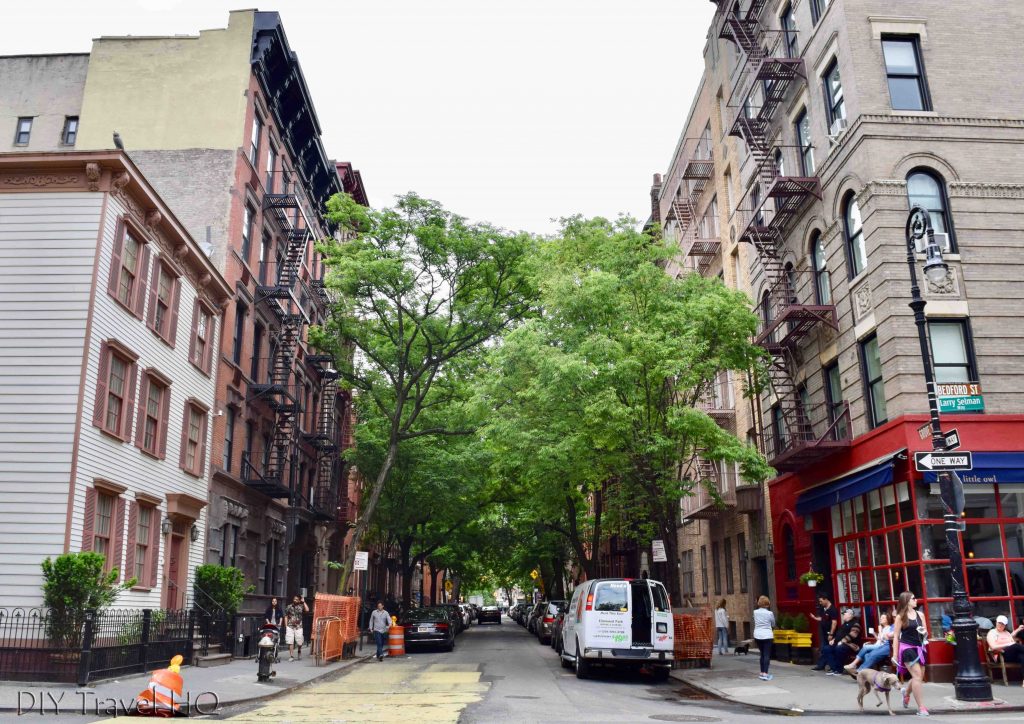 Does this look familiar… read on to find out more!

This retro 1950’s restaurant has appeared in New Year’s Eve and American Idol, thanks to an employee-contestant.

It’s one of the best themed restaurants in New York City, with an all-singing waitstaff, right in the heart of the Theatre District on Broadway. 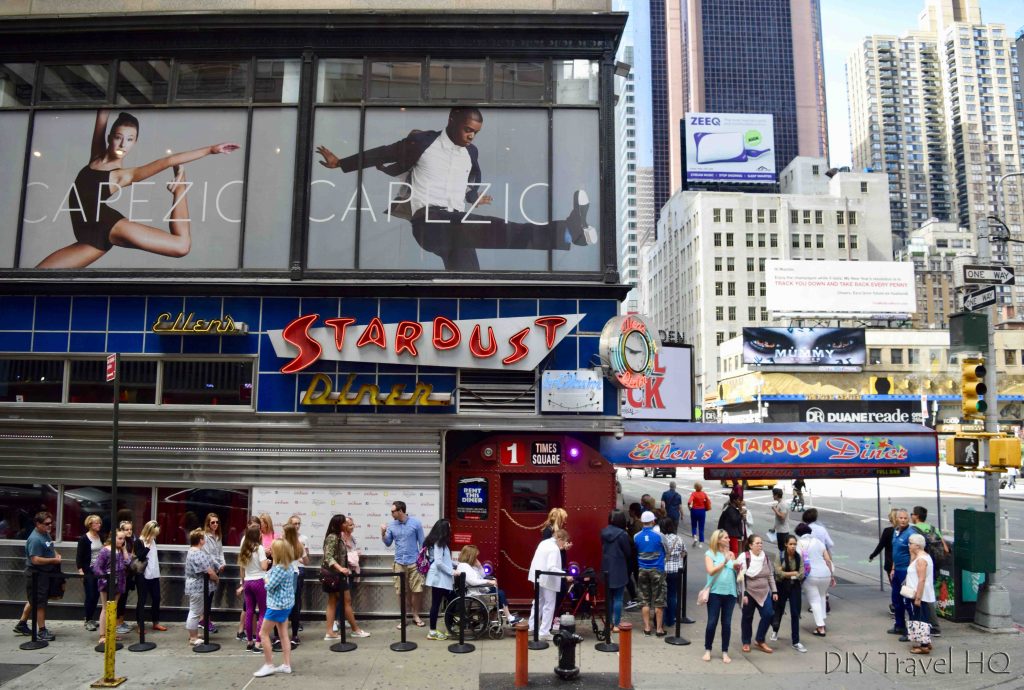 No movie tour of NYC is complete without passing by Tiffany’s & Co. on 5th Avenue – this is where Audrey Hepburn window shops while eating breakfast, returning later with Fred, in Breakfast at Tiffany’s.

It’s also where McDreamy pops the question to Reese Witherspoon in Sweet Home Alabama, waving his hand around the store & saying “Pick One!” 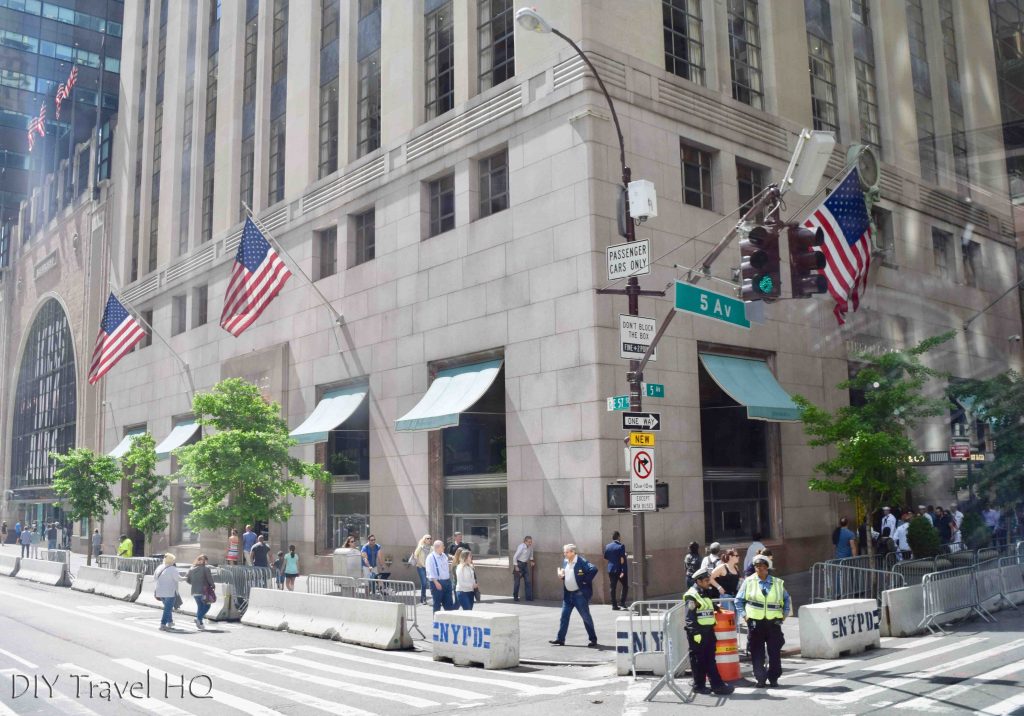 The one & only Tiffany’s on 5th Avenue

30 Rockefeller Plaza is home to NBC Studios – Saturday Night Live, The Tonight Show Starring Jimmy Fallon & The Late Show with Seth Meyers are all filmed here, amongst many other programs.

In Sleepless in Seattle, Meg Ryan has a doomed Valentine’s Day dinner with Bill Pullman here at the Rainbow Room restaurant on the 65th floor. She then rushes out of 30 Rockefeller Plaza, heading to the Empire State Building to meet Tom Hanks & his son.

Other movies filmed here include:

The Atlas Statue on 5th Avenue is also seen in the opening credits of 30 Rock. 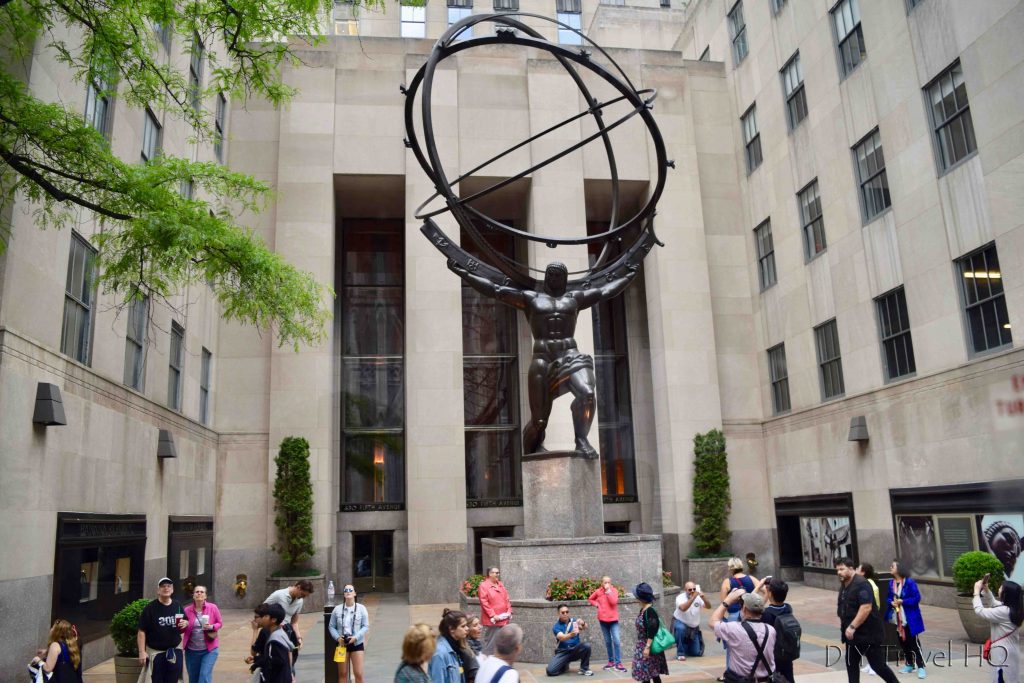 The Atlas Statue in front of Rockefeller Center

Washington Square Park is shown many times in I Am Legend, as Will Smith lived directly across the street. Look out for it in the big action scene at the end of the film.

It’s also a popular TV location and can be seen in Glee, Elementary & Masters on None.

In Ghostbusters II, a giant ghost goes through Washington Arch. 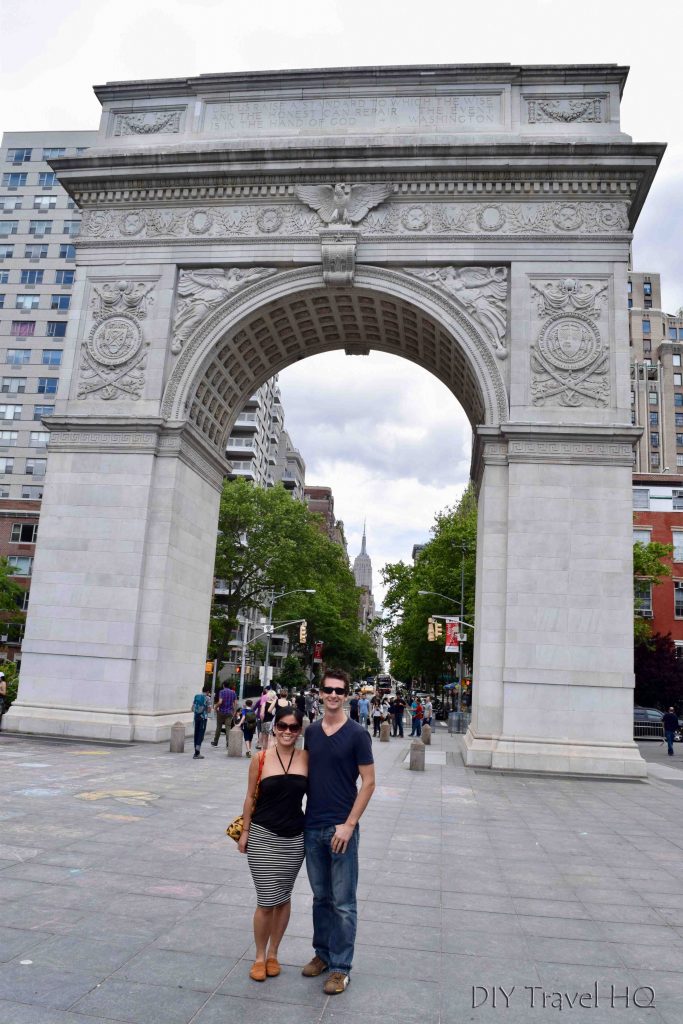 You have time for photos in front of Washington Square Arch!

The exterior of this iconic fire station is famous for its role in Ghostbusters – apparently Dan Ackroyd knew the area & simply liked the building!

However, the inside scenes were shot in an Los Angeles studio & an abandoned LA fire station.

Hook & Ladder 8 Firehouse can also be seen in Hitch & an episode of Seinfeld. 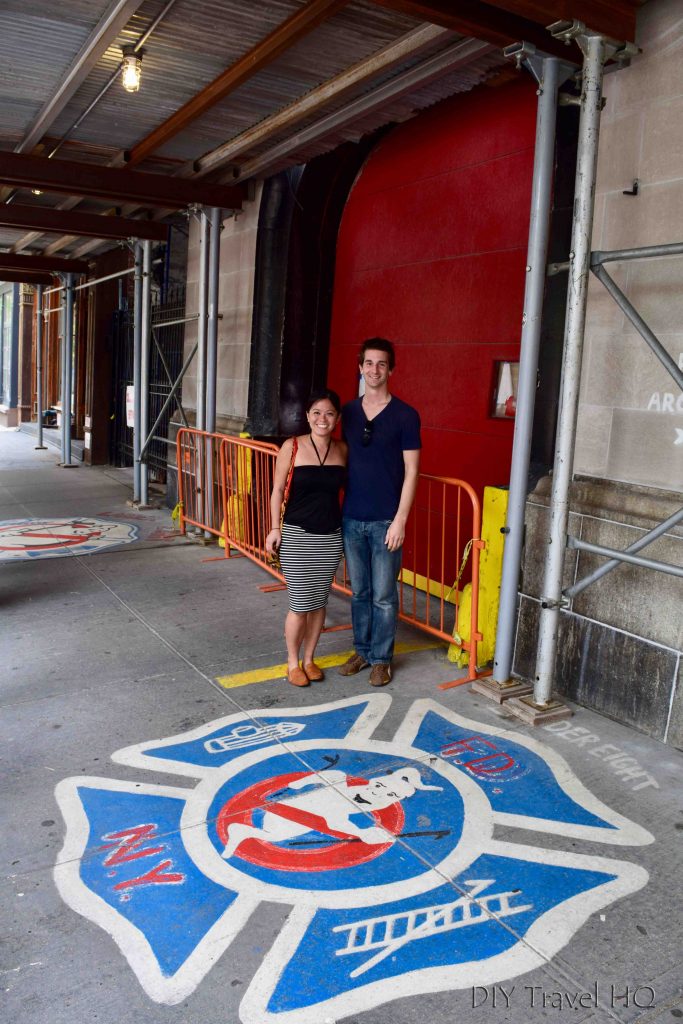 The Friends building is in Greenwich Village – this is where you would find Monica & Joey’s apartments though Rachel, Phoebe, Ross & Chandler have all lived there at some point or another.

Phoebe mostly lived by herself, 4 blocks away at her grandmother’s rent-stabilised apartment. Paying $200 a month in rent, she could afford to spend all her time singing Smelly Cat at Central Perk… which is conveniently located on the ground level of the Friends Building.

In reality, it’s called Little Owl – it’s painted red (not green) & is more of a Mediterranean restaurant than a coffee house…

The Friends Building & Central Perk in the West Village

McGee’s Restaurant & Pub was the inspiration for McClaren’s Pub in How I Met Your Mother. This is where Barney, Lily, Ted, Marshall & Robin loved to share fond memories over a beer or three.

The writers of the show use to eat & drink here all the time while they were working on the Late Show with David Letterman, just around the corner.

Fan’s of How I Met Your Mother will recognise the padded booths & muraled walls at McGee’s. 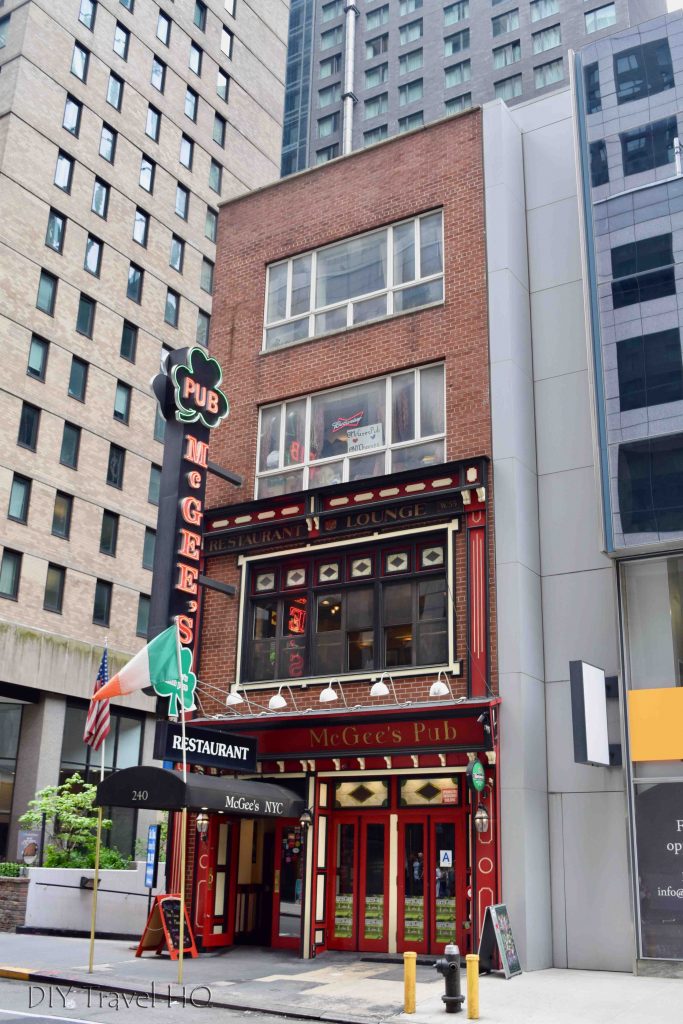 Across the street from McGee’s Restaurant & Pub is The Original Soup Man – the owner Ali “Al” Yeganeh was the inspiration for the Soup Nazi in Seinfeld.

By all accounts, his reputation was not exaggerated!

In the earlier Sleepless in Seattle, a magazine writer pitches a story that sounds remarkably similar to the Soup Nazi: “This man sells the greatest soup you have ever eaten, and he is the meanest man in America. I feel very strongly about this, Becky; it’s not just about the soup.”

McClaren’s Restaurant & Pub & The Original Soup Man are located on the same street. The NYC TV & Movie Tour ends here at lunchtime & what better to end than with a drink or meal at one or both of these iconic locations?! 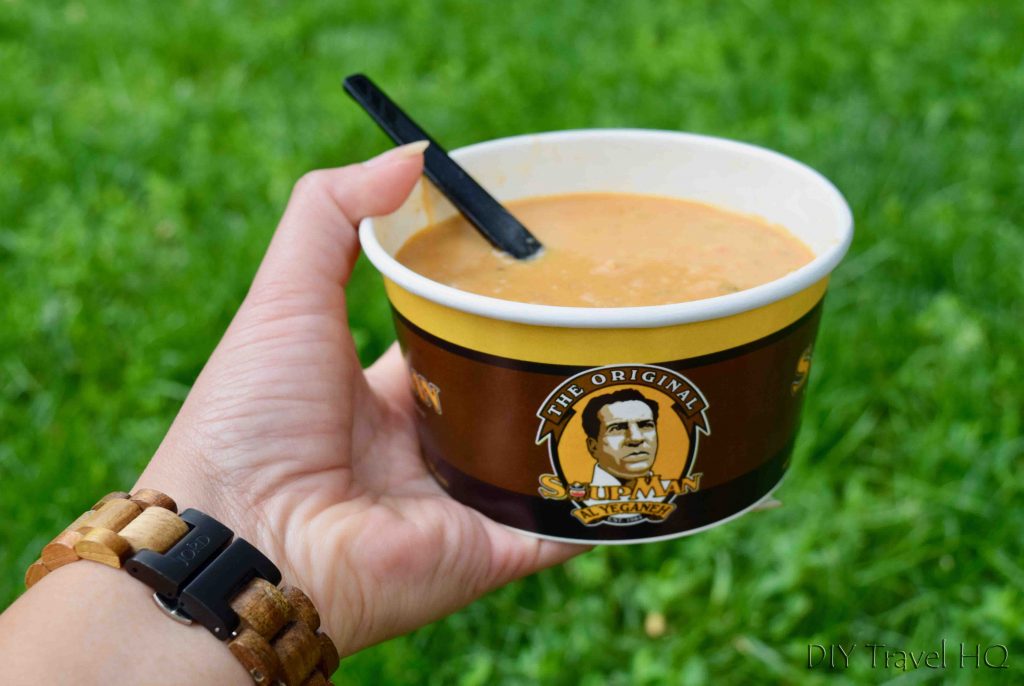 Ending the On Location Tour with Lobster Bisque from the Soup Nazi!

*** The Final Word: The NYC TV & Movie Tour with On Location Tours is the perfect way to start your visit to the Big Apple! ***

Have you visited any famous tv or film locations around the world?

* We received a complimentary NYC TV & Movie Tour, thank you to On Location Tours for hosting us. We only recommend fun, value for money activities & experiences that we believe our readers would enjoy. As always, all opinions & photographs are our own.