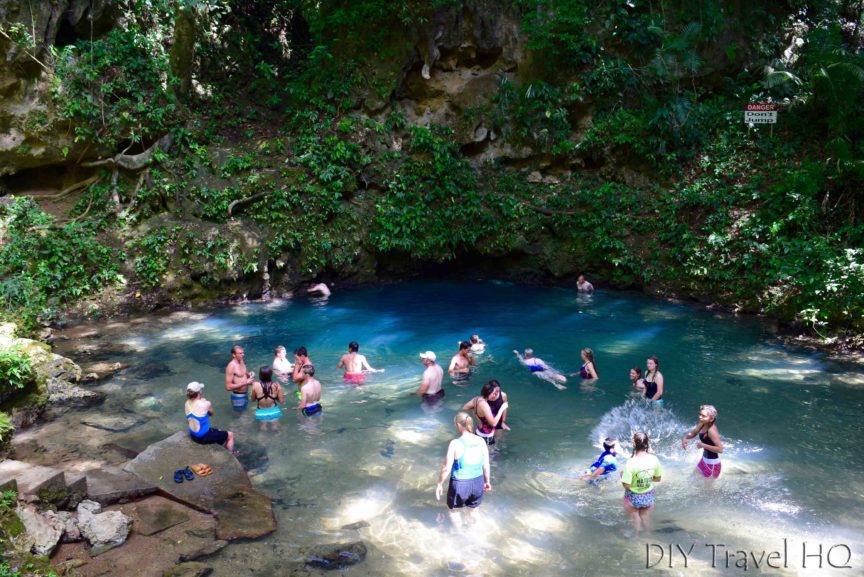 No this is not THE Blue Hole – that giant sinkhole is off the coast of Belize City.

This Blue Hole is inland, located 19 km south of Belmopan.

Exploring it is a lot less expensive & you don’t need any diving experience whatsoever – we here at DIY Travel HQ list it as one of the top places to visit in Belize.

The 575-acre St Herman’s Blue Hole National Park refers to a cave & a pool, connected by an underground stream.

* Don’t forget to purchase travel insurance before any trip to Belize. We’ve been using World Nomads for over 10 years – it’s the best-value provider we’ve found & we’ve also never had any issues on the few occasions we’ve had to make a claim. 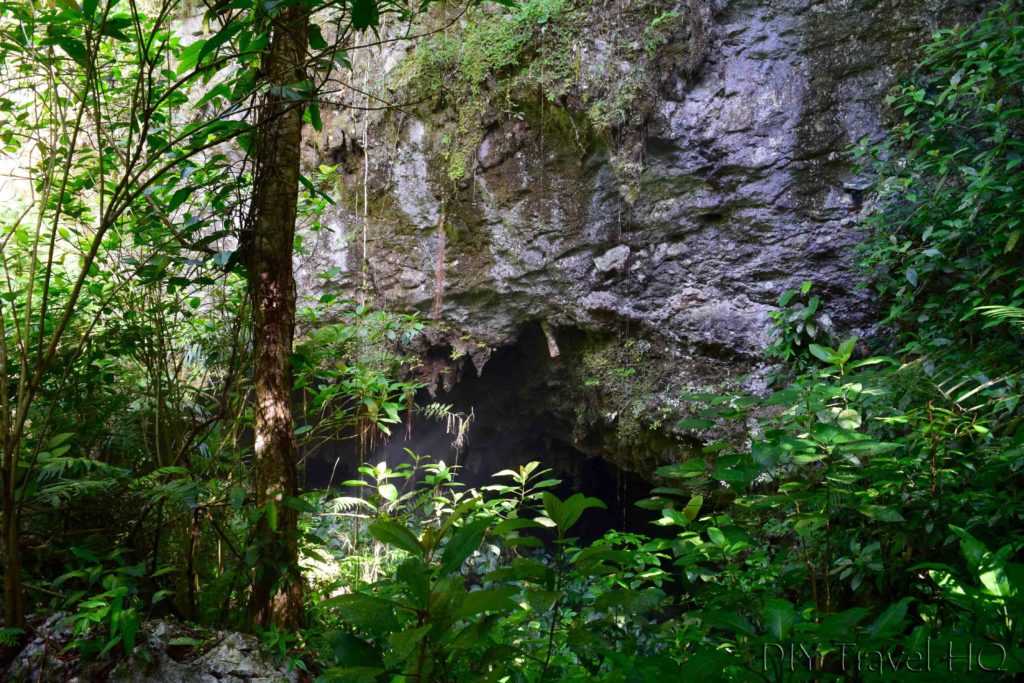 The entrance to St Herman’s Cave

The entrance to St Herman’s Cave can be reached via a short trail from the visitor centre. Bring a torch light because from here, you head into the cave in complete darkness.

Walk on steps cut by the Maya, following an underground river for 200 metres.

That’s as far as you can go independently – to go any further you need to take a guide.

We didn’t do a tour as we only reached the cave just before closing time, but apparently it is quite impressive.

With a guide, you can explore St Herman’s Cave completely, seeing beautiful limestone formations & Mayan artifacts along the way, before floating back to the entrance on a tube. 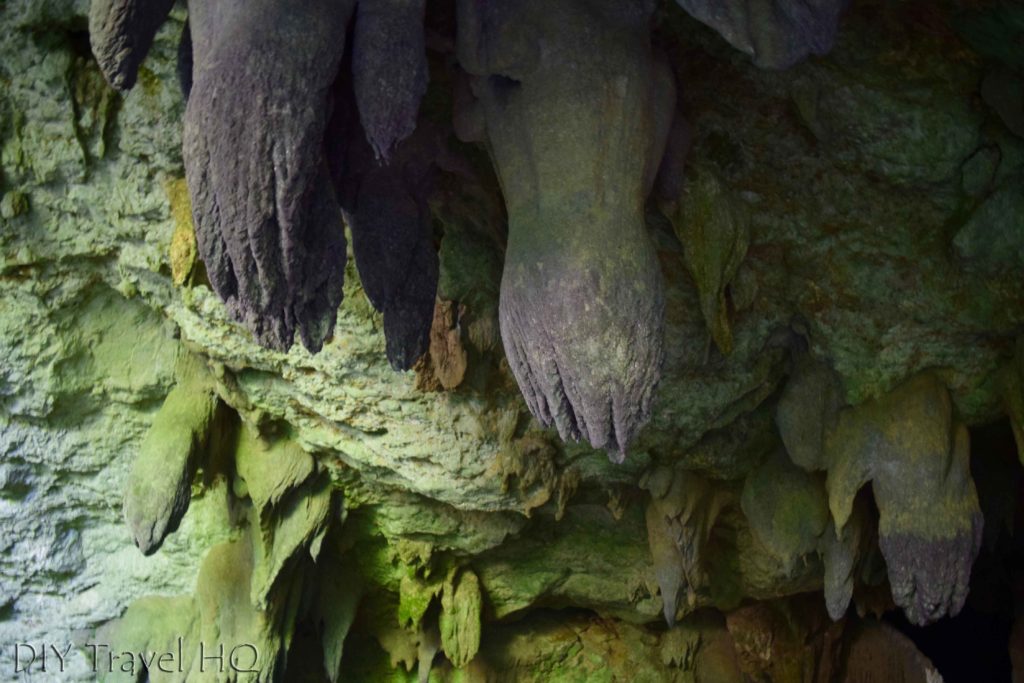 Incredible formations at the entrance to St Herman’s Cave

The Blue Hole is on the side of the park. It’s linked with St Herman’s Cave by a mosquito-friendly, jungle trail – trekking takes 45 minutes (wear repellent!) or if you have a car, drive between the 2 sites for 1 minute on the Hummingbird Highway.

The Blue Hole is a cenote that was created from the collapse of an underground limestone cave. 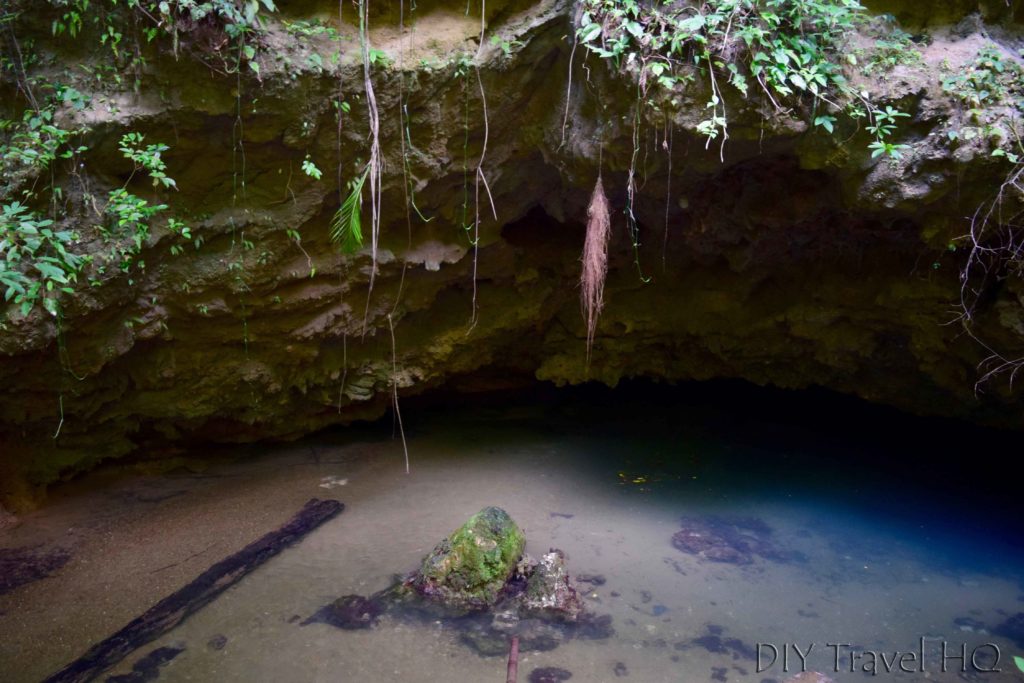 Visit the cave first & then jump into the pool for a cool, refreshing & well-earned dip. 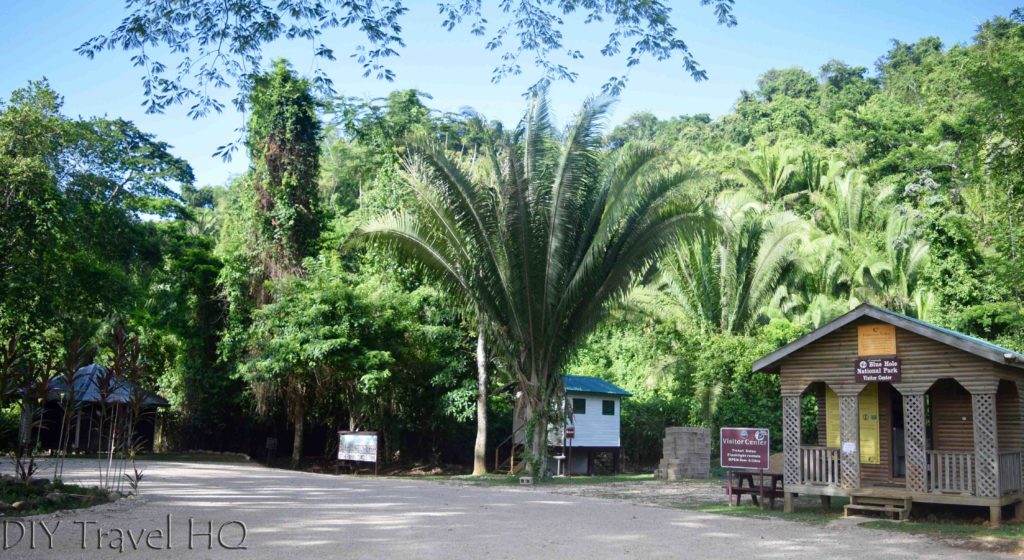 We visited the park in transit between San Ignacio & Dangriga, with our backpacks. There’s nothing to see or do in Dangriga but we were forced to stay the night.

There are two entrances to the National Park – one is near St Herman’s Cave & the other is near the Blue Hole.

We got off the bus at the Blue Hole entrance & then had to walk through the jungle trail with our backpacks to St Herman’s Cave.

We definitely don’t recommend doing it this way. 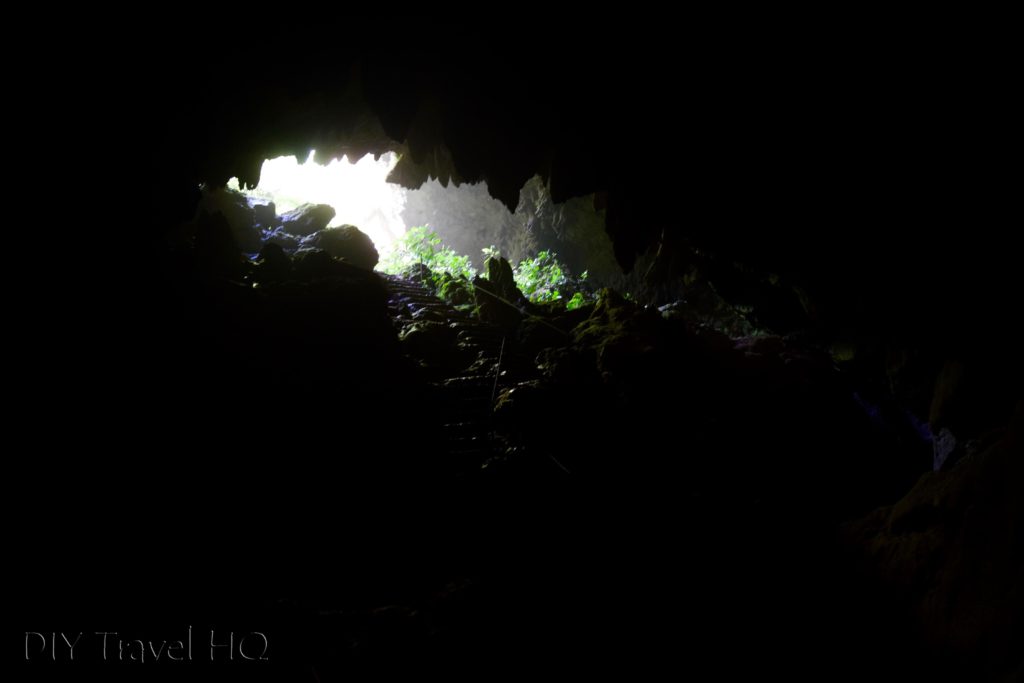 Blue Hole National Park is best visited as a day trip from San Ignacio or Belmopan, so you are free to enjoy the day without the hassle & worry of your bags.

If you must visit in transit, start the day early so you have enough time to visit both sites – keep in mind that you have to take 2 buses to take + waiting time.

Get off the bus at the visitor centre at the main entrance near St Herman’s Cave & leave your bags there.

Visit the cave first, then the Blue Hole, before returning back to the visitor centre to pick up your bags.

You could try hitchhiking on the road to save you time & energy between the 2 sites. 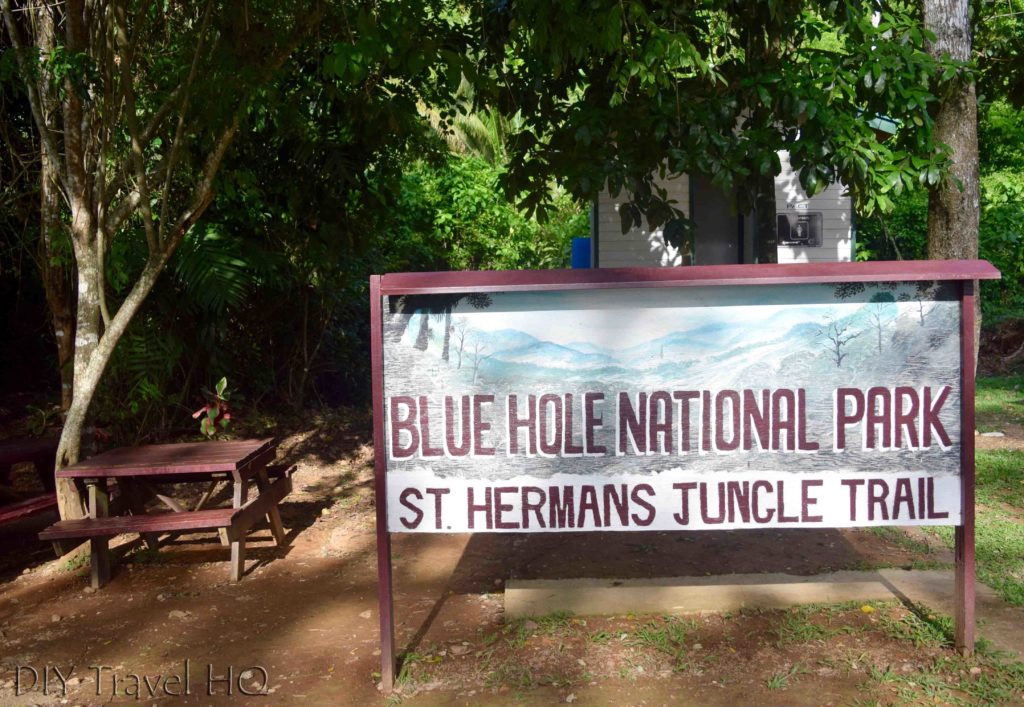 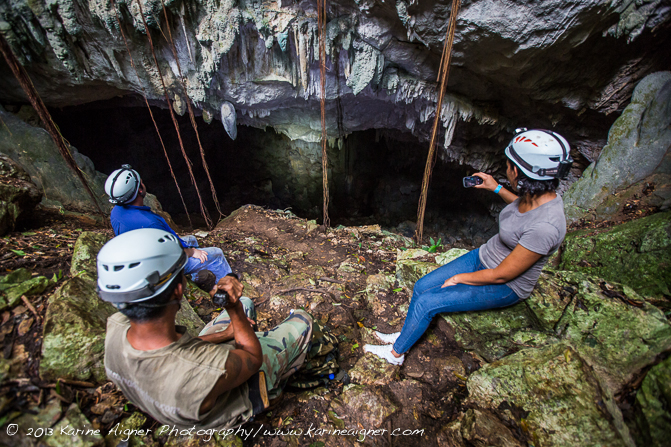 To reach the Blue Hole National Park from San Ignacio, you must first take a bus to Belmopan.

Then take another bus heading south on the Hummingbird Highway, such as to Dangriga or Punta Gorda.

Buses are sometimes only once an hour & fill-up fast – make sure you line-up & grab a seat. No standing is allowed on the buses departing the station so if you’re not lucky, you may have to wait another hour for the next bus.

Ask the driver to drop you off at either the cave or pool entrance to St Herman’s Blue Hole National Park. It’s about 20-35 minutes by bus from Belmopan.

To get out of the park, wait on the Hummingbird Highway for any passing bus. 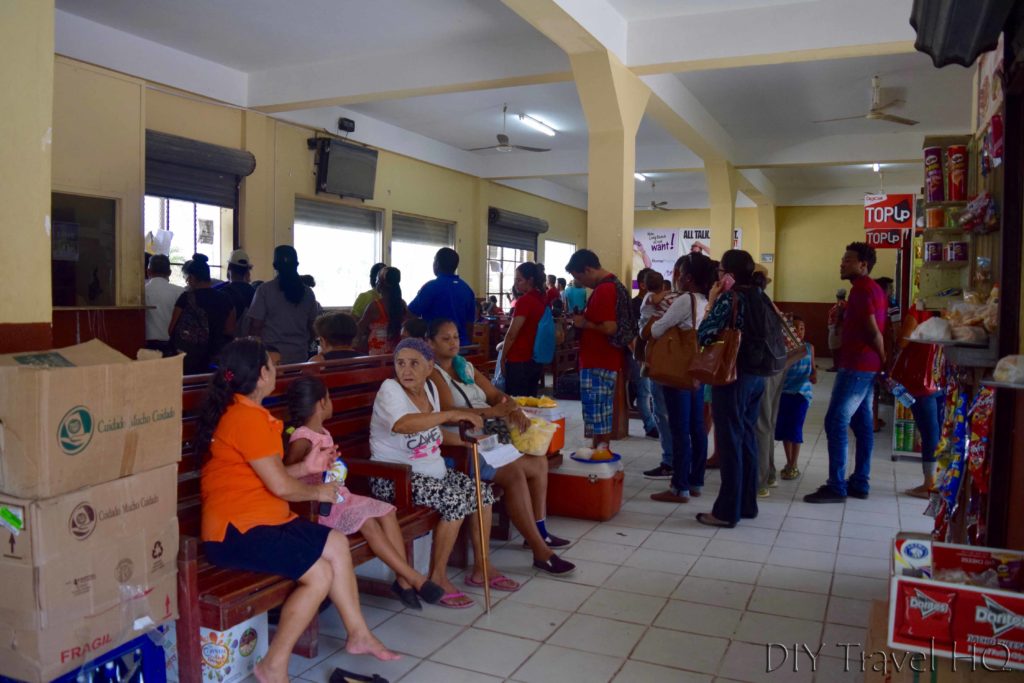 The bus station at Belmopan

Where to Stay in Dangriga

We don’t recommend visiting or spending the night in Dangriga. There’s nothing to see or do & no budget accommodation.

The room was acceptable but shabby for the price.

What did you think of St Herman’s Blue Hole National Park?