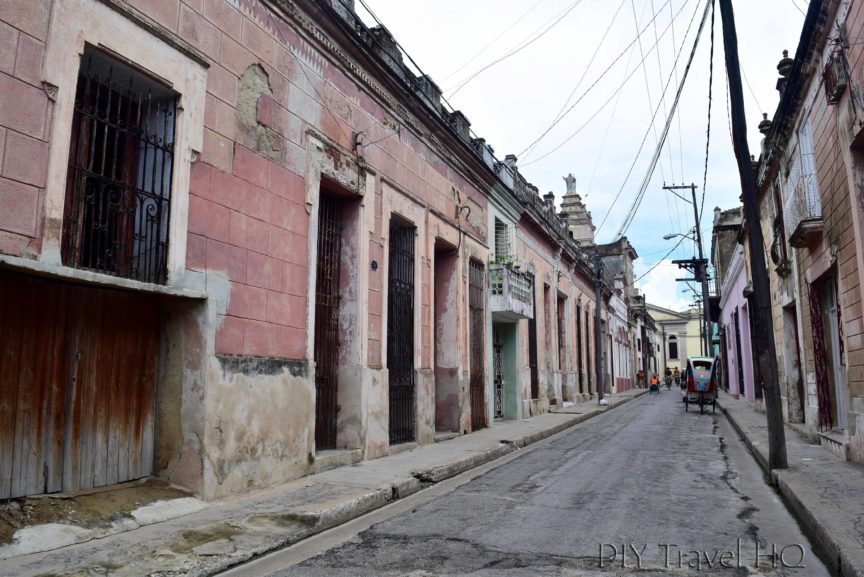 If you love Havana, you’ll adore the equally dilapidated streets of Camaguey and its many plazas, churches, sculptures & tombs – check out our Camaguey Travel Guide for a tour of Cuba’s 3rd largest city!

Legend has it that the winding alleys & labyrinth layout of Camaguey was developed to thwart off pirates & invaders.

These days, it’s mainly tourists like us here at DIY Travel HQ that lose themselves in the narrow streets & hidden plazas, & quite happily so. 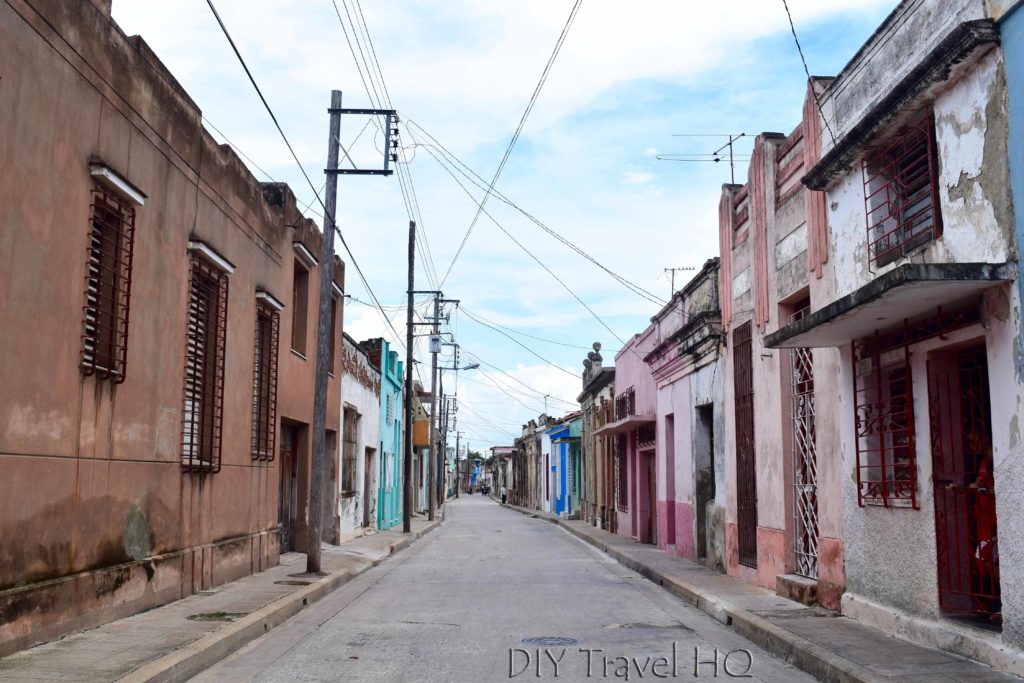 These kinds of dilapidated streets are right up my alley!

The decaying, pastel washed streets recall not only those of Havana but also Trinidad.

It’s a faded gem of a city – undoubtedly once majestic, as still evident in much of the city’s glorious architecture, but perhaps also unloved for decades or centuries too long. 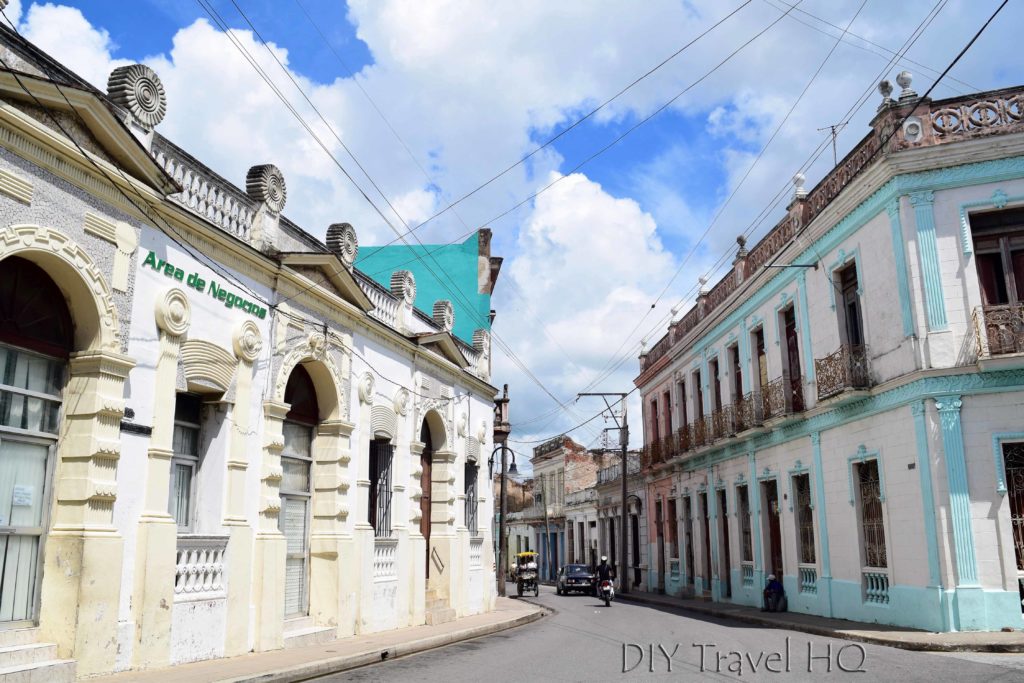 Some beautiful colonial architecture remains alongside the rundown street

However, as a Unesco World Heritage City & having celebrated it’s 500 year anniversary in 2014, parts of Camaguey have been restored.

But the new paint job is rather garish – hopefully funds dry up & the trend doesn’t continue. 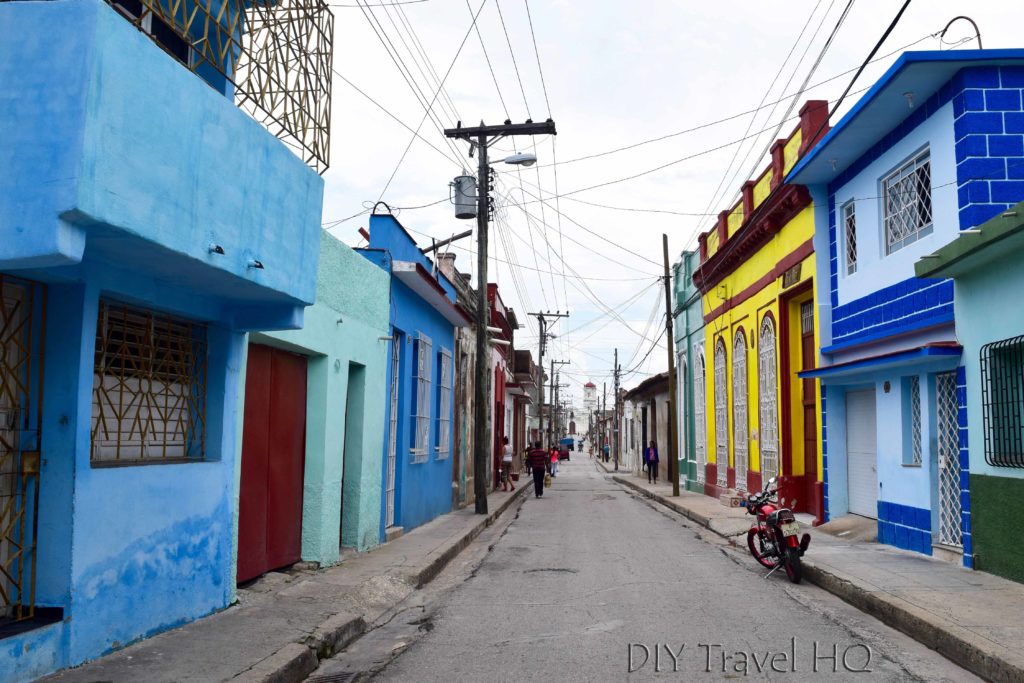 The restored parts of Camaguey are colourful bur too garish!

Besides the traditional attractions of elegant squares & baroque churches, we were surprised to stumble across Camaguey’s Hollywood!

We discovered that it’s a passion of the city, with Camaguey hosting an International Festival of Video Art every year. 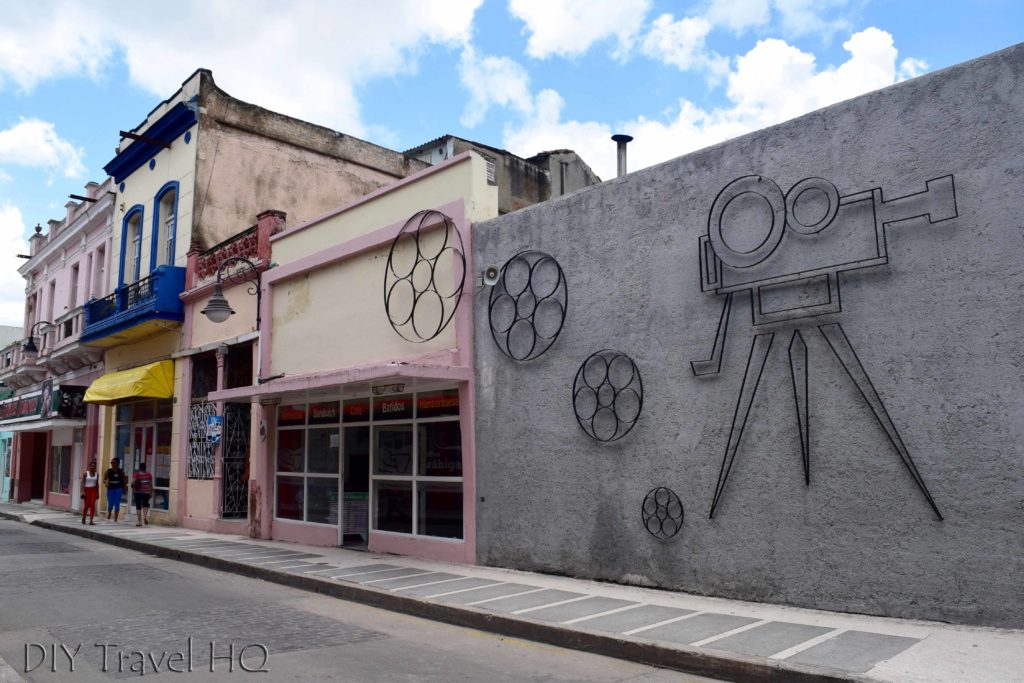 Who knew you could find a bit of Hollywood in Cuba!

Camaguey’s Hollywood is located on one of the streets opposite the yellow church, Nuestra Senora de la Soledad.

The church is located near the corner of the main shopping street in the city, Calle Maceo.

Continue reading our Camaguey Travel Guide for more about some of the other sights in this enchanting city! 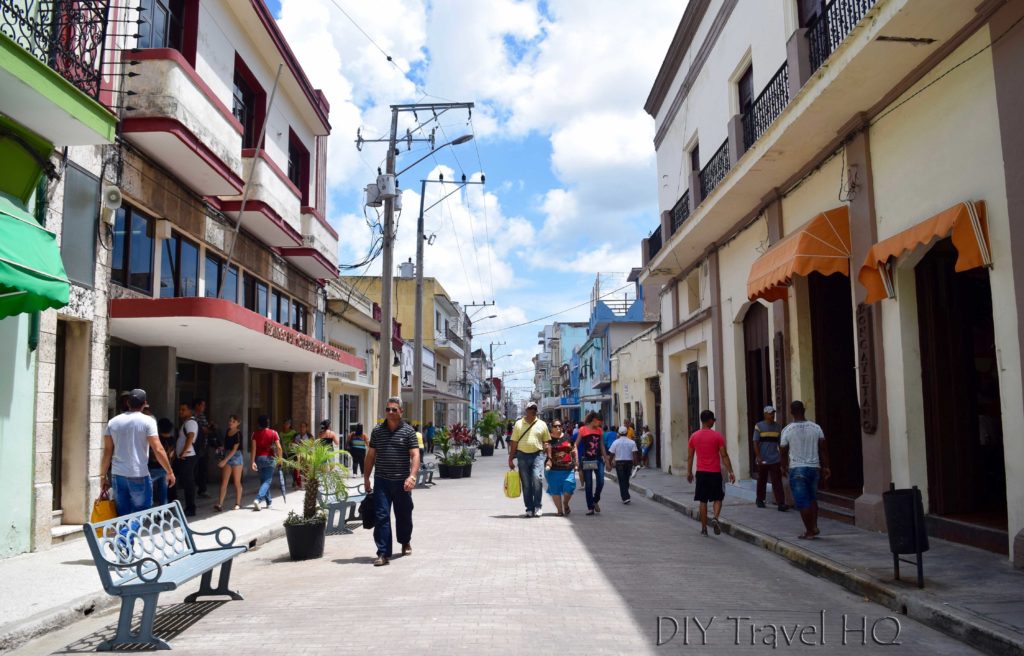 The Workers Plaza is a lovely corner of the city, featuring colonial buildings, trees & a commanding church, Inglesia de Merced.

A large mural of Che Guevera can’t be missed, on one of the corner buildings. 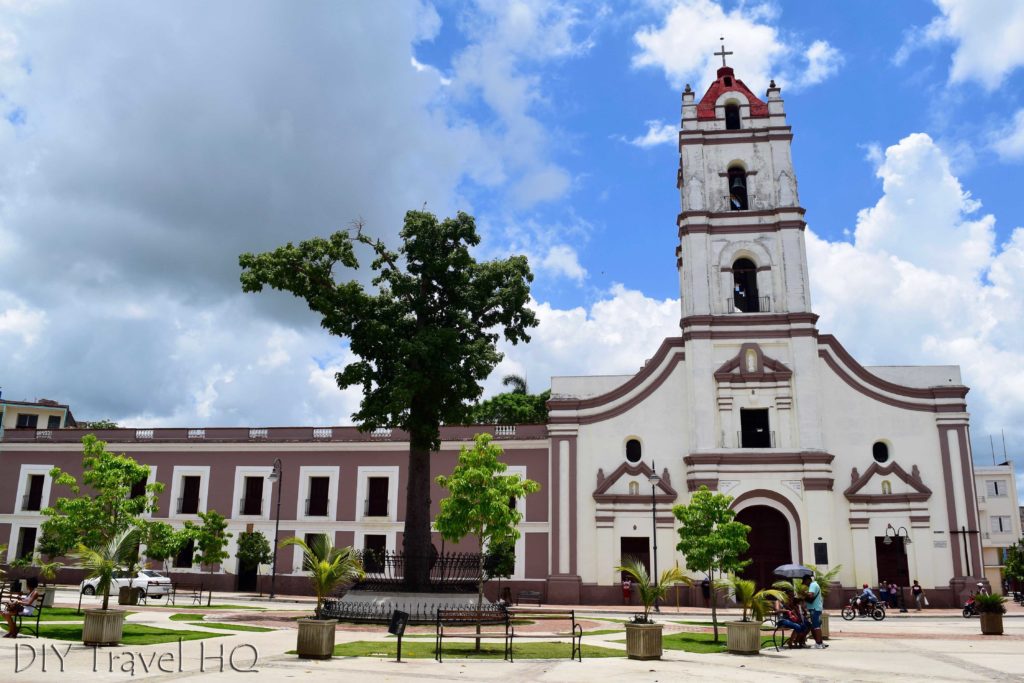 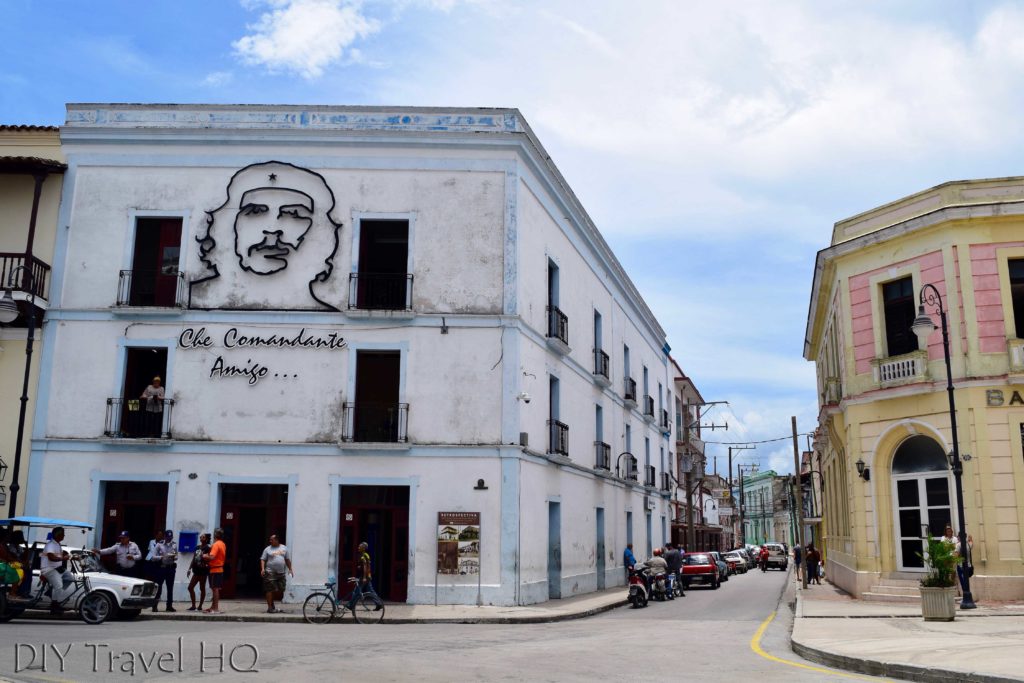 Che mural to the left of Inglesia de Merced 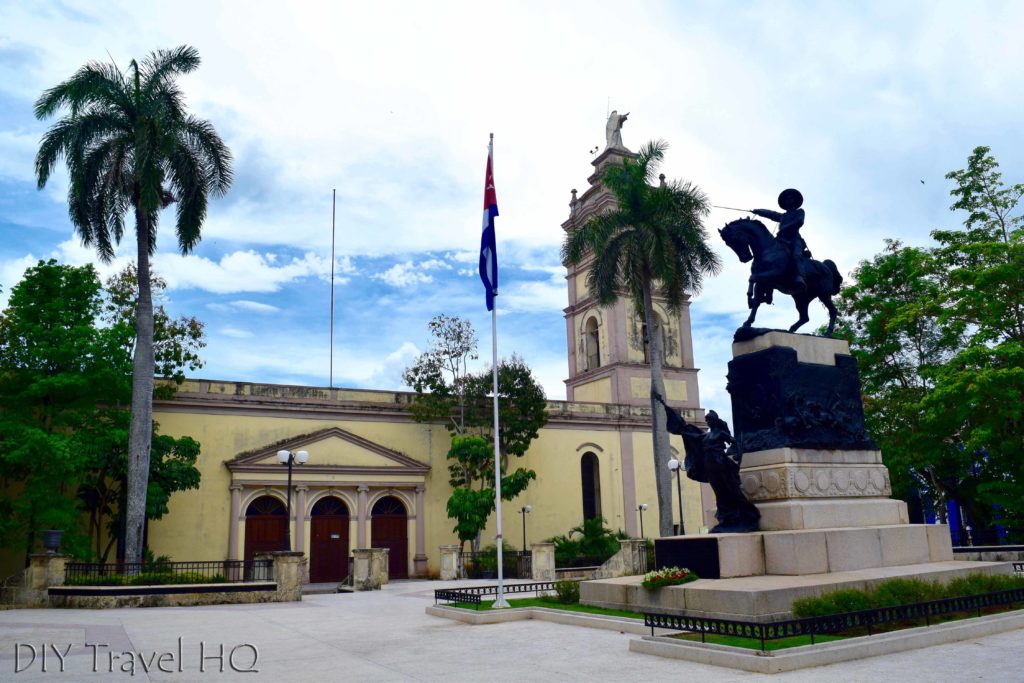 This striking building is also set on Parque Ignacio Agramonte – it’s a new museum but you don’t need to enter to admire its stunning blue & white façade: 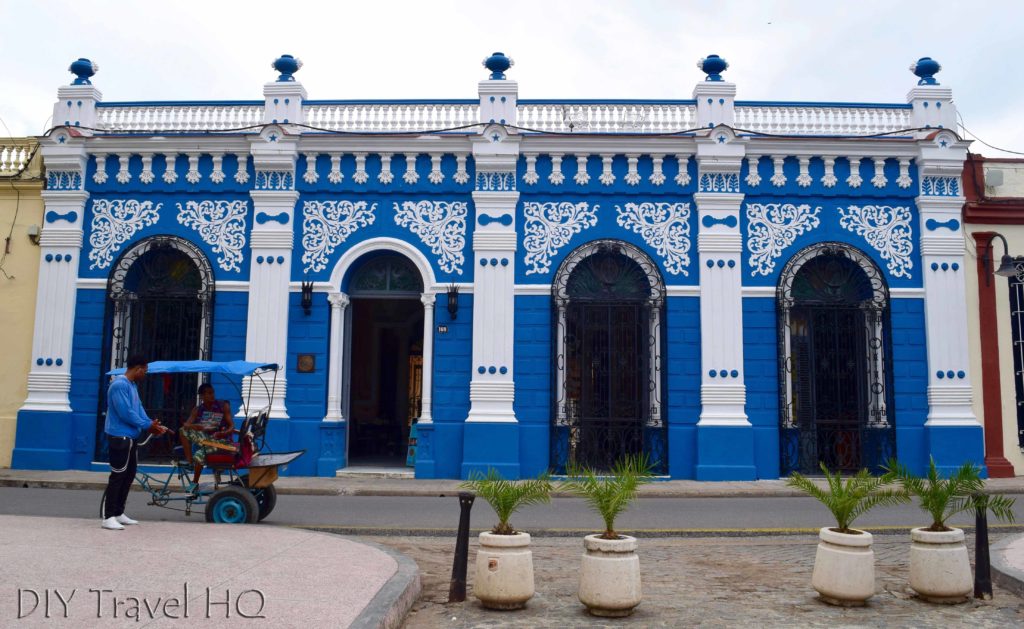 An architectural mix of the neoclassical & Moorish

This is the birth house/museum of Dr Carlos J Finlay (1833-1915), the medical pioneer who discovered how mosquitos spread yellow fever. 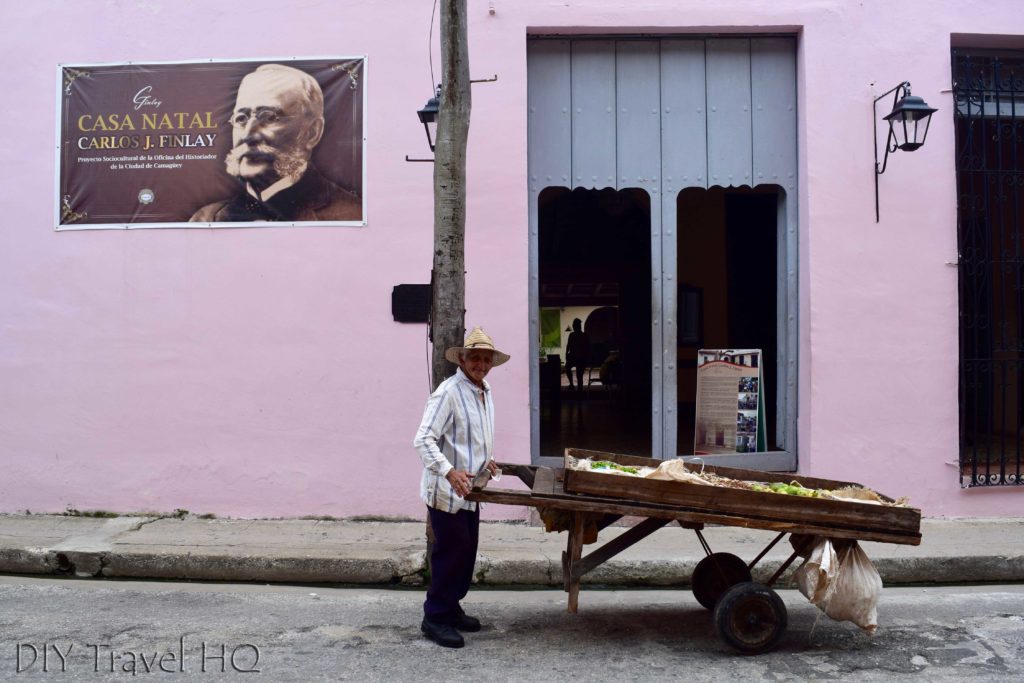 Visit the home of the man that discovered yellow fever

There are many interesting Gothic tombs & headstones, Ignacio Agramonte (the local Independence hero) & other famous Cubans among them. 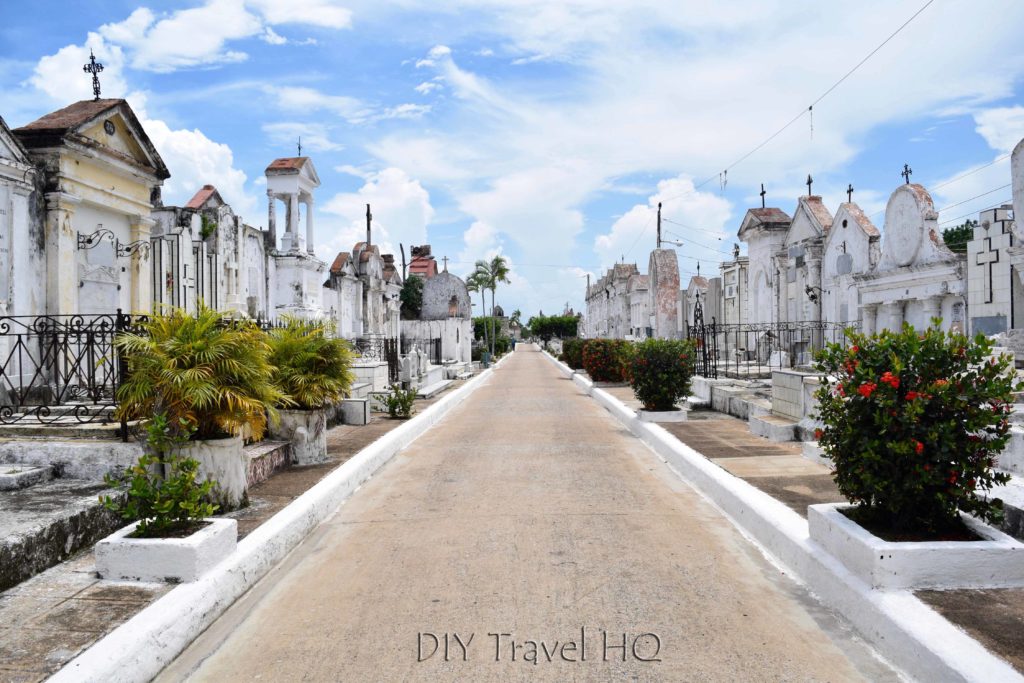 Many local & Cuban heroes lie amongst the bleached-white tombs

It was restored in the last decade, with the addition of life-size sculptures of Camagueyanos (local people) going about their day: reading the newspaper, sharing an embrace, gossiping & wheeling a wagon of pots.

* Camaguey Travel Guide Top Tip: These sculptures are delightful – make sure to take some selfies! 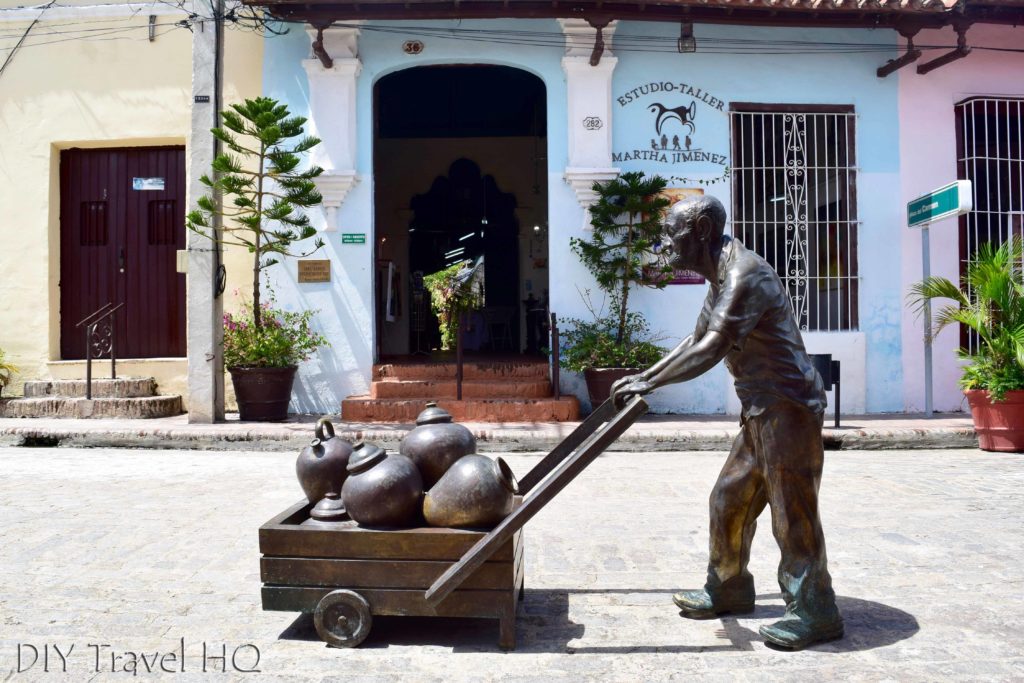 One of several life-size sculptures of locals in their daily routines!

This is the studio-gallery of one of Cuba’s finest living artists, also located on Plaza del Carmen.

There are paintings, ceramics, figurines & pots, all for sale. 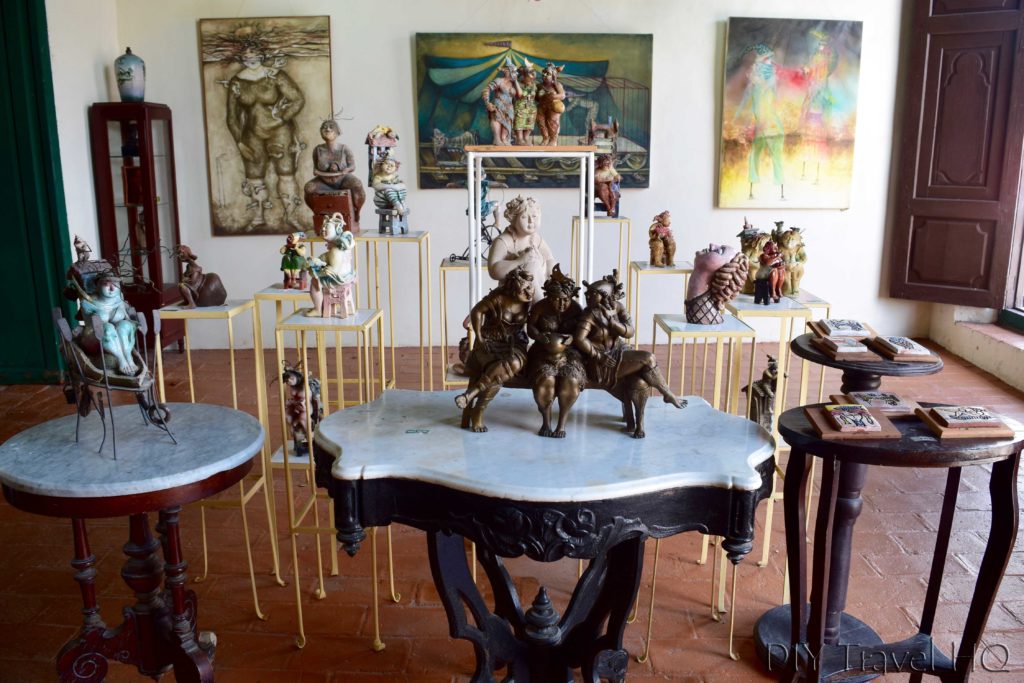 Some lovely & affordable pieces in the gallery, that mimic the sculptures outside

Plaza San Juan de Dios is regarded as Camaguey’s most beautiful square. There are some market stalls, cafes & shops but there’s not much to look at. Like most of the city plazas, there’s little atmosphere, or perhaps we visited on a quiet day.

The showpiece is the 18th century Museo de San Juan de Dios. It has a long history, functioning in the past as a hospital, teachers college & cyclone refuge centre. These days, the building is Camaguey’s provincial museum.

This was listed in “Lonely Planet” as the best market in Cuba – take a look at the photo & judge for yourself! Seeing is believing, or not believing!

We hope that there was more action before we visited in the afternoon. 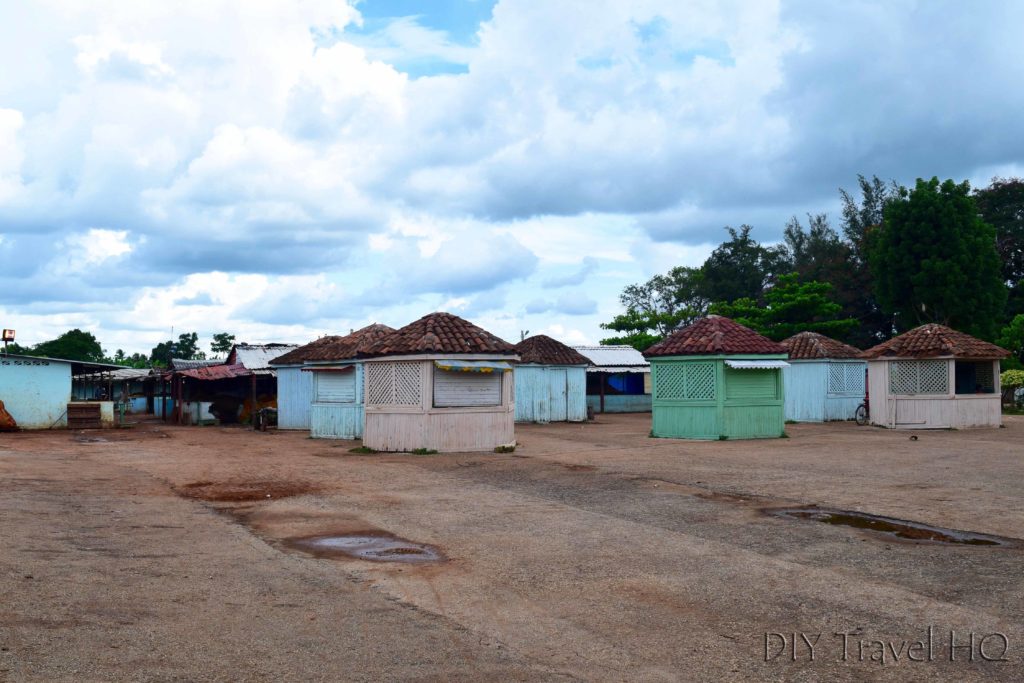 The so-called best market in Cuba was deserted!

Established in 1890, over the Rio Hatibonico, this is Cuba’s largest urban park.

We didn’t explore it much but it features plenty of shade & a baseball stadium. 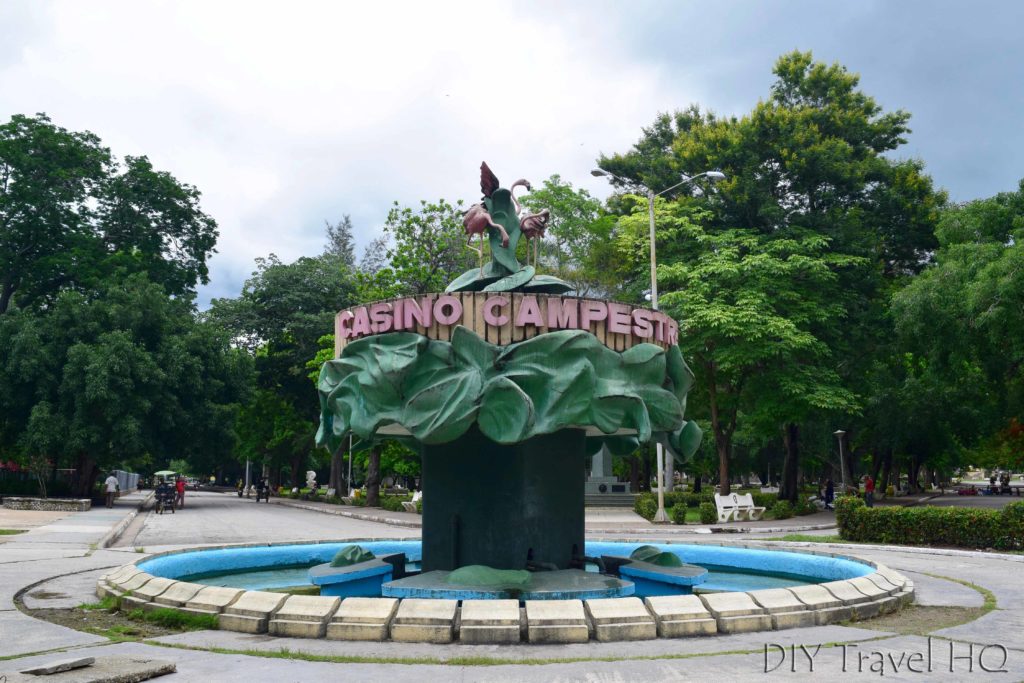 We stayed at Casa Sara – for CUC$15 we got a room with ensuite, air-conditiong & cable tv.

It was of a very good standard for the price & one of our best-value budget casa particulates in Cuba. 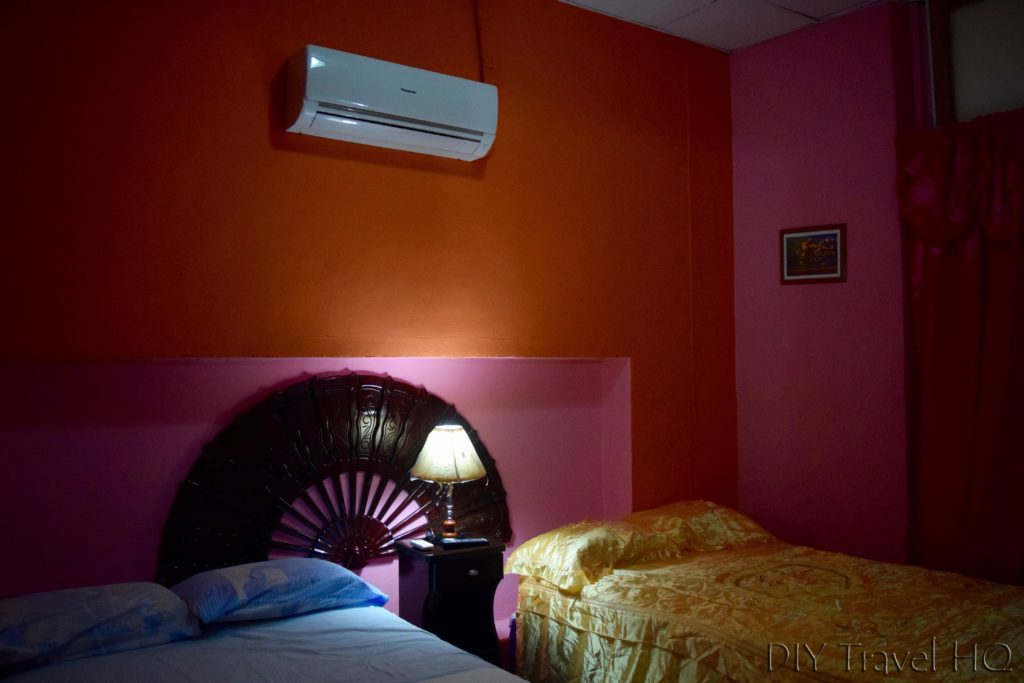 Casa Sara was a great deal for CUC$15 with air-con, ensuite & cable tv

How to Get to Camaguey

From Playa Santa Lucia, we took a local bus from the main road at around 8am.

How to Get Out of Camaguey

Camiones trucks leave from the train station – check departure times the day before as many only leave once or twice a day. The 290km journey from Camaguey to Santa Clara took 5 connections & 12 hours:

*** The Final Word – Our Camaguey Travel Guide recommends a visit to Camaguey if you have time. Skip it in favour of Havana & Trinidad if you don’t ***

What other labyrinth maze cities have you been to?