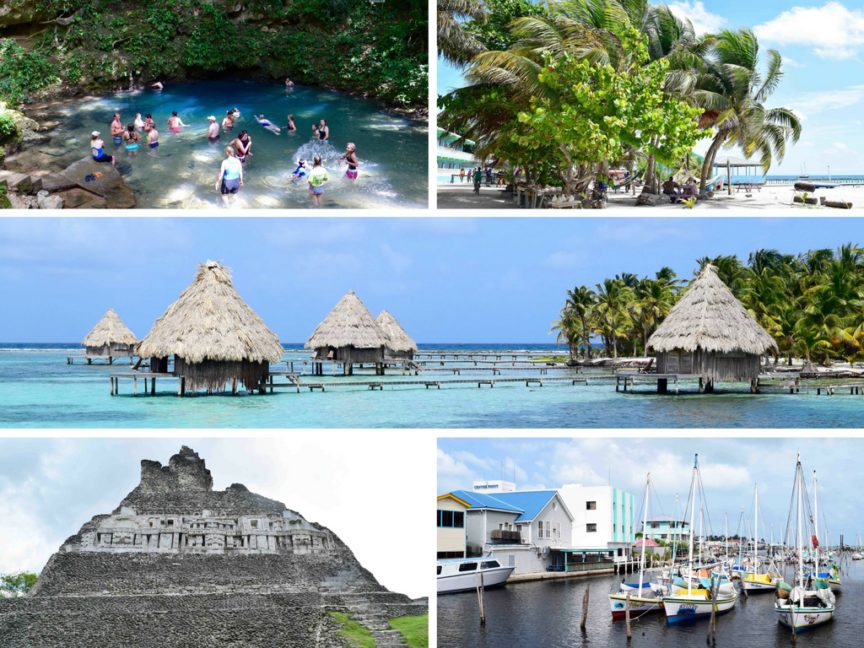 Check out our ultimate Belize itinerary and find out the top things to do in Belize on a budget… including a secret desert island destination that will make you want to stay even longer.

Check out these top 8 Belize destinations:

Find more inspiration in one of the Belize guide books below!

Don’t forget to purchase travel insurance before any trip to Belize. We’ve been using World Nomads for over 10 years – it’s the best-value provider we’ve found but there are important things to consider.

For more details check out our World Nomads review.

If you only visit one place in Belize, make it Caye Caulker!

Caye Caulker is a tiny coral island, an hour away from Belize City by water taxi. The whole island measures 8 km long by 1.6 km wide but the centre of town is even smaller & can be walked in 10 minutes.

With a relaxing environment, Caye Caulker is popular with backpackers traveling through Central America and one the top Belize attractions. There’s not actually much to see & do but be sure to take a Belize snorkeling tour out to Hol Chan Marine Reserve.

Swimming with nurse sharks & stingrays is an experience you’ll never forget. You’ll want to capture those underwater moments with a GoPro.

Other marine life you’re likely to see at Hol Chan are manatees (seasonal), turtles and seahorses as well as stunning coral gardens.

We always travel with our own snorkel set as an ill-fitting mask can really ruin a snorkel trip but they are included in the tour price.

Caye Caulker is also a base for dives to Belize’s famous Blue Hole. The dive is not to be underestimated not and restricted to experienced divers only – as well as those that can afford it.

Experience the best of Belize in 1 destination – it’s #1 on our list of the top things to do in Belize!

* We spent 2 nights on Caye Caulker.

Things to do on Caye Caulker

This island paradise caters to all budgets but we’ll show you all the things to do on Caye Caulker on a budget!

Belize City comes with a bad reputation of crime & poverty, which is not entirely unjustified.

It’s regarded as one of the more unsafe destinations in Central America so be aware of your surroundings and keep your valuables secure at all times.

We recommend wearing a secure money belt and carrying an anti-theft daypack.

In Belize City you’ll find people from all walks of life. The streets are rundown, the pavements are uneven and the canals are grimy. Erik felt harassed everywhere he went.

In contrast, I didn’t have any issues in my short time there as a solo female traveler. I enjoyed the grittiness of the city and also discovered nice areas of colonial and seaside charm.

None of these are major points of interest if you only have 2 weeks in Belize. But Belize City is worth a quick stop if you’ve got a few hours to spare as you’re going to/from Caye Caulker or the airport.

* We visited Belize for a couple of hours after returning on the ferry from Caye Caulker.

Take a guided nature walk at the Community Baboon Sanctuary & hear the call of the black howler monkey – or the baboon as locals call them.

Naturally there are no baboons in Belize but howler monkeys are native to the forests of Central & South America. This is getting too confusing… lets move on!

Visitors can tour the museum at the visitor centre and take guided walks through the reserve. There are over 3000 monkeys so seeing them is pretty much guaranteed though they camouflage well high in the trees. What’s for sure is that you’ll definitely hear them!

The howler monkey is the 2nd loudest animal in the world, after the lion – hearing is believing! They sure do have an all-mighty roar, which can be heard from up to 5 km away. This lets other monkeys know to stay away & that they’ve occupied a certain territory.

If you’re traveling throughout Central America you don’t need to make a special trip to the Community Baboon Sanctuary. You should definitely come across howler monkeys elsewhere on your travels, including at the Tikal ruins in Guatemala.

San Ignacio is the easy-going travellers hub of Belize and a great base for day trips around the region if you’re wondering where to go in Belize.

It’s may be a small town but it’s equipped with fantastic tourist infrastructure such as good budget accommodation, a variety of restaurants and decent transport connections to the rest of Belize.

Of course there also the many travel agencies that can help you arrange tours and adventure activities like hiking, kayaking and horseback riding. Unfortunately for budget travelers, it’s hard to get around without your own wheels. And the tours don’t come cheap either.

Despite the high price tag don’t miss the Actun Tunichil Muknal cave tour, voted the best Sacred Cave by National Geographic. You’ll have an awesome time swimming and wading through the Mayan under world, coming across skeletons and ancient artefacts along the way.

Put the ATM caves on your adventure bucket list for sure! It’s was the highlight of our 2 weeks in Belize.

Another highlight of San Ignacio is nearby Xunantunich, arguably the best Belize ruins. It stands on a hilltop and is comprised of 5 plazas and the towering 40 m high El Castillo (The Castle). From the top there are stunning 360 degree views of the Cayo countryside. You can even look into neighbouring Guatamala which is just 1 km away.

Cahal Pech is another Mayan archaeological site in San Ingancio a 20 minute walk from the town centre.

* We spent 3 nights in San Ignacio

San Ignacio is the ultimate day trip mecca – find out what tours are available as well as information on attractions, food, accommodation & transport

Take a day trip to St Herman’s Blue Hole National Park where you can swim in a beautiful cenote, trek through the jungle & explore a nature cave.

From the visitor centre, follow the short trail to St Herman’s Cave. You can explore it DIY style but only for 200 metres. To go further you need to hire a guide to show you the amazing limestone formations and Mayan artefacts inside.

Either way, be sure to bring along a torch light as it’s pitch black as you soon as you enter.

From St Herman’s Cave it’s a 45 minute mosquito-ridden, jungle trek to the Blue Hole. Both sites are connected by an underground stream. Alternatively you can try hitchhiking on the Hummingbird Highway for the 1 minute drive between the 2 sites.

The Blue Hole was formed by the collapse of an underground limestone cave. It measures 100m in diameter & 33m deep. It’s a lovely place for a refreshing swim but it can get busy with other visitors.

Visit Belize and enjoy the good life in stylish Placencia.

These places are mostly outside of Placencia. In the small town itself, there’s not much to see or do except relax and soak in the laidback atmosphere.

The Southern beaches aren’t great for swimming so consider spoiling yourself by checking-in to one of the many  luxury resorts up north .

* We spent 1 night in Placencia

However if you do find yourself here it’s a laid back town with friendly people of Garifuna ethnicity. The Garifuna are mixed-race descendants of African, Caribbean & Indigenous South American people, originating from the African slave trade in the 17th century.

Today, they mainly live along the Carribean Coast in Honduras but there are smaller populations in Belize, Guatemala & Nicaragua along with a large diaspora in the US.

There aren’t many things to do in Hopkins but you can while the days away on the beach, if the weather is agreeable.

The Cockscomb Basin Wildlife Sanctuary is nearby where you can go hiking, camping, wildlife spotting and birdwatching.

So chill-out in Hopkins, meet the local Garifuna people & stock up on your desert island supplies for Glovers Resort.

* We spent 3 nights in Hopkins

Glovers Atoll Resort offers a rustic desert island experience, where you can camp or stay in cabins or bungalows on your own private island, 3 hours from the mainland.

Go snorkeling or diving, laze in hammocks & drink all the coconuts you want! This is what your Belize escape should be all about!

But Glovers isn’t for everyone – there’s no electricity or running water & that’s only the beginning. Waking up to 360-degree Caribbean sea views every morning though is pretty amazing.

A one week package including transport ranges from US$109 for camping to $328 for accommodation in an over-water bungalow.

We camped with a tent similar to this 2-Person tent and had a fantastic experience though it wasn’t without some hiccups.  Be prepared with your food, water, gear & expectations & you’ll have no worries.

Check out our post below for more details on what to expect:

* We spent 6 nights on Glovers Island, then 1 night back in San Ignacio before crossing into Guatemala

From accommodation & food to facilities & activities, find out everything you need to know about staying at the rustic Glovers Atoll Resort

Other destinations in Belize include:

Disclaimer: This post contains affiliate links, which means that we receive a small commission if you click on a link & purchase something that we have recommended, at no extra cost to you.