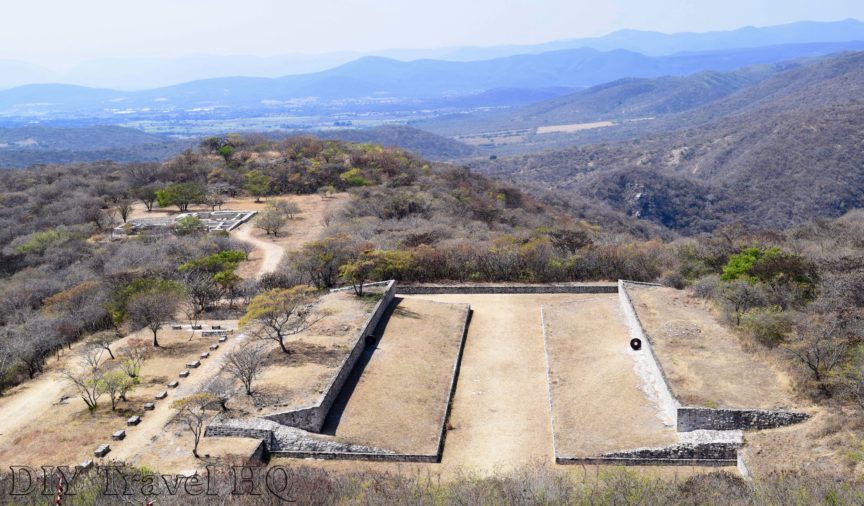 Xochicalco is a UNESCO World Heritage Site for good reason – learn about the history of the site & find out how to get there by bus from Cuernavaca.


UNESCO listed Xochicalco is not your run of the mill Mexican ruins. From a distance it looks like a pile of rocks, but surprises lurk around every boulder.

We here at DIY Travel HQ visited the site as an easy day trip from Cuernavaca. We found it to be one the best ruins in Mexico so it’s not to be missed if you’re in the vicinity.

Expect to spend 3 hours exploring the ruins, and 2-4 hours in round-trip transportation.

The first glimpse of Xochicalco from the entrance

The territory of Xochicalco was first inhabited roughly 2200 years ago, but did not become an urban center until 650 A.D. Built to defend the Mesoamerican trade routes and facilitate trade, Xochicalco grew to house up to 20,000 people.

Despite a rapid creation, destruction struck even faster. Around 900 A.D. Xochicalco was burned and abandoned, leaving personal households in tact beneath piles of ash. Today, artifacts may be found at the local museum and also in Mexico City.

One of the main pyramids

If you are taking public transportation, the bus will drop you off at the entrance to Xochicalco.

Despite the ruins being located to your left, you MUST go right and visit the museum to purchase your ticket (65 pesos). This also gives you a chance to see some of the artifacts, and learn about the site if you are able to read Spanish. 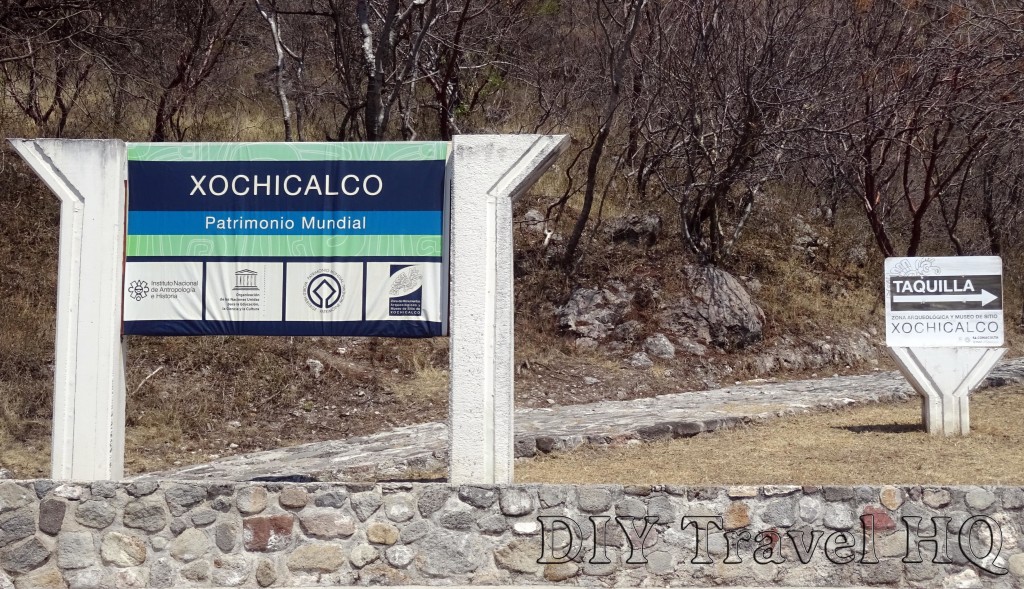 From the museum, walk down the path to the official entrance of Xochicalco. After a couple more minutes of walking inside the ruins, you will find yourself in the Plaza of the Stele of the Two Glyphs.

Looming over the plaza is the Grand Pyramid, with two supporting pyramids, and a stone glyph tablet in the center.

Plaza of the Stele of the Two Glyphs with Grand Pyramid

From the far pyramid it is possible to enjoy an outstanding view over the surrounding countryside that includes a lake.

The lakeside setting of Xochicalco

The real surprise, though, is the excellent example of a Mesoamerican ball court located just underneath.

The Southern Ball Court itself is composed of a flat grassy section in the middle, sloped grassy sides, and vertical stone walls with a stone ring on each side.

A different view of the same ball court

Challenging teams would literally be playing for their lives as the winners were sacrificed to the gods.

In order to win, a team must get a rubber ball weighing up to 8 pounds through the elevated ring without using their hands. The most common approach involved using their hips to deflect the ball.

Located behind the ball court is the Palace, which was utilized as bedrooms, kitchens, workshops, and storerooms.

To get here and to the ball court, walk down the stairs located on the left side of the Plaza of the Stele of the Two Glyphs. You also have to return this same way to move onto the next section of Xochicalco. 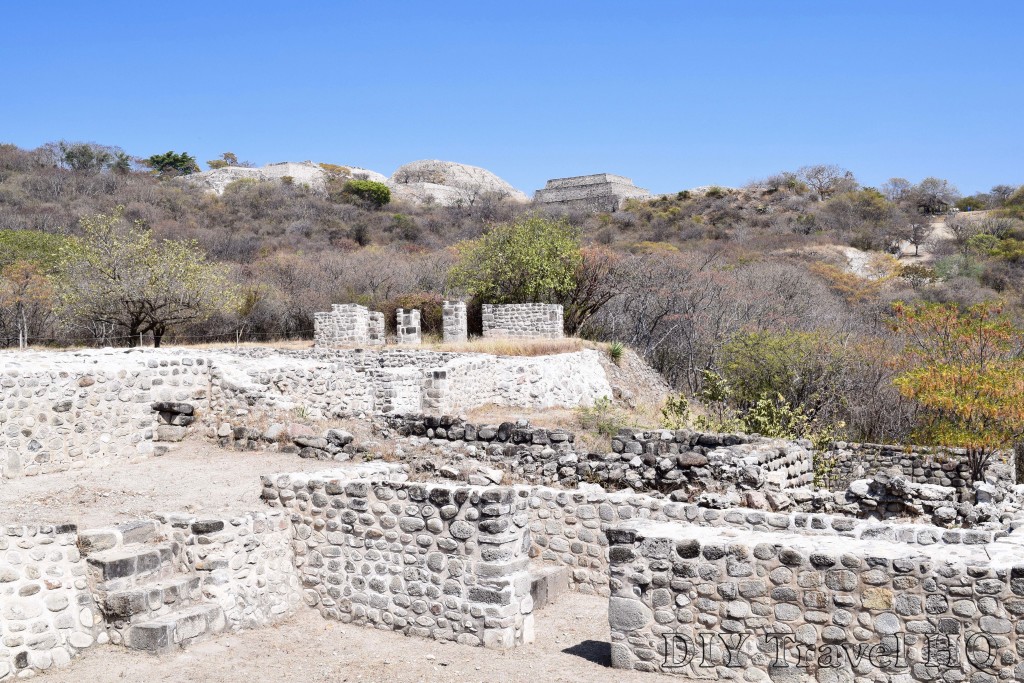 Climbing the Grand Pyramid takes you to the start of the highest level at Xochicalco. You will find several small pyramids and the Eastern Ball Court with a sloping access path engraved with glyphs. Turning left at the end of the alley introduces you to a partial recreation of what an actual roofed building would look like.

Although all you see today are stones, roofs were wood thatched and layered with stones on top. When cities were raided, household items would burn and allow the ceiling to catch on fire before ultimately collapsing under the weight of the stone roof. 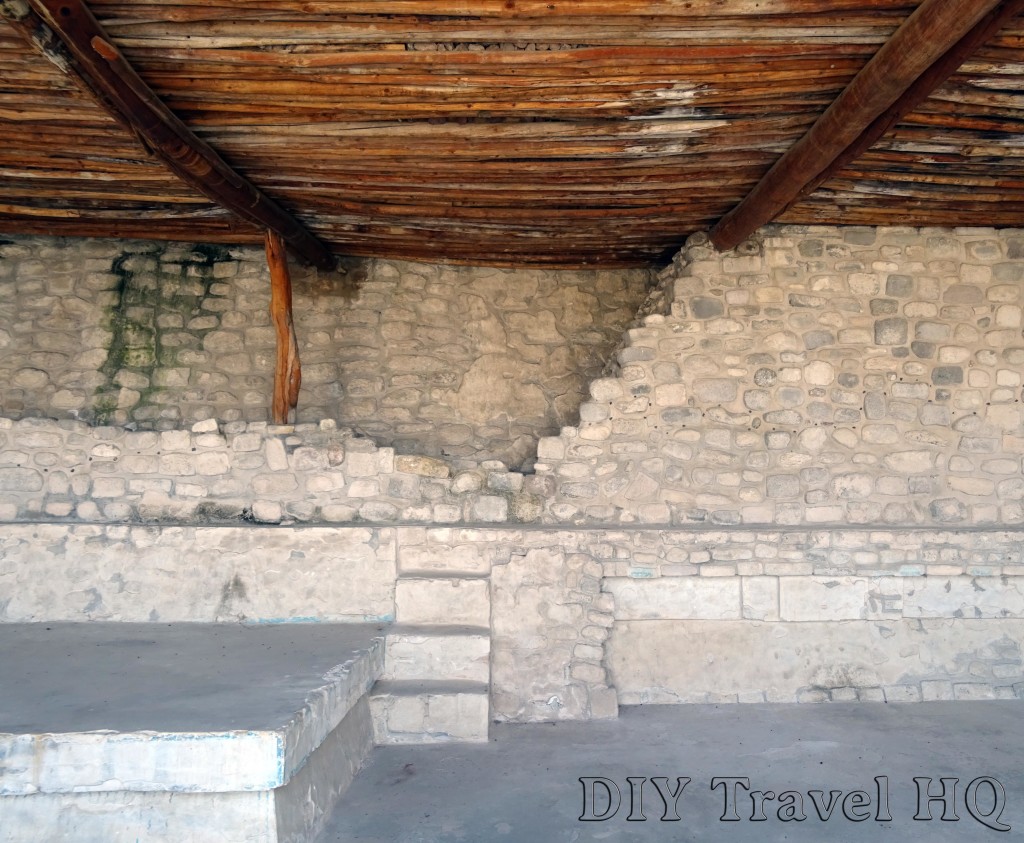 Following the path up and to the right leads you through a maze of residential rooms left in shambles.

You can only imagine how little privacy everyone had with room adjoining room, though at least the surroundings were breathtaking: 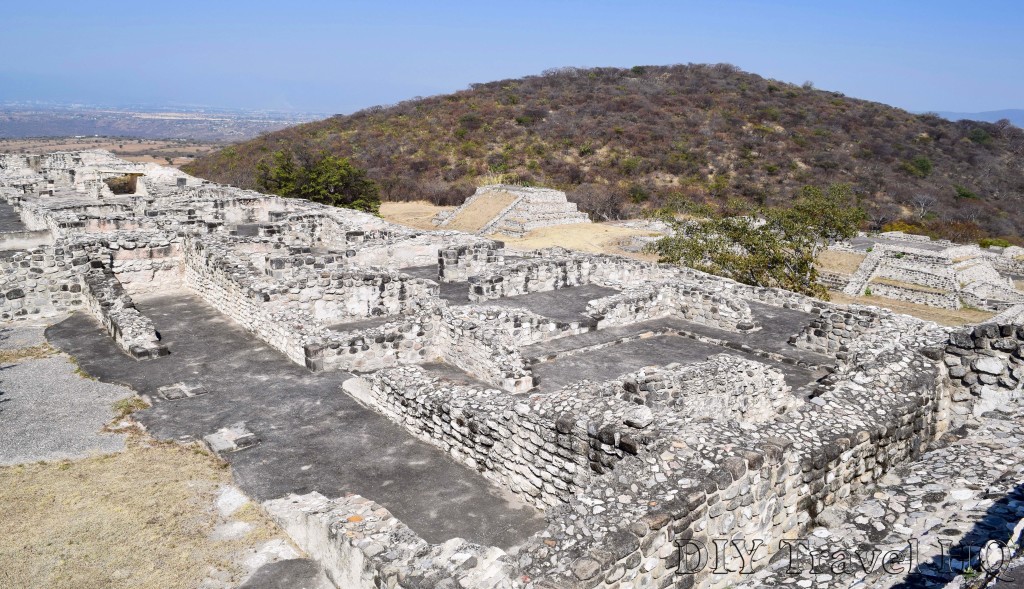 At the end of this section is the Main Plaza.

You get excellent views overlooking the middle tier and surrounding countryside, but the highlight is the Pyramid of the Feathered Serpent covered in bas-reliefs that were restored in 1910.

Pyramid of the Feathered Serpent

Take your time viewing these reliefs of feathered serpents as many Mexican ruins are stripped of murals and carvings.

Pyramid of the Feathered Serpent Bas-Relief

As you make your way to the exit there is one more important detour to make for another star attraction.

It is possible to visit the Xochicalco observatory in the afternoon to see a beam of sunlight encircle the floor. 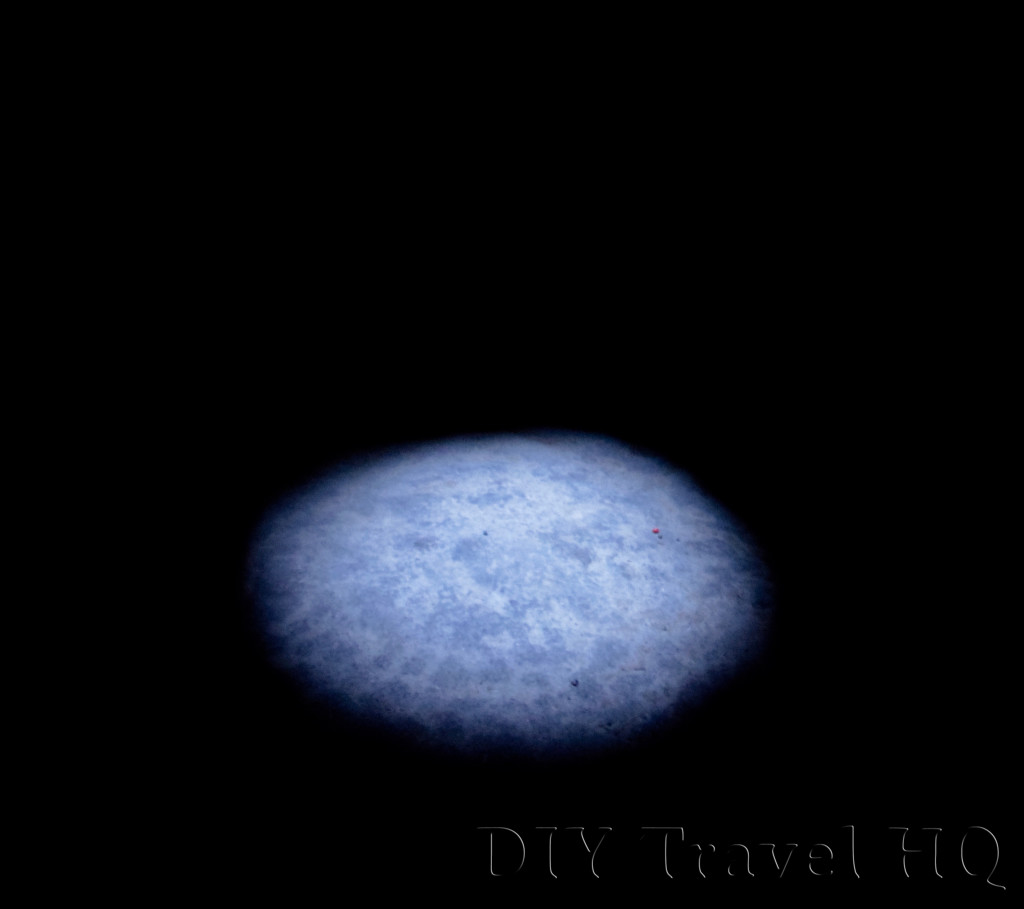 Beam of sunlight in the observatory

Xochicalco is thought to have been a meeting place for regional astronomers to discuss and confirm the calendar used for agricultural and religious purposes.

Groups entering the observatory are limited to 20 people, and depart with a guide every 15 minutes. Watch your footing as chambers along the way may be dark and the floor is uneven.

The darkness inside the Observatory

Although everyone will originally be jockeying for viewing position in the beginning, the guide doesn’t rush you to leave. It just means you have less light guiding you back!

This concludes your tour of the Xochicalco ruins! 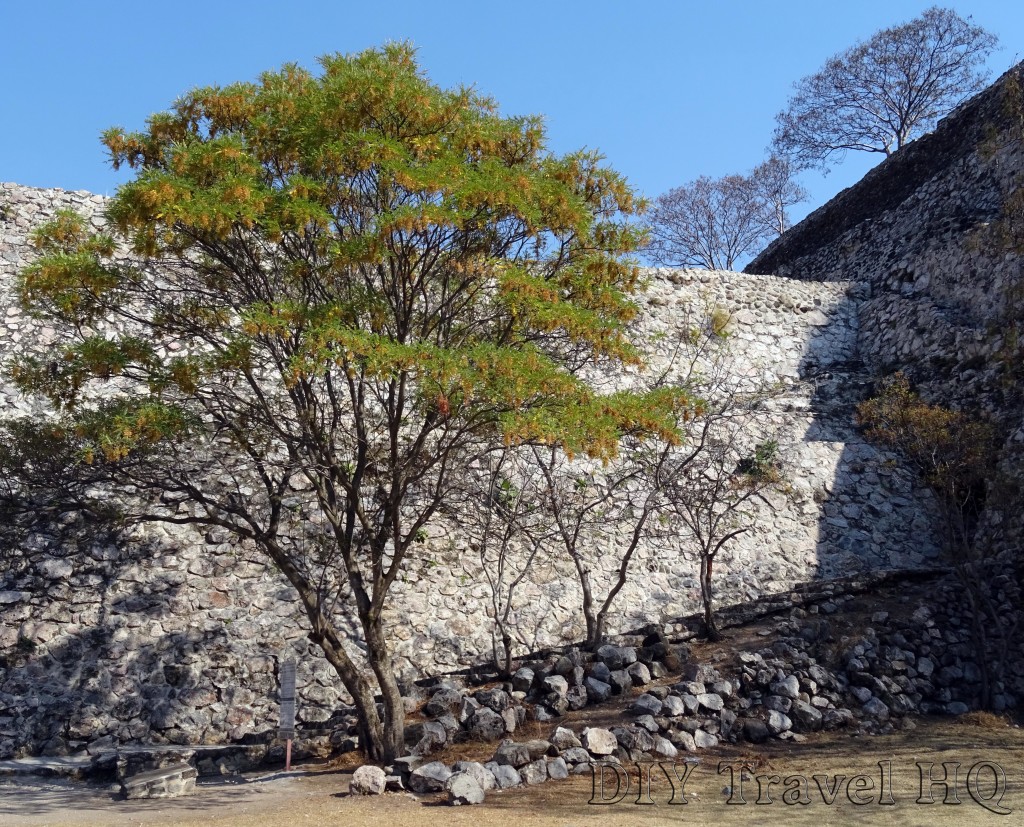 How to Get to & from Xochicalco

There are two bus companies that depart from Cuernavaca to Xochicalco. Let’s compare the pros and cons of each:

Lasser – 15 pesos, 2 hours, runs every 30 minutes, located on the far side of the market

Most visitors to Cuernavaca choose to visit Xochicalco via Pullman de Morelos, but the budget traveler with more time than money can choose Lasser like we did. 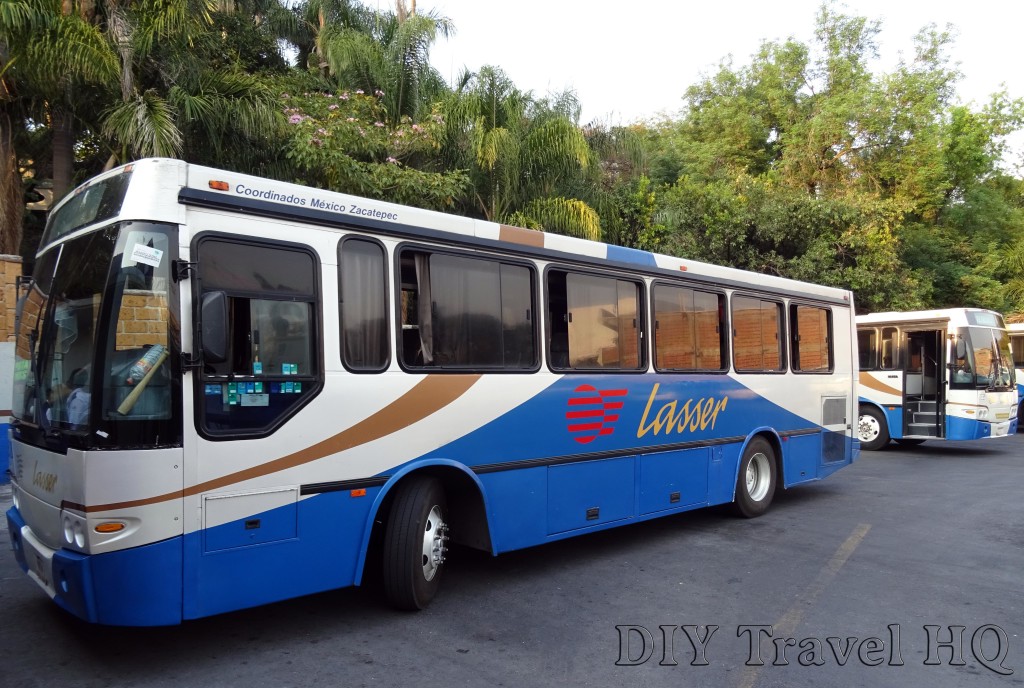 Lasser Bus From Cuernavaca to Xochicalco

*** The Final Word: Xochicalco is one of our favourite ruins in Mexico ***