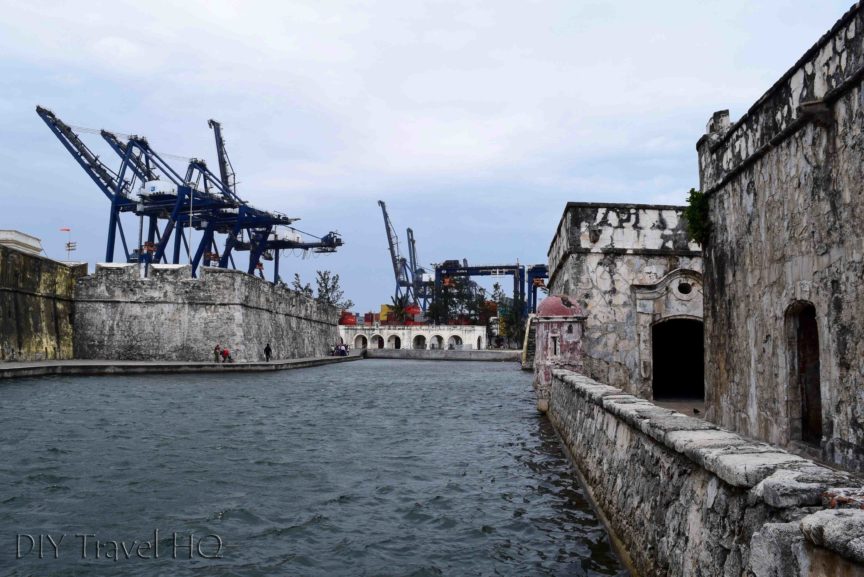 Veracruz may be a gritty port city but it does offer insight into a turbulent maritime past – find out the top 5 Veracruz attractions in Mexico’s oldest European-founded settlement.

Before we here at DIY Travel HQ get into the Top 5 Veracruz Attractions, let’s take a brief look at its history.

As far as the Western world is concerned, Veracruz started to matter in 1519 when Hernan Cortez first landed in current day Mexico. Roughly two years later and with the help of Cempoala, he was able to conquer the Aztecs.

The next 400 years saw squirmishes between the Spanish, English, French, and Americans.

The biggest losers were the locals as their daily life was infringed upon, as well as sometimes being pillaged and raped. 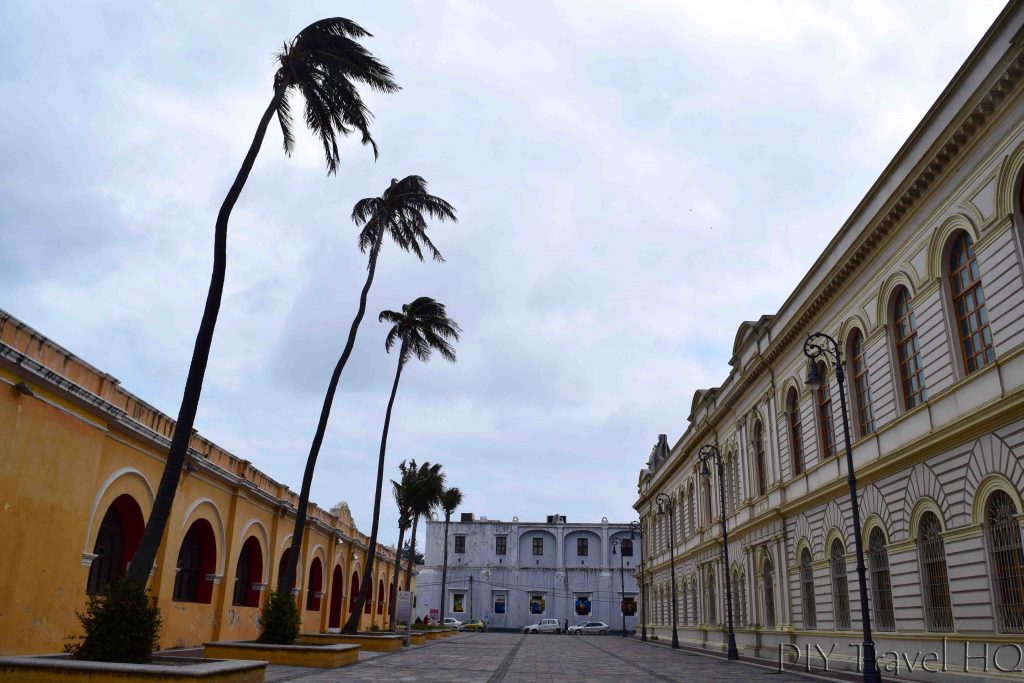 Veracruz has a very tumultuous past, and has been the site of many invasions.

However, the city has always rebounded with enthusiasm.

Today, you are more likely to see cargo ships entering the busy port compared to invading countries or pirates.

The bandits have resorted to hijacking the long distance overnight buses instead.

We thought the best Veracruz attractions were definitely defensive installations, and the navy museum.

Veracruz can be explored in a day, but possible day trips can extend your visit. Notable excursions are Cempoala combined with La Antigua, and Tlacotalpan.

The most appealing Veracruz attraction is San Juan de Ulua.

Previously located on an island, it is now linked by a long road that also services the port.

Watch out for Veracruz’s windy days as this is not someplace you want to walk when the sand is whipping into your eyes.

Instead, either take a taxi or hitchhike from the entrance to the peninsula.

The fort comprised of stone and coral is breathtaking in its dilapidated state.

There are three embattlements located to the left of the main fort.

The first one is free to enter, while the middle is covered under admission to the park, and the last is closed to the public.

It is best to view these first as they will become less impressive after viewing the fort itself. 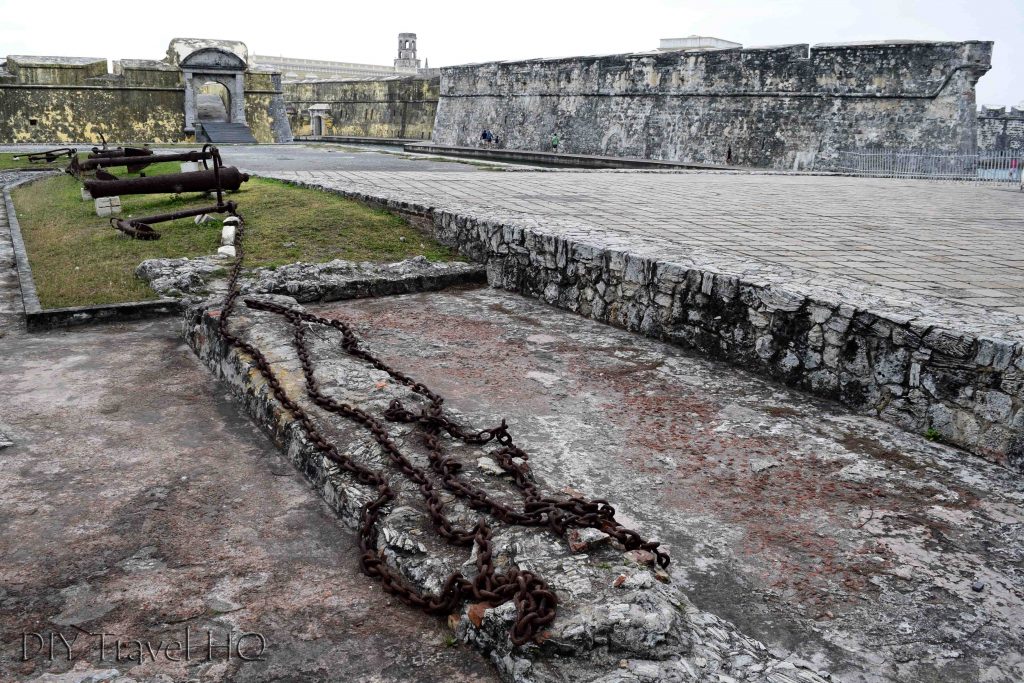 After obtaining your entrance ticket, you walk along the water-lined pathway to the entrance.

Turning left leads you over a bridge to the central embattlement, and heading right you enter the main fort.

The center of the fortress is lined with arched tunnels.

These were originally used as defensive positions with gun slits, but were also converted into prison cells over the years.

The far right corner of the fort is a small maze you can wander around, with gated skylights filtering the sun. 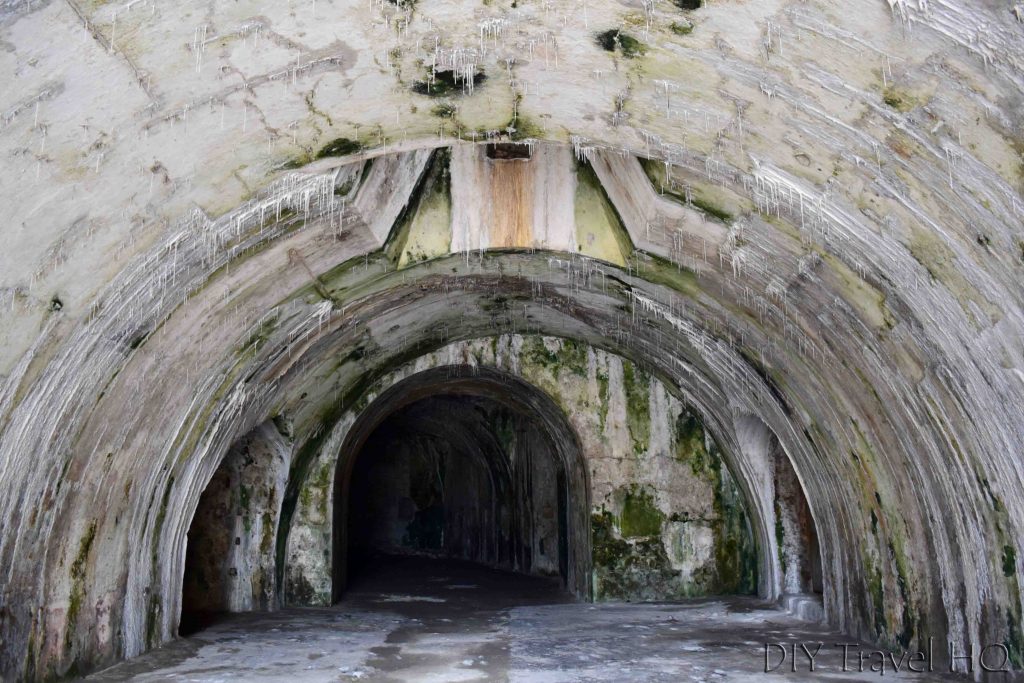 One of the many tunnels in San Juan de Ulua fort

If you continue through the tunnels opposite the entrance, you will come across the sea entrance.

There are nice views of Veracruz proper from here. Upon heading back in, climb the stairs to the right and do a lap of the perimeter.

The most interesting view is from the turret in the far right of San Juan de Ulua.

It not only provides a nice view of Veracruz, but an unobstructed observation of cargo ships being loaded.

There is also a small museum on-site featuring artifacts from Mesoamerican civilizations. 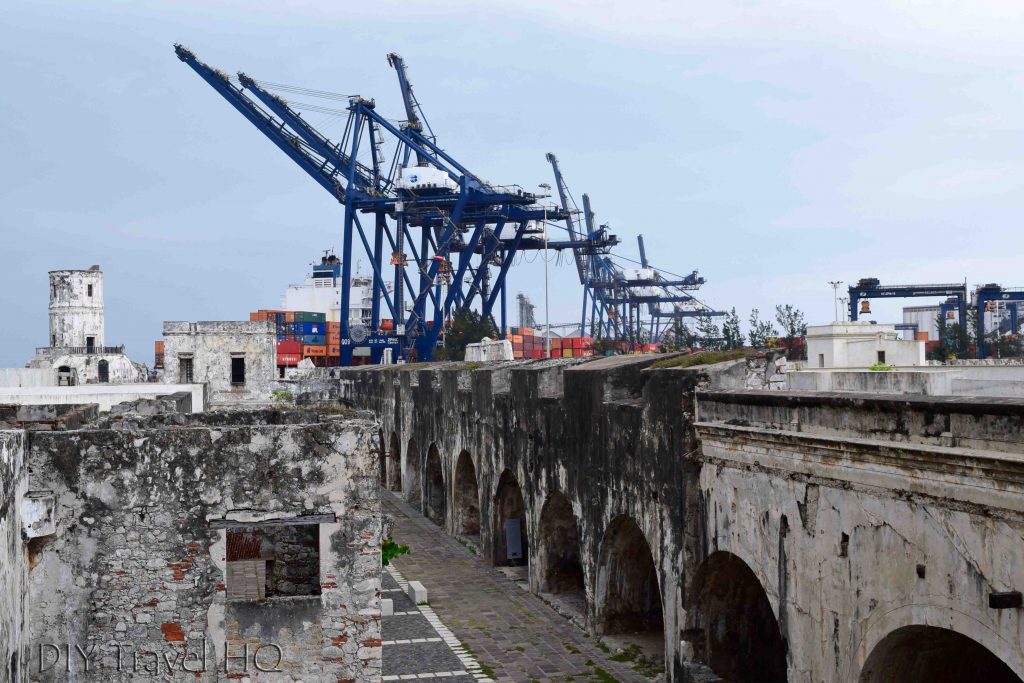 San Juan de Ulua is located by the Veracruz port

In order to protect Veracruz in the 16th century, the city was guarded by 9 forts linked by walls.

The last remaining fort is Baluarte de Santiago which is today one of the top Veracruz attractions.

Despite being several blocks from the water, it was constructed along the ocean’s edge.

The most impressive aspect of the fort is from the exterior.

It is also free to cruise around the exterior embattlements, but admission to the interior museum costs 55 pesos.

This part of the fort can be skipped. 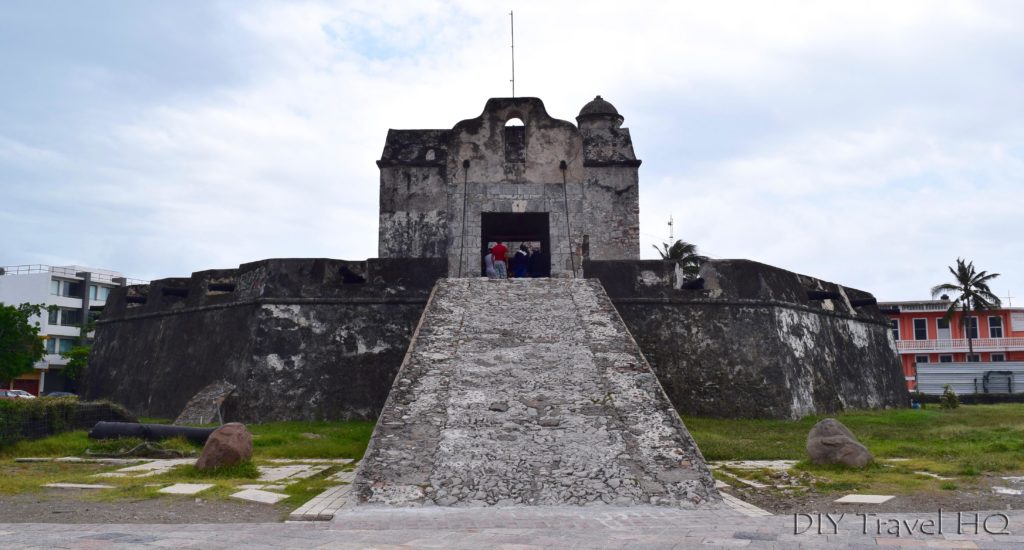 Take a lap around the interior, but don’t pay to visit the small museum.

Newly renovated, and interactive Museo Naval Mexico (45 pesos / $2.40) is a surprisingly good museum & one of the best Veracruz attractions.

Explanations are only in Spanish, but cover the numerous confrontations that have occurred in Veracruz.

You can also enjoy a simulator or climb inside a gun turret besides seeing numerous ship models.

Outside is a series of monuments and weaponry you can view for free. 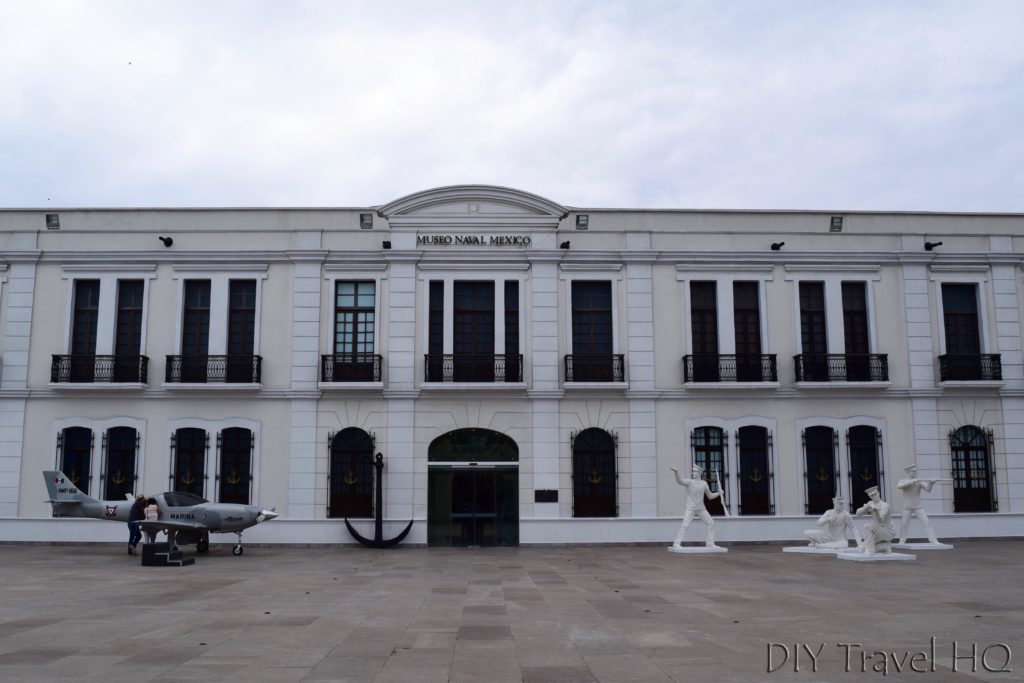 What’s with sailors and white?

The Plaza de Armas is Veracruz’s zocalo, and is lined by an attractive white-washed municipal building and church.

We were first drawn there at night time by the music emanating from the area.

There were several buskers around the square.

A large group circled around one busker, while another waited for his turn to perform. 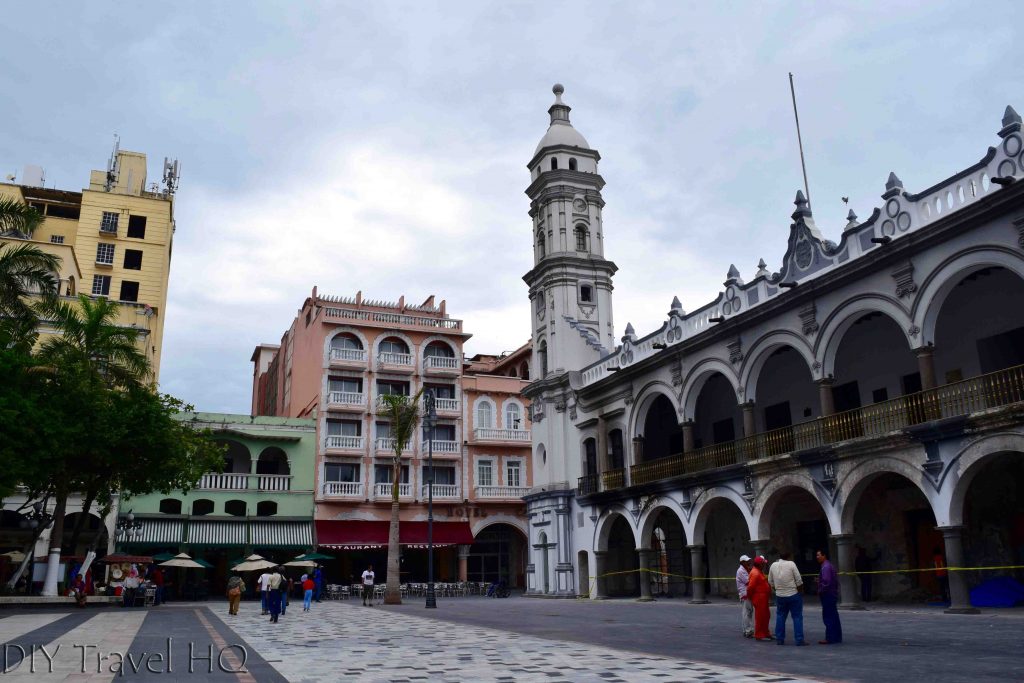 Veracruz has one of the longest Malecons in the world. It’s also one of the top Veracruz attractions

It stretches roughly 11 km from downtown Veracruz to Boca del Rio, and only gets better as you head south.

The start of the malecon is marked by Faro Carranza, and Venustiano Carranza’s statue watching over you.

Nearby is the Pemex building with several murals lining its’ foundation.

The Acuario de Veracruz is several km south on the malecon, and supposedly the largest aquarium in Latin America.

The building appeared small and tickets were expensive so we decided to skip the aquarium.

Inside, it is possible to view sharks, rays, and manatees in addition to fish. 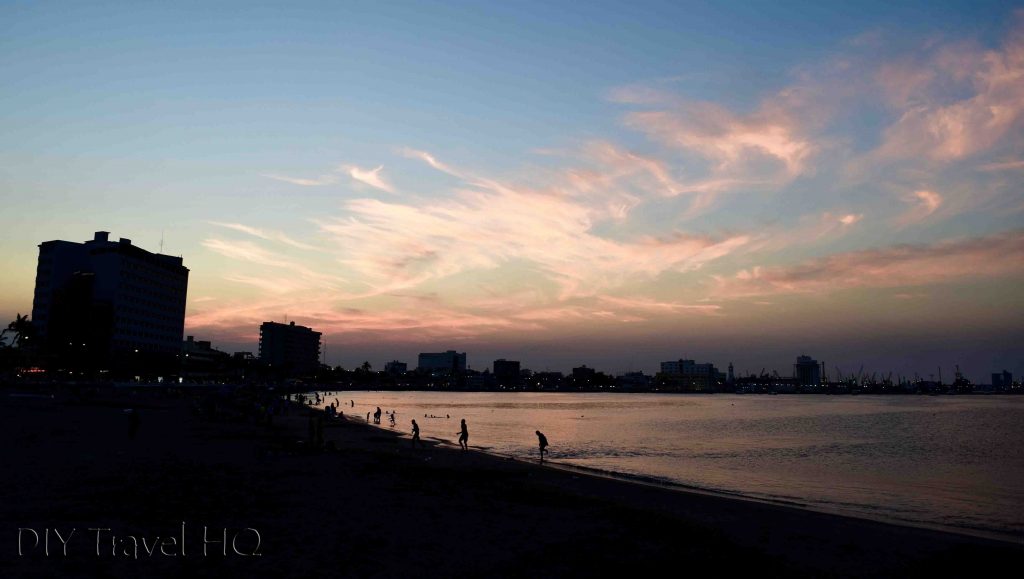 Sunset along the Veracruz Malecon

Where to Drink in Veracruz

Hit the town after checking out the top 5 Veracruz attractions.

It is located in offshoot Boca del Rio where high rise hotels line the beach, and live music venues run on the opposite side of the street.

During the day you can try Gran Café de la Parroquia for a cup Veracruz’s most famous coffee.

Veracruz is easily accessed from many cities.

Despite numerous bus hijackings in the past, there is only one day time bus to Oaxaca.

All buses take approximately 8 hours and generally leave late in the evening.

Those concerned with safety should take the morning bus, or stick with first-class buses as they are less frequently targeted.

From the ADO bus terminal, it is also possible to reach Tlacotalpan (84 pesos/$4.50, TRV bus, 2 hours), Cempoala and La Antigua. 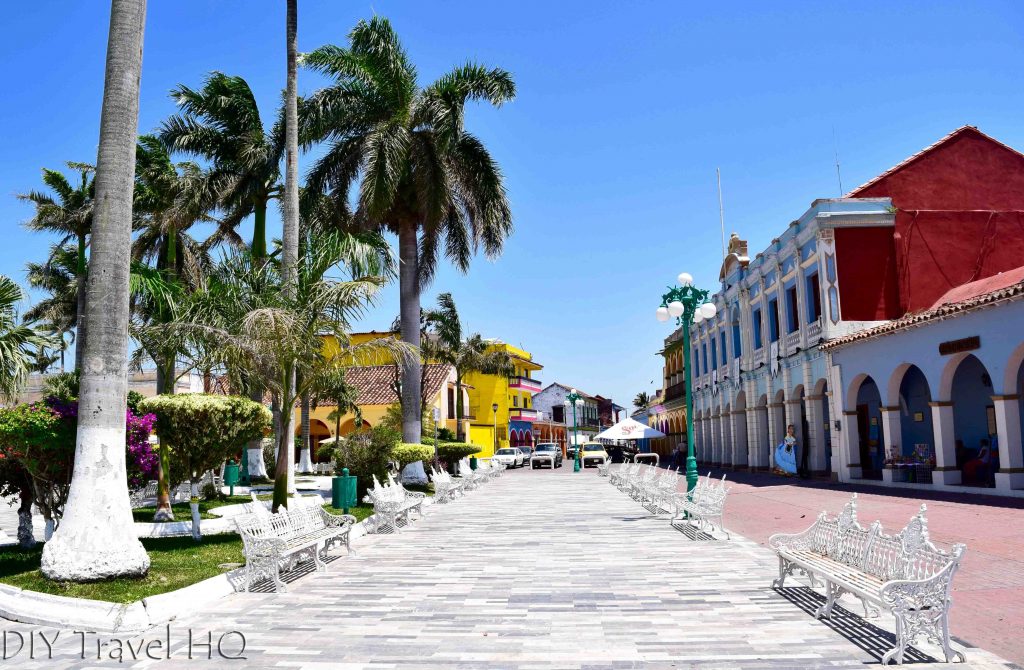 Tlacotalpan is an easy day trip from Veracruz

*** The Final Word – If transportation dictates a stopover in Veracruz, stay. Otherwise, do not go out of your way to visit ***