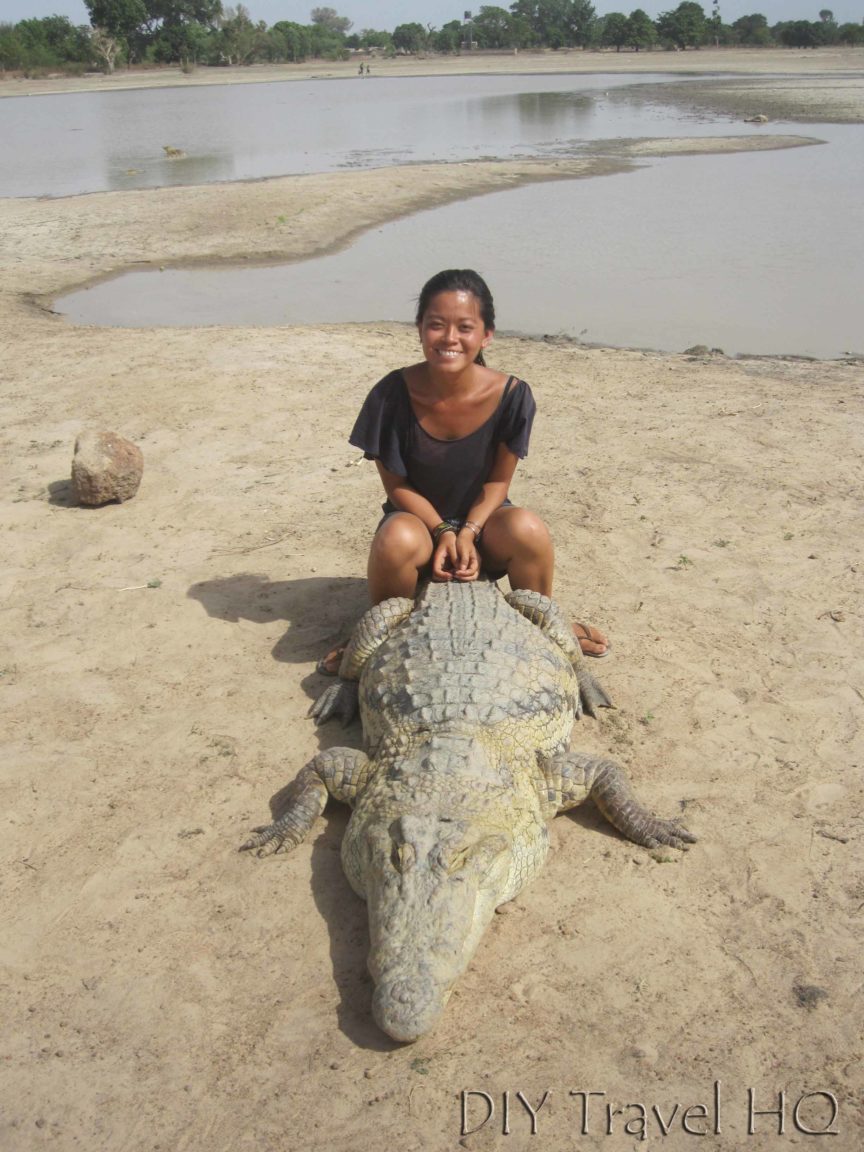 Traveling in West Africa is all about adventure & it doesn’t get any better than sitting on a crocodile in Burkina Faso – see it for yourself on our first-hand account of visiting Parc Crocodile de Bazoule!

Ouagadougou (pronounced Wa-ga-doo-goo) may be one of the coolest named cities in the world, but it’s also one of the most boring. 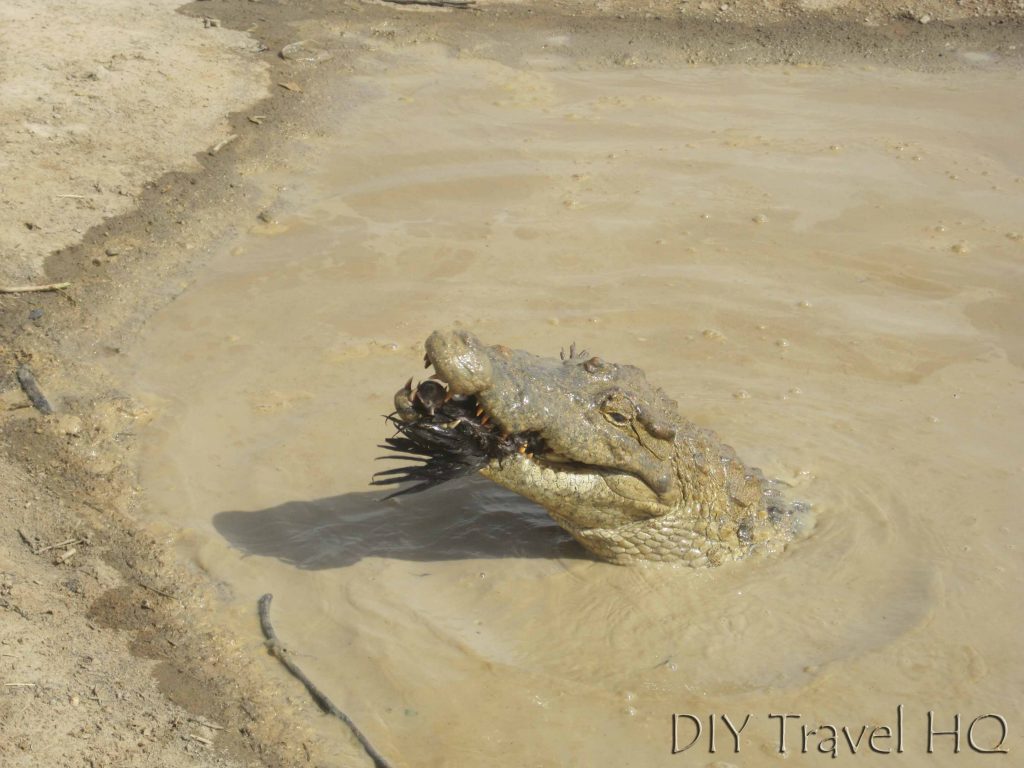 Snap! Get out of Ouagadogou & find some croc !action at Parc Bazoule

In fact, there’s not much at all to see & do in Burkina Faso as we here at DIY Travel HQ discovered on our West Africa travels in 2011.

You can, however, travel some 35km from Ouagadougou, the capital, to visit a legendary crocodile farm in the town of Bazoule – Parc Crocodile de Bazoule. 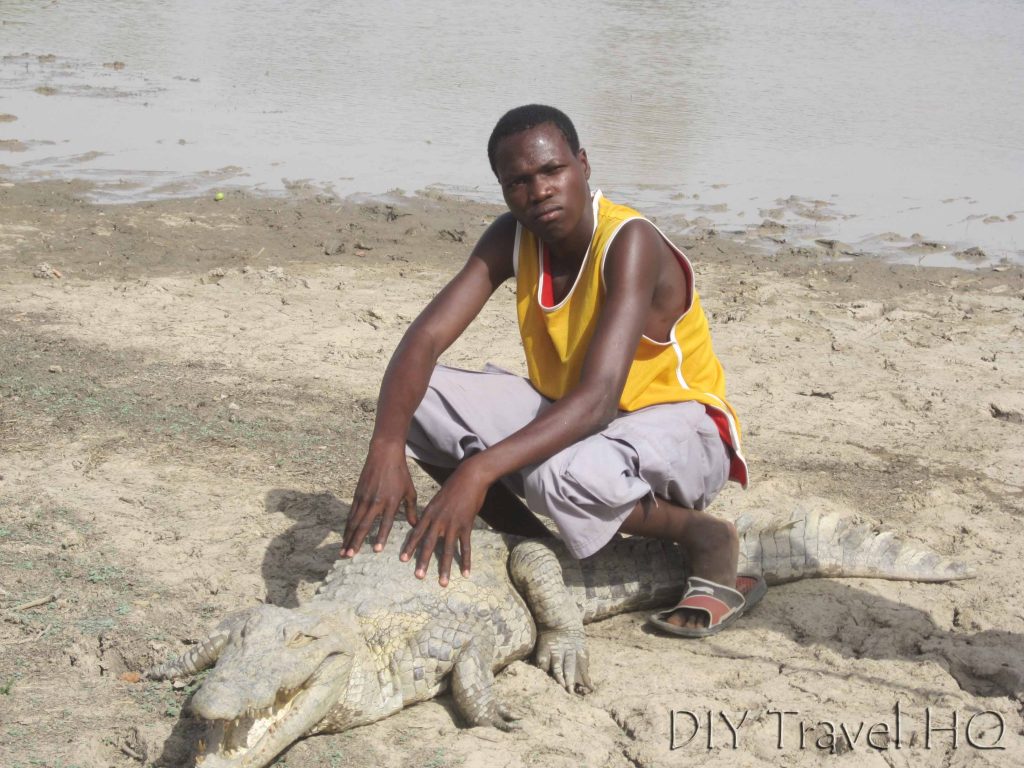 The locals show us how to sit on a crocodile!

For another few thousand, you can buy a few live chickens to feed to the crocodiles. 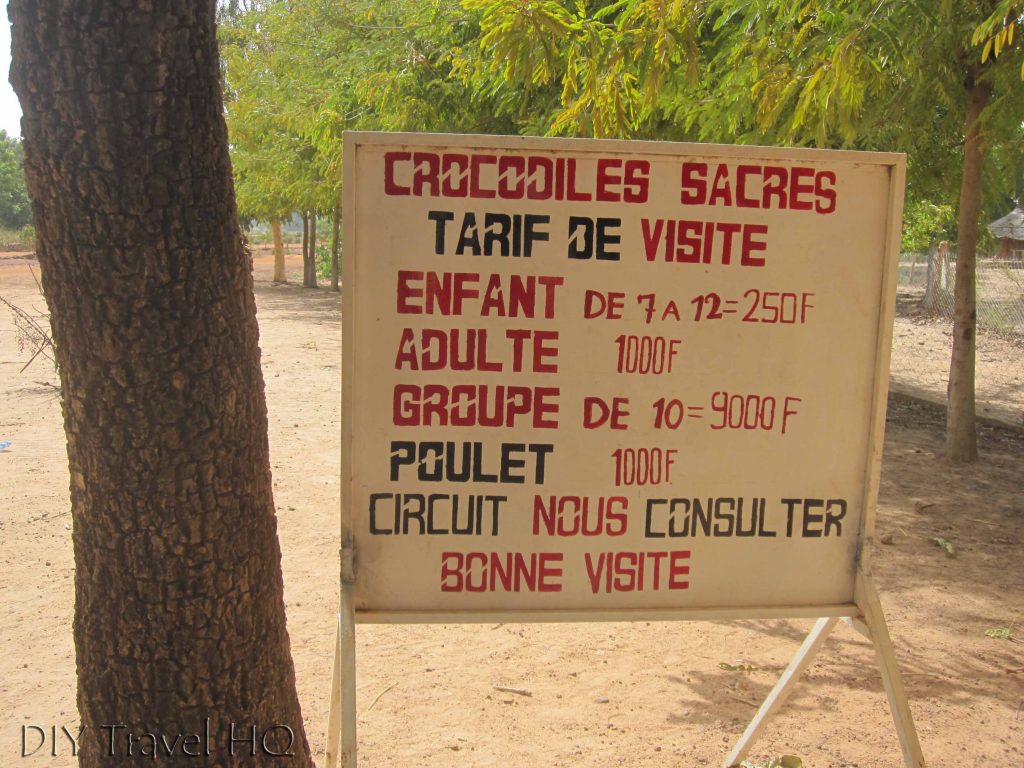 We handed over some bills to the African Crocodile Hunter-Guide, who hooked the chickens up to sticks & we all headed over to the crocodile pond.

There were about 5 or 6 crocodiles in the water. The Crocodile Hunter dangled the chickens out & they slowly started making their way onto land. We only bought 3 chickens, but these weren’t stupid crocs – they knew the odds were against them, but played along with the game, and came out to meet us. 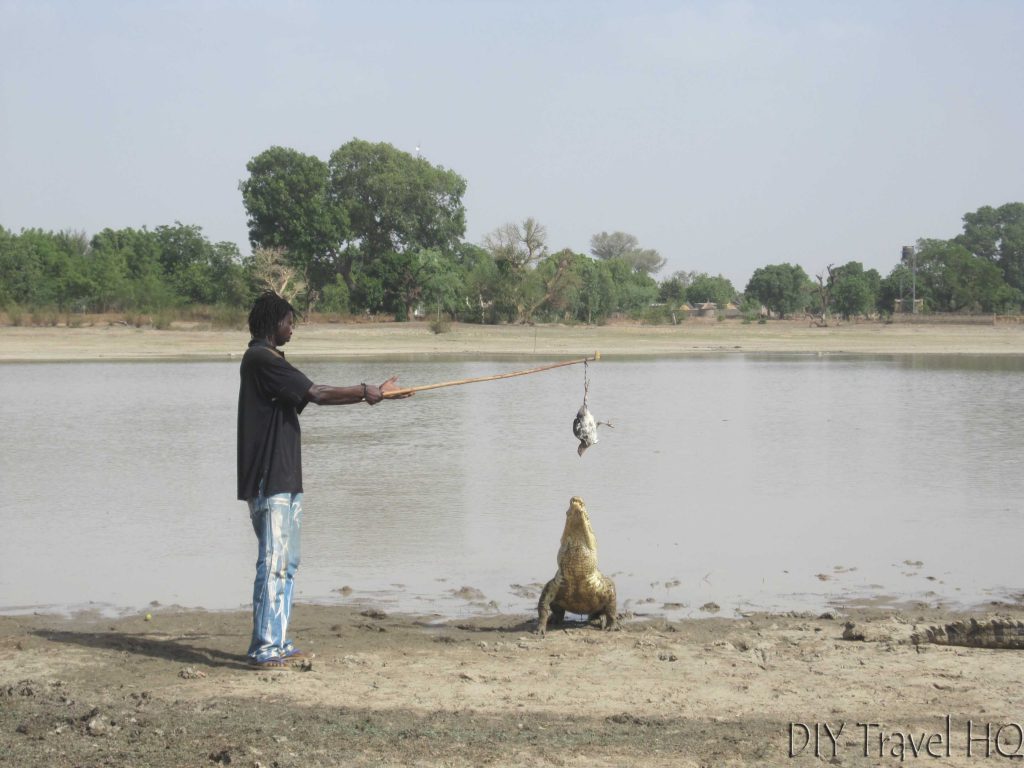 The African Crocodile Hunter lures the a croc out of the water with our chicken!

The Crocodile Hunter kept nudging us towards them, insisting it was safe… I didn’t need much convincing, anything for a photo right…

The next minute, I was touching a crocodile, sitting on it, lying on it & holding up it’s tail. Oops. 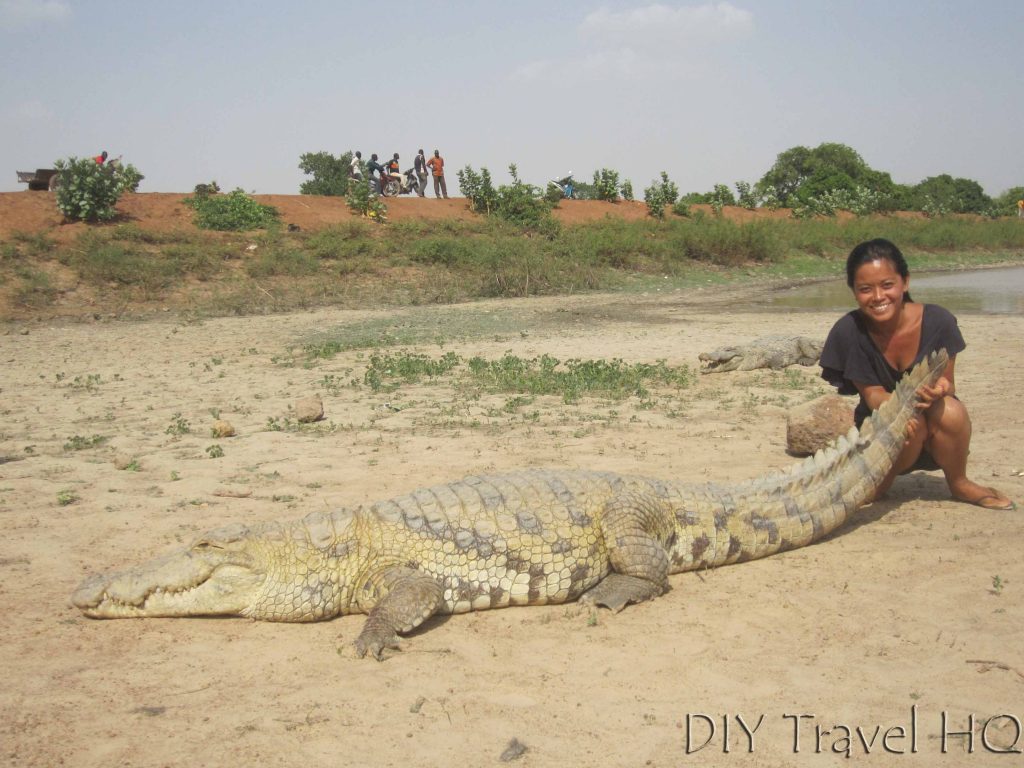 Here I am holding up the croc’s tail!

The crocs were all incredibly placid & had definitely been tourist-trained, similar to the crocodiles we saw in Tampico, Mexico.

It was a crazy, surreal & very African experience.

I wish we bought more chickens. 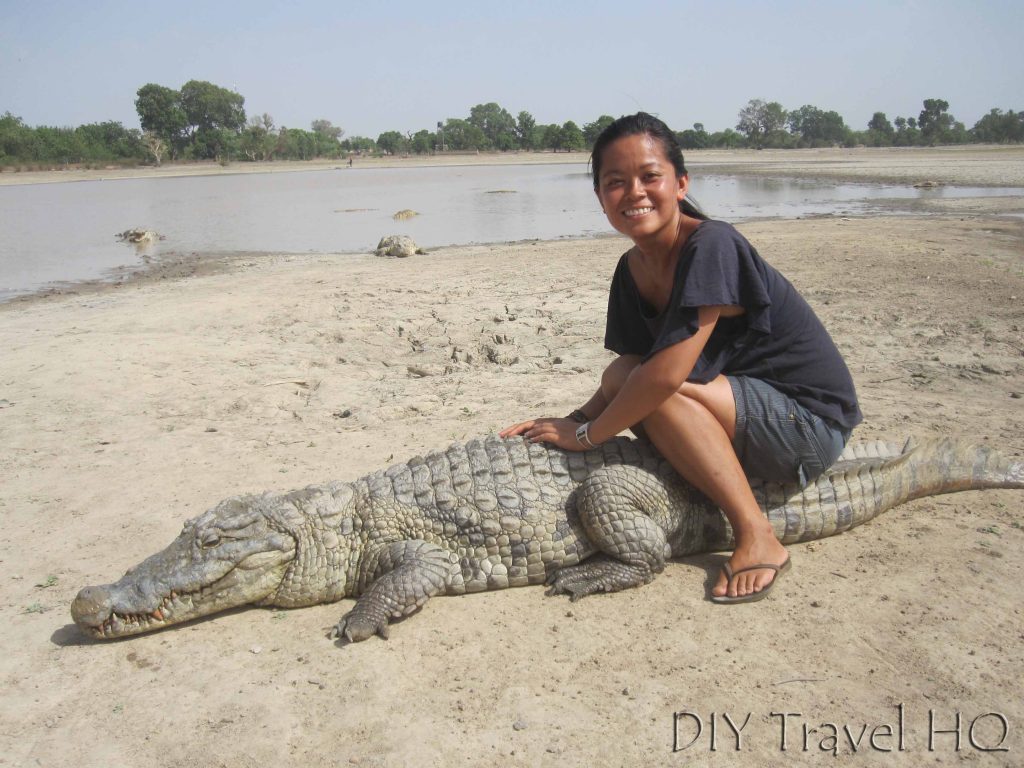 Pat on the back for the crocodile for not attacking me!

The scariest part of the day was getting to & from the crocodile farm – riding on the back of a motorbike with my travel buddy who had never ridden before, through peak hour Ouagadougou traffic, roundabouts, highways & red dirt roads. 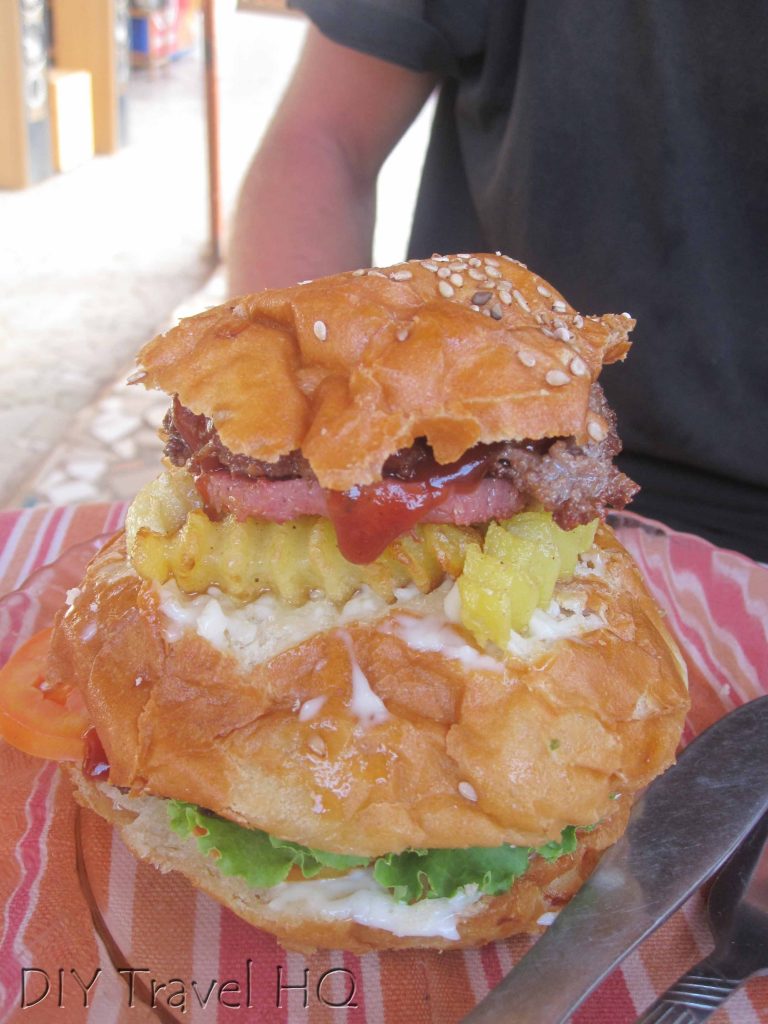 I’ve never seen a burger quite like this before! Bring it!