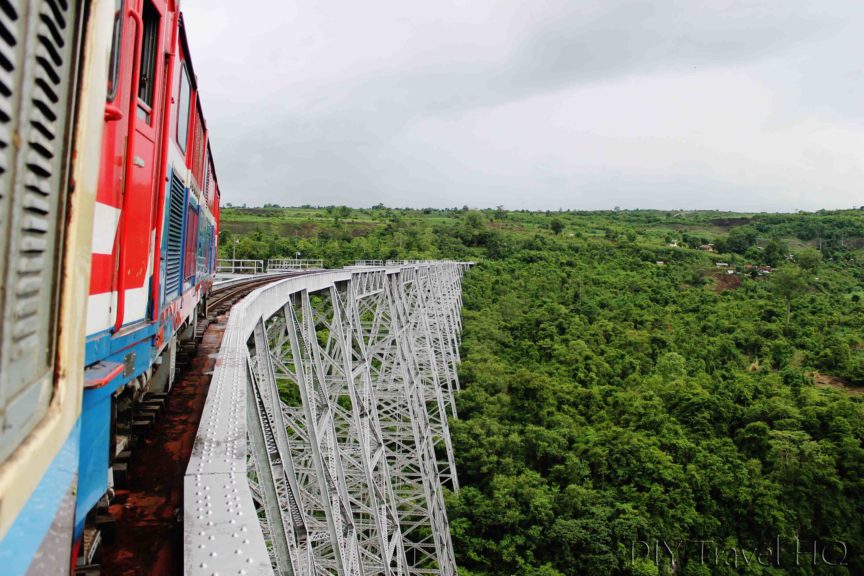 Cross the Gokteik Viaduct on an exciting train journey from Hsipaw to Pwin Oo Lwin… find out schedules & prices & more – can you handle the vertigo?!

Another of Myanmar’s wonderful train journeys is the route crossing the Gokteik Viaduct between Mandalay and Lashio. 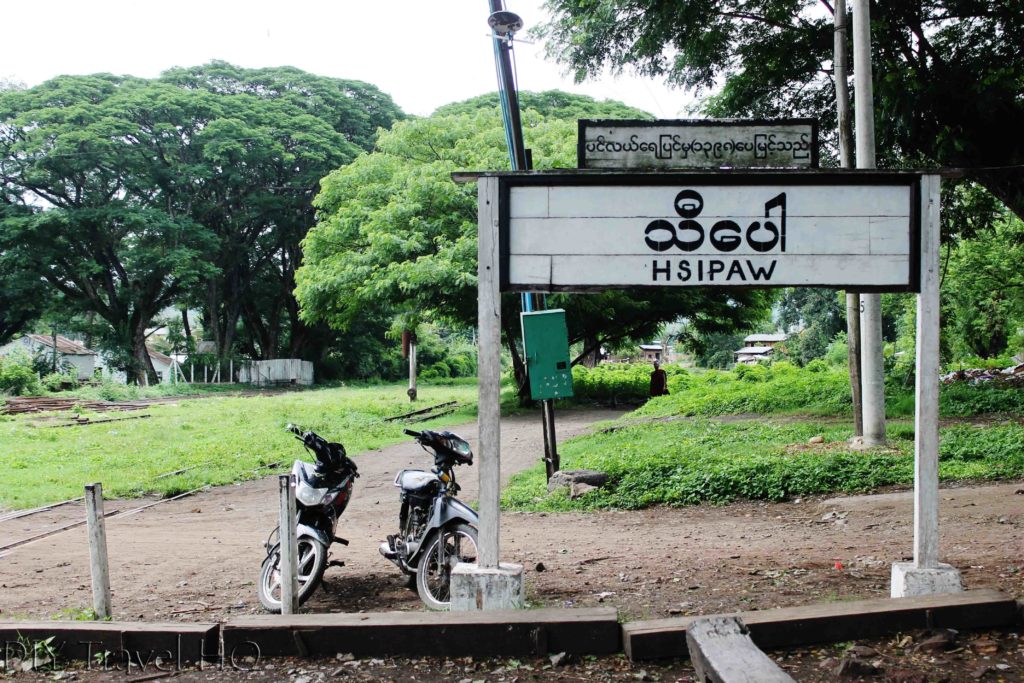 As an alternative to the full 15hr trip, the course between Hsipaw and Pwin Oo Lwin is a popular option linking the two most popular cities in Upper Myanmar. 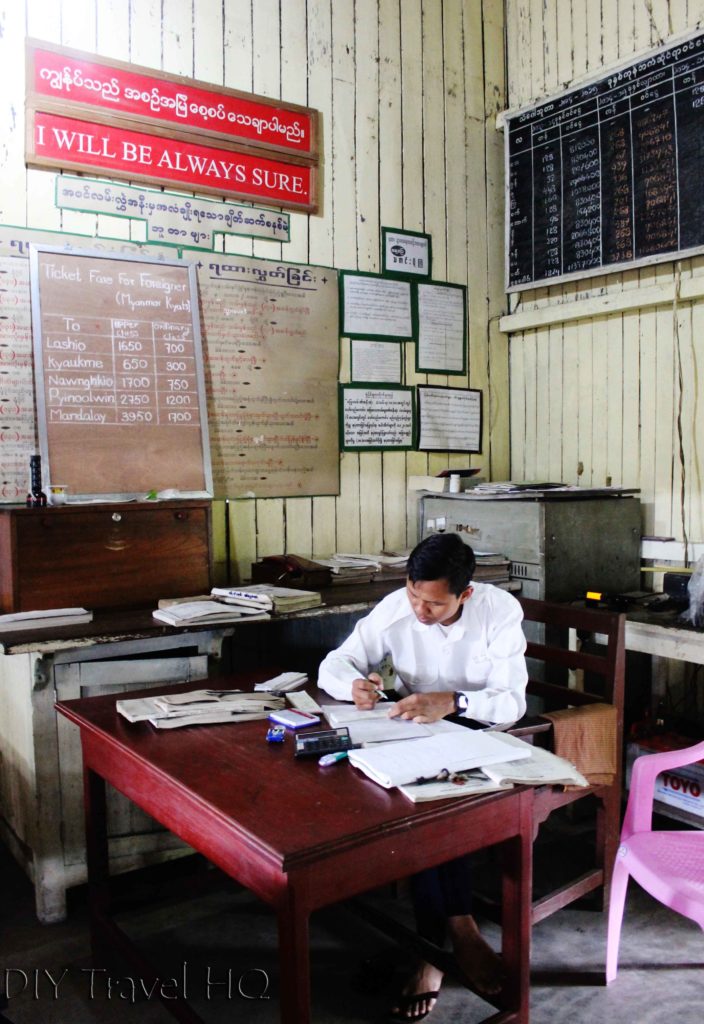 Buy your ticket in an office inside Hsipaw train station

The train is Myanmar’s everyday run-down relic of the 1950’s, comprising of old Chinese carriages and characterised by worn wooden benches, steel rails of the upper luggage compartments and light through the slits of the open-and-close metal window shutters. 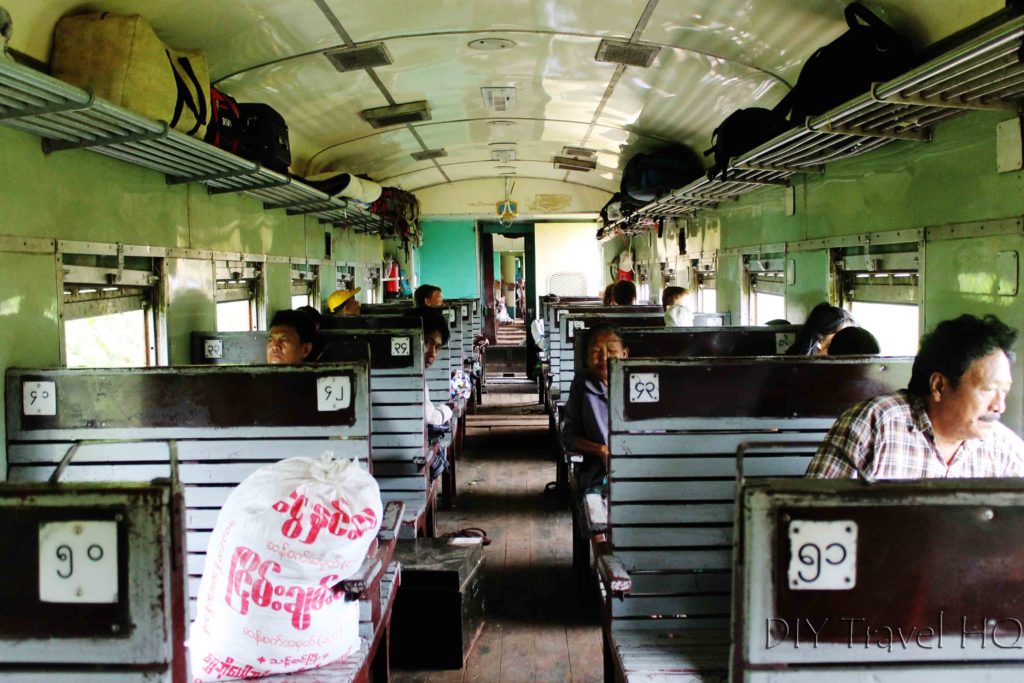 Inside the Gokteik Viaduct train carriage

The train rocks hard from side to side… Locals are sleeping and smiling, hawkers are on and off board, the hillside scenery is pleasant and lush, though often obscured by trees and think bushes.

55kms and 4 hours into the downhill journey, the surprisingly steadily-moving train slowly approaches its highlight/high point, the Gokteik Viaduct. 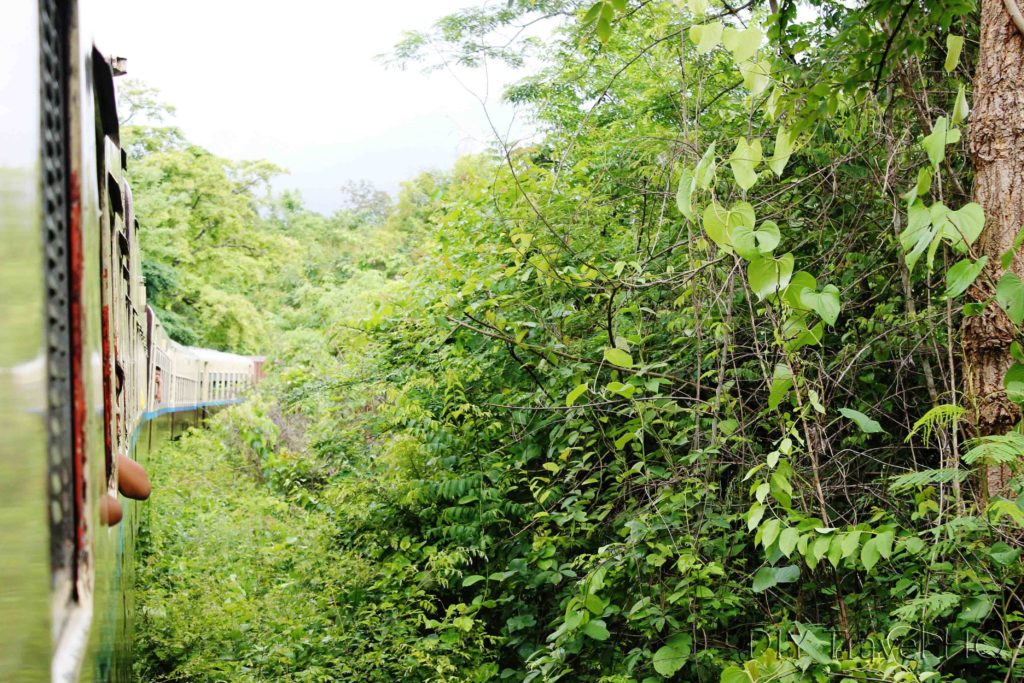 The train slows down as it approaches the Gokteik Viaduct

One of Myanmar’s greatest man-made achievements, the bridge was constructed by an American firm on behalf of the expanding influence of the British empire.

When completed (in just 9 months) in 1903, the trestle was the 2nd highest railway bridge in the world. 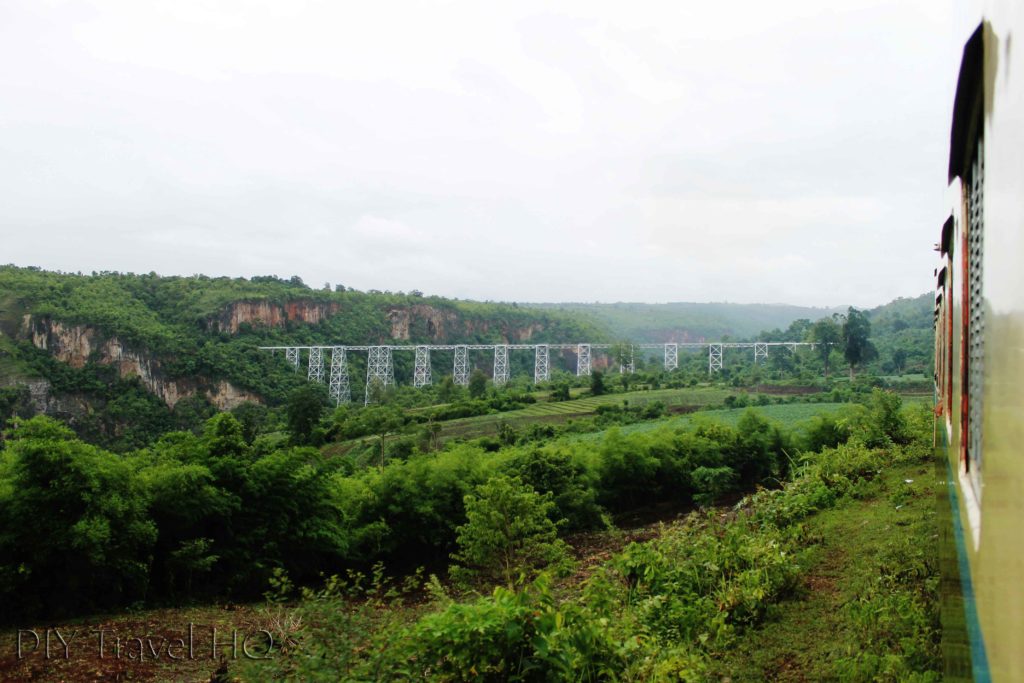 A British insurance policy abetted the Burmese government’s lack of maintenance on the bridge, however since expiring, the government has taken more responsibility in its preservation and upkeep – this important link to the past is also of military strategic significance. 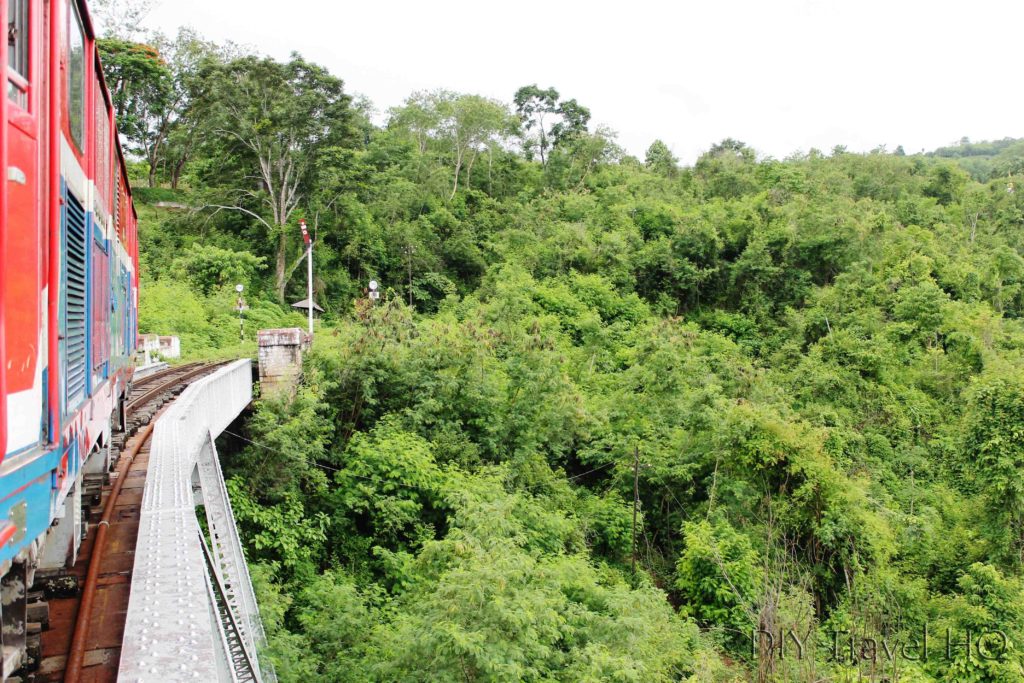 Nevertheless, it is an antiquated and aging, frail and fragile structure.

On advance, the train slows to a crawl, so as to avoid placing undue pressure.

Entering and exiting the black crevasse of a rock-carved tunnel, the train slowly curves onto the narrow single-line gauge of the viaduct. 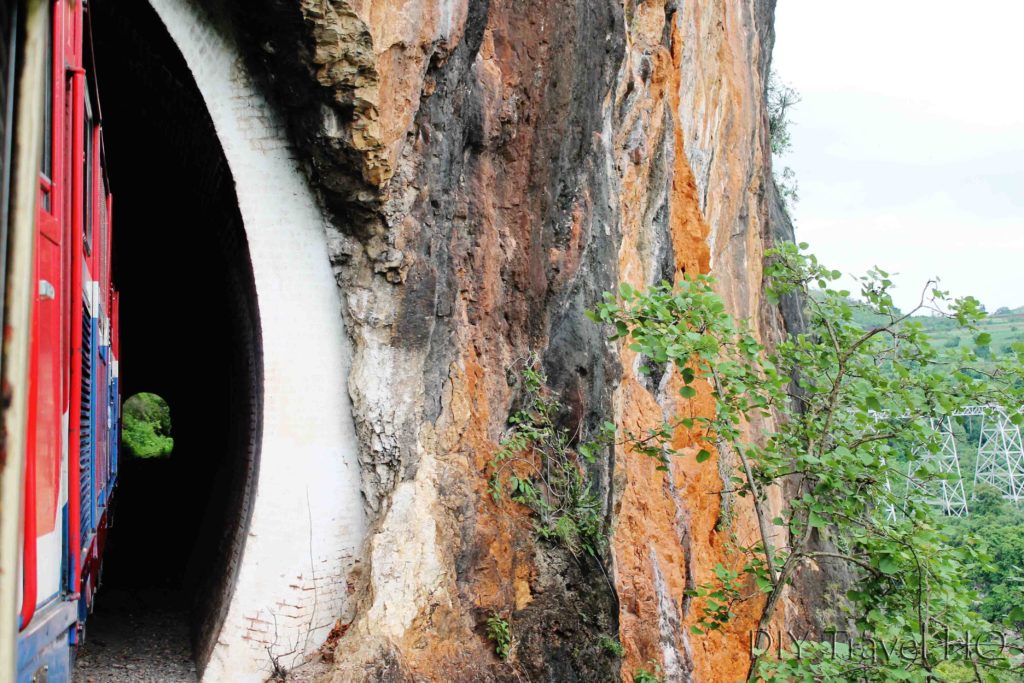 Entering the Gokteik Viaduct through the rock-carved tunnel

It crosses at snail’s pace, with plenty of time for both appreciation and alarm, particularly for sufferers of vertigo – fortunately that’s not either of us here at DIY Travel HQ.

Doors and windows are open, heads and limbs stretching in and out, looking around at the cliffs and vegetation, looking down at the deep river gorge far far below.

The train just fits on the tracks – seemingly, without a millimetre to spare. It is goosebump inducing, yet thrilling, literally a step away from descent and downfall.

Safely on the other side, the viaduct gleams in the passing distance as a monumental feat of early 20th century railway engineering. 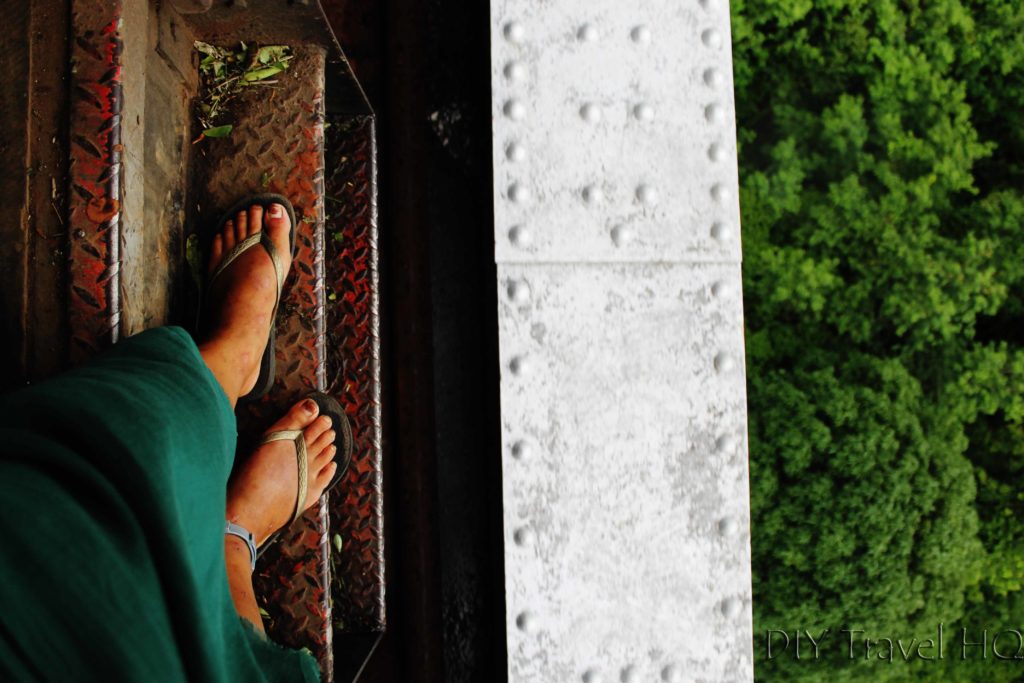 Living on the edge on the Gokteik Viaduct

Did you enjoy reading Onboard the Gokteik Viaduct Train from Hsipaw? 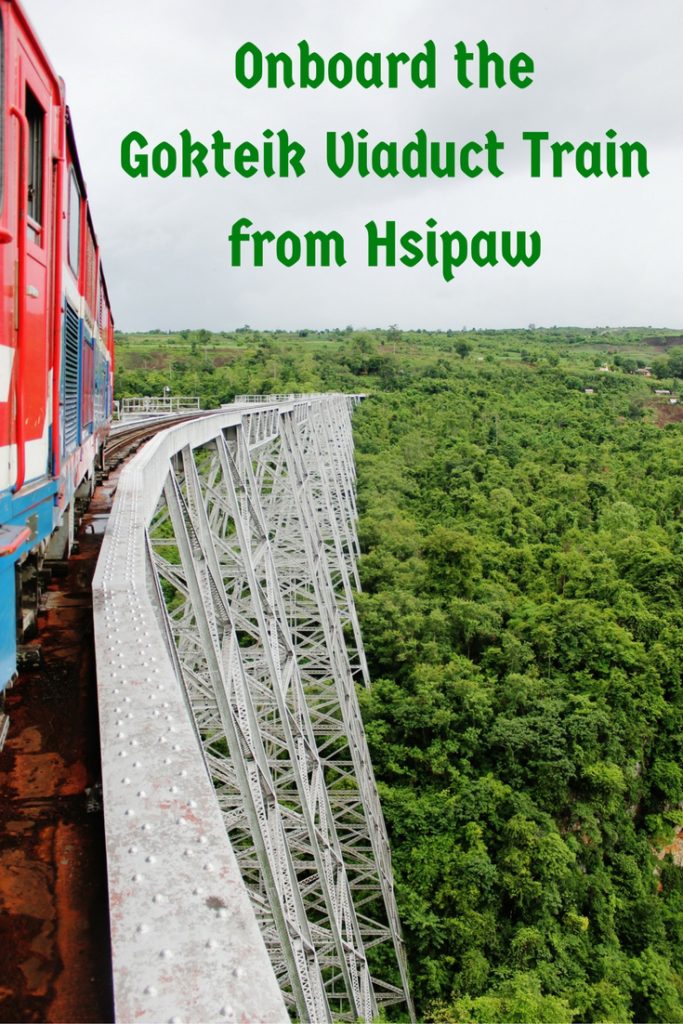 *** The Final Word – Crossing the Gokteik Viaduct is the most unique train adventure in Myanmar! ***

Have you travelled across any other viaducts in the world? 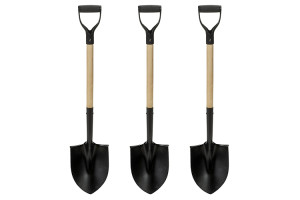