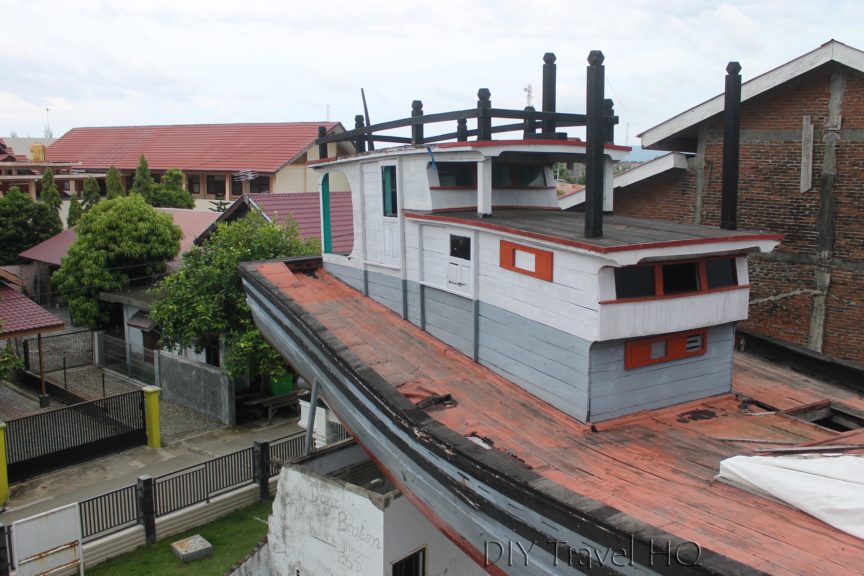 Take the morning ferry from Pulau Weh & spend half a day visiting the various landmarks on a self-guide Banda Aceh tsunami tour – find out the top 7 sites not to miss.

A decade after the 2004 Boxing Day tsunami, Banda Aceh has been resurrected & rebuilt – but memories & monuments of the disaster still linger around every corner, some of which you can visit on a self guided Banda Aceh tsunami tour.

Just past midnight on 26 December 2004, a 9.3 magnitude earthquake struck the west coast of Sumatra, followed closely by a catastrophic tsunami. Banda Aceh was the closest major city to the epicenter & bore the brunt of the damage & destruction.

The first tsunami reached the shores of Banda Aceh just 20 minutes after the earthquake. Residents were taken completely by surprise, as surging waves over 30m travelled 4km inland.

The houses & buildings that managed to survive the earthquake were now either completely destroyed or swept away by the tsunami. 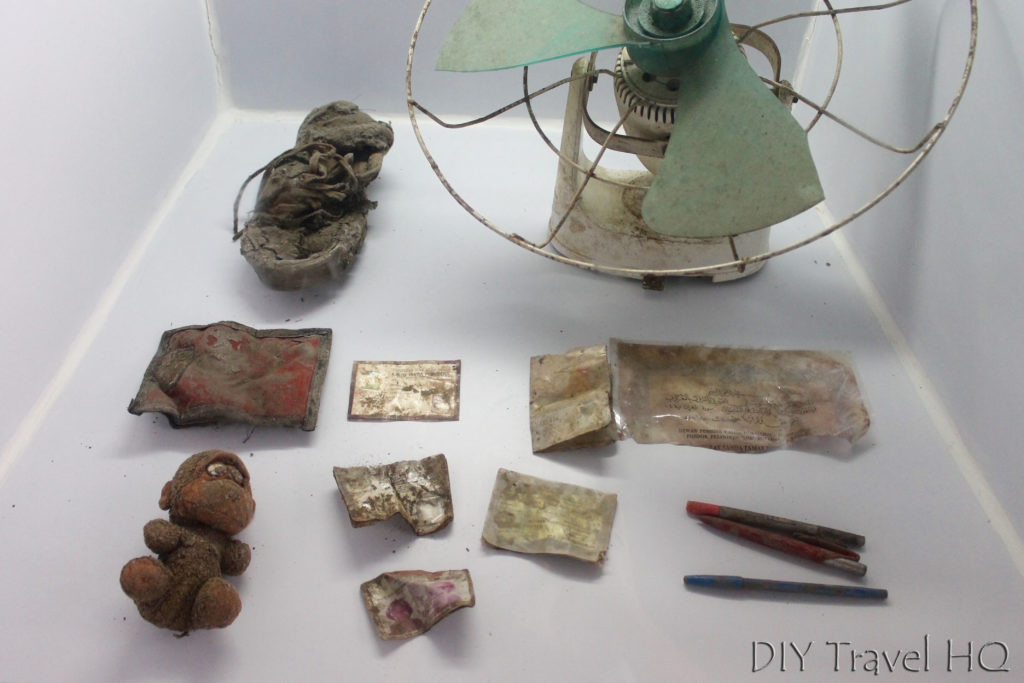 Objects & artefacts from the Tsunami Museum

While the tsunami brought tragedy & catastrophe, it was also the catalyst for peace. It brought to an end to decades-long fighting between the government & separatist rebels (Free Aceh Movement) & so far peace is still holding.

These days, Aceh keeps 70% of its oil & gas revenue & is the only province allowed to have local political parties in elections.

Sharia law has also now been enforced, something for travellers to keep in mind.

Undoubtedly, the people of Banda Aceh are devoutly Muslim but in this part of Indonesia, the locals are laid-back & life is more agreeable.

Countries all over the world pledged US$14 billion for affected regions of the earthquake & tsunami, & the spoils of this aid can be seen in the complete reconstruction & modernization of the city.

And for the first time, many locals also had the opportunity to make money. Alongside the paved roads & freshly painted buildings are new cars, motorbikes & cellphone shops.

In Banda Aceh, the Boxing Day disaster is never far from your thoughts, but the future is deservedly bright for this city that has endured so much – which you’ll be able to see for yourself on a self-guided Banda Aceh tsunami tour. 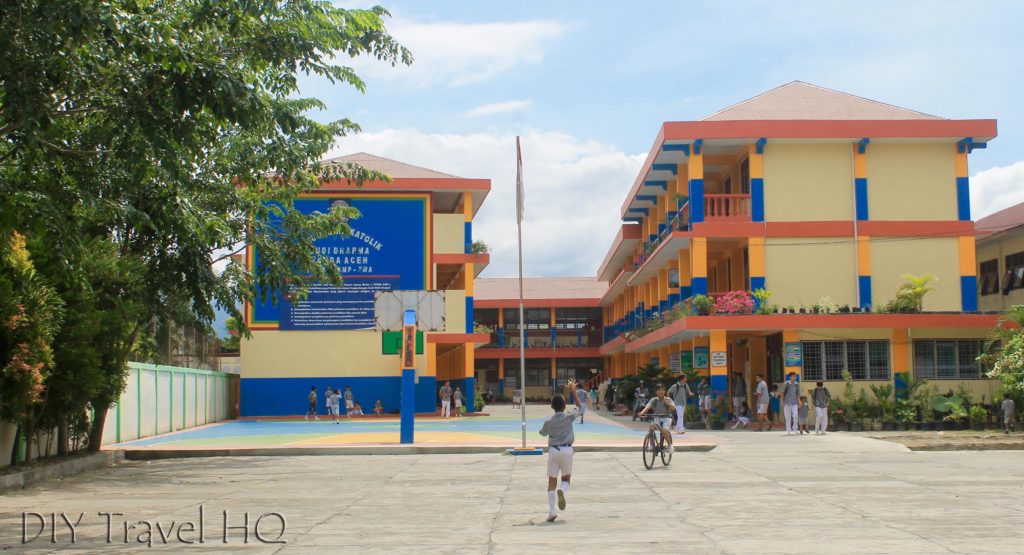 A colourful, new school next to the Dutch military cemetery

Seeing Banda Aceh with your own eyes allows you to understand the scale of the disaster.

While some might find it distasteful, the concept of a Banda Aceh tsunami tour is something that the city of Banda Aceh itself is promoting.

If you are coming from diving Pulau Weh, take a morning ferry & spend half a day visiting various landmarks on a self-guide Banda Aceh tsunami tour, before taking a night bus to Medan.

Banda Aceh is not a bad place to spend a night or 2 either, if you have the time. 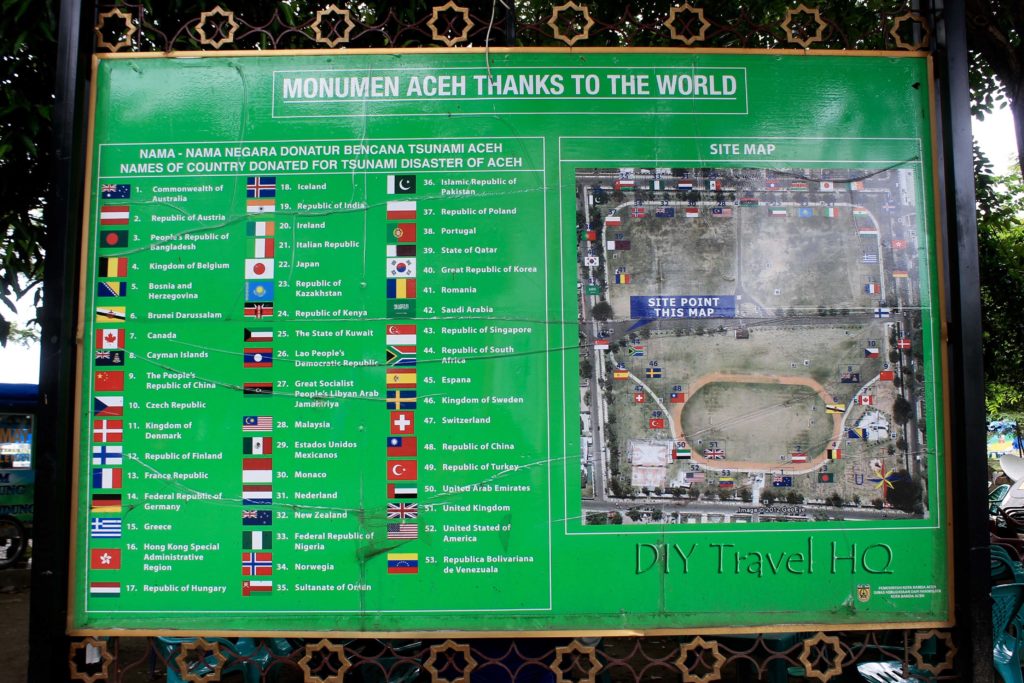 Monument Thanks to the World park

From the Ulee-lleue ferry terminal, the main road passes one of several mass burial grounds in the city.

The Ulee-Lheue graves were our first stop on our DIY self-guided Banda Aceh tsunami tour.

We walked here after getting off the ferry from Pulau Weh but you can also take a becak. The site is on your right, marked by a large green entrance.

The place is also known as “Tsunami Ground Zero” as the Uleh-lheue village was the worst-hit area when the waves struck. 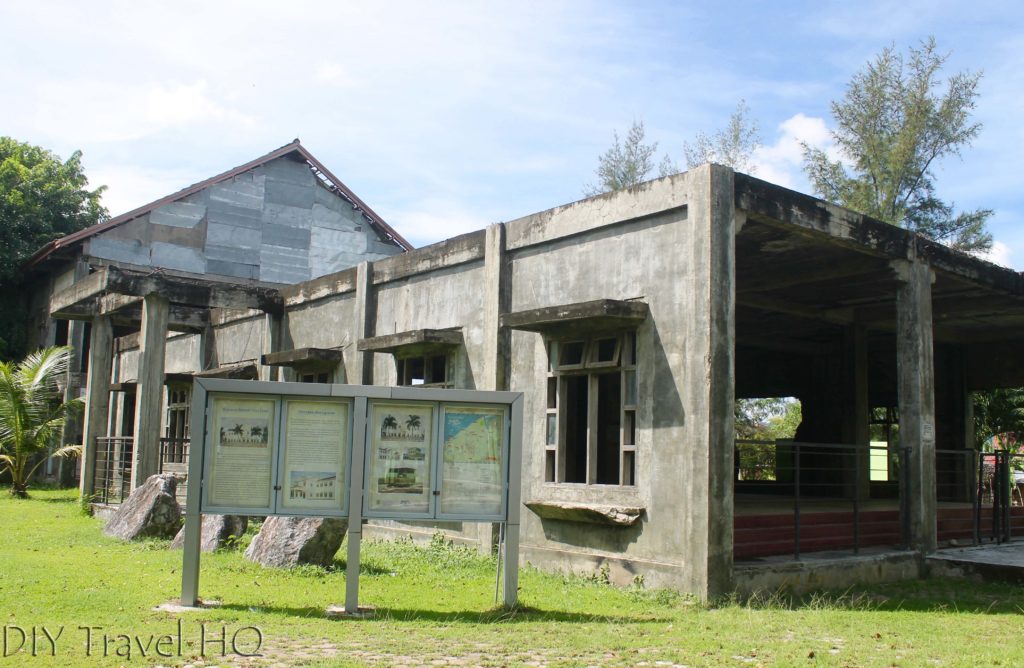 Ulee-Lheue mass graves on the site of an old hospital

The graves are on the site of an old hospital, which was treating victims of the earthquake when the tsunami arrived less than 1 hour later.

Today, the grounds are a mass grave where over 14,000 people are buried.

At the back of the hospital/mass graves is the Tsunami & Disaster Mitigation Research Centre (TDMRC). 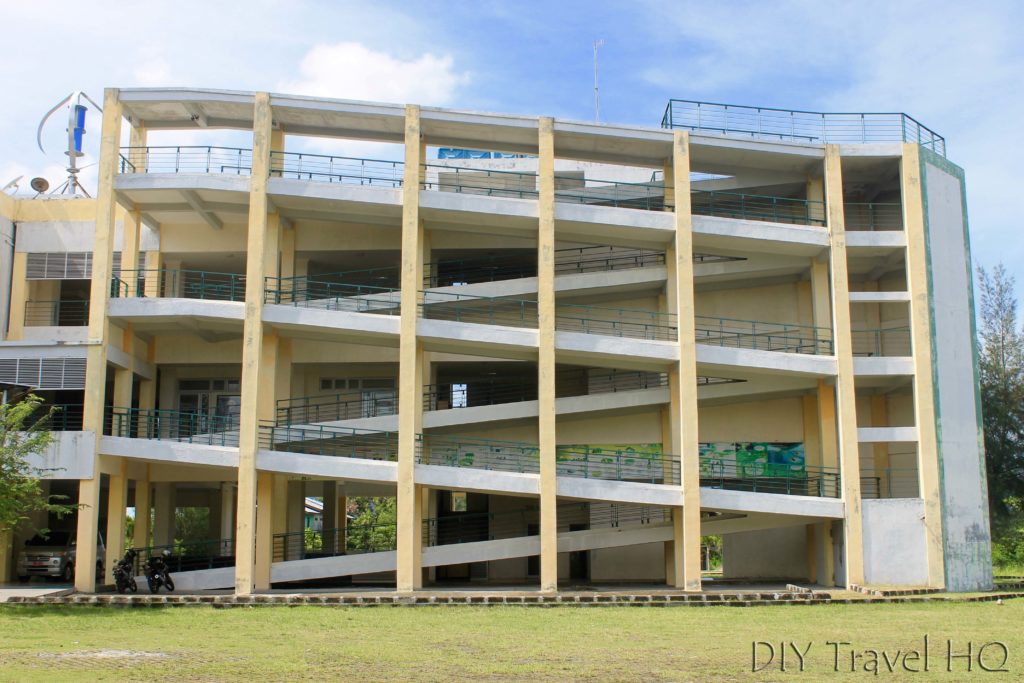 It was established by the University of Syiah Kuala, with the purpose of minimizing tsunami & disaster risk.

The Centre also facilitates the co-ordination of reconstruction & rehabilitation between the government & the community.

We didn’t visit the centre, but there’s a helicopter wreck nearby. 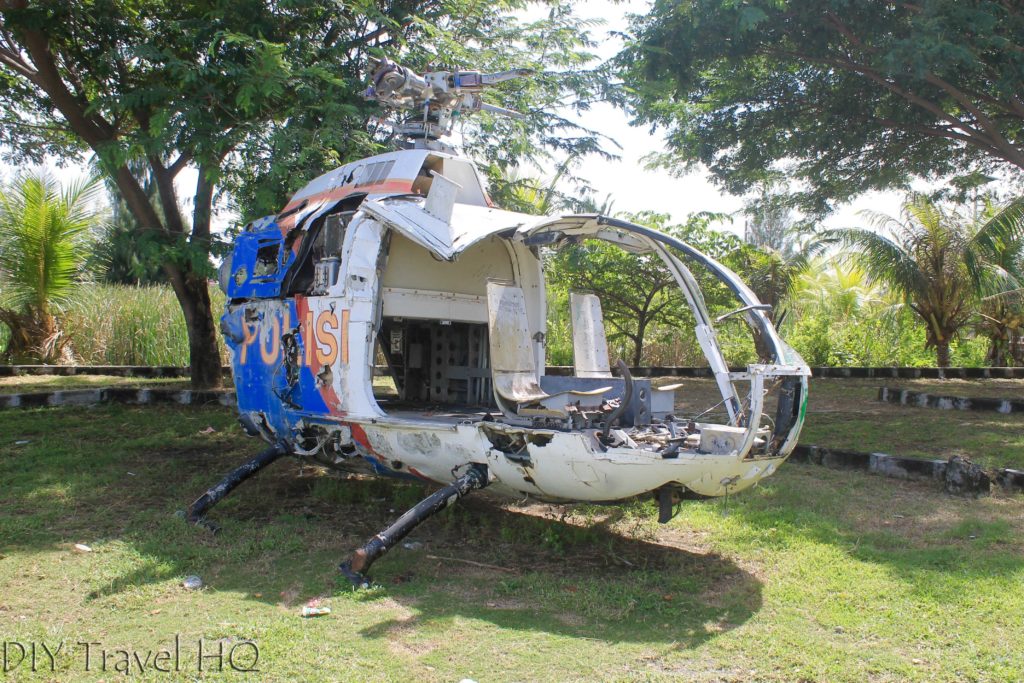 A helicopter wreck from the tsunami

The Aceh Tsunami Museum was built as a symbolic reminder of the Boxing Day tsunami.

The 2nd stop of this self-guided Banda Aceh tsunami tour, the museum is also an education center and  emergency disaster shelter in case of another disaster.

The entrance sets the scene – you walk through a darkened passageway of noises & walls seeping water, meant to recreate the dread of the tsunami. 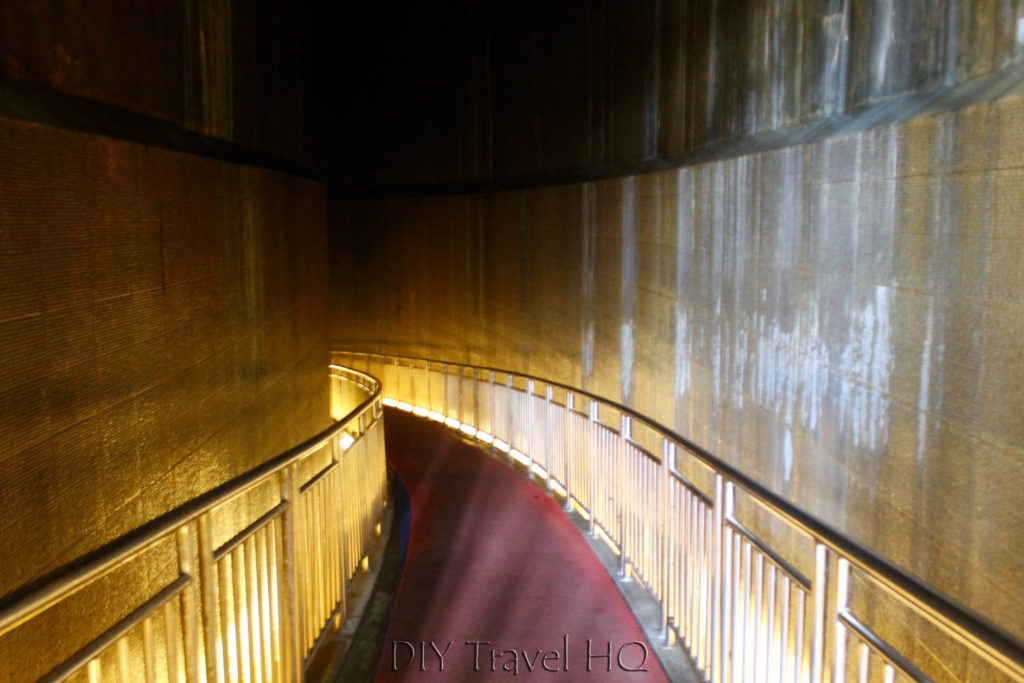 The entrance to the museum recreates the dread of the tsunami

The architecture is impressive, designed by Indonesian architect Ridwan Kamill.

Its long, curving walls, over 4 levels, resembles a large ship or something like a Noah’s Ark. 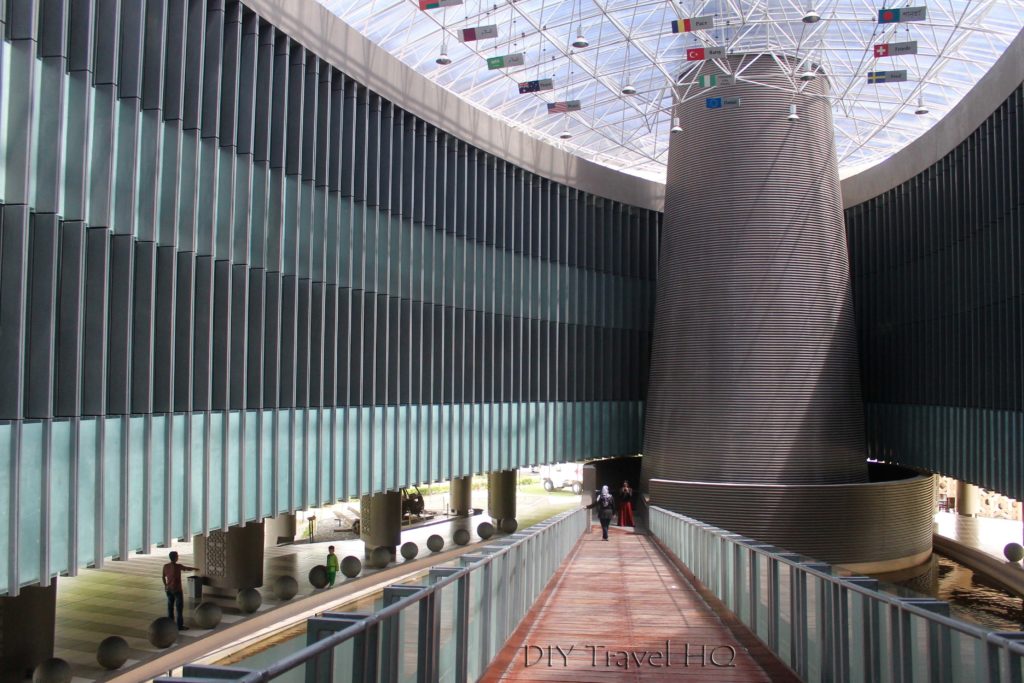 Stunning architecture of the Tsunami Museum

The museum is well laid-out, with many different exhibits such as the international aid effort & geological rooms explaining how tsunami’s & earthquakes happen. The children’s educational focus, with animated videos, is particularly commendable.

But overall it feels a little detached, hollow & cold. It’s like the museum is still coming to terms with its scope & scale & hasn’t quite found it’s groove. Oh & it needs more English explanations.

Nevertheless, it’s free to enter & definitely still worth a visit on a Banda Aceh tsunami tour.

You can leave your bags at the entrance when touring the museum (or even for the day) but they’re unguarded. There are no lockers. 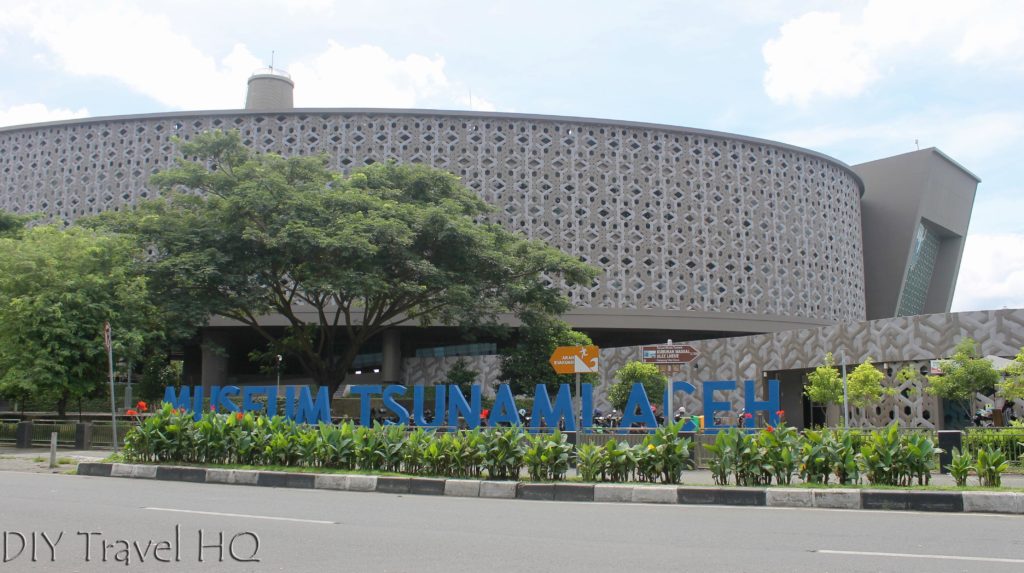 It’s also an education center and an emergency disaster shelter

Next to the Aceh Tsunami Museum is a Dutch military cemetery, the final resting place of over 2,000 Dutch & Indonesian soldiers who died fighting the Acehnese.

It’s the largest Dutch military burial ground outside of the Netherlands.

The site has been well-maintained – by the colonized of the graves of the occupiers, none the less. 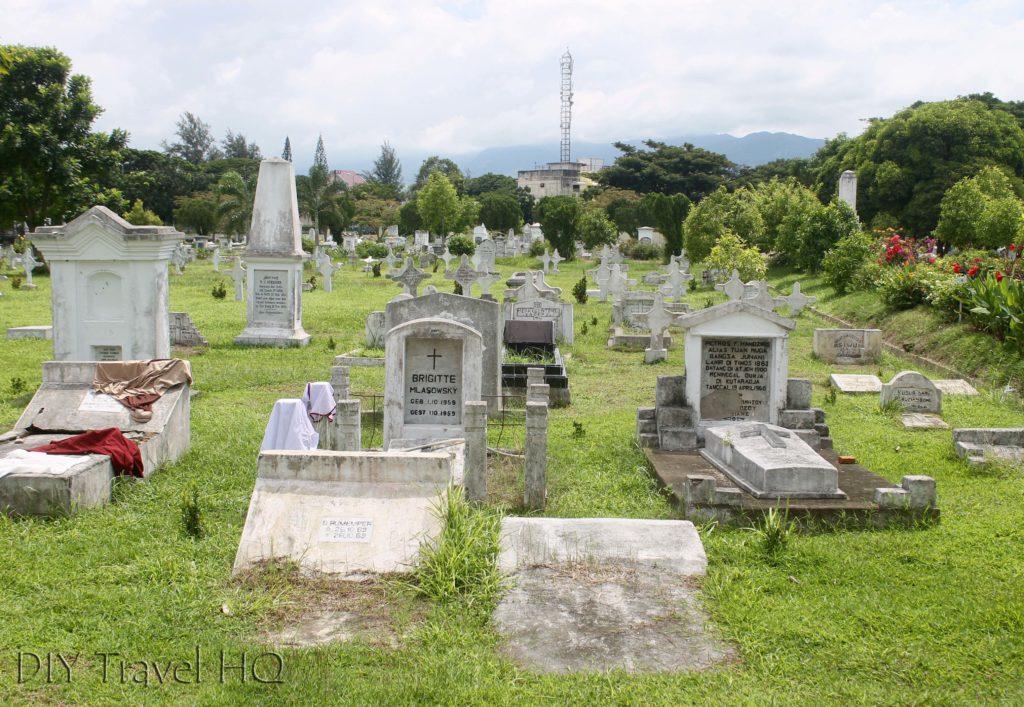 Inscribed tablets on the walls of the entrance gate list the names of the dead soldiers.

The cemetery suffered only minor flooding from the tsunami. Conveniently located next to the Aceh Tsunami Museum, it’s worth a quick stop on a self-guided Banda Aceh tsunami tour

The PLTD Apung 1 is one of the symbols of post-tsunami Banda Aceh.

This 2,600 ton electric generator ship was at sea when it was swept 2-3km inland by the tsunami. When it stopped, it crashed into 2 homes, killing those inside.

The vessel stopped near Uleh-lheue but has since been moved closer to the city centre.

It’s about a 1km walk from the Aceh Tsunami Museum. 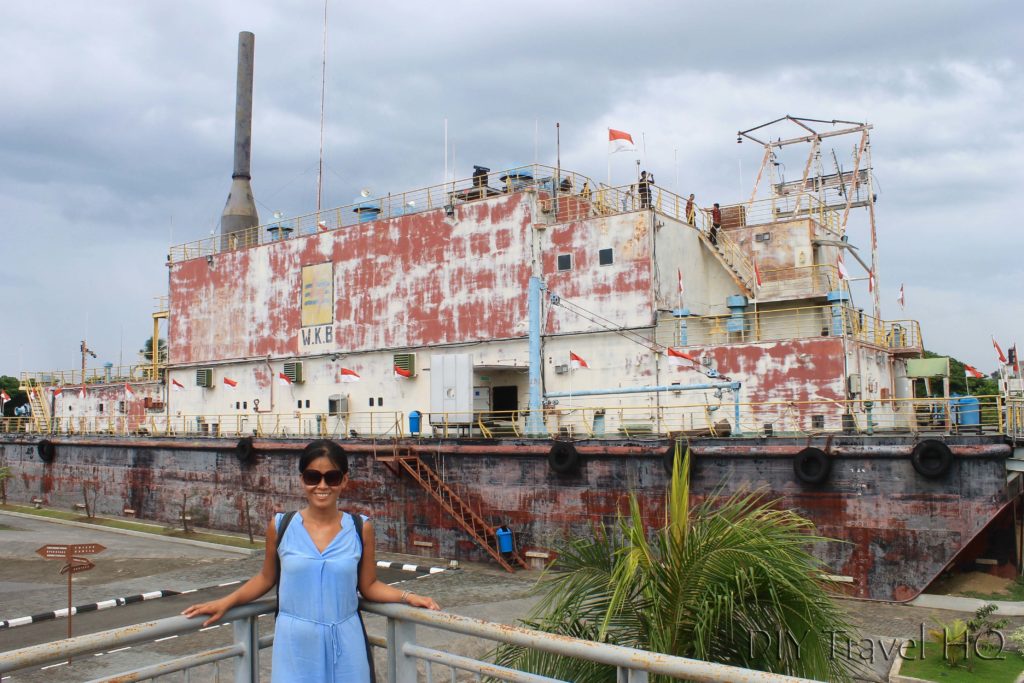 In 2012 the ship was renovated, with a monument, viewing platforms & a walking path.

The inside has been converted into a museum with information about the tsunami & the ship itself – most of it is in Indonesian but the images speak for themselves. 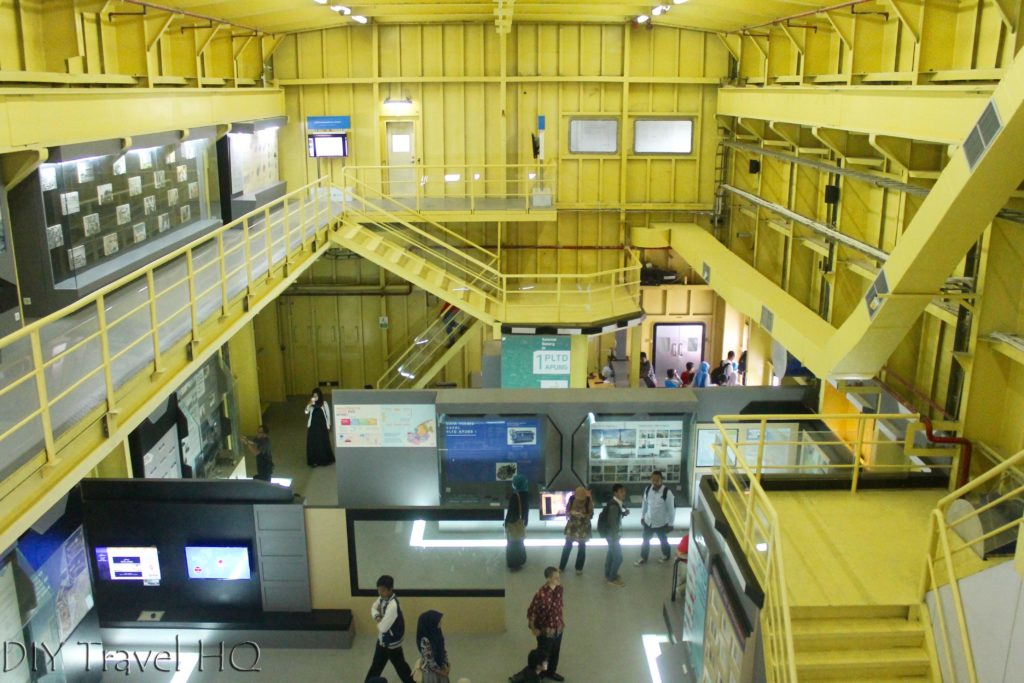 The inside of the ship has been converted into a museum

You can also walk around & climb to the top of the ship, which has good views of the city: 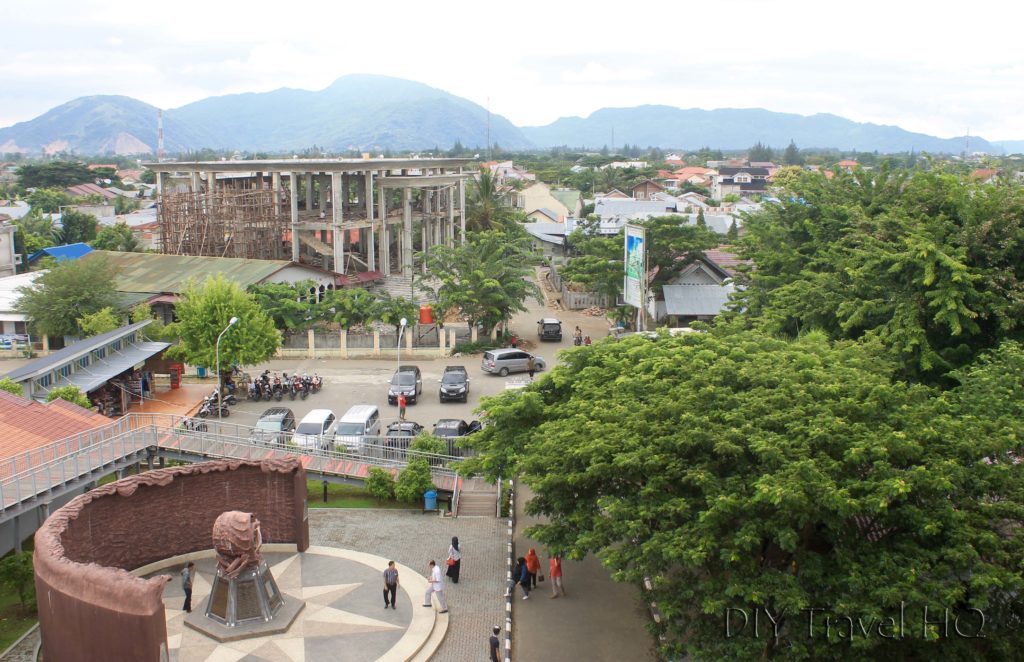 Great views from the top of the ship

This “Floating Diesel Plant” is one of the more unusual tourist attractions you’ll ever come across but it’s also absolutely fascinating. 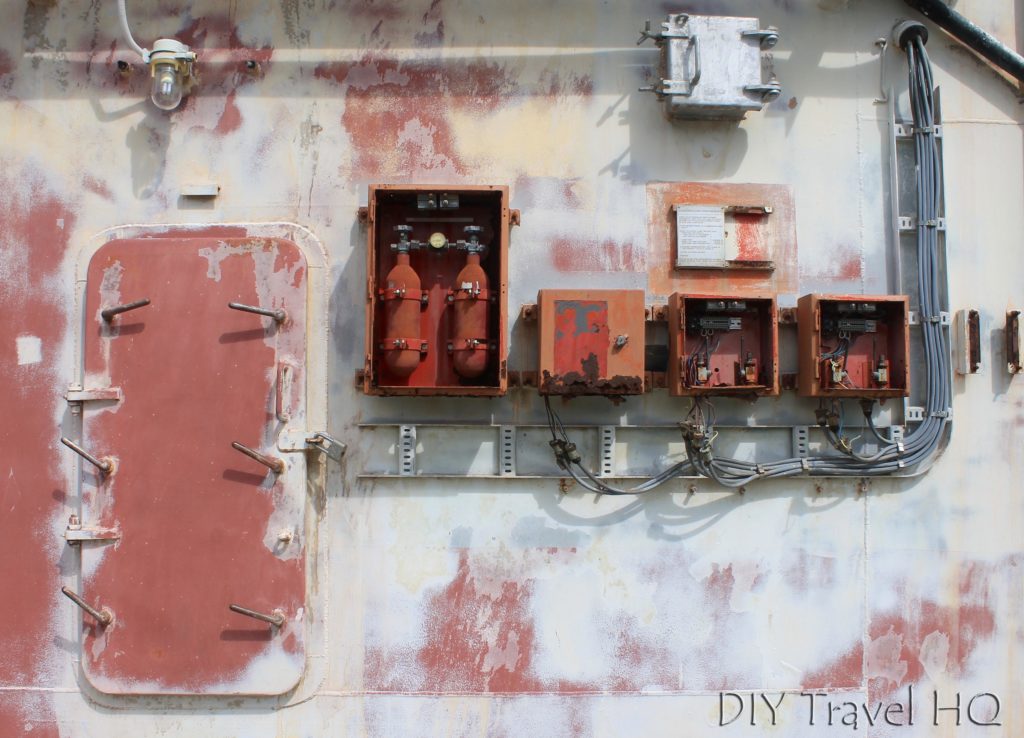 A large park in the city centre displays the Monument of Thanks to the World, a sculpture of a wave.

Surely, a tribute to one of the world’s greatest humanitarian efforts deserves much more. 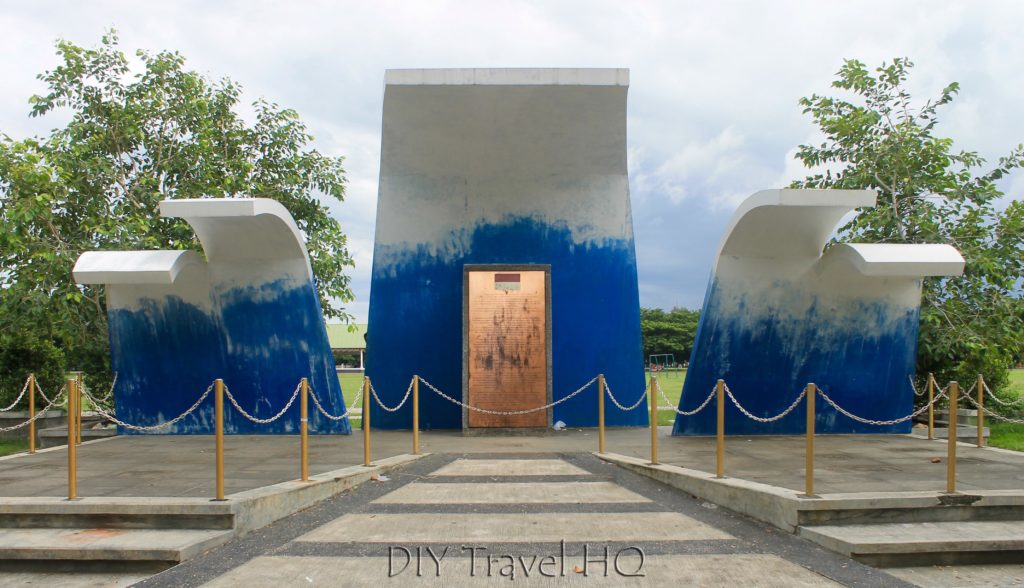 Monument of Thanks to the World

Around the park, 53 small pillars mark each individual country that contributed to the relief & reconstruction of Banda Aceh.

There are several other monuments in the park, including the Indonesian Airline Monument & Plane.

Monument of Thanks to the World entrance fee: Free 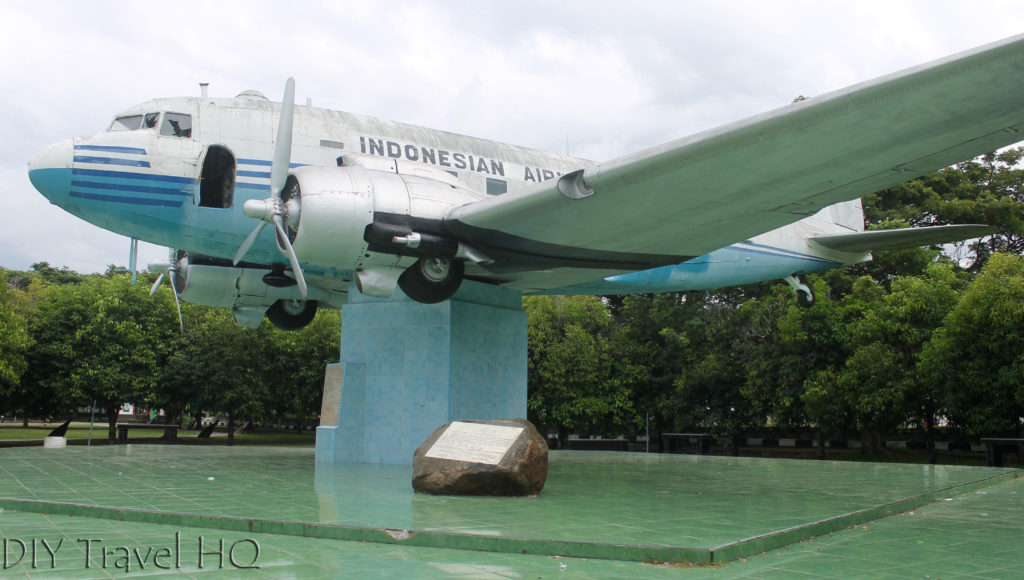 Mesjid Raya Baiturrahman was built around the 13th-15th century, burnt down in the Aceh War & rebuilt again in 1875.

The architecture is characterized for its 7 domes, 8 minarets, and 32 pillars. It can hold 9,000 people.

The mosque was one of few major structures, if not the only, that survived the tsunami, a sign taken by many Muslim locals as direct intervention from the divine.

When we visited, there were a lot of renovations going on & not much to see. 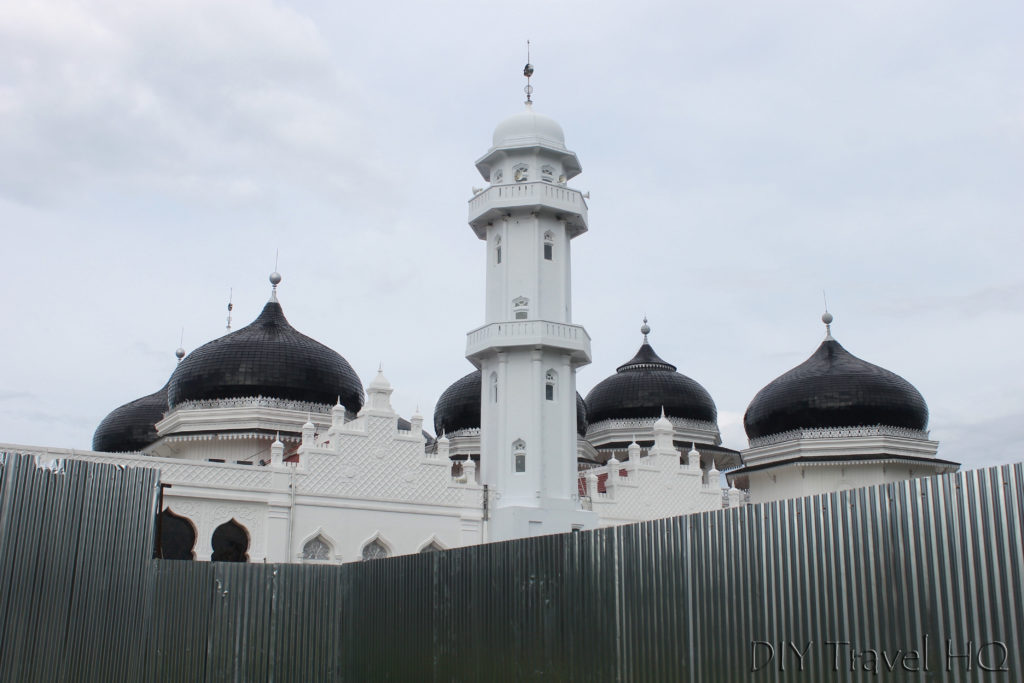 Baiturrahman Grand Mosque – view from the outside

Lives were saved when this fishing boat was thrown by a wave from a nearby port & became wedged into the top of a house.

59 people were able to make their way to onboard.

They were on safer, higher ground but could do nothing more than watch helplessly as the tsunami engulfed their homes & neighbourhood. 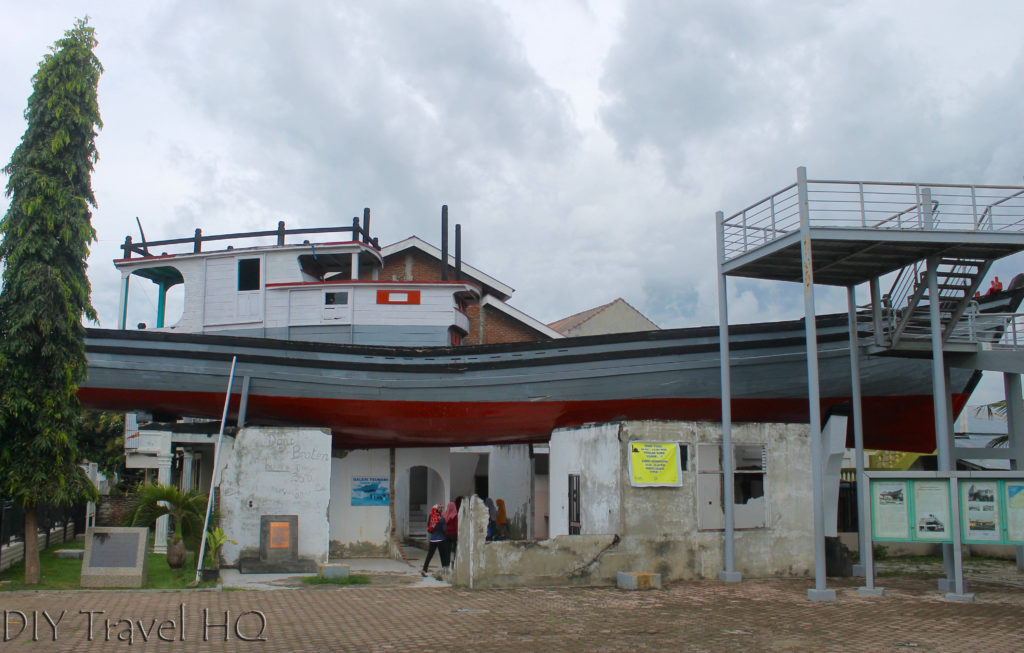 The Fisherman’s Boat on Top of a House remains untouched, and marks a fitting end to a self-guided Banda Aceh Tsunami Tour.

We travelled to the Fisherman’s Boat by becak for a quick stop before heading to the bus station.

Fisherman’s Boat on Top of a House entrance fee: Free 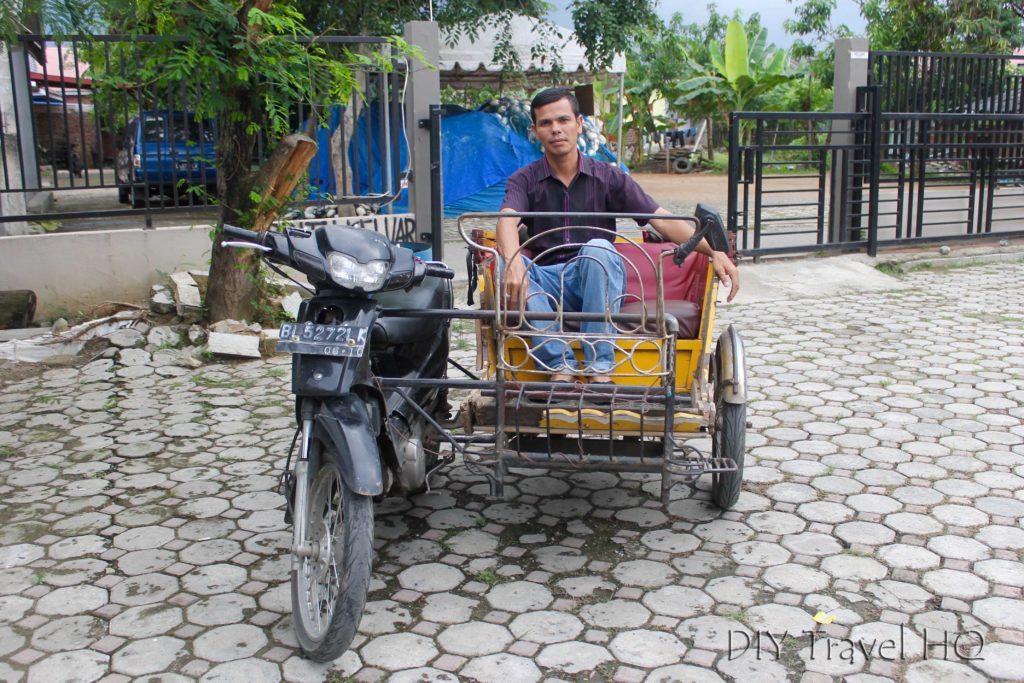 Travel by becak to the FIsherman’s Boat & around Banda Aceh

How to Get to Banda Aceh

From Pulau Weh, return to Banda Aceh by ferry:

How to Get Out of Banda Aceh

There are more economical options during the day.

How do you feel about Tsunami Tourism?