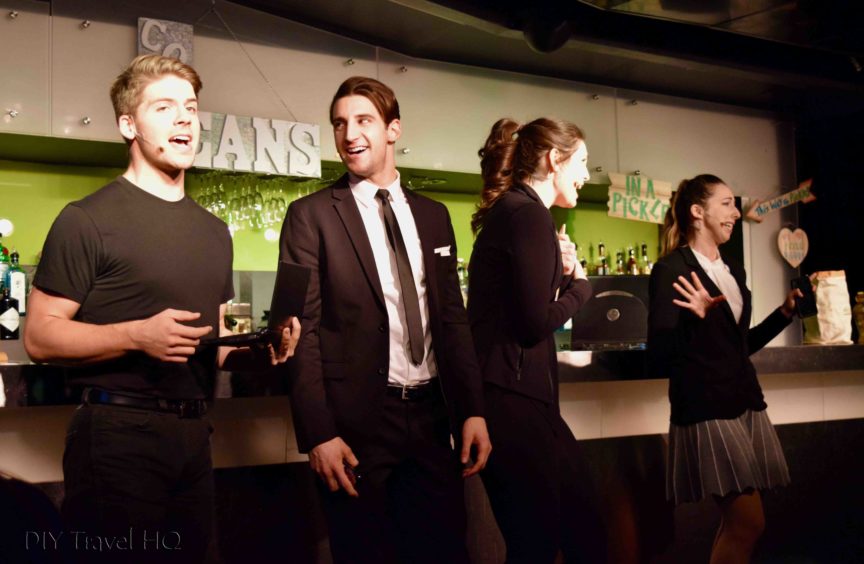 Enjoy brunch with a twist at The Imbible: Day Drinking musical in New York City – find out why mixing music & comedy with history & science is a matinee hit!

Venue of The Imbible: Day Drinking

The Imbible: Day Drinking is performed at New World Stages, in the heart of the theatre district in NYC. It’s currently also home to Avenue Q & The Gazillion Bubble Show.

The show is set in a bar – in a bar! The cast really make use of the whole space, performing behind, in front & on the bar itself!

In contrast to the bigger shows on Broadway, we here at DIY Travel HQ loved being in such an intimate venue. There are tables & chairs on the floors and booth seating around the walls.

The setting is ripe for improv & banter with the audience, which we’re sure will develop with time (we saw one of the 1st performances). 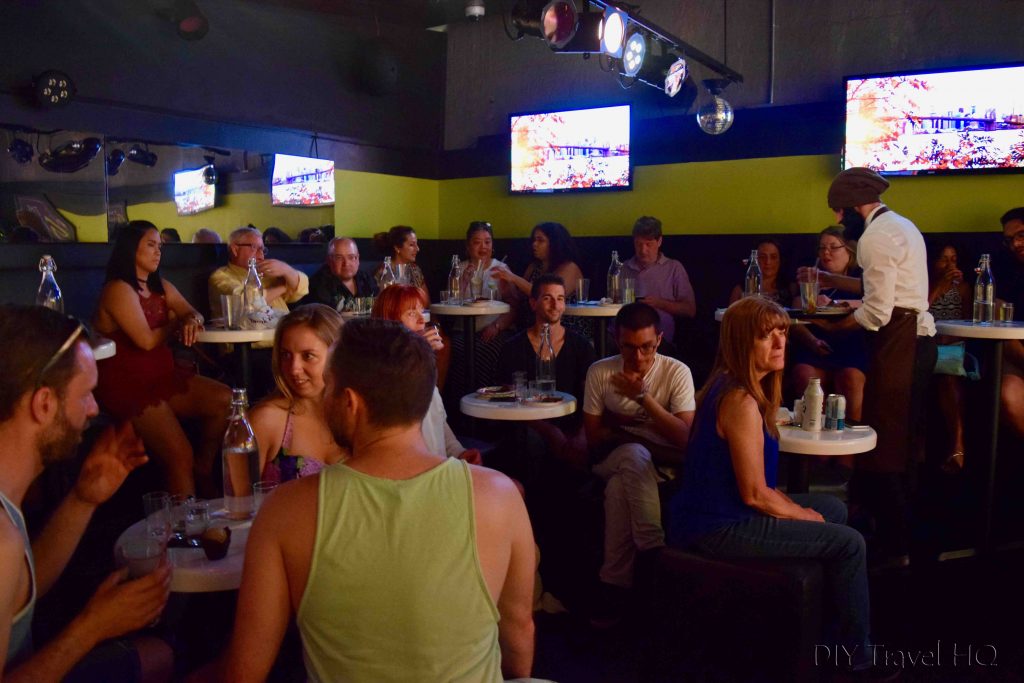 The intimate setting means there’s no bad seat at The Imbible: Day Drinking!

The Imbible: Day Drinking is a very New York City story, about 4 over-scheduled friends struggling to make time for brunch. But along the way, they come to appreciate the value of spending time with friends over food & drink.

It’s an acapella production, with off-beat, old-school, multi-part harmonies. It wasn’t what we were expecting or accustomed to but it grew on us endearingly.

The harmonies are backed up by plenty of song & dance, as the history & science behind some of the world’s most iconic drinks is revealed.

It’s a step back into many eras in time, with the 4-person cast playing multiple roles & characters throughout history. There are many wigs, costume & set changes that are a lot of fun!

What really sets the show apart from the crowd is the inclusion of brunch & cocktails as part of the show – you won’t be able to find this anywhere else on or off-Broadway!

So let now us take you through the The Imbible: Day Drinking experience through 3 drinks & a brunch 🙂 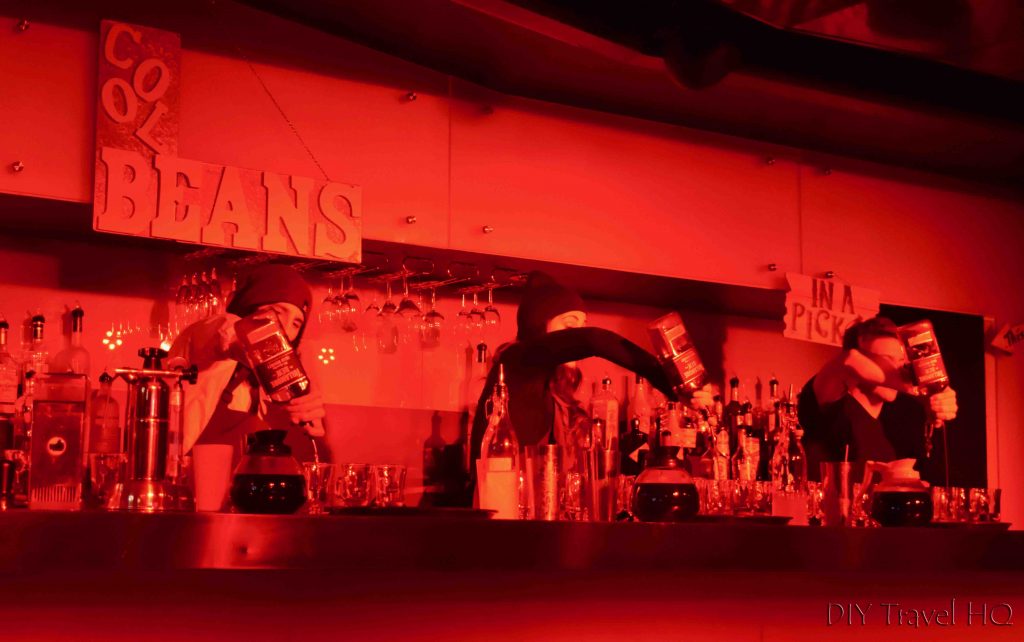 Alcohol & history is a great mix at The Imbible: Day Drinking!

At The Imbible: Day Drinking, the action begins as soon as you walk in the door. A waiter leads you to your table, before you should immediately make your way over to the bar – the 1st of your 3 complimentary drinks is a Bloody Mary.

Based on what we were overhearing at the bar, this is the kind of drink you either love or hate. Neither of us are fans ourselves but we never turn down a free drink – especially one that you can customize yourself!

There was a choice of not only vodka but whiskey & tequila. A whiskey Bloody Mary? A tequila Bloody Mary? Never heard of such a thing! However we have had a Corn Dog Bloody Mary at Big Daddy’s Grill in Boquete, Panama but that’s on a whole other level…

Back to The Imbible: Day Drinking, next we had a range of tomato juices to choose from. Then came a selection of condiments: salt, pepper, Worcestershire sauce, tabsco sauce, horseradish, lemon…

Even if we still don’t like Bloody Mary’s, making one was a lot of fun & we’re each getting closer to finding one that suits our taste buds! 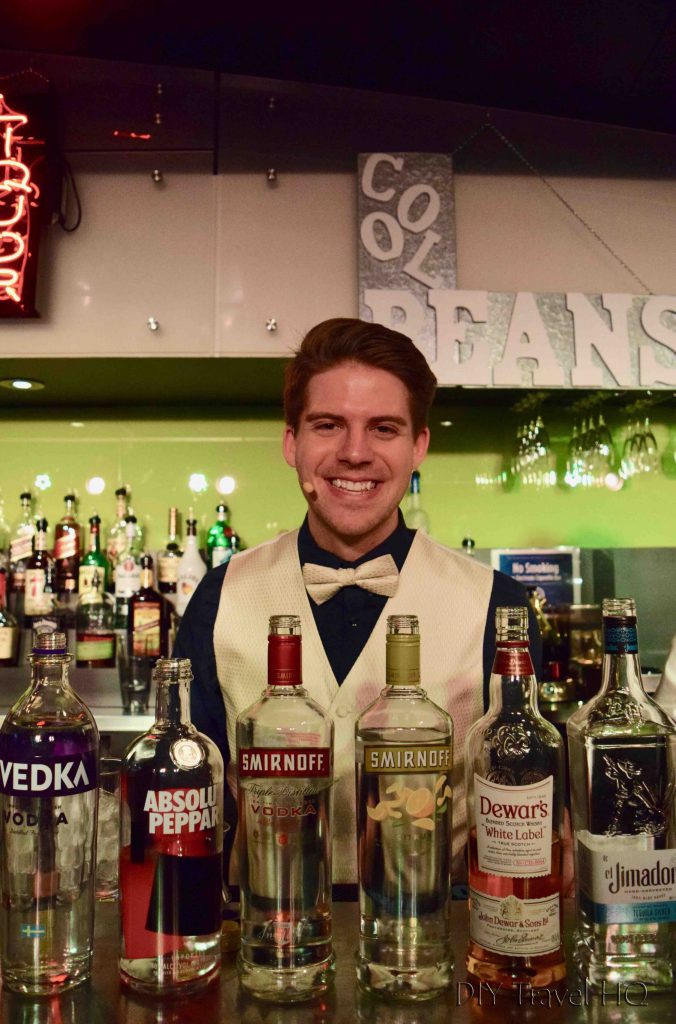 Vodka, whiskey or tequila – what would you like in your Bloody Mary?!

Brunch at The Imbible: Day Drinking

You can’t have a Bloody Mary without brunch, especially at The Imbible: Day Drinking! We helped ourselves to some cheese, dips, veggie sticks, pickles, cookies & muffins before returning to our seats.

So what’s in a brunch? Of course, we all know it’s a mix of breakfast & lunch – in name & reality. But did you know that this very popular American tradition actually originated in England? 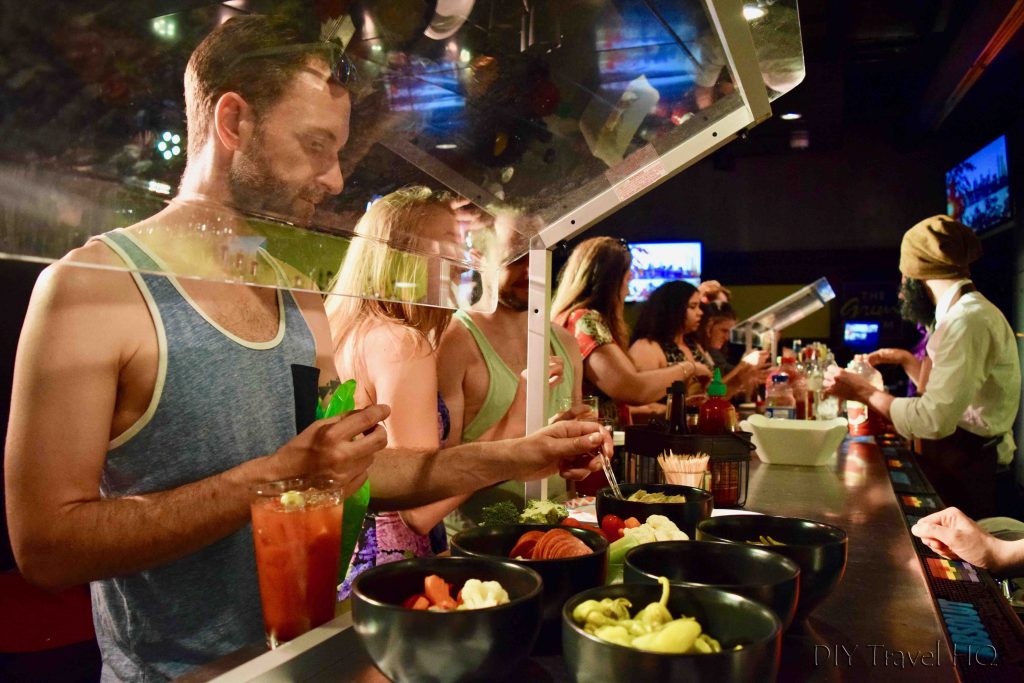 Help yourself to the brunch bar before the show!

The Imbible: Day Drinking takes us back to the late 19th century, where hunting was a popular pastime in upper-class British society.

In between sessions stalking deer & shooting birds on weekends, both men & women would sit down to a table of meats, eggs, cheese & fancy drinks. This was considerably lighter fare than the traditional Sunday roast lunch at the time – and it was served earlier, sometime between breakfast & lunch.

In 1895, Guy Beringer wrote about it for the 1st time in his article “Brunch: A Plea” in Hunter’s Weekly:

”Brunch is cheerful, sociable and inciting. It is talk-compelling. It puts you in a good temper, it makes you satisfied with yourself and your fellow beings, it sweeps away the worries and cobwebs of the week.”

120 years later & The Imbible: Day Drinking shows us that the essence of brunch remains the same. 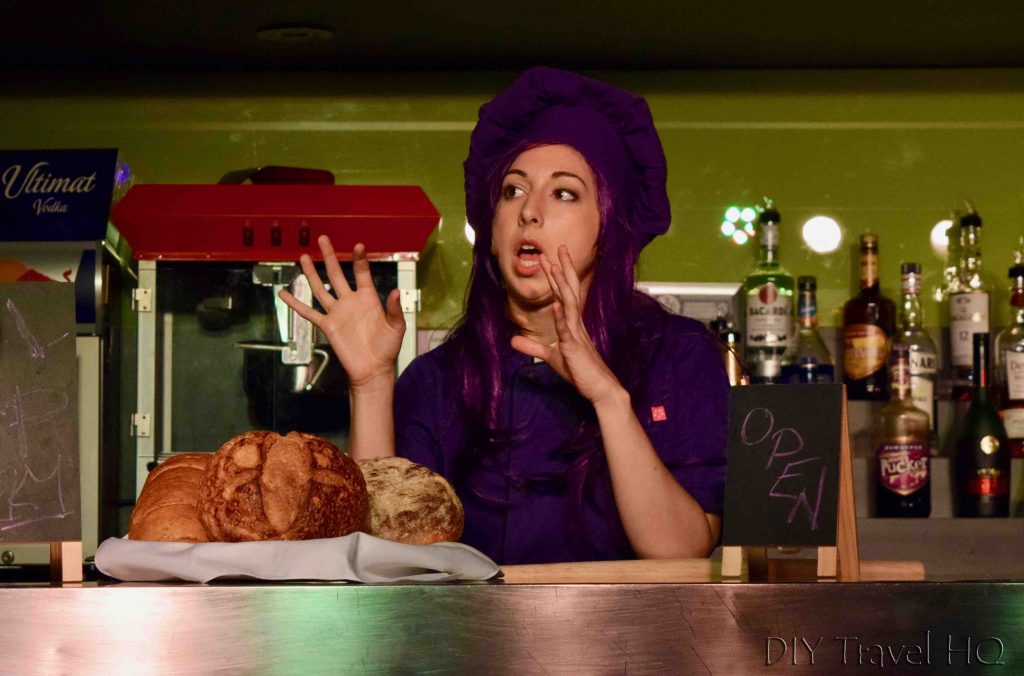 The next star of The Imbible: Day Drinking show was Irish Coffee.

Irish Coffee is made of hot coffee, Irish whiskey & sugar or syrup, topped with thick cream. There are TV screens which are part of the show, & they show the recipes for the drinks. 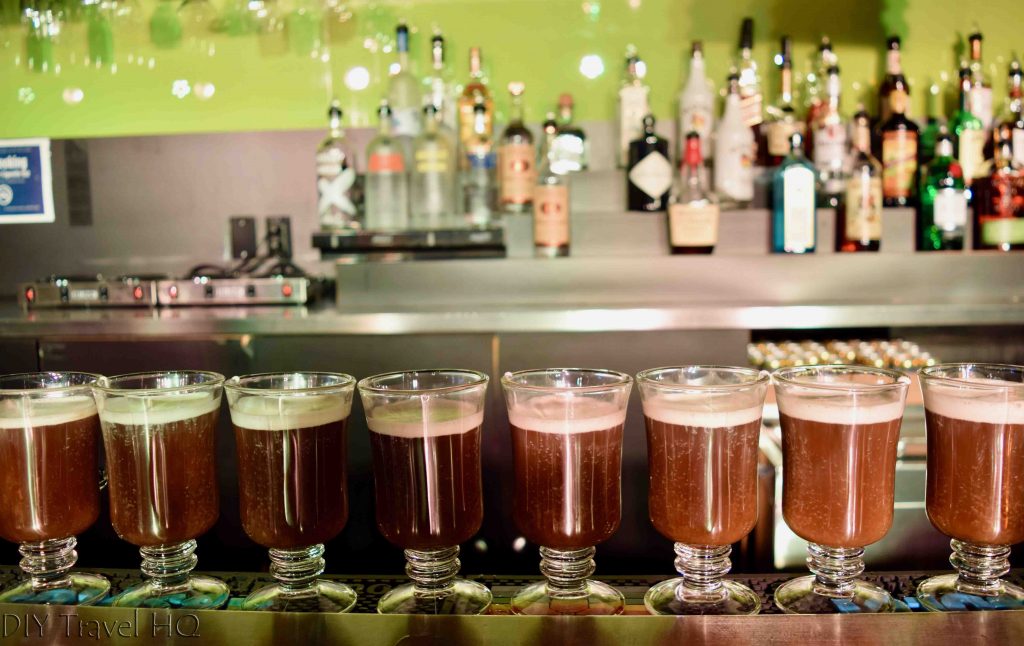 Irish Coffees are on the house at The Imbible: Day Drinking!

After an evening landing on 1 particular flight in the 1940’s, a local chef offered the American passengers coffee with whiskey, to warm them up.

One of those served was Stanton Delaplane, a well-known travel writer. He was impressed & took the recipe back with him to San Francisco. Here, he worked with the Buena Vista Café in serving Irish Coffee & perfecting the Irish method for floating the cream on top of the coffee. Even San Francisco’s dairy-owner mayor got involved!

Some of the skits in The Imbible: Day Drinking are a little cheesy, but in a good way. The cast are all very talented & pull the most amusing faces, which you can’t help but smile at 🙂 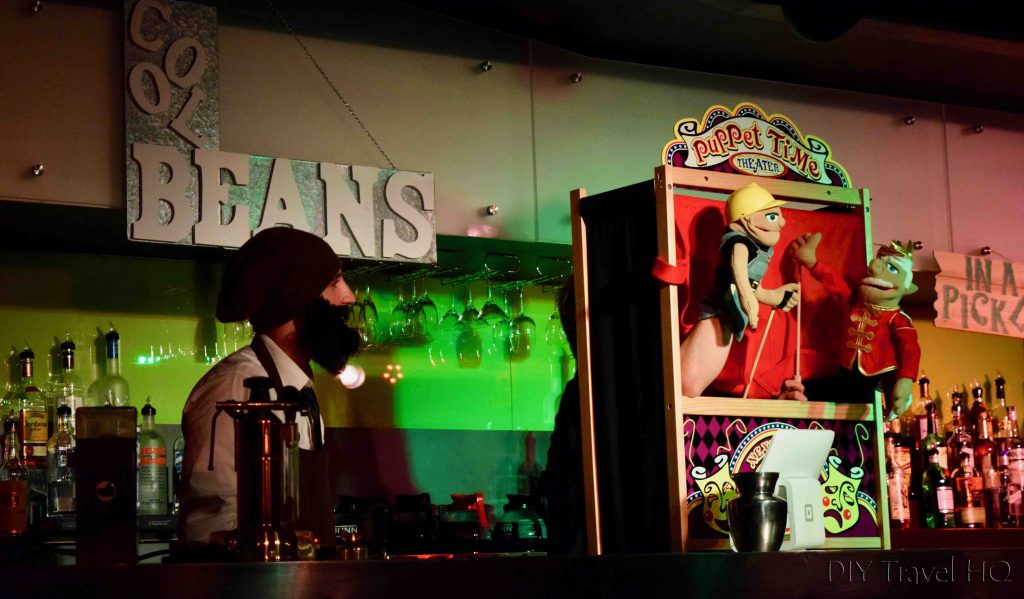 The puppet skit in The Imbible: Day Drinking was hilarious!

Bellini at The Imbible: Day Drinking

At The Imbible: Day Drinking we learnt that a Bellini cocktail is a mix of Prosecco & peach puree, nectar or whatever fruit is in season.

Prosecco itself is sparkling wine made in Italy, similar to Champagne in France in that it can only be produced in the Prosecco region.

We won’t give it all away, but the sparkling wine production process is really interesting as were the changes in the fermentation methods over the years.

We’d never had a Bellini before so it was awesome to have one served to us at the table, just after learning all about it! 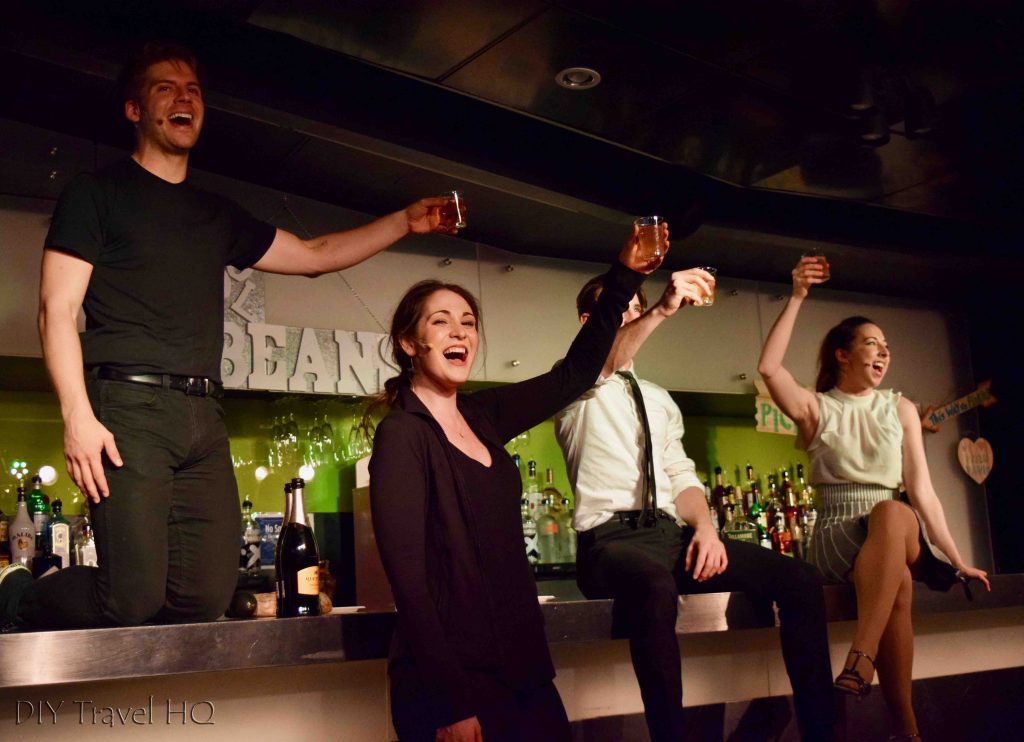 Cheers to the talented cast of The Imbible: Day Drinking!

We really enjoyed this unique acapella production with complimentary drinks & brunch – check out The Imbible: Day Drinking & you will come away entertained, imbribed & informed! ***

Have you ever been to a musical with brunch & drinks?!

* We received a complimentary tickets to The Imbible, thank you to the cast & crew for having us. We only recommend fun, value for money activities & experiences that we believe our readers would enjoy. As always, all opinions & photographs are our own.