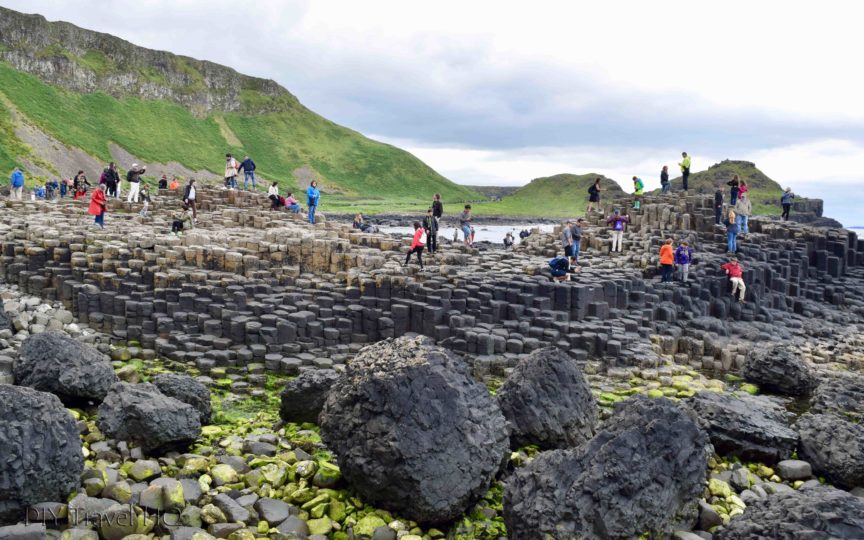 The Giant’s Causeway is a natural wonder full of myth & legend – with stops at the Dark Hedges, Carrick-a-Rede rope bridge and Dunluce Castle, find out why you should visit with Paddywagon Tours!

The Giant’s Causeway was at the top of my Irish bucket list and I’m really happy I got to tick it off with Paddywagon Tours.

As you know, we here at DIY Travel HQ are all about independent travel but in Ireland it’s often cheaper & more convenient to take a tour than rely on public transport.

And with Paddywagon Tours, we got a few other bonus stops included, as well as informative and entertaining commentary from our driver-guide.

Here’s the lowdown on the Giant’s Causeway Day Tour from Belfast!

* Don’t forget to purchase travel insurance before any trip to Ireland. We’ve been using World Nomads for over 10 years – it’s the best-value provider we’ve found & we’ve also never had any issues on the few occasions we’ve had to make a claim. 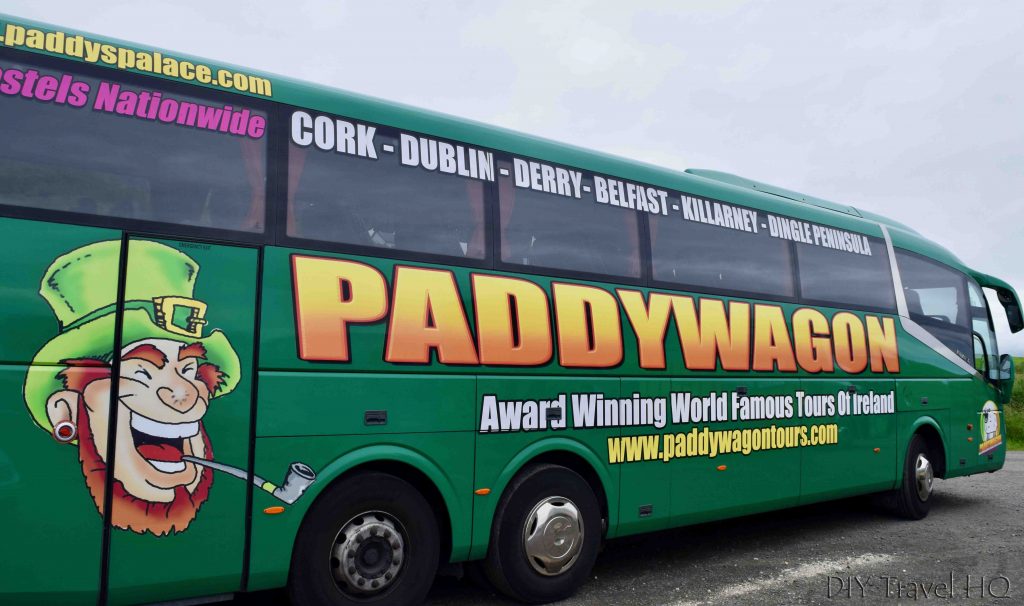 All aboard Paddywagon Tours!

The 1st stop of the day was at the Dark Hedges aka the Kings Road – one of many Game of Thrones filming locations you can visit on the Antrim Road coast.

This avenue of beech trees was planted by the Stuart family in the 18th century, as a grand entrance leading to their estate.

Over time, the branches have twisted & curved in every direction, forming a very cool, natural tunnel laneway.

We had a quick 15minute stop here to take some photos & admire the views. Don’t expect to have it to yourself as it’s one of the most popular spots in Northern Ireland! 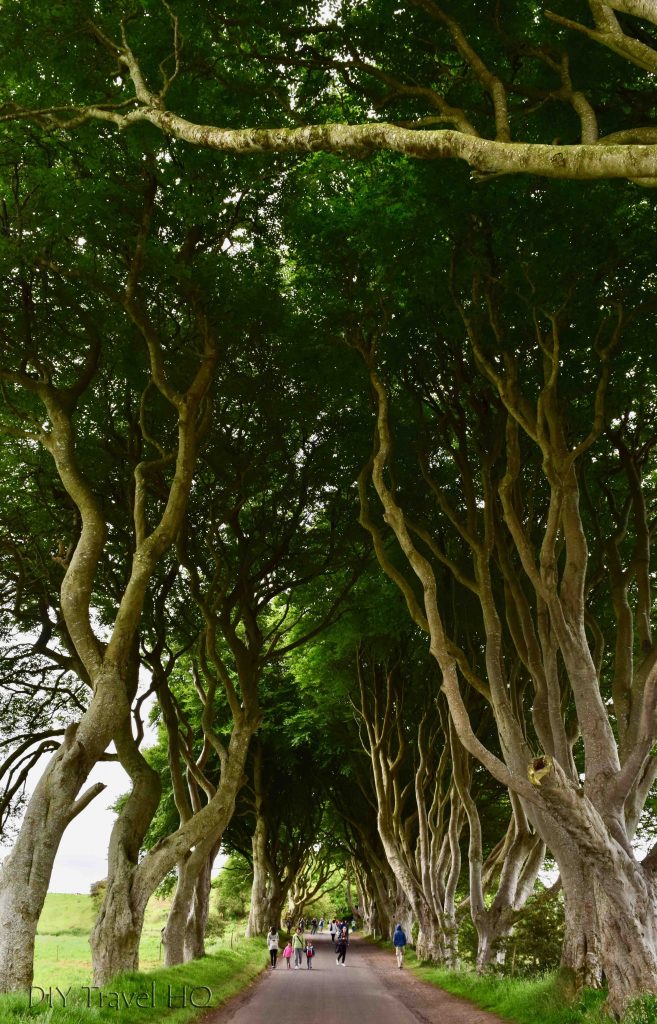 Take a walk & drive down the Dark Hedges with Paddywagon Tours

The Carrick-a-Rede rope bridge is a modern version of the type built by salmon fishermen here since the 17th century. At the tiny island just across the way, salmon was once abundant but stopped spawning long ago.

Paddywagon Tours offers the chance to cross the rope bridge for a discounted fee of £6 pounds (£7). For an extra £1 you can even buy a certificate saying you crossed the bridge! 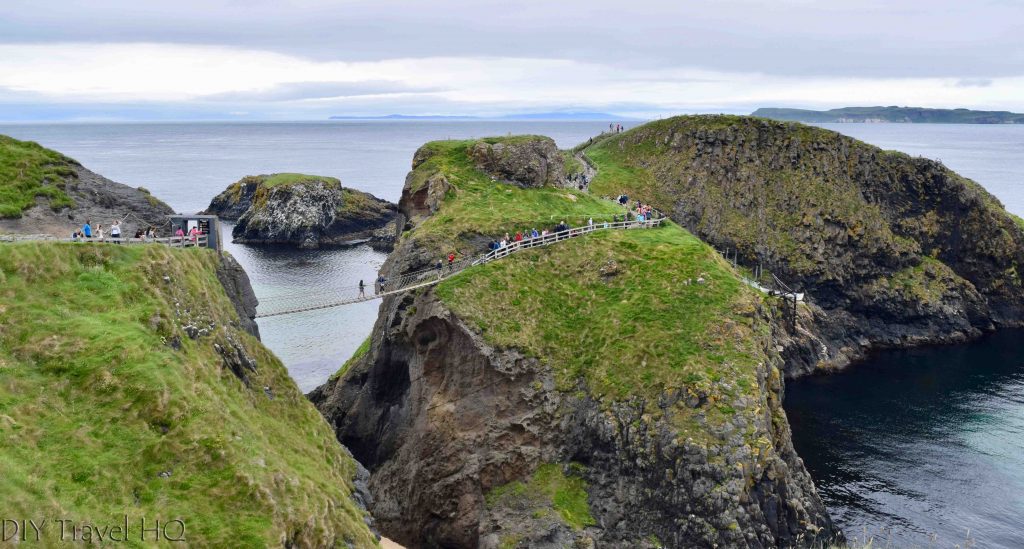 Cross the Carrick-a-Rede top bridge if you choose

Those prices were a bit steep for me but I had more than enough to keep me in awe! The 15 minute walk to the Carrick-a-Rede rope bridge was absolutely stunning, with incredible coastal views. It was probably my highlight of the day, even more so than the Giant’s Causeway.

The landscape was completely green with a rocky cliff face on one side leading down to a pebbly, white sand beach. The ocean was a lovely clear blue and even on an overcast day, it was breathtaking.

Once you reach the rope bridge, you can walk on a little further. We had a 1 hour stop here which was enough but I wish I had a little more time to explore. There’s also apparently a quarry that was used in Game of Thrones – you’ll find filming locations all over Northern Ireland! 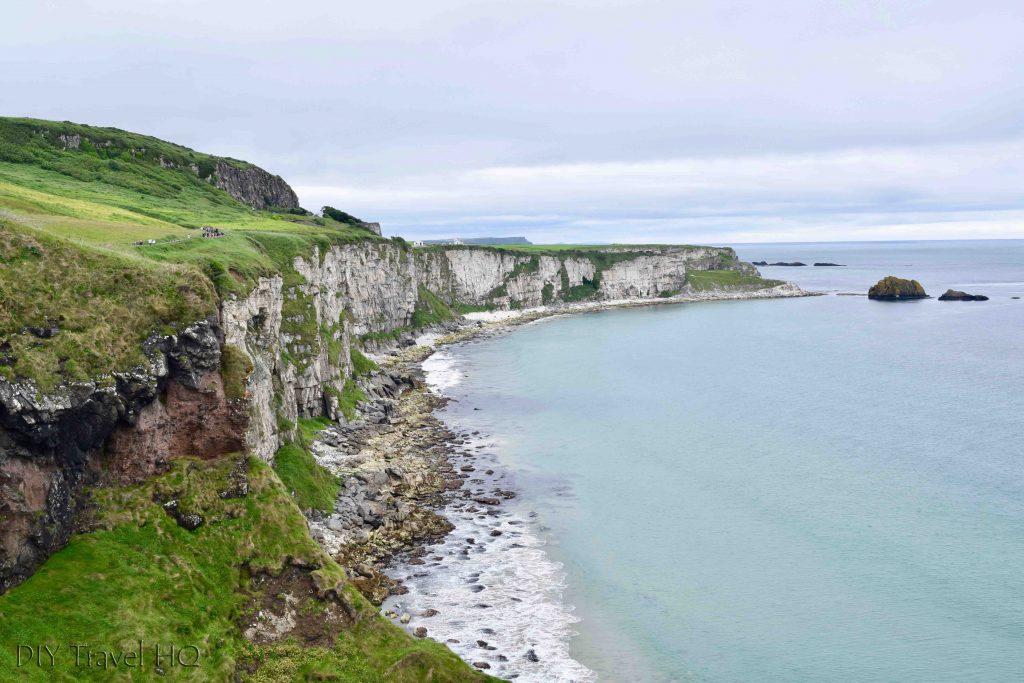 After a short drive from Carick-A-Rede rope bridge, we arrived at the Giant’s Causeway.

Paddywagon Tours includes a ticket to the Causeway Visitor Centre, worth £8.50. I had a quick look inside and while it was very big busy, I didn’t find it very interesting. There are toilets & places to eat which might be handy if you didn’t pack a lunch – the tour normally makes a stop at a local cafe but as most of the passengers weren’t interested, we were given more time here instead.

I picked up an audio guide, which I quickly regretted – I just wanted to be surrounded by the sights & sounds of nature!

The 15 minute walk to the Giant’s Causeway is along another beautiful coastal road. There’s a shuttle bus that runs back and forth that you can catch for £1 each way. 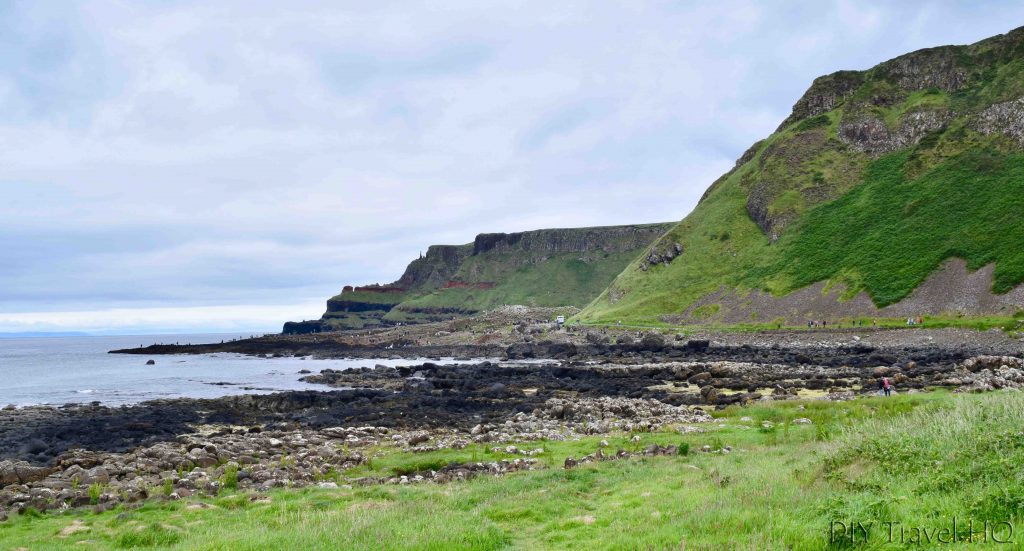 Another stunning coastal walk on the Causeway Coast

Before long, you start to see those famously shaped rocks popping up along the beach… then they’re everywhere, all 40,000 perfect hexagonal columns rising out of the sea!

The Giant’s Causeway is a UNESCO World Heritage Site, formed by an ancient volcanic eruption some 50-60 million years ago.

I prefer the legend that the rocks were a result of fights between the feuding giants Finn McCool from Northern Ireland & Angus from Scotland! They do look like huge stepping stones that would be an appropriate road for giants looking to cross the sea!

I had a ton of fun jumping around the rocks and taking photos. They can be captured from so many interesting perspectives and they really do seem to stretch on endlessly.

The Giant’s Causeway is a true natural wonder that lives up to the hype. 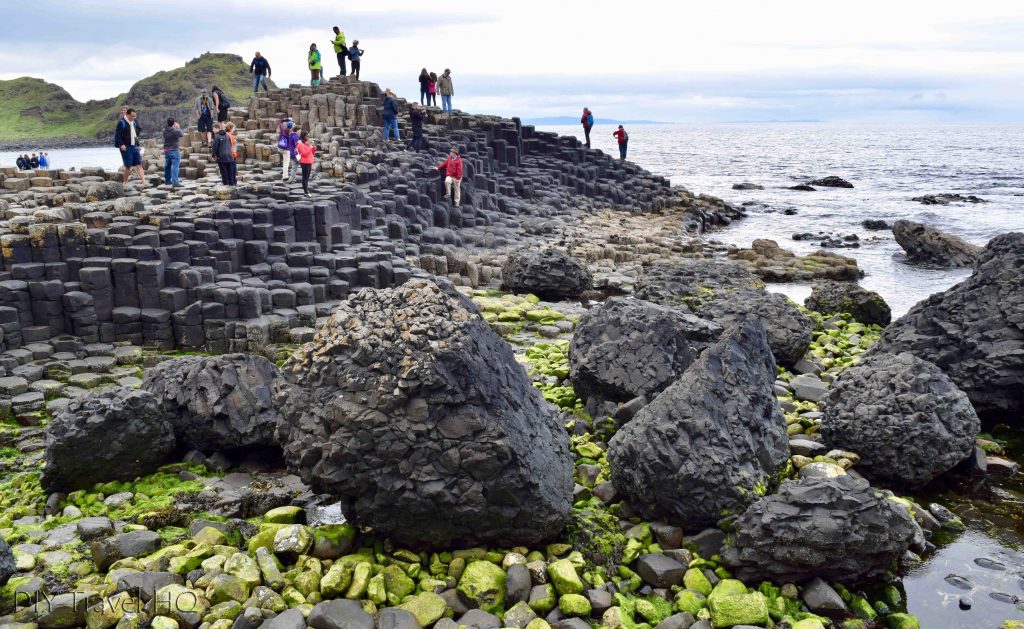 Walk in the footsteps of giants’ at the Giant’s Causeway

There was a family that was 20mins late getting back on the Paddywagon Tours bus at the Giant’s Causeway so we didn’t have enough time for our scheduled stop at Dunluce Castle.

We drove past it & it looked very atmospheric, a medieval castle in ruins on the edge of a cliff.

All in all, I would highly recommend the Giant’s Causeway Day Tour from Belfast with Paddywagon Tours. The bus takes you around to 4 sites, with commentary from the driver along the way – the stops give you enough time and freedom to explore them on your own terms! 🙂 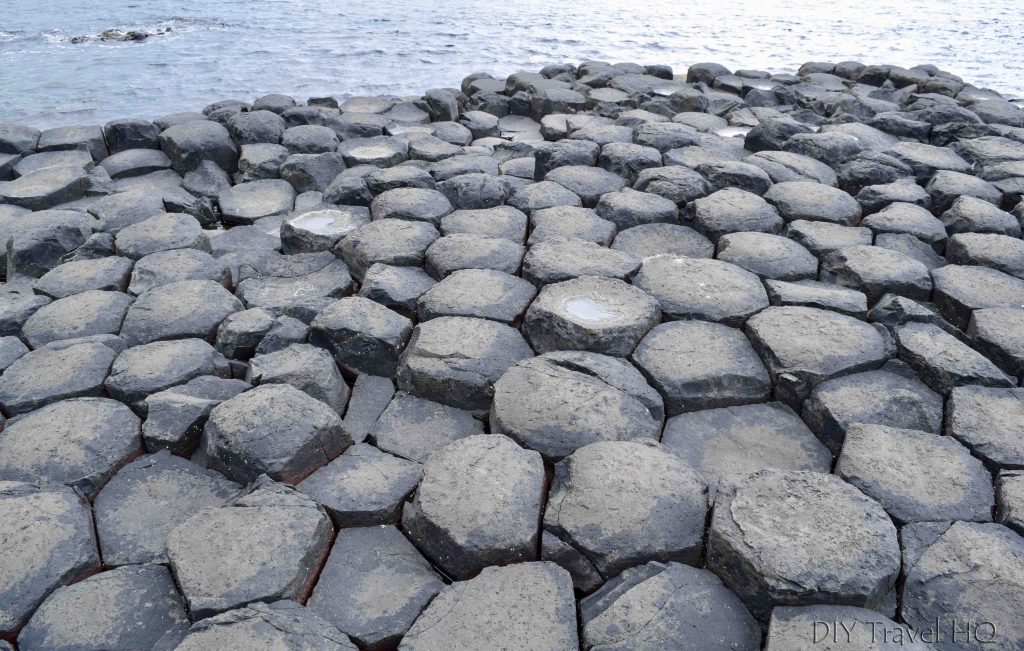 A few of the 40,000 hexagonal basalt columns at the Giant’s Causeway!

Schedule: Departs daily at 10:00am

*** The Final Word: Visiting the Giant’s Causeway with Paddywagon Tours is fun, convenient & value for money! ***

Have you visited the Giant’s Causeway?

* Thank you to Paddywagon Tours for hosting me. We only recommend fun, value for money activities & experiences that we believe our readers would enjoy. As always, all opinions & photographs are our own.