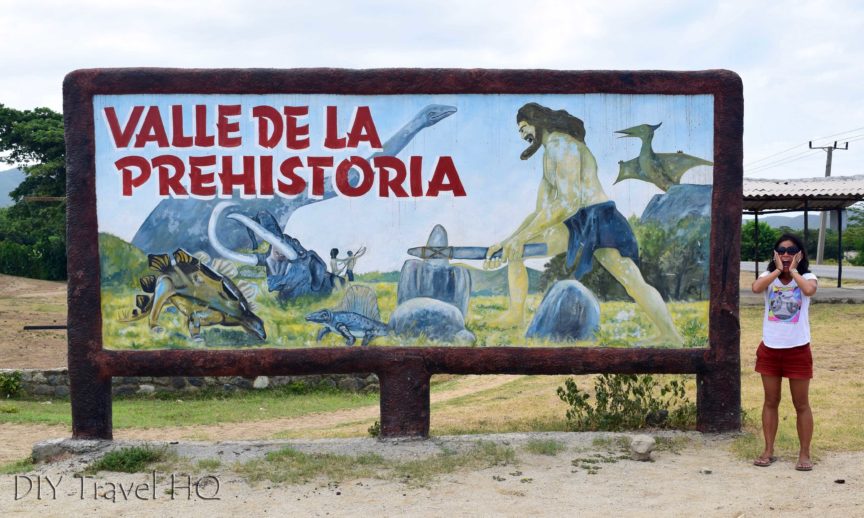 What do you get if you cross The Flintstones with Jurassic Park? Cavemen alongside dinosaurs at Valle de la Prehistoria! Only in Cuba! Join us in Parque Baconao for a ton of fun & laughter!

For some reason, the Cuban government instructed inmates at a nearby prison to build a concrete dinosaur park! Thus, Valle de la Prehistoria was created, 25kms from Santiago de Cuba – it opened its gates to the public in 1980.

I wish we here at DIY Travel HQ knew more about the who, what & why of this but like many things in Cuba, the truth is cloaked in mystery & rumour.

* Don’t forget to purchase travel insurance before any trip to Cuba. We’ve been using World Nomads for over 10 years – it’s the best-value provider we’ve found & we’ve also never had any issues on the few occasions we’ve had to make a claim. 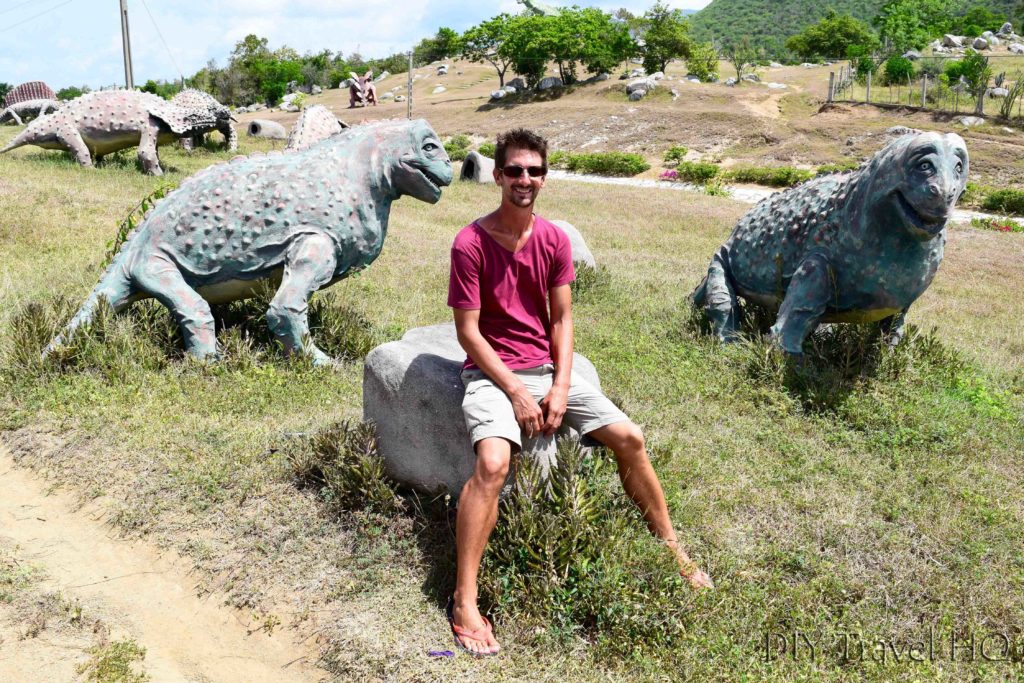 The first dinosaurs we saw & sat on!

It’s pretty easy to get here by public transport – if you’ve never travelled this way before in Cuba, just take a deep breath & take the leap! See further below for a step-by-step guide – and be sure to check out our Cuban budget travel guide for more information on travelling in Cuba

As you approach, the park will be on your left – you can’t miss it! The Flintstones, eat your heart out! Start getting excited, this sets the tone for what’s to come!

Another woman will lower the vehicle rope for you to cross over – as you can see from the picture above, clearly you can just walk around it… but in Cuba, you don’t mess with authority!

Walk along the straight road for about 5 minutes – you’ll see cows & horses grazing the fields on both sides. 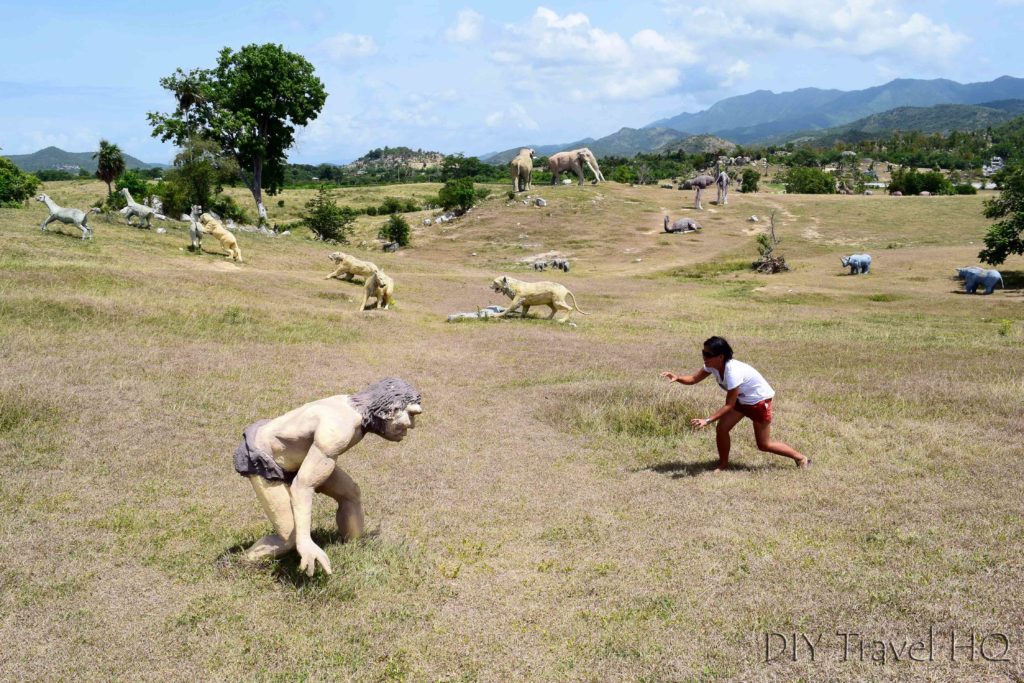 Facing off against a concrete caveman is still thrilling!

You’re suppose to pay a CUC$1 camera fee, where exactly, who knows?! We saw a couple of small orange-topped marque booths, so avoid going near those if you don’t want to pay.

No-one seems to care anyway & it’s a big park, plenty of places you could hide in if they really wanted to chase you down!

Start with the park on the right side, roaming with dinosaurs, mammals & cavemen. There’s also a Flintstones-style café here with toilets. 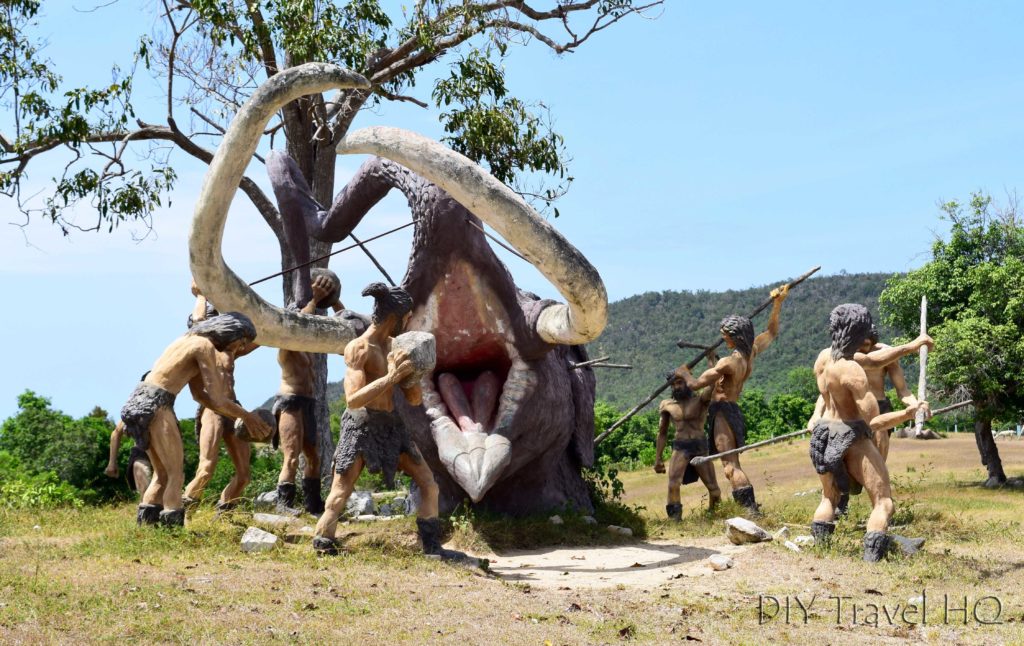 There’s no chronological order, heck with dinosaurs standing alongside homosapiens, it’s not important that they existed separately some 57 million years apart….

Some of our favourites include cavemen spearing a wooly mammoth, cavemen burying one of their own & cavemen being attacked by a bear.

I don’t think cavemen & mammoths lived in the same era but who cares?! Extra points for creativity! 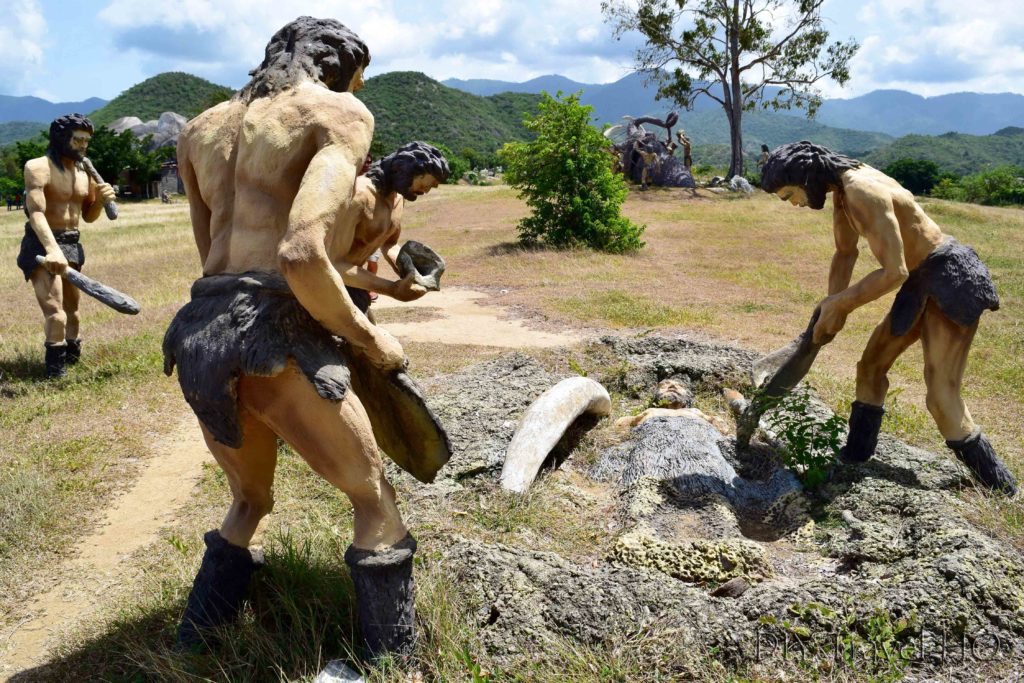 Cavemen burying one of their own 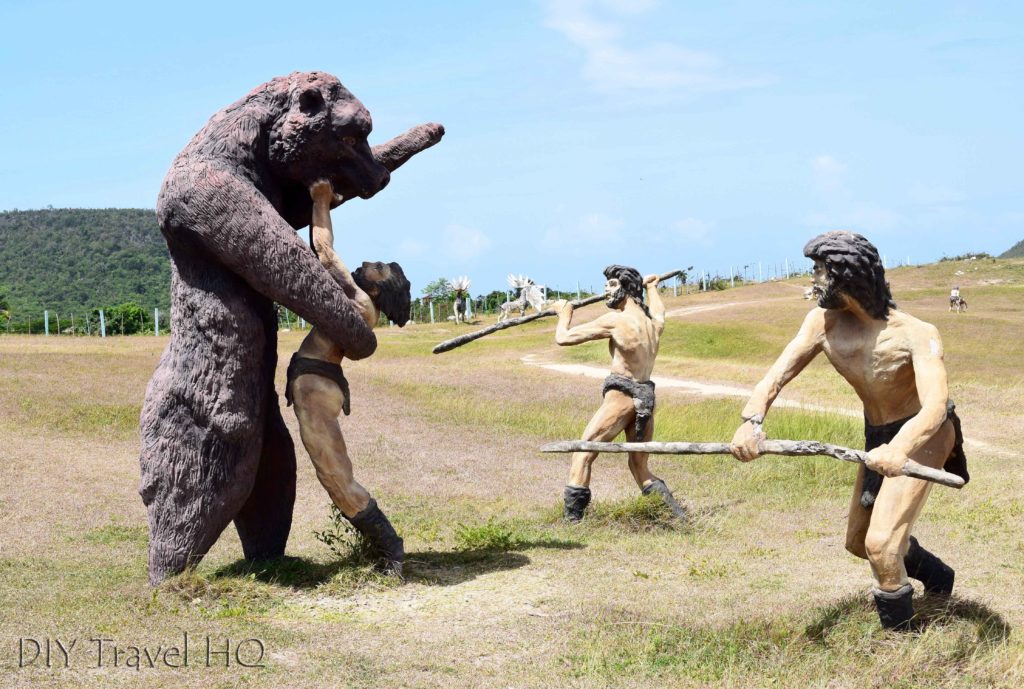 Cavemen being attacked by a bear!

The Jurassic Period has been brought to life – all the sculptures are life-size in scale but larger than life in spirit!

It’s a huge open valley, a few acres of tropical vegetation with palm trees & rolling hills in the background. 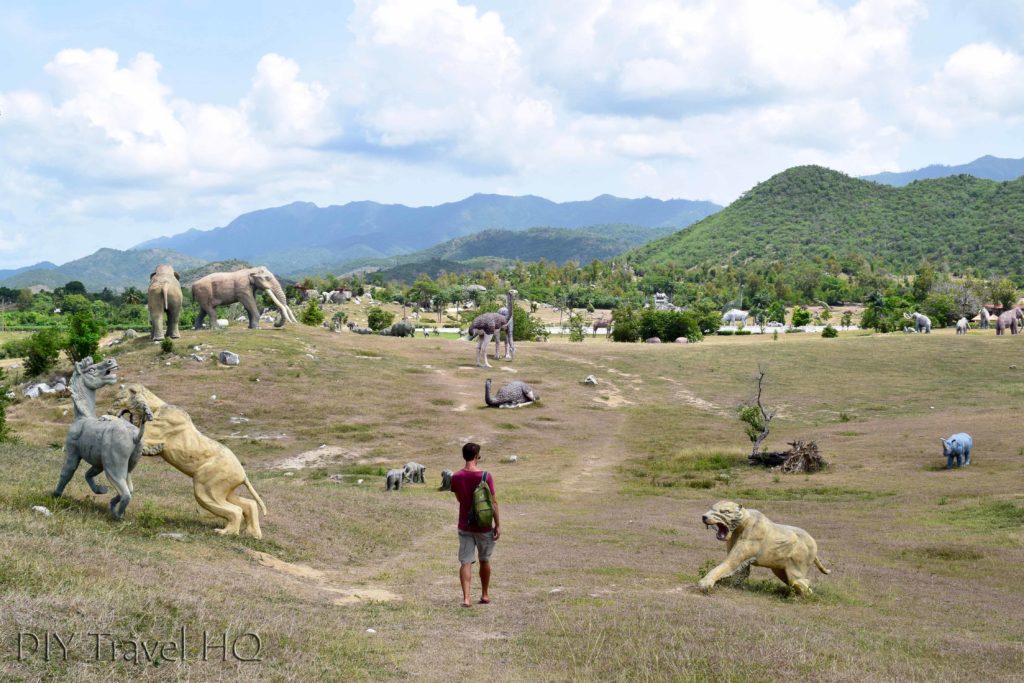 The park is pretty big, across a few acres

After the cavemen-brutality section, move on through the park to find more familiar species: lions, horses, rhinos & elephants. 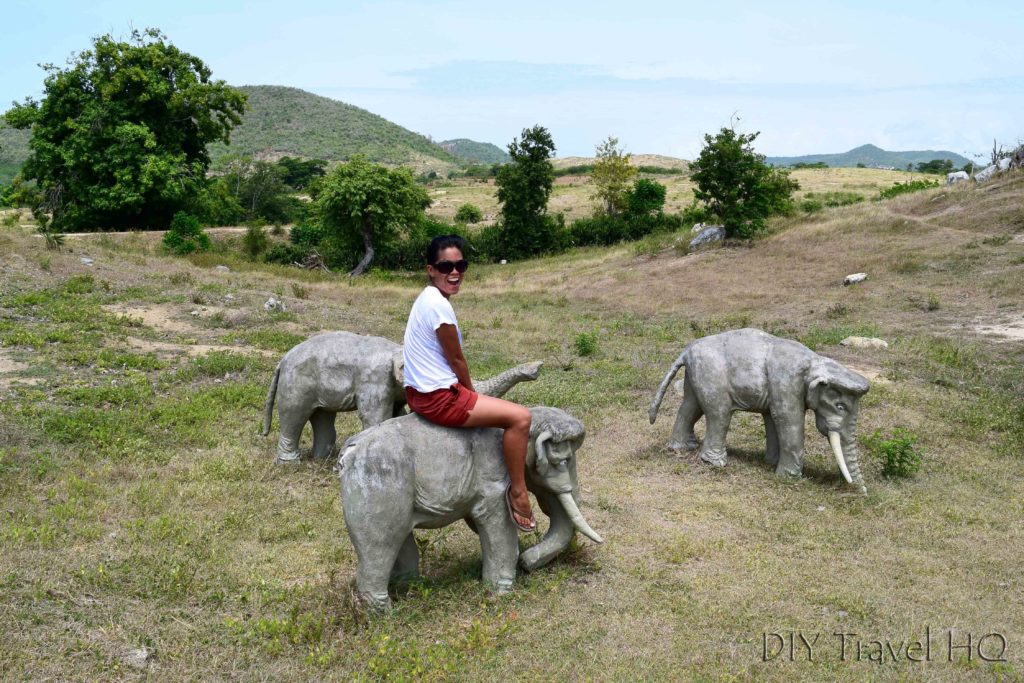 Don’t worry, there are still plenty of prehistoric birds & Neanderthals around. 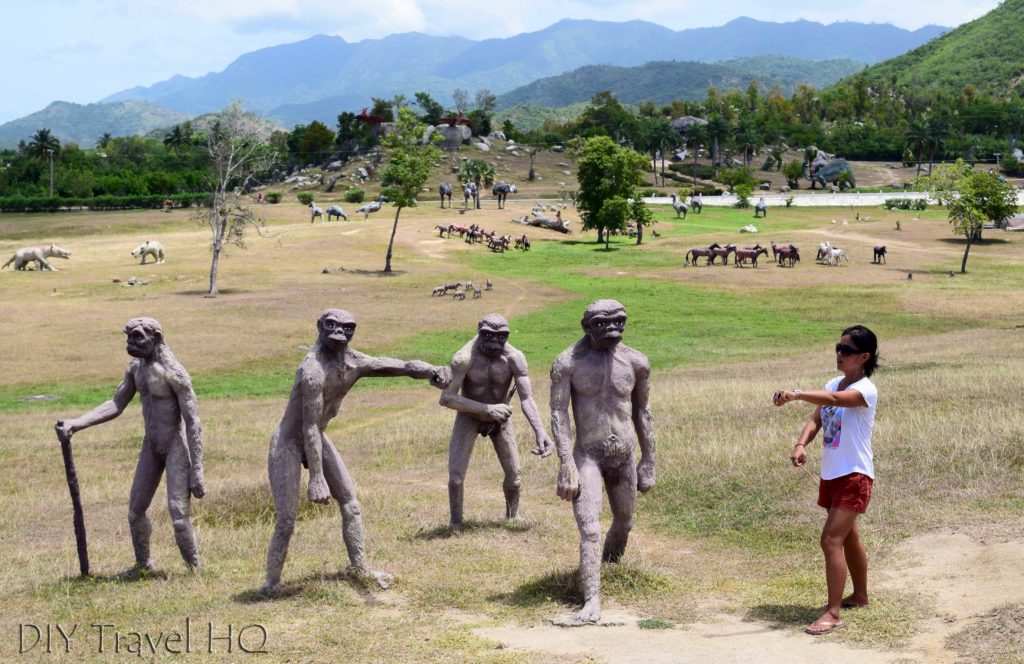 Is this where we came from?! That’s scary! Artistic licence!

Tell me, where else on earth have you seen anything like this in your life?!

Again, the what, why, who & WTF come into my mind – how did this place happen?! But there are no answers here, just go with it!

Don’t forget to document everything with as many photos & poses as possible.

This isn’t a museum – interact with the sculptures, pose, climb on them… we had a blast! 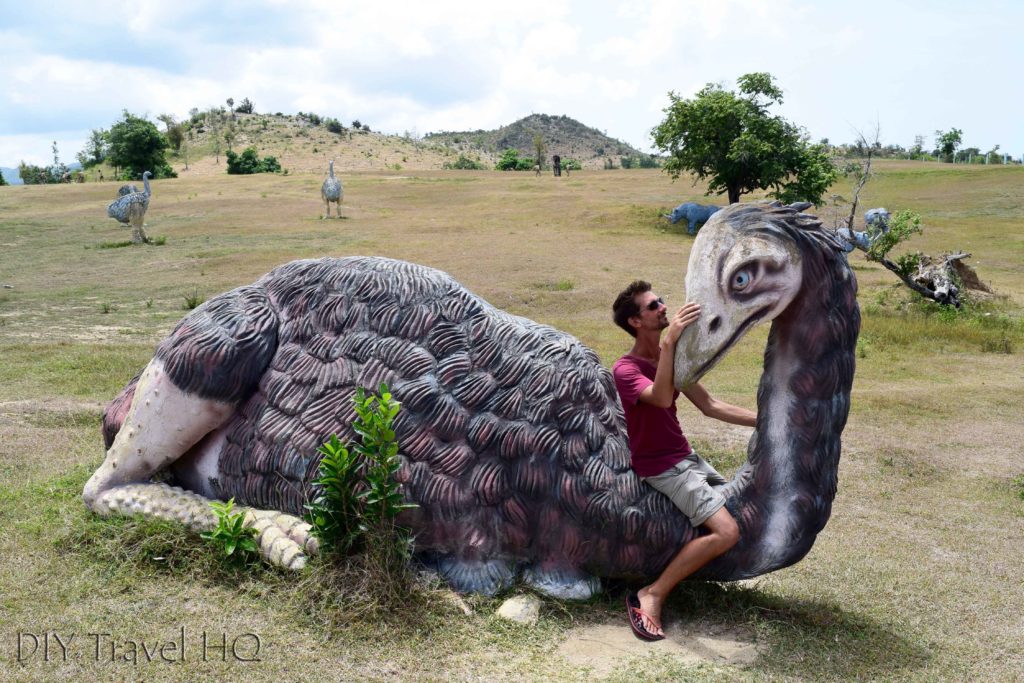 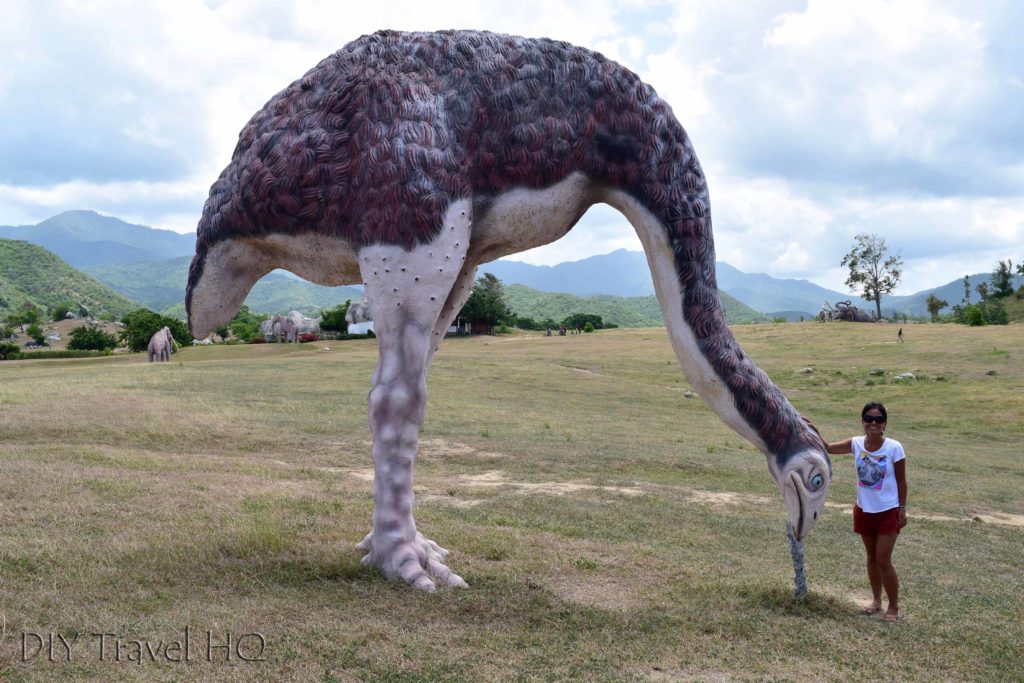 I love it here! So much fun!

After you’ve done your rounds, it’s time to cross the road & see what lies on the other side.

We hope you said goodbye to your favourite animals & homo sapiens because here, there are only dinosaurs. 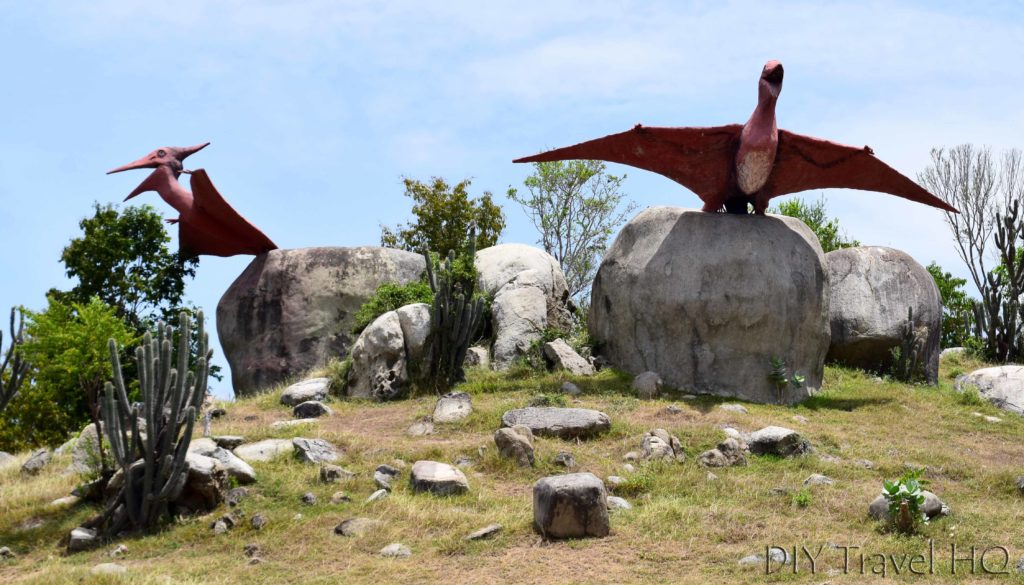 Pterodactyls about to take-off!

Pterodactlys are about to launch from boulders and dinosaurs are fighting & drawing blood. 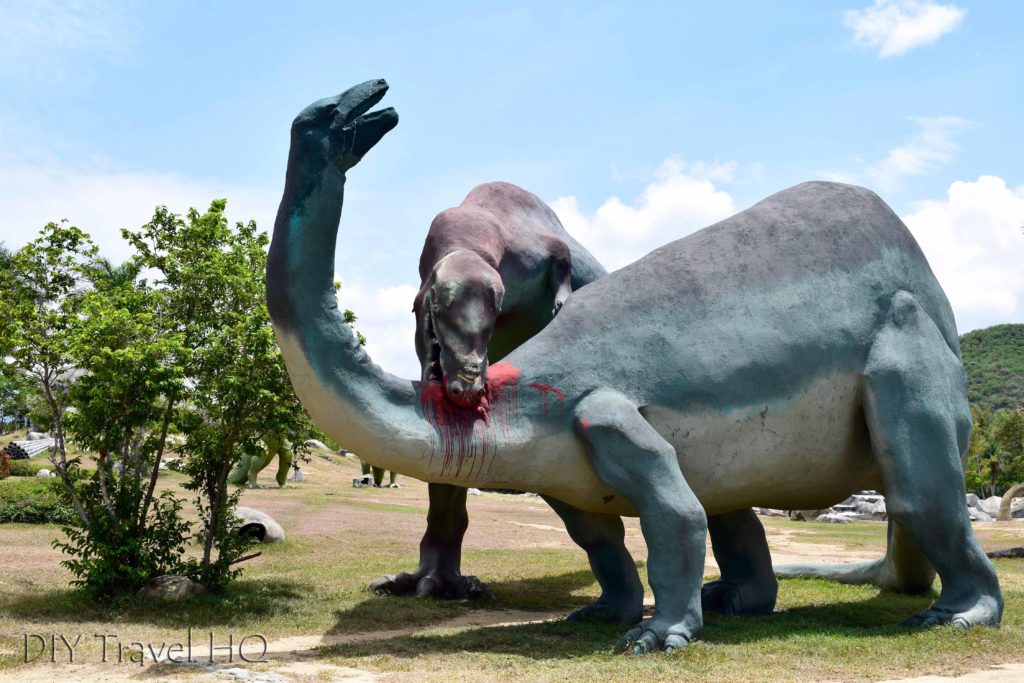 The brontosaurus steal the show though, poking their long necks out of a large grassy pool – resources were limited ok, remember Valle de la Prehistoria was created during a time of Special Period austerity, don’t judge too harshly! 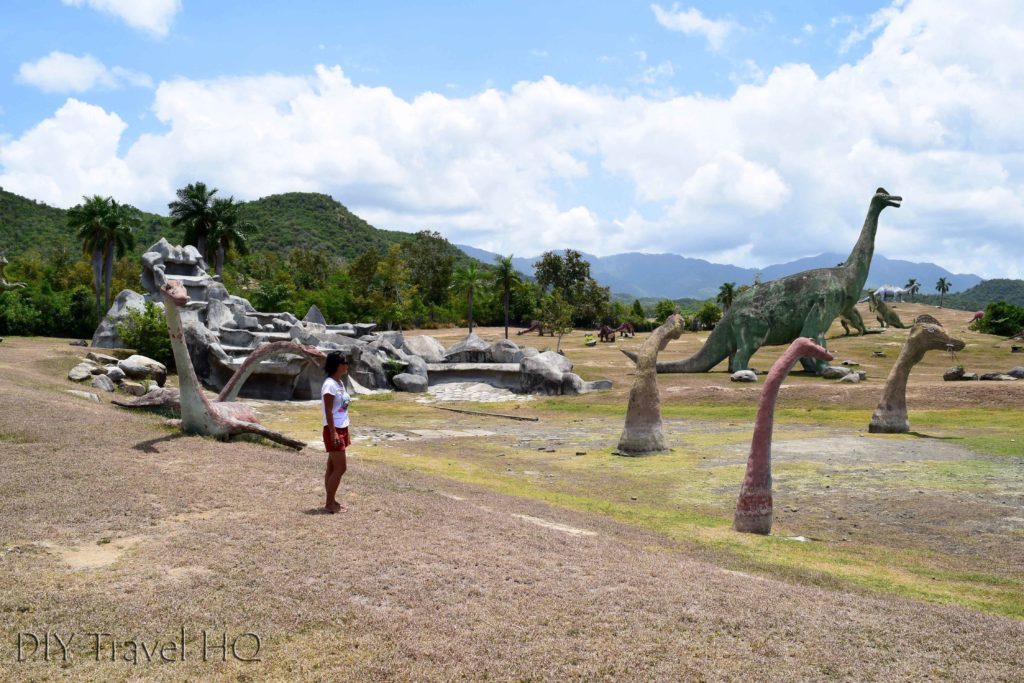 Brontosaurus’ in their grassy pool!

Does someone want to help me start a crowdfunding campaign for a real lake for the brontosauruses? They’re so parched, their paint is starting to dry & peel off.

Finally, climb to the top of a hill to find a hidden, not too large or scary-looking, T-Rex.

This spot also provides a lookout over the whole park, including a giant caveman we didn’t previously check out as it was near the orange marques where you may possibly have had to pay the CUC$1 camera fee…. 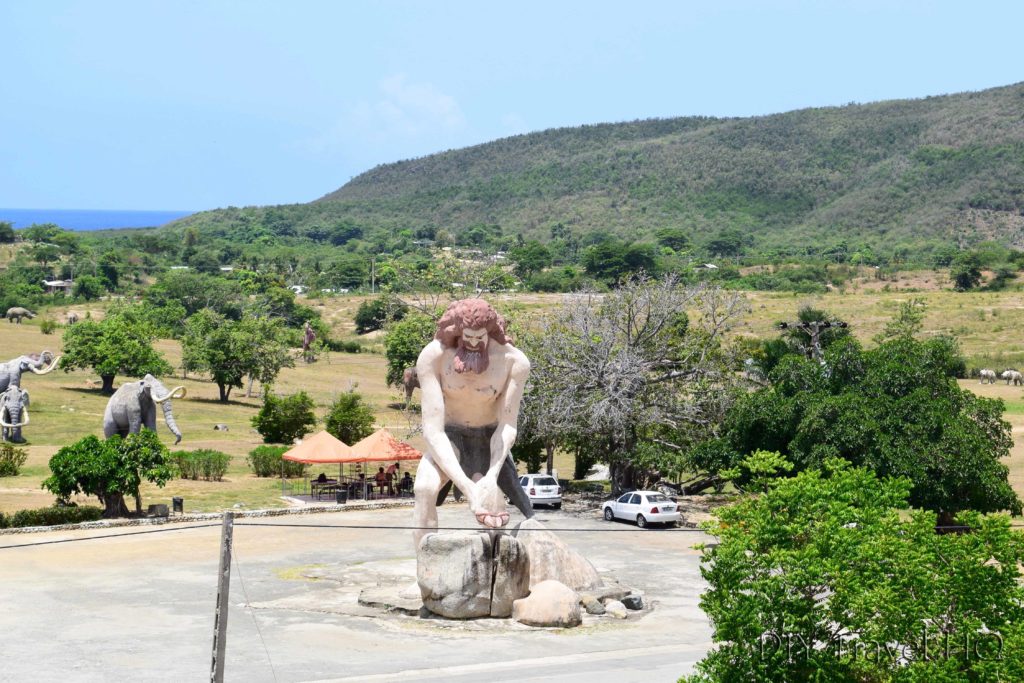 A massive caveman in between the two parks

Valle de la Prehistoria is so kitsch, so retro, so warped, so random… just so Cuban. 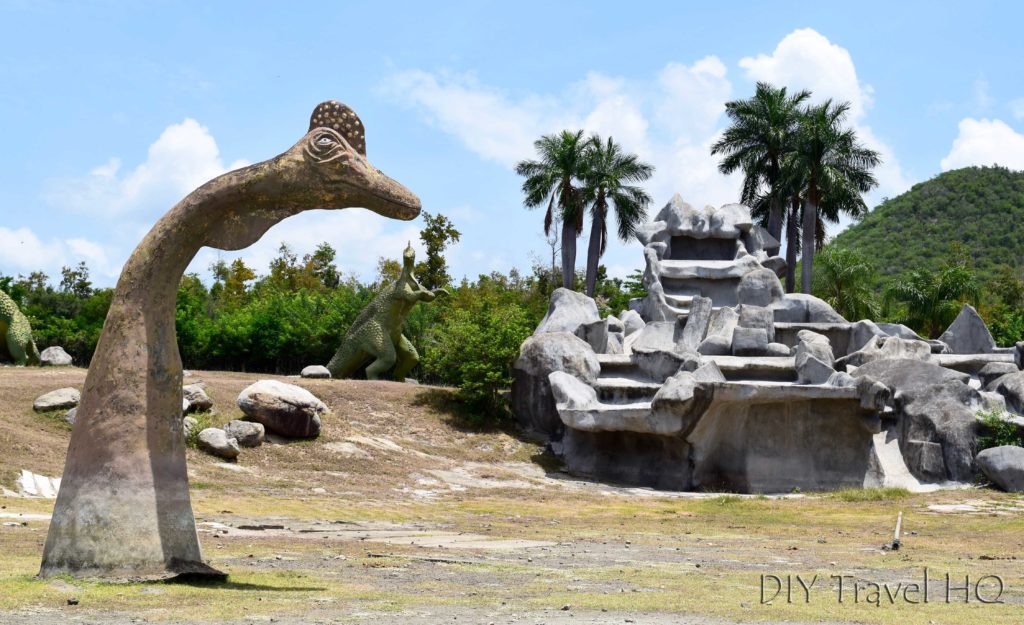 Goodbye Valle de la Prehistoria, we can never forget you!

Valle de la Historia is located in Parque Bacanao, a Unesco Biosphere Reserve that is home to more than 1800 endemic species of flora & fauna.

La Gran Piedra is 63,000 tonne boulder that measures 25x51m in height & length. It’s summit can be reached via a climb of 459 steps, where there are apparently awesome views of the Caribbean. We didn’t visit but La Gran Piedra can also be reached via local bus 764 from Santiago de Cuba, read more further below.

If you have your own wheels or are open to renting a car/driver for the day, Parque Bacanao would be an excellent daytrip from Santiago de Cuba. 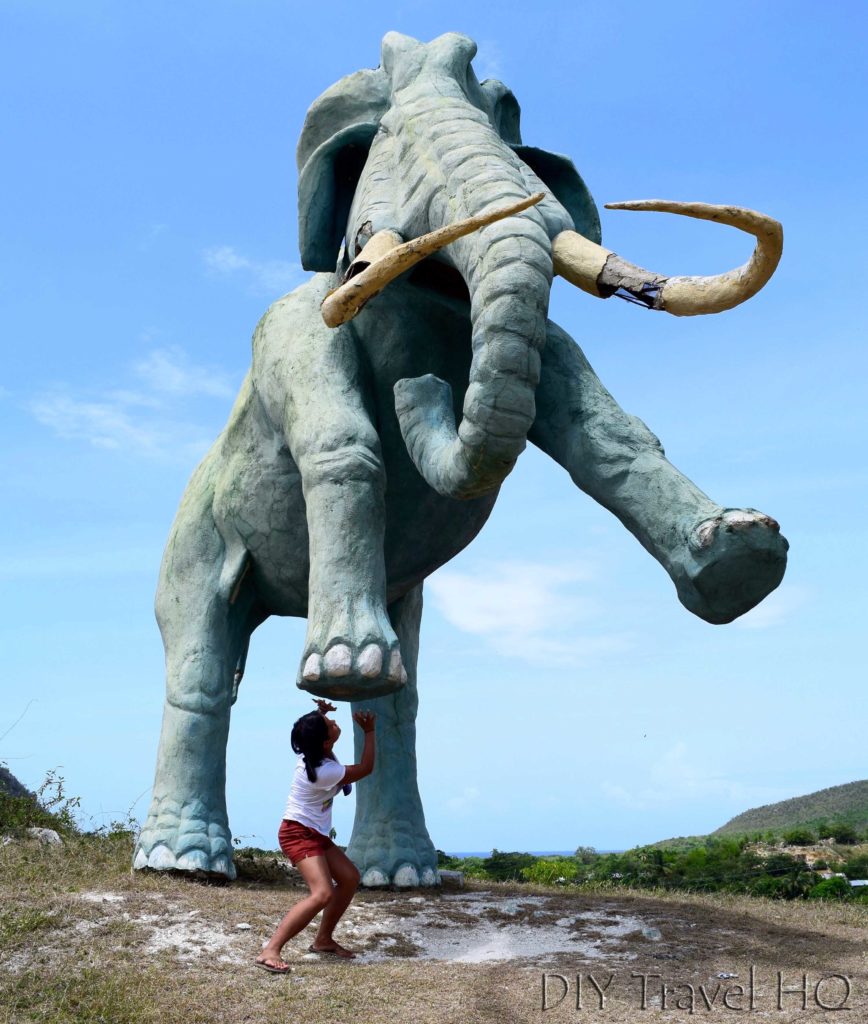 How to Get to/from Valle de la Prehistoria

In Santiago de Cuba, head to Terminal de Omnibus on Avenida de los Libertadores (Carretera Central). You can find it on Maps.Me but they have 2 terminals listed with the same name on the same street – you want the one closest to the city centre.

At the bus terminal, go up to the counter & purchase a ticket for Parque Bacanao or Bus 401. This costs 1 peso / $0.04 but you may be charged 1.45 pesos / $0.06 for the whole journey. Go early in the morning as buses don’t run all day – for travel efficiency, you could confirm times at the terminal the day before.

You’ll be given a piece of paper with a number on it & be told where to wait. Take your seat at the bench with your fellow passengers. 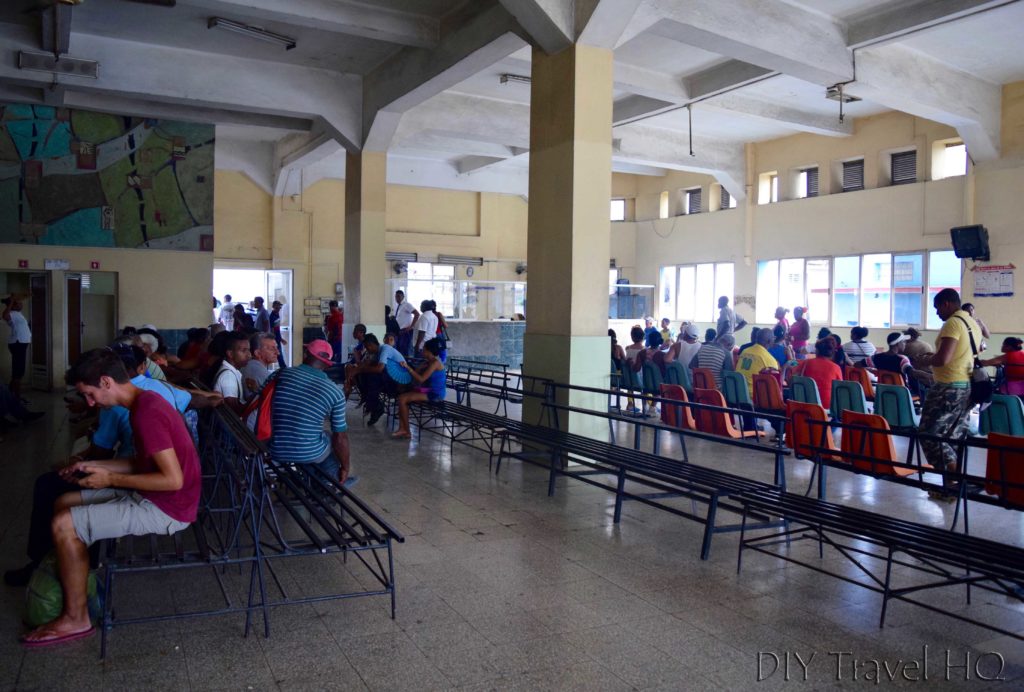 Once your bus or destination is called out, they’ll be lots of pushing & shouting. Numbers will be called out, when it’s your turn hand over your piece of paper to the attendant. They will then give you another piece of paper with a number on it, possibly your seat number, I can’t remember.

Then take your seat on the bus & await take-off!

Follow your GPS. Once you’re in Parque Bacanao, ask your fellow passengers when to get off for Valle de la Prehistoria.

To return to Santiago de Cuba, simply take a bus going in the opposite direction. They may not be so regular so to save waiting time, ask at the ticket booth if they know what times buses come. 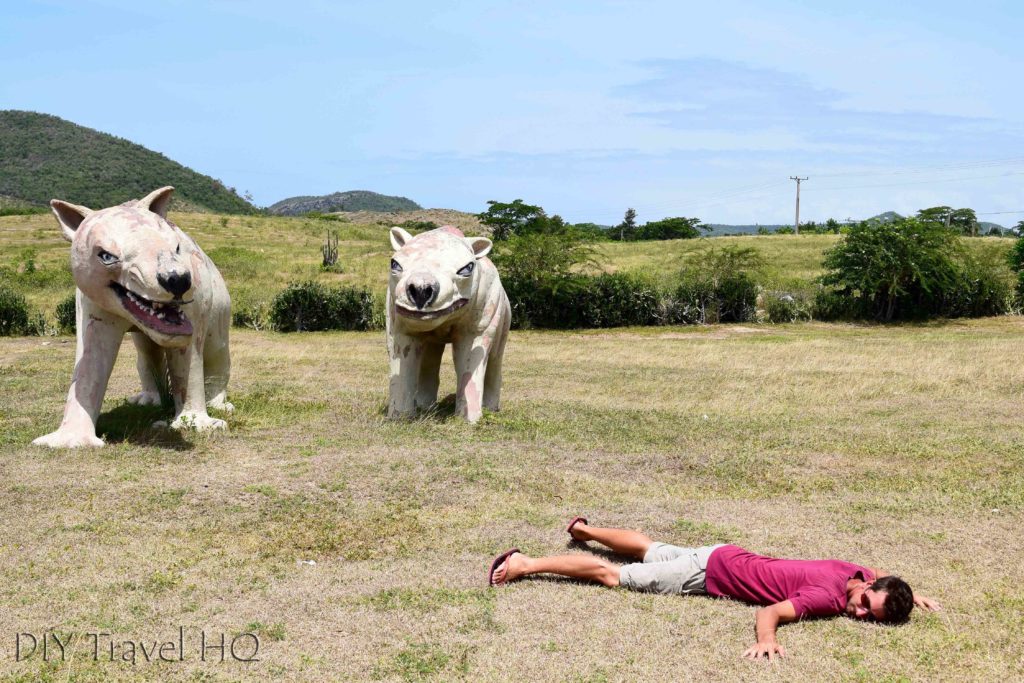 *** The Final Word – Valle de la Prehistoria is a breath of fresh air from the usual tourist attractions. Put this on your Santiago de Cuba itinerary! ***

What’s the best themed-attraction you’ve been to?!