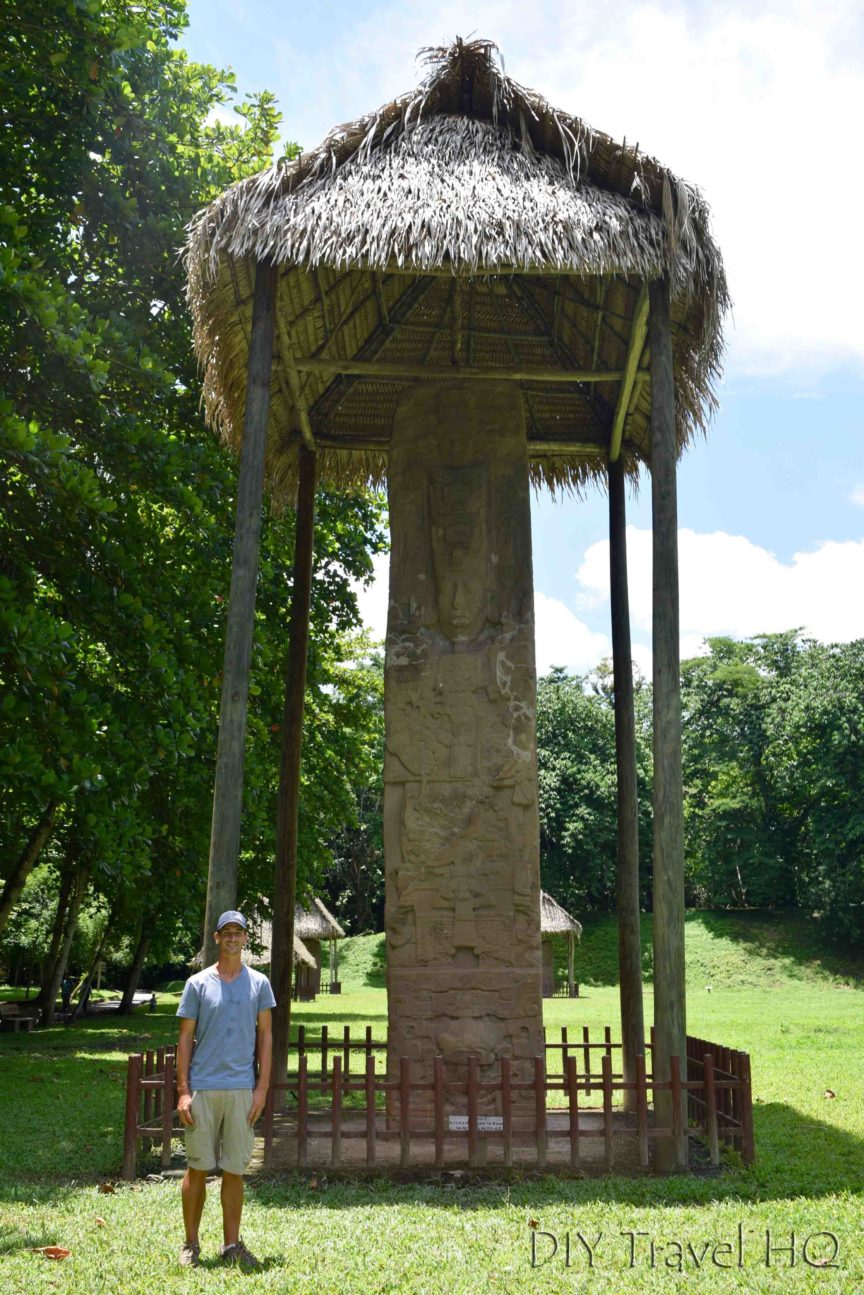 Quirigua, Guatemala has an impressive collection of Maya ruins including the tallest stelae in the world. Find out exactly what to expect when visiting this UNESCO World Heritage Site.

We recommend purchasing travel insurance before any trip to Guatemala. We’ve been using World Nomads in our travels through 80+ countries over the past 12 years. It’s the best-value provider we’ve found in terms of price and coverage and we haven’t had any issues when we’ve had to make (fortunately) minor claims.

Top 25 Places to Visit in Guatemala

Ruins, volcanoes, lakes, villages & markets… Guatemala is a country of adventure & culture, with Maya traditions alive & well. In our ultimate itinerary find out 25 of the best places to visit in Guatemala!

How to Get to Quirigua, Guatemala

Getting to Quirigua, Guatemala is easiest from Rio Dulce Town, and can be done as a stopover on the way to Coban. Catch a Fuente del Norte bus (Q25 / $3.25) around 8:30 am in Rio Dulce, and ask to be let off at the intersection of CA-9 and Ruinas de Quirigua.

From there you can take a tuk-tuk (Q5 / $0.65 per person) to the Quirigua National Park entrance, or hitchhike like we did. Worst case, you can walk the 3.4 km in 40 minutes.

The history of Quirigua is closely tied to that of the nearby Copan ruins, one of the top places to visit in Honduras.

It wasn’t until Quirigua leader Cauac Sky decided to take matters into his own hands that Quirigua started making their own history.

Rallying his troops, Cauac Sky was able to take Copan’s King 18 Rabbit hostage and executed him soon after.

The next 40 years saw Quirigua stonecutters, under the guidance of Copan experts, carve numerous stelae and zoomorphs in his honor.

The region surrounding Quirigua and Copan has a large sandstone quarry in Rio Motagua. Sandstone is perfect for creating large stelae since the rock is soft at first, but dries hard. Today, you see the fruit of their labors.

The ruins here are largely unexcavated, and attention needs to be drawn to the intricately carved stelae and zoomorphs instead.

This is one Maya ruin where the micro supersedes the macro.

As you can see in the photo below, we never leave home without our LifeStraw Go water filter bottle. It gives us drinkable water wherever we roam, saving us money and the environment at the same time.

At the entrance to the Quirigua Archaeological Site is a complex containing a museum, jade gallery, and bathrooms.

The museum helps show what Quirigua would have looked like, and offers explanations for the most important stealae and zoomorphs.

In a separate room is a jade gallery that walks you through different Maya uses before culminating in a gift shop.

They showed the importance of jade in the use of weapons and tools, and how it even accented teeth as a status symbol. The gift shop doesn’t offer dental implants, but does have more traditional jewelry.

Quirigua Archaeological National Park is comprised of two main areas. The most impressive is the Central Plaza that contains all the stelae and zoomorphs. The other area is the partially restored Acropolis.

The east and south groups have yet to be excavated. Each carved rock is denoted by a letter, so let’s learn our ABCs as we explore together.

We decided to skip the most impressive stelae, and leave them for last. Continue down the main path until you reach Stela H on the right.

This stela is noteworthy for the rare mat pattern hieroglyphs, which resemble weaving instead of traditional ‘text’. We like it because of the creepy guy holding a spear.

Zoomorph M started the whole stelae and zoomorph frenzy, as this crocodilian marks Cauac Sky’s bid for independence from Copan.

Consider this the Declaration of Independence for Quirigua, Guatemala.

Directly to the right is Zoomorph N, which features a turtle shell with a skeletal head on both ends. One of the heads represents God N, an underworld deity.

Zoomorph O is combined with an altar depicting a lightning god. Despite Zoomorph O’s poor rear condition, it is believed to be a crocodilian merged with a deer.

The most impressive Zoomorph at Quirigua is P. It measures 2x3x3.5 meters, and the entire surface area is intricately carved. That is 40 square meters! Weighing in at 20 tons, Zoomorph P is entirely dedicated to the turtle.

It features Sky Xul sitting cross-legged in the jaws of a turtle, and holding the ‘Manikin Scepter’. The other side features a cosmic monster.

Altar P depicts a deity performing a ritual dance before falling into the earth to be reborn.

An acropolis is a collection of buildings built on top of each other through the years. The purpose was more private, and restricted in nature. The rulers and priests used this area for residences and administrative purposes.

The acropolis is only partially restored, and takes an imagination to picture it as it was. Several buildings line a recessed plaza. Wander around before taking a quick forest walk to more stelae.

Stela K is dedicated to the last ruler of Quirigua, Jade Sky.

The carvings tell us that he was a divine tree with his roots planted in the underworld, body among the living, and his head rising to the heavens.

The hieroglyphs tell the story of Cauac Sky beheading Copan’s King 18 Rabbit. There is also a weird gingerbread meets Kenny from Southpark figure on one side.

This may have been the last stela created in Quirigua before it was abandoned due to drought. The carvings on Stela I depict Jade Sky surrounded by abundance.

Instead of depicting abundance at the time, it is thought that the carvings were in hopes of returning to prosperity.

Zoomorph G was dedicated to Cauac Sky by his successor Sky Xul just 85 days after passing.

The zoomorph is a very intriguing zoomorph. The left side features elements of a crocodilian, however the front nose looks like the snout of a jaguar. There is also an underlying frog appearance.

Stela F stands a whopping 7.3 meters tall, and only comes second to Stela E in the world. The north and south sides depict Cauac Sky, with hieroglyphs on the east and west.

Stela E is the monolith you came to see, and it is 10.6 meters long. It’s literally the biggest reason why people stop in Quirigua while traveling in Guatemala.

Roughly 3 meters is buried to keep it upright, but it still towers more than a 2-story building.

After a heavy rain in 1917, this monolith fell over but stayed intact. Upon trying to lift the 65 ton stela back into place, the cables snapped and broke the sandstone into two. It has since been pieced back together.

Cauac Sky is featured on Stela E, and the hieroglyphs tell the tale of his crowning by the ruler of Copan.

Stela D is similar to Stela K, but depicts Cauac Sky instead of Jade Sky.

The main difference is an extra skull in the heavens and two faces representing fear at the base. This was meant to display Cauac Sky as distilling fear from head to toe.

Stelae A and C are twins, and were dedicated the same day in 775 AD. Stela C hieroglyphs tell the story of Maya creation.

Zoomorph B is the most symbolic, and probably important zoomorph at Quirigua. The body is shaped as a turtle, but the front depicts three animals with shared features.

They include a jaguar, snake, and crocodile. It also includes Cauac Sky and the three creation stones.

For more information and highlighted aspects for easy visualization, visit the amazing website UncoveredHistory. Save the web pages before visiting so you know what you are looking at.

Did you enjoy reading about the Quirigua ruins?
Pin the images below & help others find it too!

*** The Final Word – We were hesitant to visit Quirigua with the Q80 admission knowing the site was small, but we can recommend it for those that like to admire finer details ***