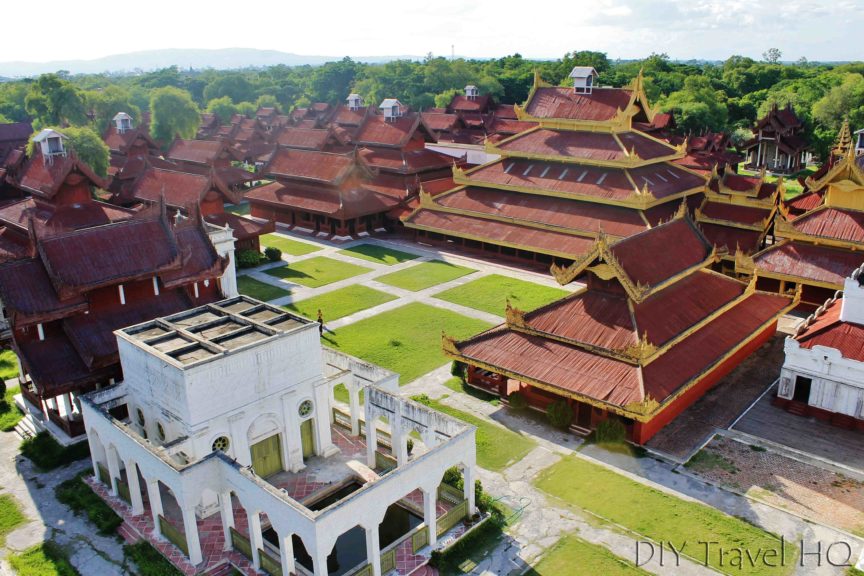 The Mandalay Archaeological Zone ticket covers all the things to do in Mandalay – find out what’s included & see for yourself which temples are worth visiting.

Things to do in Mandalay

Of them all, only Mandalay Palace and Shwenandaw Kyaung checked for tickets.

But we here at DIY Travel HQ feel that they are both outstanding attractions, making the ticket somewhat necessary if you want to cover all the best things to do in Mandalay.

Besides, the many things to see & do is one big reason why Mandalay is better than Yangon 🙂

* Don’t forget to purchase travel insurance before any trip to Myanmar. We’ve been using World Nomads for over 10 years. It’s the best-value provider we’ve found but there are other important things to consider. Check out our post and find out which of our claims were successful or denied. 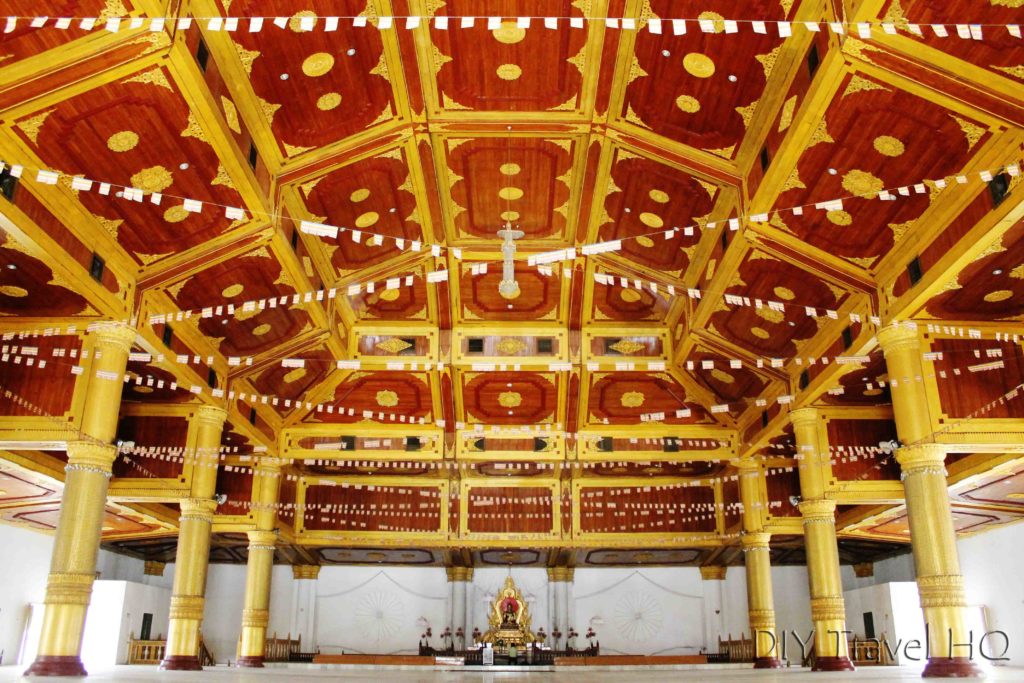 Like Beijing’s Forbidden City, the Mandalay Palace & Fort complex was more than just royal living quarters, it was a walled city within Mandalay.

However, unlike its Chinese counterpart, little of the original palace survives today.

First, British colonial forces arriving in Mandalay in 1897 looted and pillaged the buildings, then in World War 2, it was completely razed to the ground. 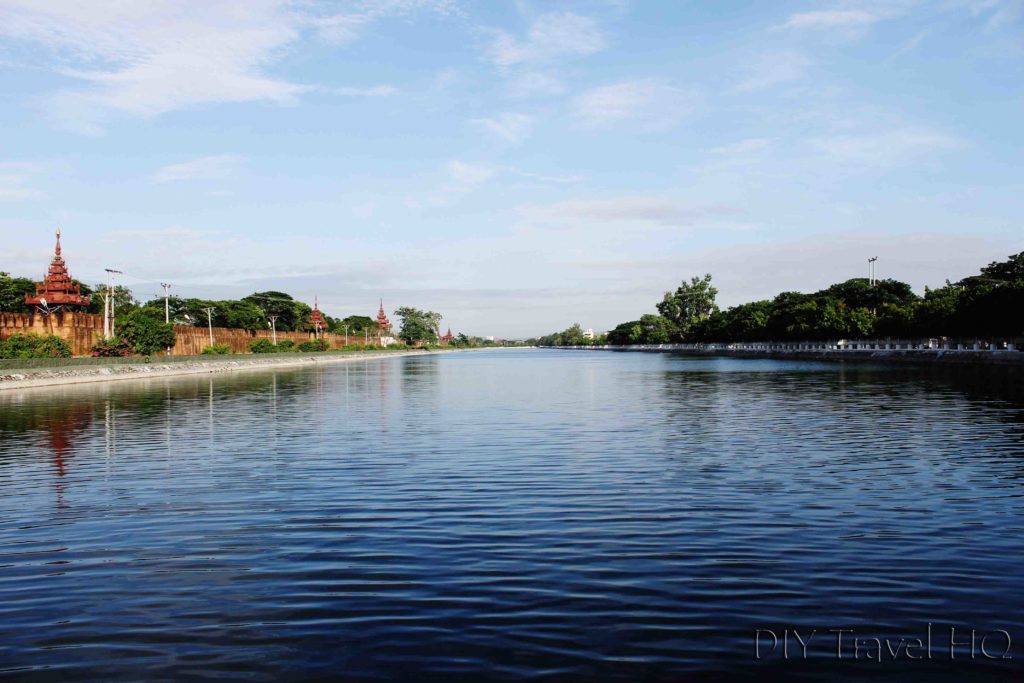 A faithful, yet controversial, reconstruction process began in 1989, with the use of modern techniques and materials, particularly corrugated metal and concrete, rather than the original teak wood.

The main palace platform includes the great audience hall, lion throne room and glass palace, with little to no replicas, furnishing and signage.

On the grounds are a hluttaw (Supreme Court), royal mausoleums, royal mint, clock tower, relic tower, and watch tower – from which there are wonderful views. 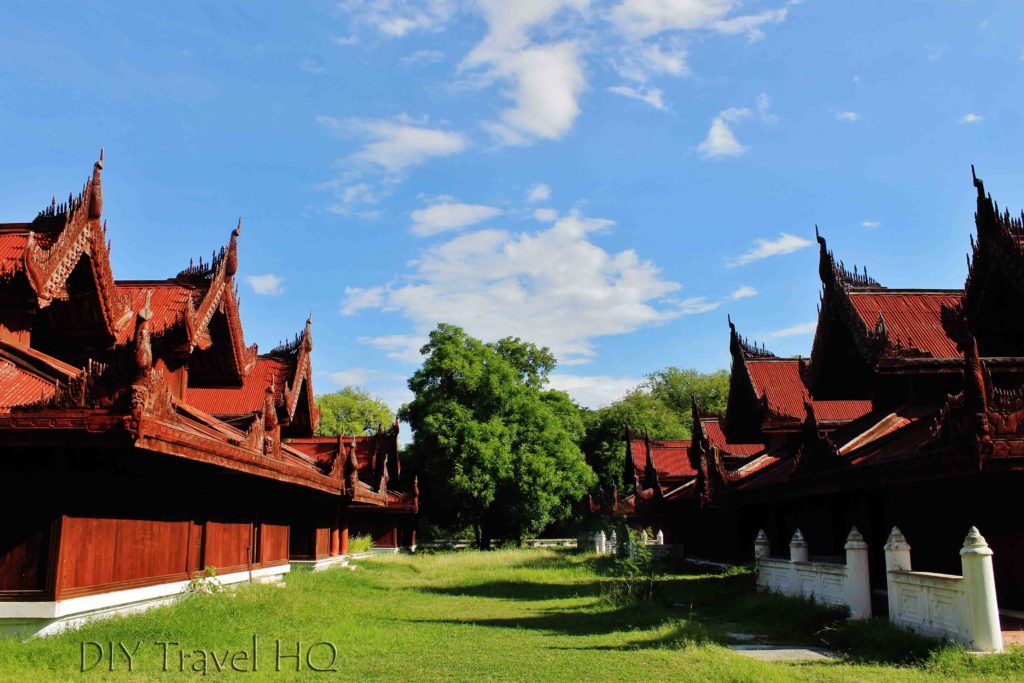 Some of the many buildings on the vast grounds of the Royal Palace, one of the best things to do in Mandalay

For Mandalay’s most visited and historically important site, the compound is rather underwhelming and uninspiring – we preferred the ancient royal cities of Sagaing & Inwa outside of Mandalay.

However, against a backdrop of bright blue skies and glistening green grass, the ochre roofs, golden spires and white buildings evoke the regal magnificence of yesteryear.

Visitors may enter only from the east gate. 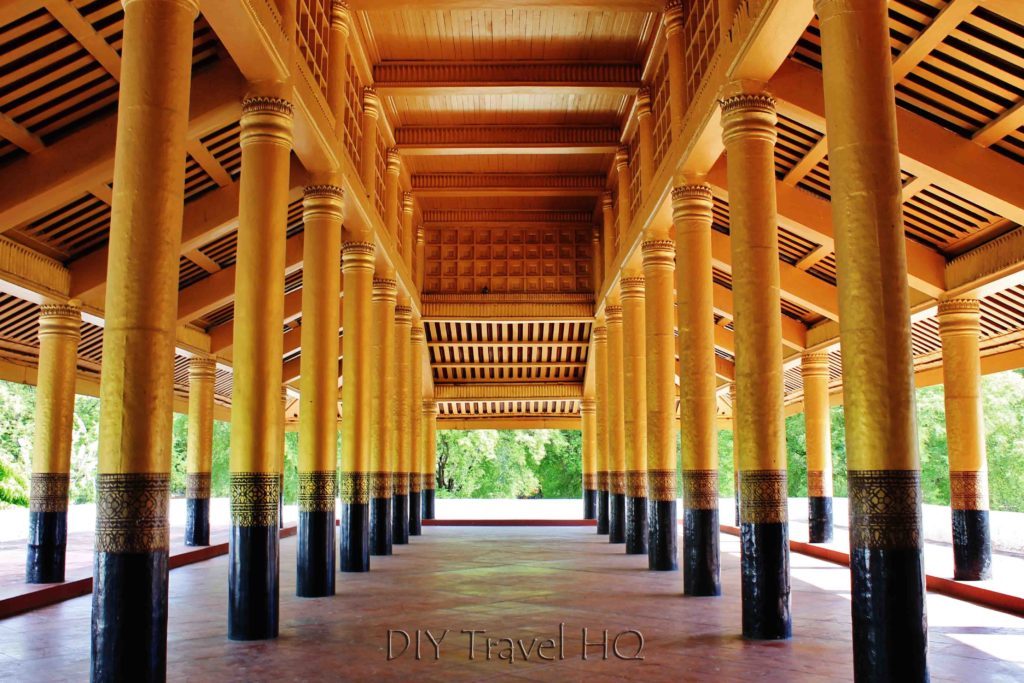 Here, the best viewpoint in the city can be accessed via a long stair climb or a taxi, escalator and lift option to the top of the Hill.

Either the way, the journey is thoroughly rewarded with an incredible panorama of Mandalay: 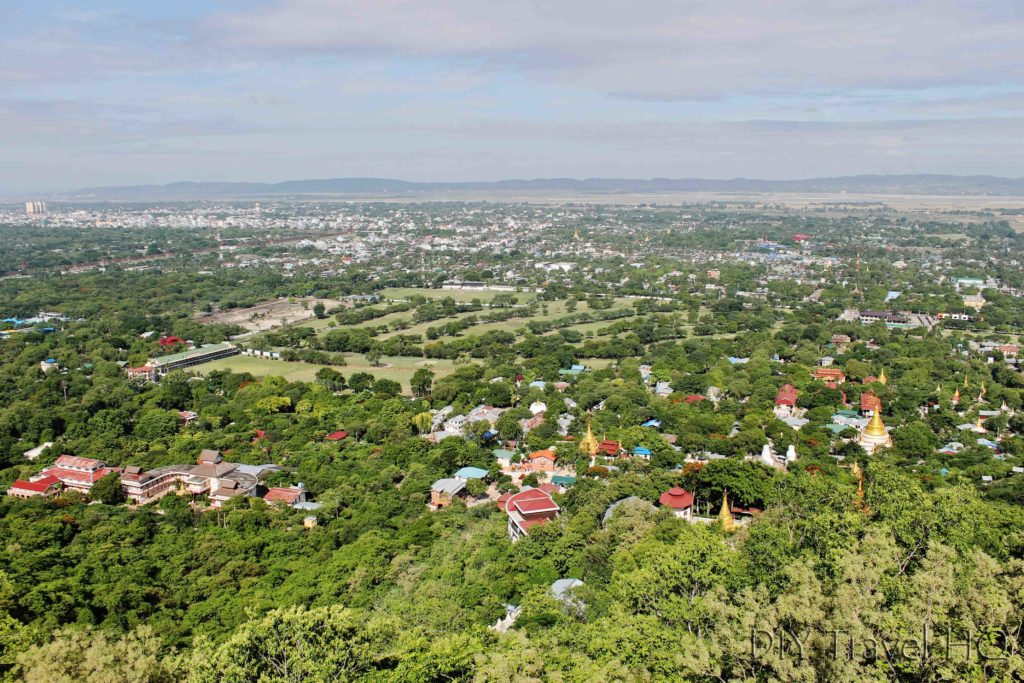 The view of evergreen Mandalay from Mandalay Hill

Taking the more demanding option, under the covered stairway of the Mandalay sun, the way up by foot is laborious and seemingly unceasing.

At every landing which appears to be the summit is, just, yet another pagoda or monastery – and more stalls and sellers of snacks and souvenirs.

It is a cultural, social and physical exercise, as much about the journey as the destination. Don’t miss one of the best Mandalay attraction. 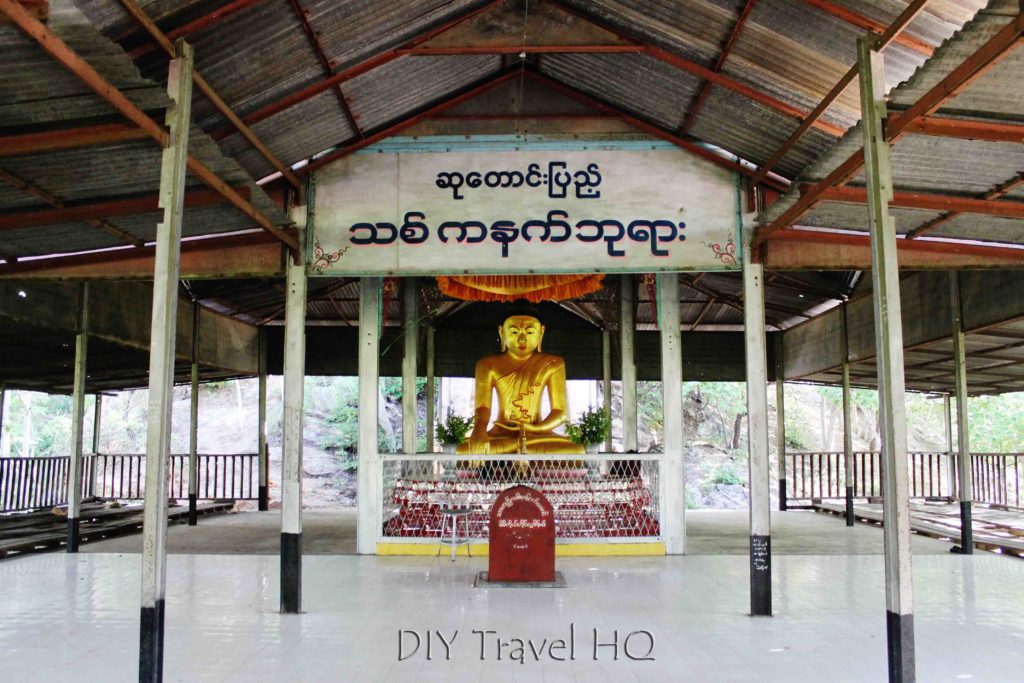 According to ancient history, only five likenesses of the Buddha were created in his lifetime – 2 in India, 2 in paradise and the 5th in Myanmar.

It is housed here at Mahamuni Paya, cast in bronze and weighing 6.5 tonnes.

Seated on a throne upon a 6-ft high pedestal, the Buddha measures 3.8m in height.

Together with Shwedagon Pagoda and the Golden Rock on Mount Kyaitiyo, it is a major pilgrimage site for Burmese Buddhists & one of the top things to do in Myanmar for tourists. 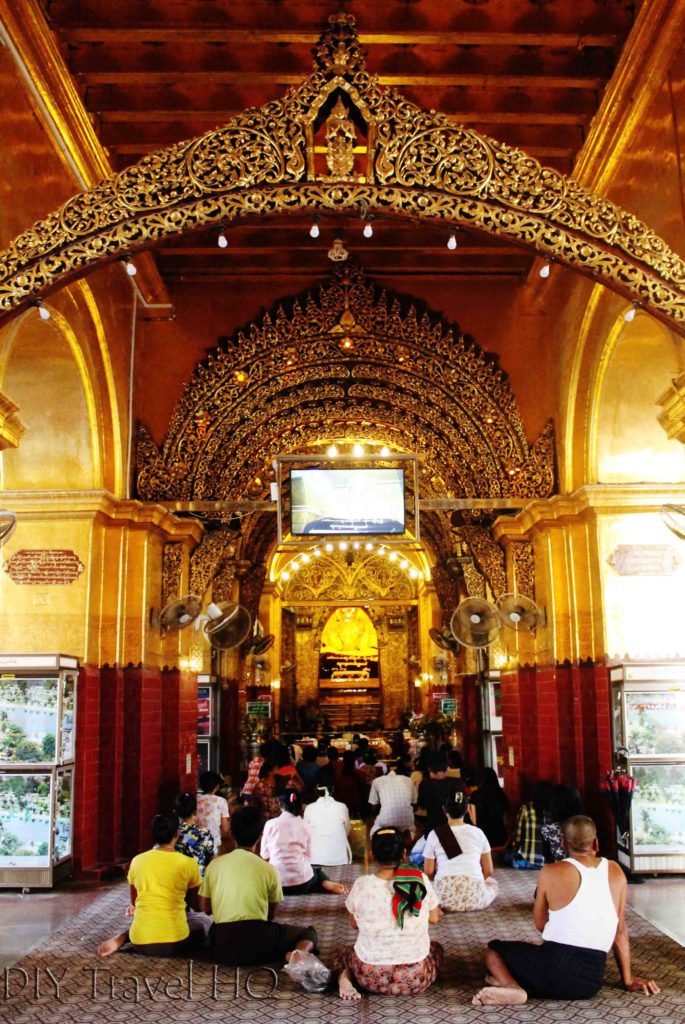 The entrance leading to the Buddha image is lined with shop stalls, crowds, noise and blasting music.

Such overt displays of commerce and enterprise is commonplace in pagoda’s across the country, where Buddhism is completely intertwined with day-to-day life.

Yet, for many foreigners, it can be a somewhat confronting and uncomfortable experience, challenging assumptions and associations more commonly associated with religious reverence. 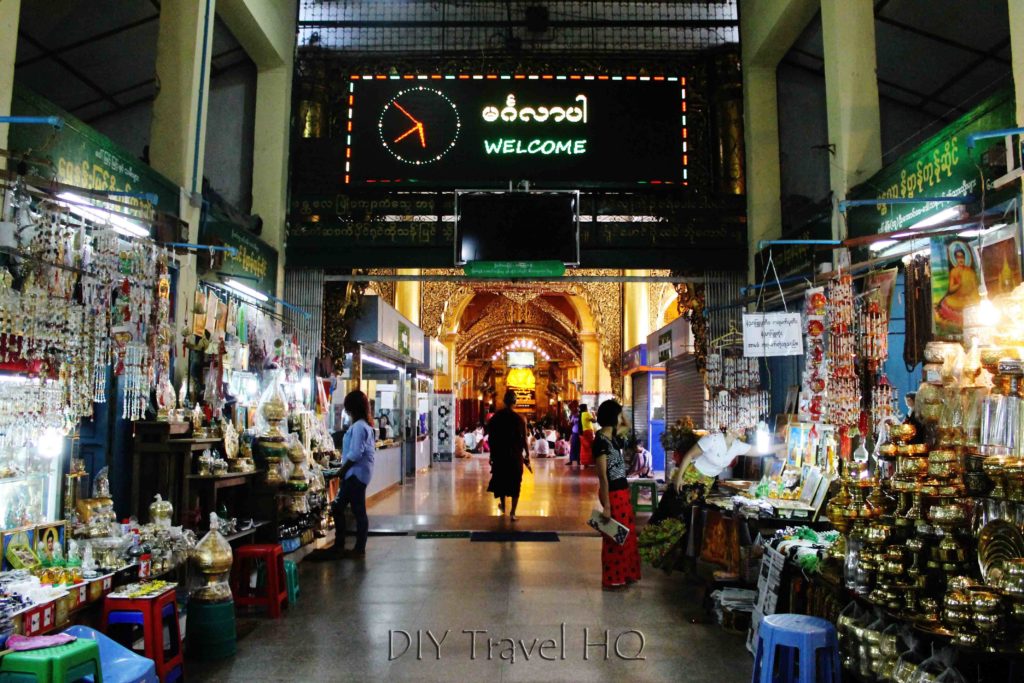 Temples across Myanmar are lined with stalls, trinkets & blasting music

The temple is part of a larger complex set on pleasant grounds, with stone carving workshops in the behind the the complex. 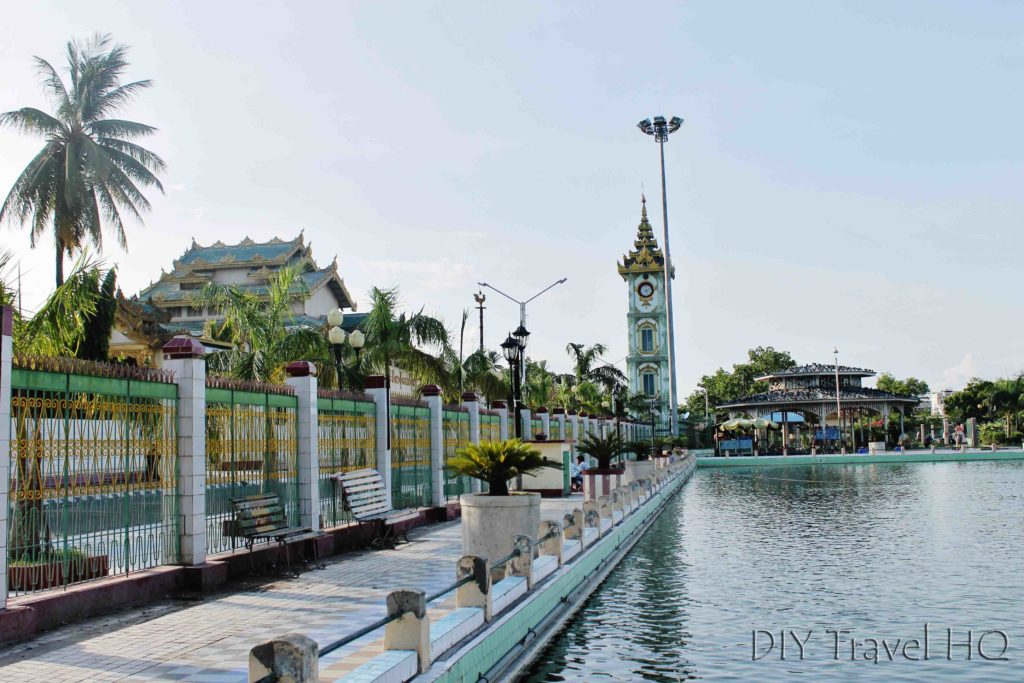 What to do in Mandalay? Wander the pleasant grounds around Mahamuni Paya

Roaming lost in the pages of the World’s Largest Book is one of the top Mandalay attractions.

Each of the 729 marble slabs at Kuthodaw Paya are inscribed with a page of the Buddhist canon Tripitaka.

They are housed in an individual stupa, surrounding a central 57m high golden stupa. A 730th slab lies in one of the corners, telling its own story of the site’s construction.

Each stone contains 80-100 lines chiselled in Burmese script, on both sides, originally in gold.

It is said that, reading for 8hrs a day, it would take 450 days to complete reading of the entire “book”. 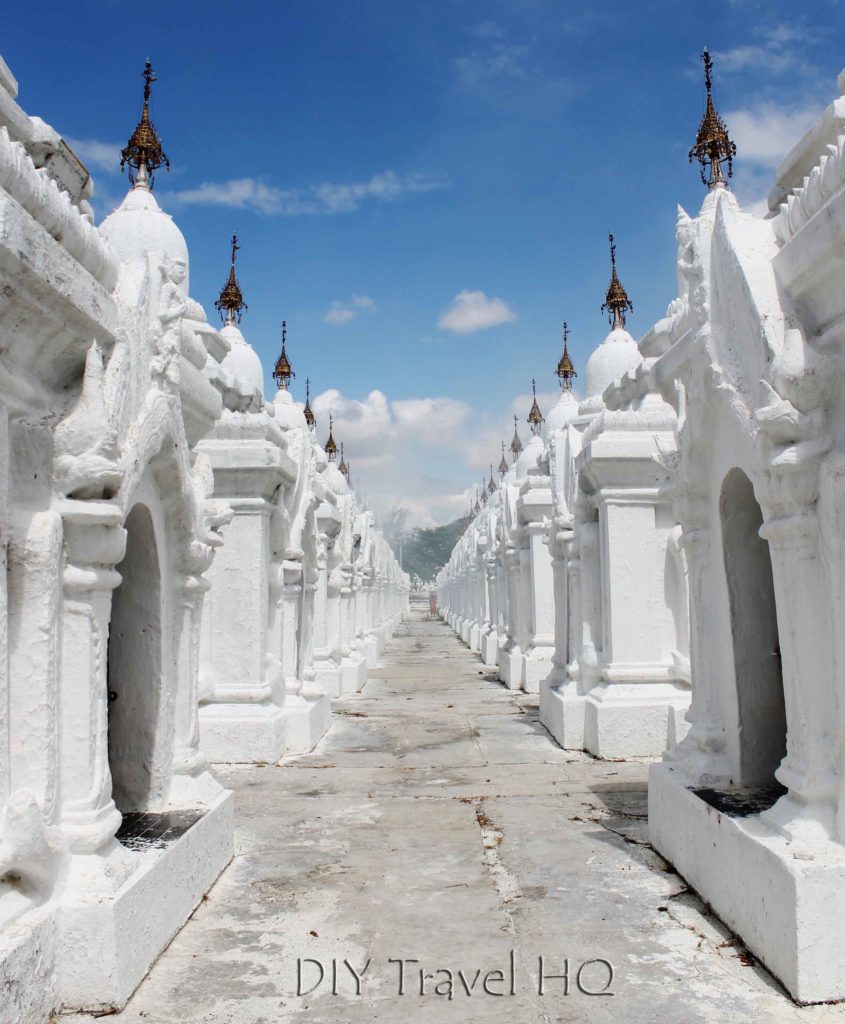 Still wondering what to do in Mandalay?

In the shadow of Kuthodaw, this similar site is underrated and, if visited first, overwhelming.

It is comprised of 1773 marble slabs of Buddhist script – more than Kuthodaw.

However, its inscriptions are commentaries on the Tripitaka, not the official text itself, thus disqualifying it from holding Kuthodaw’s famous title. 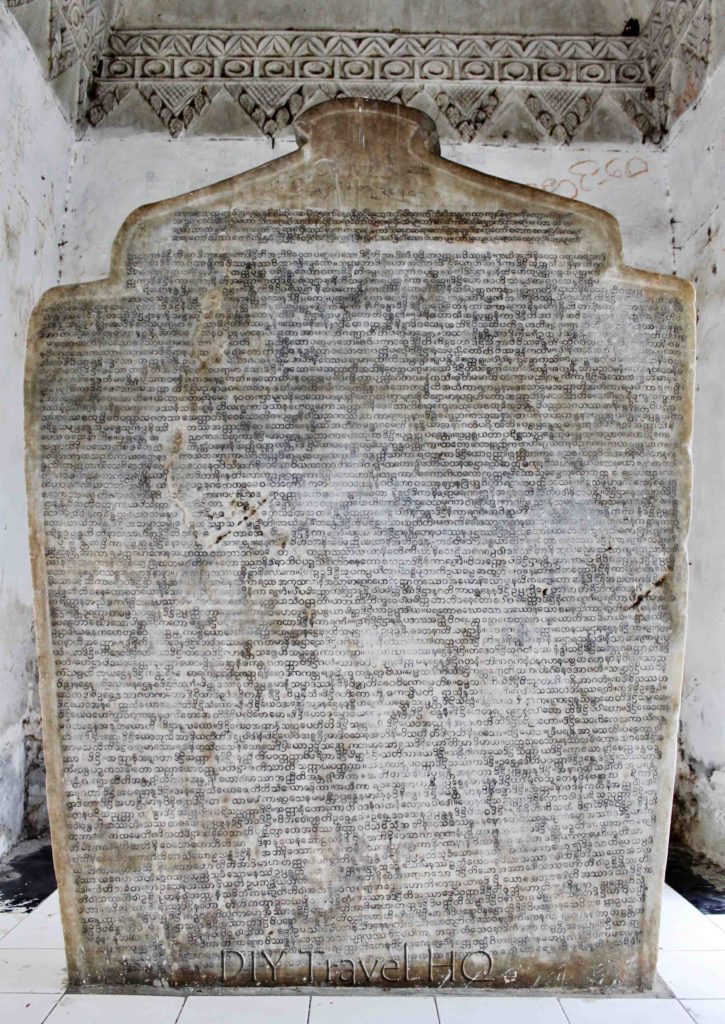 One of 1773 marble slabs of Buddhist script at Sandamuni Paya

The stupas are also placed closer together than those at Kuthodaw. 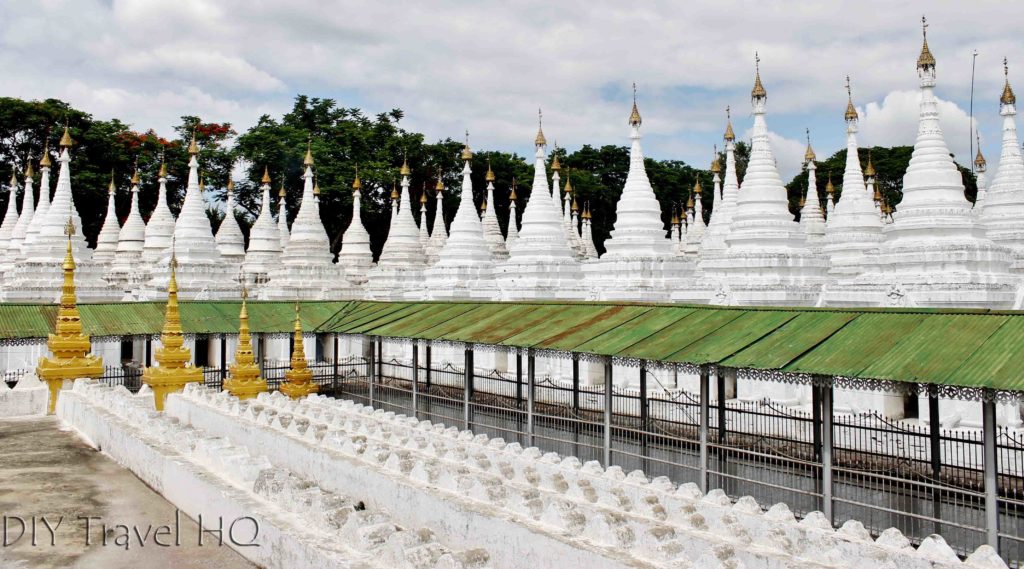 Shwenandaw Kyaung was originally part of the royal palace where King Mindon lived, and is the only major original building that remains.

Inside, the golden pillars and ceilings definitively display their age and history – it is a fragile, and fine, masterpiece in Burmese teak wood architecture. 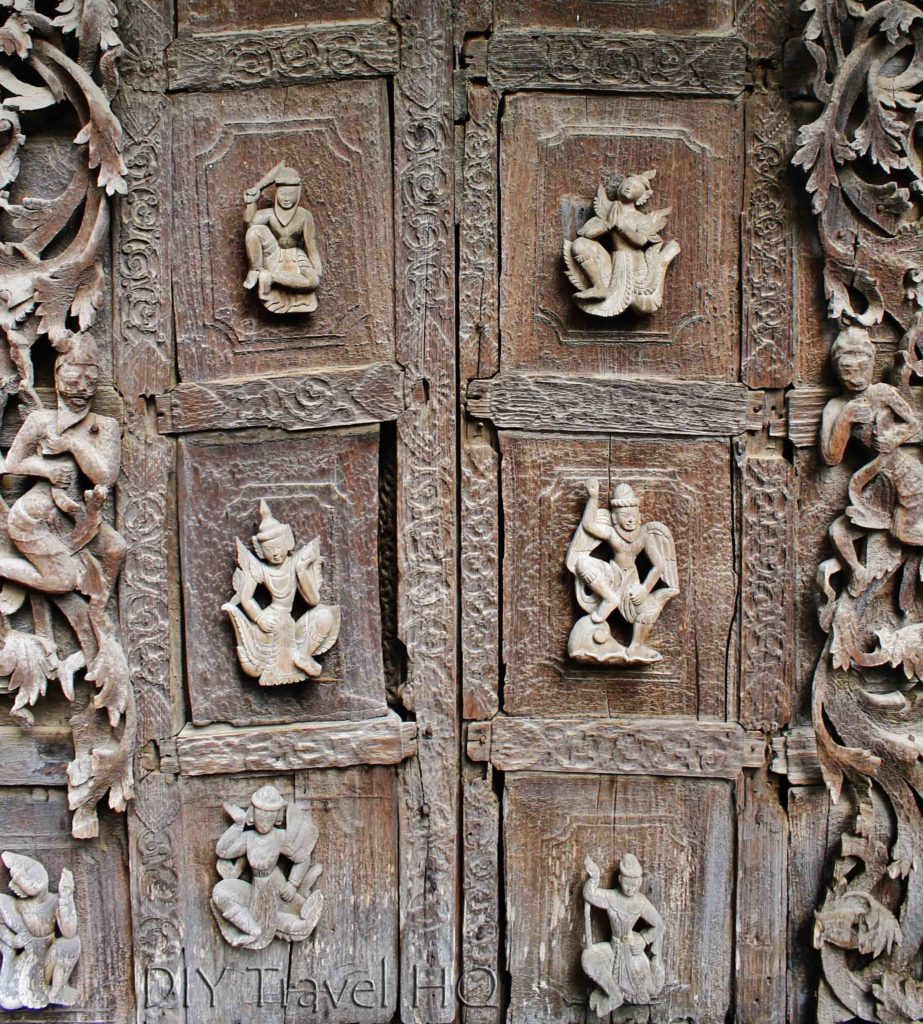 One of the many intricate wood carvings found at Shwenandaw Kyaung

Unlike Mandalay’s other primary monasteries, the grounds of Shwe In Bin Kyaung remain inhabited with live-in monks.

Visit the Mahagandayon Monastery in Amarapura (outside Mandalay) if you’re interested in seeing monks receiving lunch.

Shwe In Bin is another stunning teak structure: the main building is raised on poles, with a large balustrade stairway.

With thin, soaring spires and equally ornate engravings and detailing, Shwe In Bin is constructed in the fashion of Shwenandaw, evoking too, the same awe-inspiring wonder of skill and beauty. 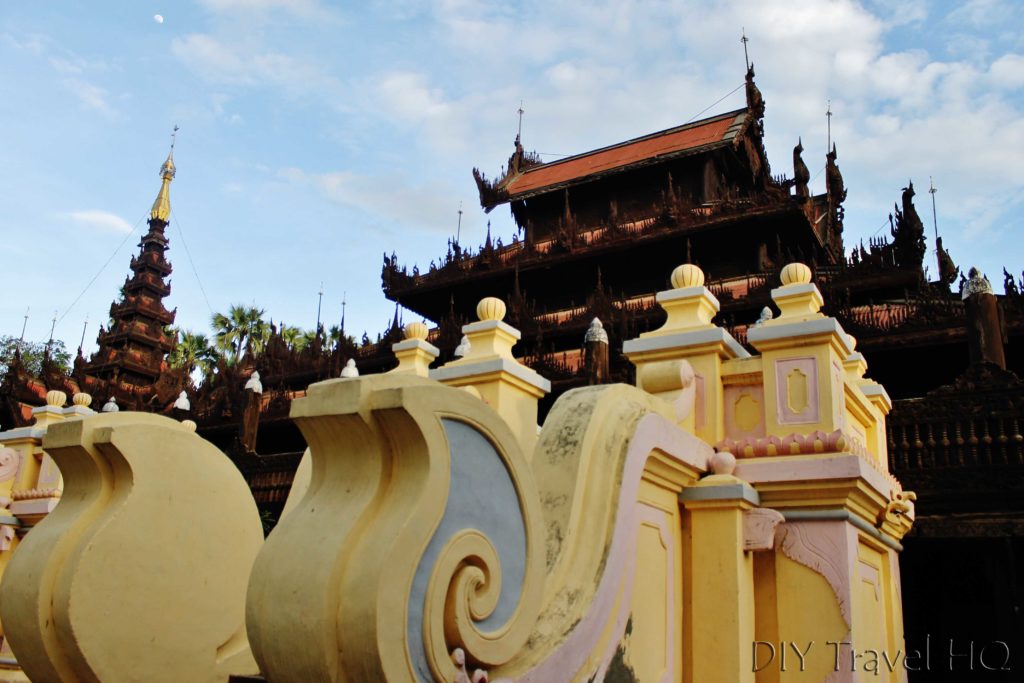 Notable for its yellow, ochre and white five-tiered wedding cake structure, the monastery was originally built from teak wood, before being heavily damaged in an 1890 fire.

Inside it is a large, largely empty hall with a Buddha statue; outside, the peeling stucco reveals its brick foundations. 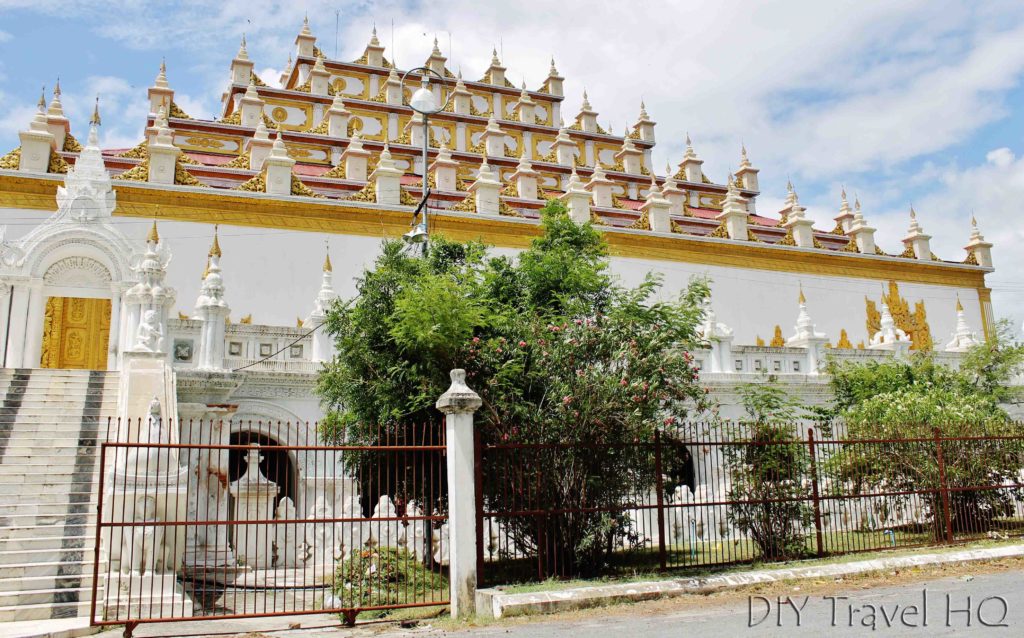 In a city of exceptional monuments, the temple would be of lesser interest – save for an 8m tall, 900 tonne Buddha carved from a single block of marble.

This makes it one of the most impressive Mandalay tourist attractions.

Legend has it that the marble originated from a nearby canal, requiring 10,000 men 13 days to transport it to its current site. 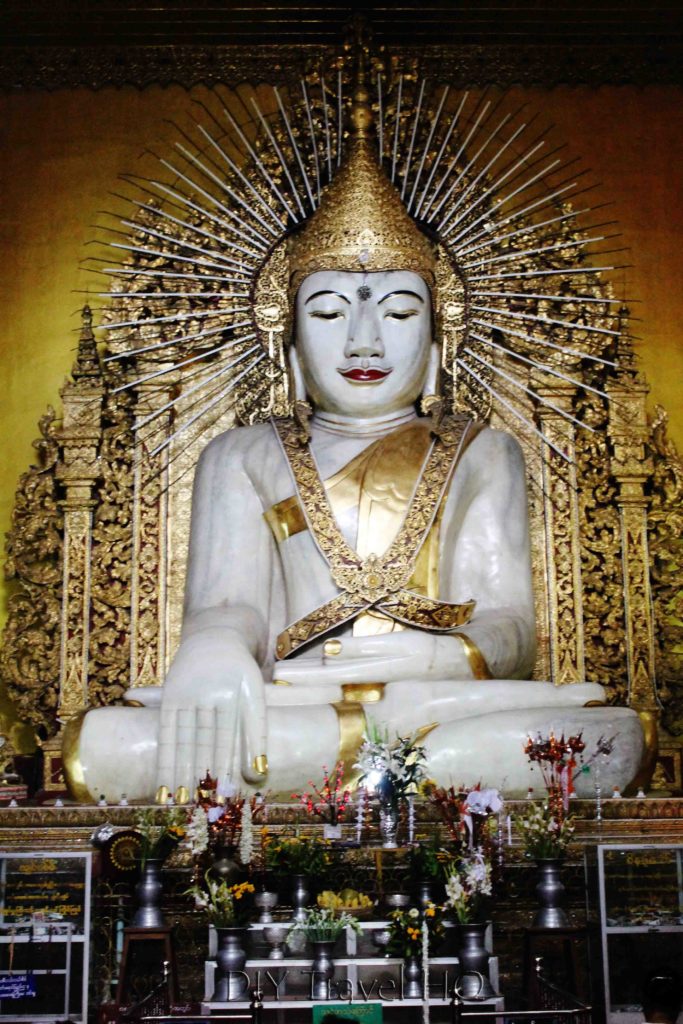 An 8m tall Buddha carved from one single slab of marble

Did you enjoy reading Top 9 Temples & Things to do in Mandalay? 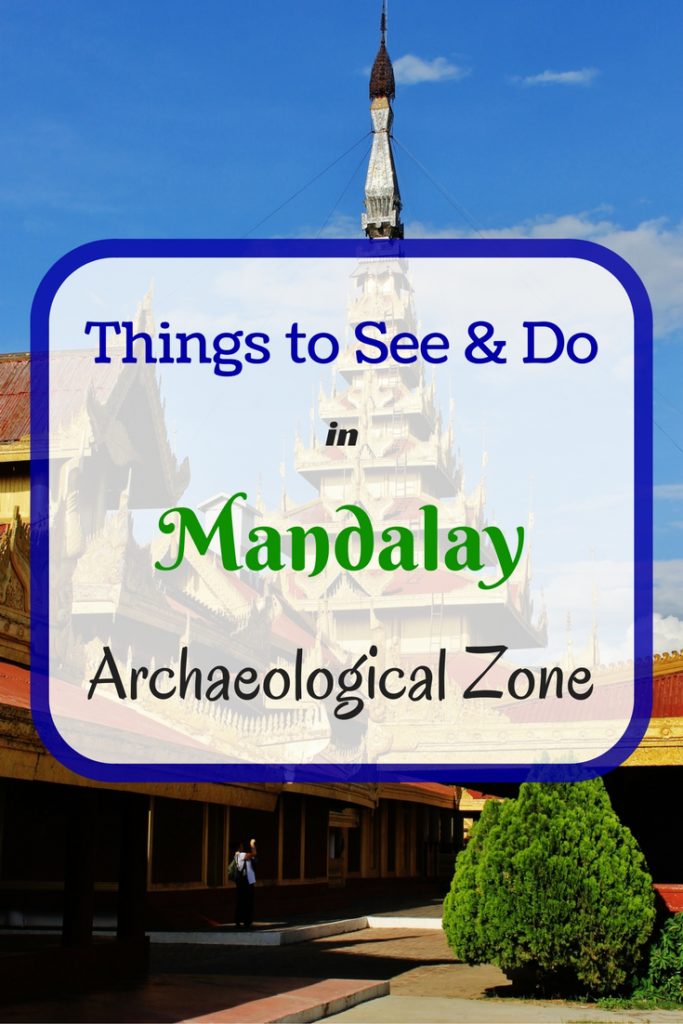 What was your favorite tourist attraction in Mandalay?