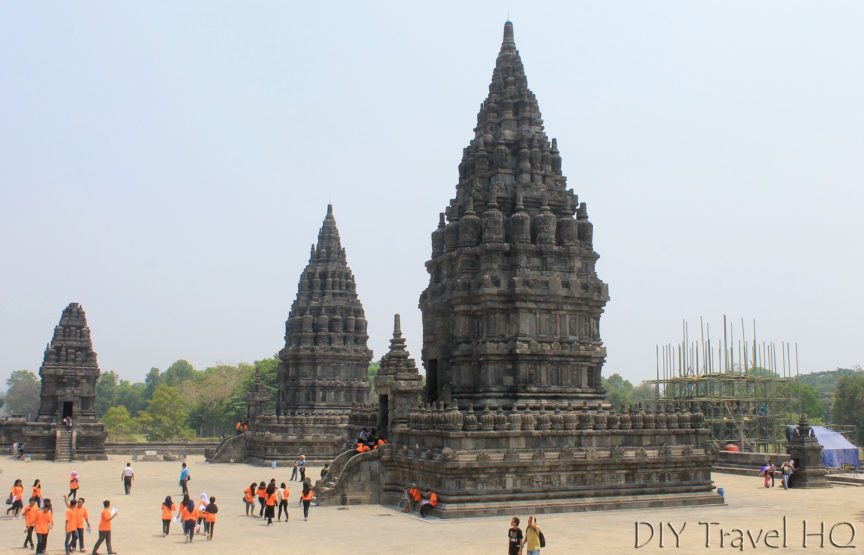 Forget the tours & guides – read about the history of Indonesia’s biggest Hindu temple and find out the Prambanan temple entrance fee & how to get to there for as little as 25 cents!

So do you want to know exactly how to get to there?! We here at DIY Travel HQ will get straight to it…

Find more inspiration in one of the Indonesia guide books below!

How to Get to Prambanan by Bus from Yogyakarta

Do you want to know the Prambanan temple entrance fee?

We recommend purchasing travel insurance before any trip to Indonesia. We’ve been using World Nomads in our travels through 80+ countries over the past 12 years. It’s the best-value provider we’ve found in terms of price and coverage and we haven’t had any issues when we’ve had to make (fortunately) minor claims.

So what’s so special about the Prambanan?

Well, it’s the biggest Hindu temple site in Indonesia & one of the largest in Southeast Asia.

It’s a UNESCO World Heritage Site, of special significance for its tall & pointed temples, characteristic of Hindu architecture but unique for Java during its ancient Buddhist era.

In almost any other place on Earth, Prambanan would be a national treasure.

However in Indonesia, it stands in the shadow of Borobudur, just 51kms away – it’s also simple to get to Borobudur by bus from Yogyakarta.

Visit Borobudur Without a Tour

Read facts on the world’s largest Buddhist temple, find out the entrance fee & how to get to Borobudur by bus from Yogyakarta

Both sites have similar histories but are quite different in architecture & style.

Buddhist Borobudur is one massive, bulbous temple whereas Hindu Prambanan is a collection of sculpted, vertical towers.

The contrasts & comparisons between the temples are as interesting as they are contentious. Often overlooked, Prambanan is an incredible monument in its own right & an ancient wonder of the world, not to be missed!

These photos were all taken with my old Canon Rebel T3 but I have since upgraded to a Nikon D3300 DSLR.

Prambanan was built between the 8th & 10th centuries by the Mataram Kingdom, rulers of central Java & conquerors of the Buddhist Sailendra Dynasty (who founded Borobudur some 50 years earlier).

Not long after it was established, the Hindu-Javanese Kingdom shifted to East Java around 930 AD.

This marked the start of the decline of the site, which reached its ultimate end in the 16th century when a devastating earthquake caused most of the temples to collapse.

Like Borobudur, the Prambanan temples laid hidden in the jungle until the short-lived British occupation of Indonesia in the early 19th century. A surveyor working for Sir Thomas Stamford Raffles (founder of modern day Singapore) stumbled upon the ruins by sheer chance.

Not much was done with the discovery during the 5 years of colonial rule.

When the British left in 1816, the complex was left in the hands of locals & looters – Dutch residents took statues for their gardens & villagers used its stones as building material.

Attempts were made to uncover the site in 1885 but it wasn’t until 1937 that proper restoration efforts began, which continue to this day.

Prambanan was originally a complex of 244 temples.

Most have been destroyed or deteriorated, with the temples still standing arranged in 2 sections:

This is the most popular & holiest area in the complex.

It consists of 8 major temples & 8 small shrines on a square elevated platform.

The 3 main inner shrines are dedicated to Brahma the Creator, Vishnu the Keeper & Shiva the Destroyer.

Candi Shiva Mahadeva is the largest of the temples, with its main spire reaching 47m high.

Dedicated to Shiva the Destroyer, it features vibrant, carved reliefs of the Ramanaya – they tell the story of how Lord Rama’s wife, Sita, is abducted & how Hanuman (the monkey god) & Sugriwa (the white monkey general) find & release her.

To follow the story, start from the top of the main eastern stairway & go around the temple clockwise.

A few are fully restored but most lie in ruins.

Candi Sewu, or the “Thousand Temples,” consists of a large central temple surrounded by 4 circles of 240 smaller “guard” temples.

It’s been recently renovated but much of it remains in ruins.

It’s seldom visited by tourists but definitely worth the short trek, or you can hop on a toy train.

Candi Sewu is a huge monument, with finely carved niches around the inner gallery, reminiscent of similar-style stupas found at Borobudur.

Foreigners enter through a separate entrance with a shorter queue. Complimentary coffee/tea/water is provided on request. A sarong is provided & must be worn.

Always be aware of pickpockets. We recommend wearing a money belt with RFID blocking & traveling with an anti-theft daypack.

A toy train runs from the museum to Candi Sewu – there may be a small fee or possibly free.

Arrive as early as possible – though it’s not a renowned place for sunrise or sunset like Borobudur, tour groups start arriving from 9am.

Many locals & students will approach you to practice English & take photos with you!

Along Jalan Sastrowijayan in Yogyakarta, many vendors offer tours to Prambanan & Borobudur, the best things to do in Yogyakarta.

We took a “tour” from an agency associated with our accommodation, Hotel Dewa, which was actually just private transportation to Prambanan & Borobudur. This cost 100,000 IDR / $7.50 each. It did not include the Prambanan admission fee.

Visiting both temples in 1 day via public transport is also possible but not recommended.

Instead, spend a full day each at Borobudur & Prambanan (though half a day is enough for Prambanan) – after all, you’ve paid a lot of money for the entrance fee & there are many other temples around each area to explore.

How to Get to Prambanan: Buses

We took a tour because we researched the bus times & prices incorrectly of how to get to Prambanan from Yogyakarta.

Here’s the accurate information you need to travel from Borobudur to Prambanan:

The Final Word: Prambanan is an easy & fascinating half-day temple trip from Yogyakarta

Which temple do you prefer – Prambanan or Borobudur?

Did you enjoy reading our guide to Prambanan Temple?
Pin the images below & help others find it too!

Disclaimer: This post contains affiliate links, which means that we receive a small commission if you click on a link & purchase something that we have recommended – at no extra cost to you.