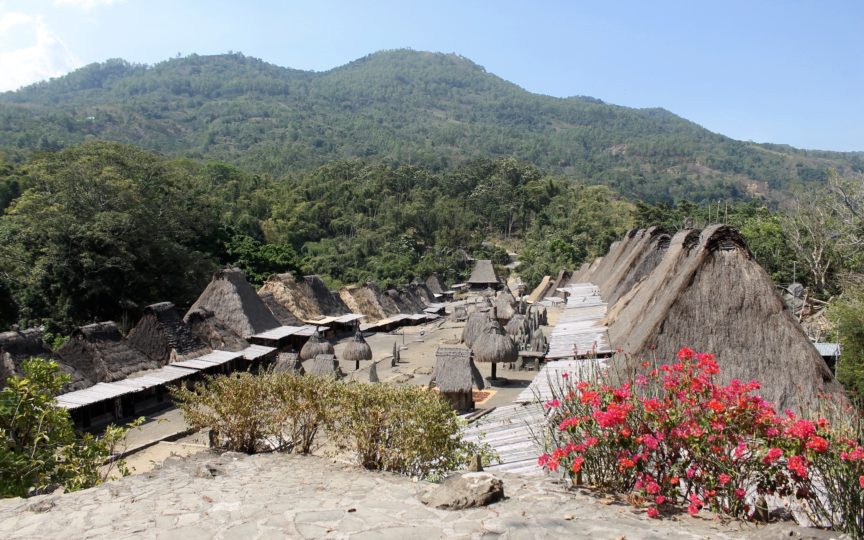 Step back in time at Bena & Wogo traditional Indonesian villages, just outside Bajawa – find out what to expect when visiting & why we preferred it to Wae Rebo.When city life in Bajawa gets too much, rent a motorbike & get away from it all, stepping back in time to the old traditional Indonesian villages of Bena & Wogo – just as we did here at DIY Travel HQ.

Motorbikes can be rented from from hotels in Bajawa for 150,000 IDR.

Overnight homestays are available at Wogo, possibly at Bena too.

From Bajawa, a scenic 19km drive through bamboo forests leads to Bena, a megalithic village at the foot of Mount Inerie.

Before entering the Bena traditional village, you’ll need to: 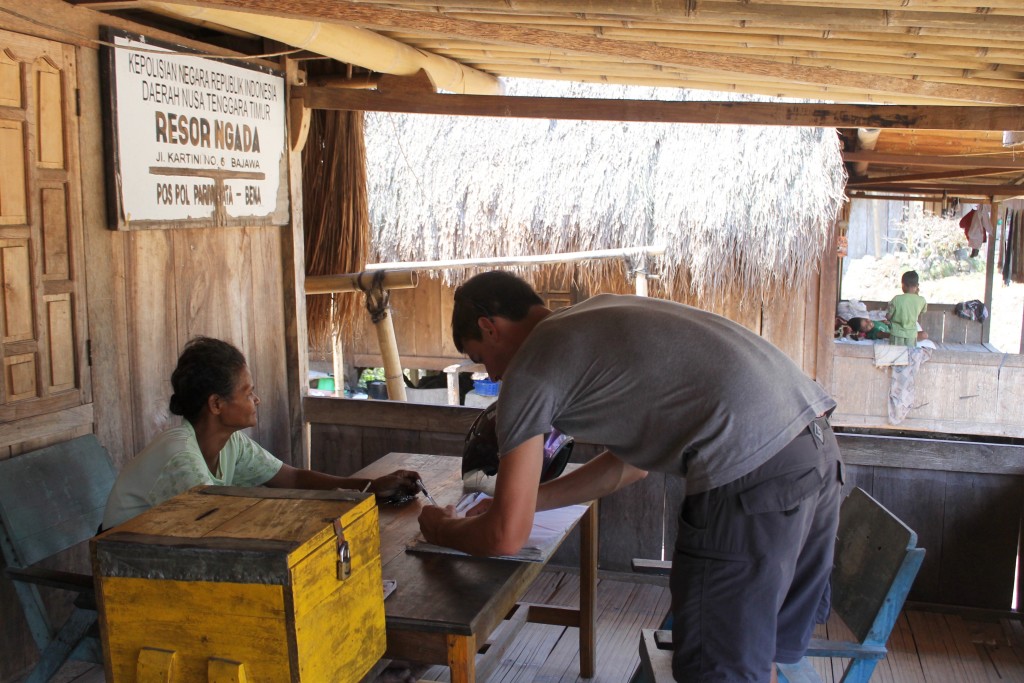 Then take the stone steps leading up to multiple levels, on which high thatch-roofed houses are built around giant stone formations – these are said to be signs of worship to the mountain, whose gods protect the village.

Indeed, many ancient rites & customs are still practiced at Bena, around ancestral shrines & altars, also made of stone. 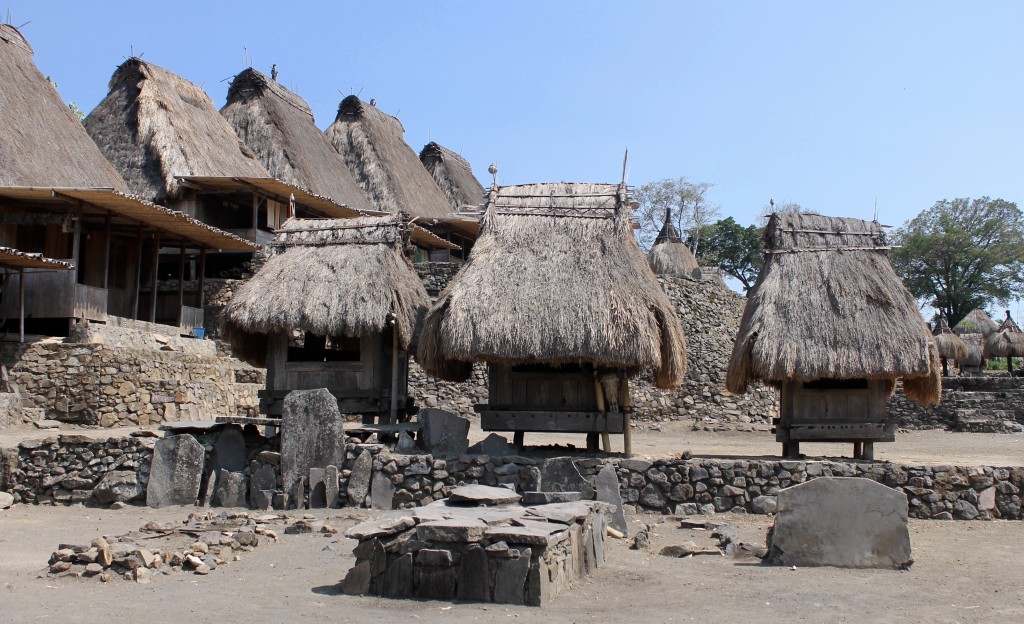 Stone shrines & altars in the middle of Bena village

Bena is inhabited by a tiny clan, who live with tourism in their front yard.

The villagers go in & out of their homes, weaving on their porch steps or drying fruits & seeds out in the sun. This is their way of life & some locals are happy to interact with tourists, & may even invite you into their homes.

Their Ikat handicrafts & produce are available for sale, proudly hanging on the walls of their homes, alongside ox skulls & pig bones.

Be sure to go up to the very top level – the views of the village are remarkable: 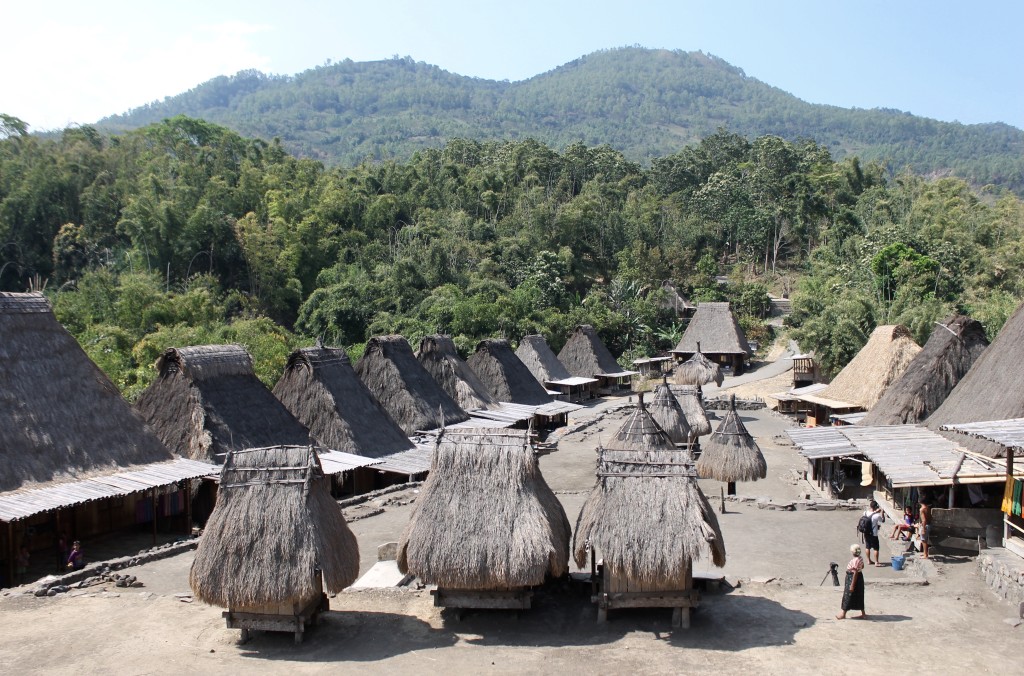 Bena Village at the foot of Mt Inerie

A good balance has been reached at Bena traditional village.

It requests, not demands, a donation from visitors, unlike the mandatory & exorbitant 200,000 IDR / $15.00 charged for hiking Wae Rebo. Plan ahead so you can decide what is worth visiting when creating your Flores itinerary.

The tourism dollars have clearly been well-spent on maintaining the site & providing facilities (there are toilets), along with better living conditions for the community. 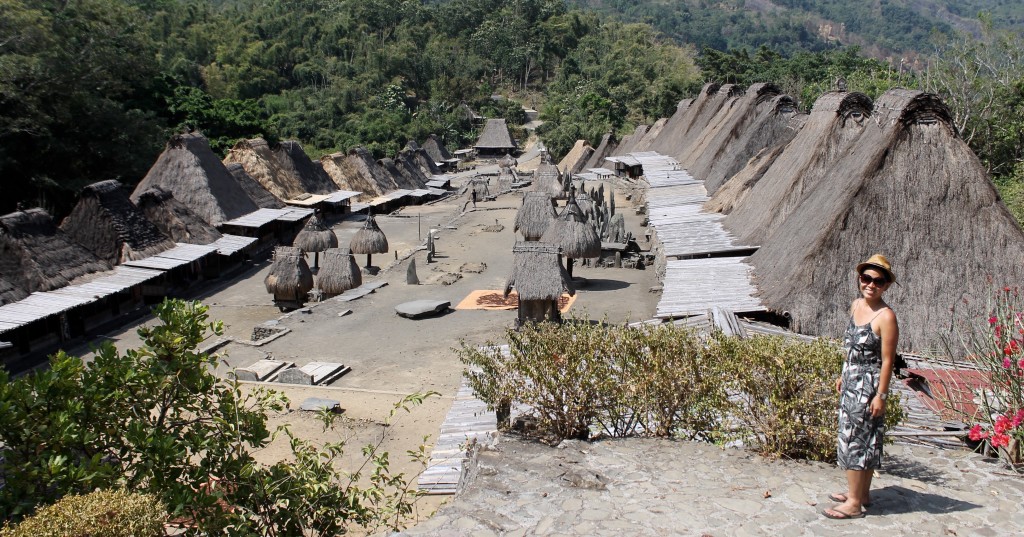 Sure, Bena can seem a little too perfect, a little too staged for an Indonesian village – but at the surface at least, it’s a great example of how cultural tourism & traditional lifestyles can work in harmony. 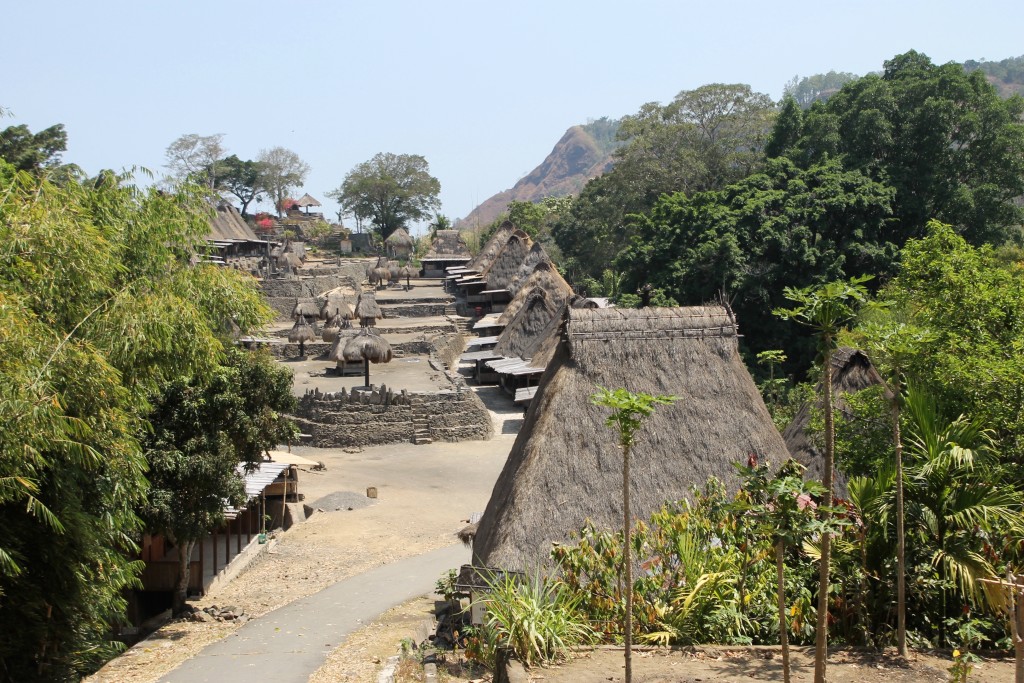 Wogo village has only been around since 1932, when the people from Old Wogo decided to leave their original village & resettle here, closer to town.

That, or Old Wogo simply burned down.

Finally arrived! After many lost turns, too excited to even take off the helmet!

New Wogo is built in the same manner as Old Wogo, with the traditional U-shape layout. 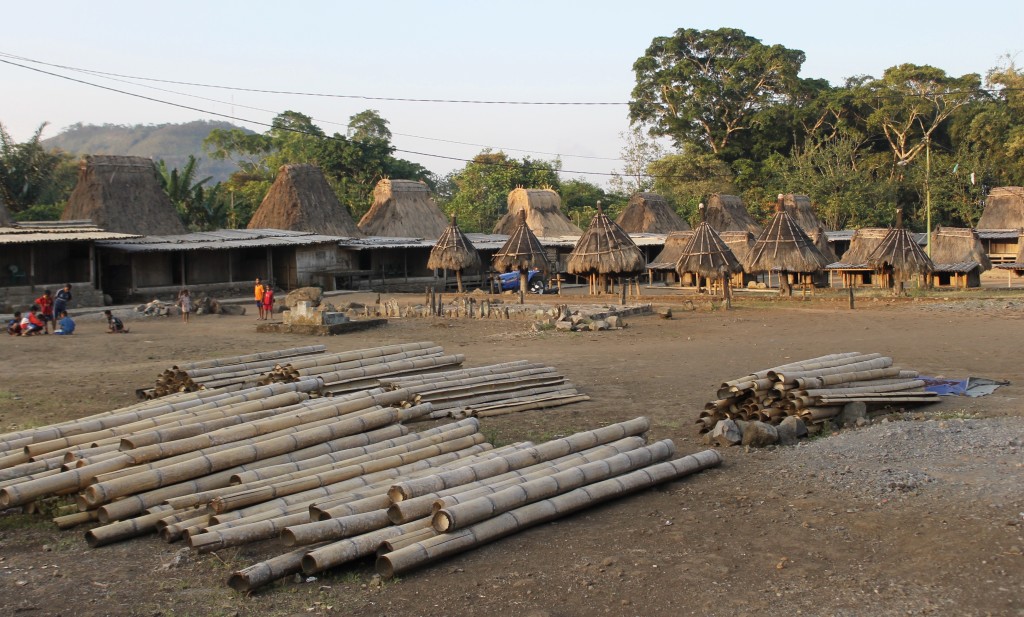 Homes are built around a large open field

Like Bena, Wogo is another old Ngadanese village, where people still practice traditional animalist beliefs with touches of Christianity. 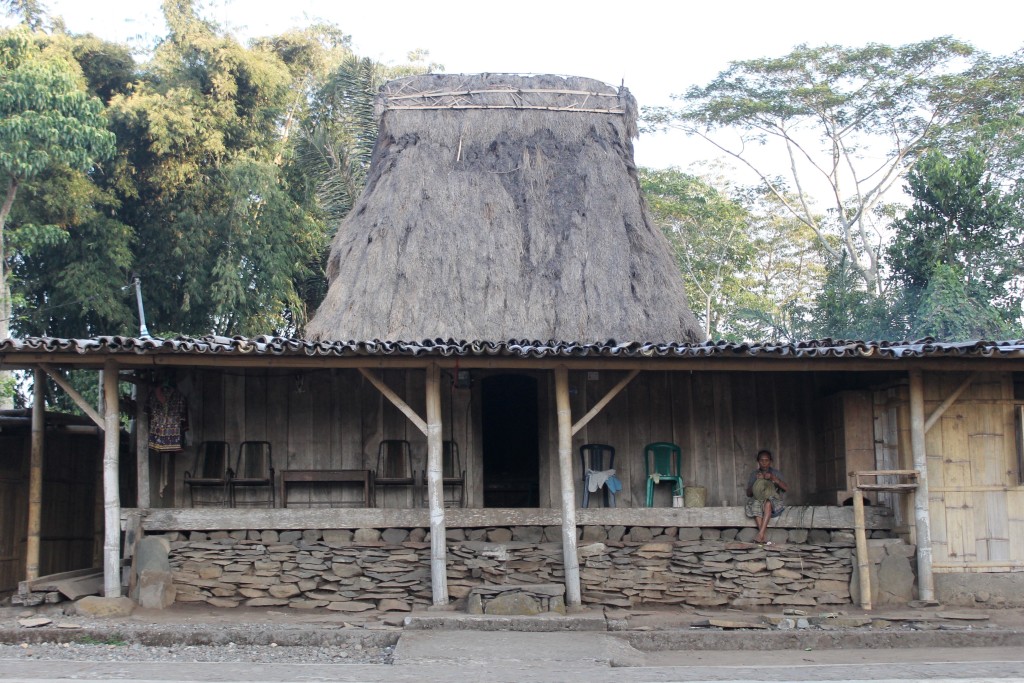 One distinct difference between these 2 Indonesian villages, however, is the presence of the many kids playing outside in Wogo.

In Bena, there were no kids, however they could’ve been in school while we visited in the morning (we visited Wogo in the late afternoon, after school time).

Nevertheless, there isn’t much space for kids to play in Bena, whereas in Wogo there’s a large open area in the middle of the village. 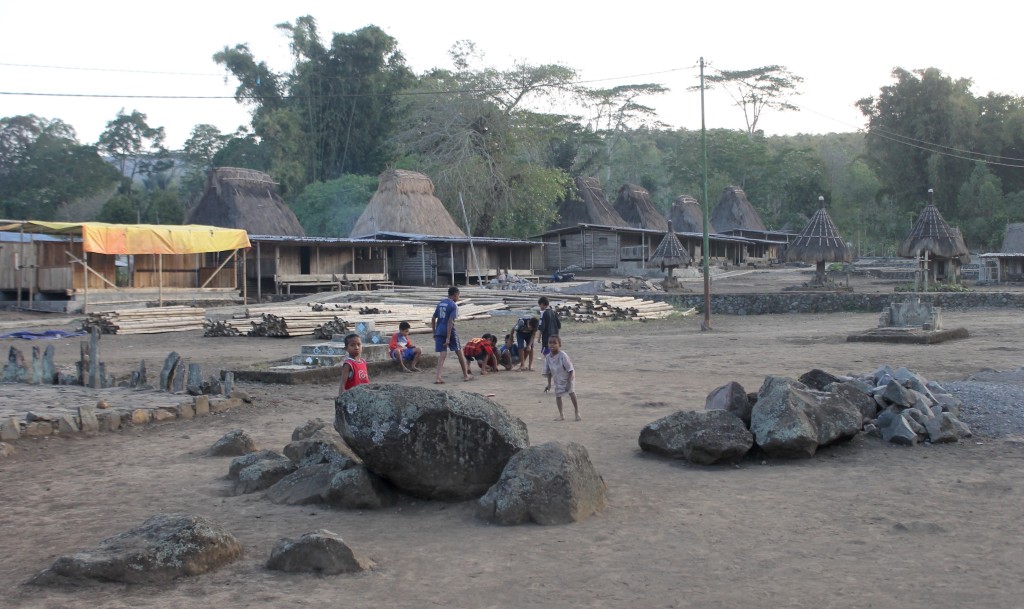 Unlike Bena, there’s plenty of room for children to play at Wogo

Along with the presence of children comes an all-together more friendly & warmer atmosphere.

At Wogo, the people were very welcoming, a little too eager to show you their homes, for a fee we suspected – after all, they too have cable subscription fees to pay: 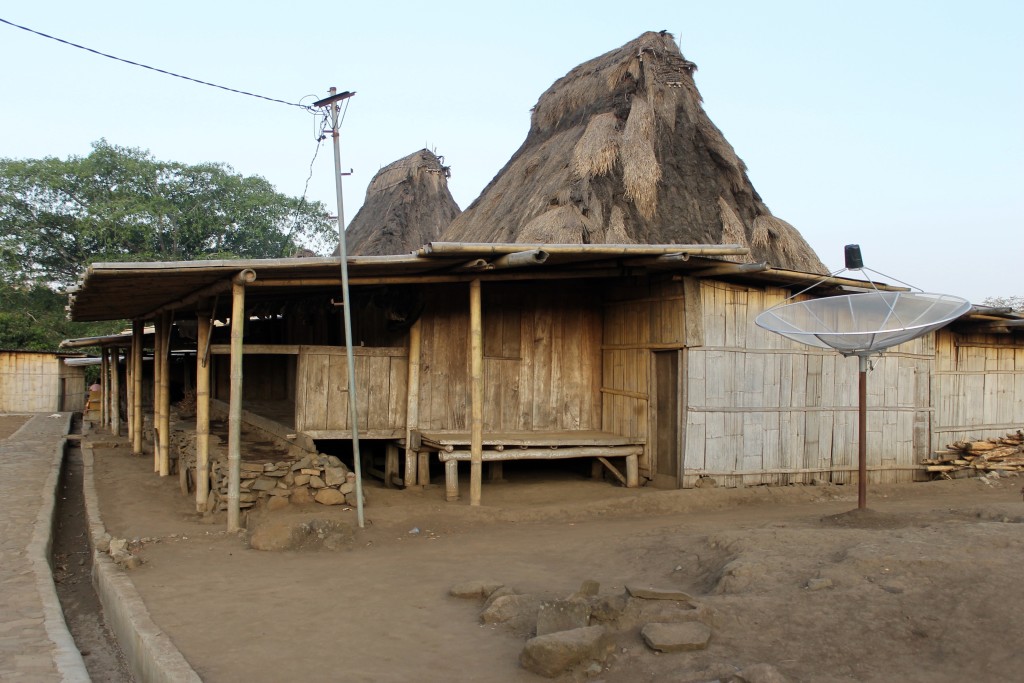 Cable TV can be found in the most unlikely places!

After completing a lap around the village, sign the guestbook, leave a donation & take your final photos! 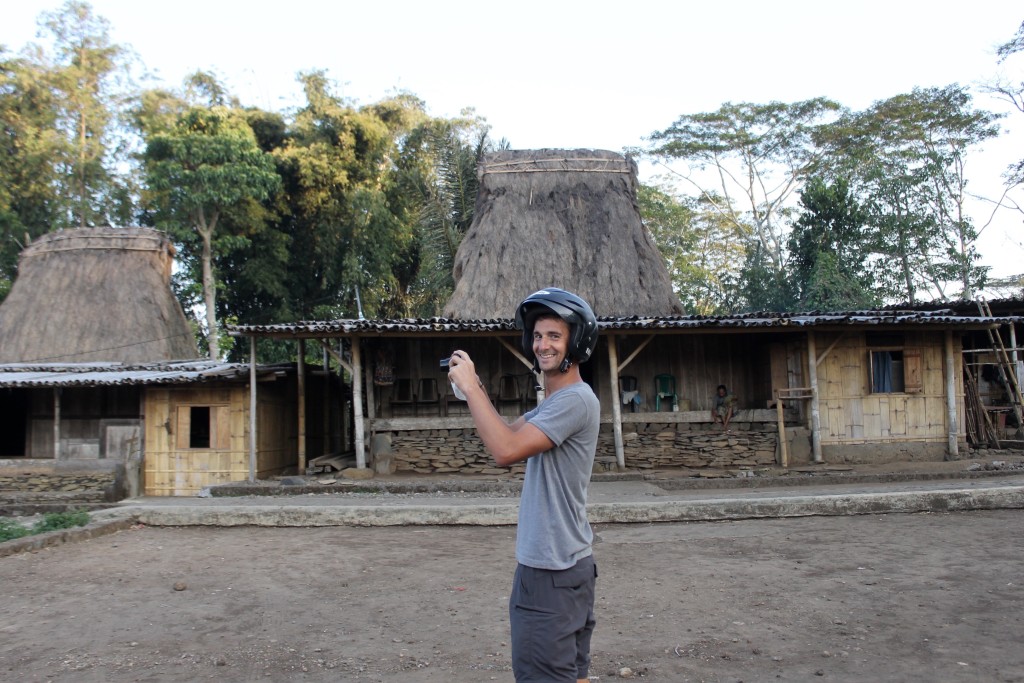 Overall, with dirt instead of stone, on the floor instead of raised, Wogo village had a much more family, lived-in community feel.

In comparison, Bena was showcased almost like a display home-village!

*** The Final Word: A visit to Bena & Wogo makes a lovely day trip from Bajawa to 2 distinct, traditional Indonesian villages ***

Do you prefer Bena or Wogo village?